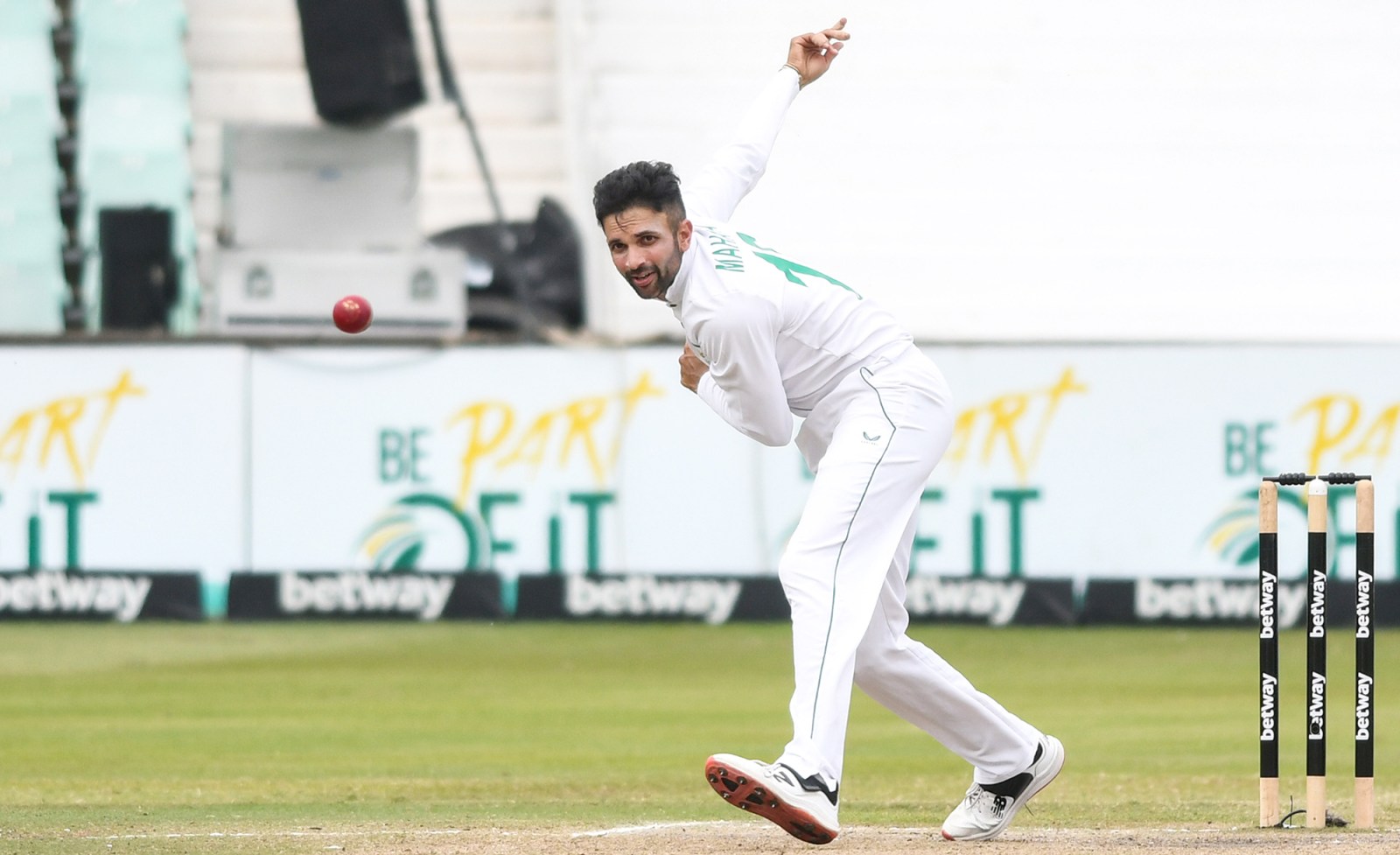 It was a rare sight throughout this Test to see two South African spinners operating in tandem. It was rarer still to see them open the morning’s play on day five when the light was good enough for seamers to operate.

But that is the changing image of the Proteas team. They are not a “paint by numbers” outfit any more. Conditions and circumstances played a role in captain Dean Elgar choosing to employ spin twins Keshav Maharaj and the returning Simon Harmer through the Test, but he could have gone in another direction.

As it turned out, the spinning duo captured 14 of the 20 wickets South Africa took to win the first Test by 220 runs under gloomy skies at Kingsmead. They bowled 96 of the 136.5 overs South Africa bowled in the match.

Maharaj’s second innings figures of seven for 32 were his best at home as he and then Harmer ripped through the tourists’ batting. It required just 13 overs on day five for the Proteas to claim the seven wickets they needed for victory after Bangladesh resumed on 11 for three.

They were eventually rolled for 53 — the lowest innings total yet at Kingsmead — as Maharaj and Harmer (three for 21) picked up all 10 Bangladesh second-innings wickets between them.

It was the first time spinners took all 10 wickets in a Test innings for South Africa since Hugh Tayfield (seven for 23) and Tufty Mann (three for 31) against Australia in Durban 72 years ago. It was also the first time South Africa had selected two recognised spinners in a home Test since 1970.

Bangladesh though, would not go quietly. The Bangladesh Cricket Board (BCB) has lodged a formal complaint with the International Cricket Council (ICC) over the quality of the umpiring.

South Africa’s Adrian Holdstock and Marais Erasmus were the men in the middle. They were overruled several times on referral, but the BCB’s inference that there was bias, smacks of desperation.

The BCB also complained to the ICC that South African players sledged Bangladesh players, although the nature of the remarks has not been made clear.

The Proteas themselves were unhappy with some of the umpiring during the match, with eight decisions overturned by the decision-review system.

It certainly wasn’t the best outing for the umpires in difficult conditions, but Bangladesh might better spend their energy focusing on batting issues.

For Maharaj, it was a personal triumph on his home ground, just a few kilometres from where he went to school. It was his eighth five-wicket haul in Tests and his first at Kingsmead and the first by a South African spinner at the ground in the post-isolation era.

Maharaj doesn’t always receive the accolades he might, considering he’s often the fourth or fifth bowler in a country that places more emphasis on pace than spin.

But he’s quietly become a vital cog in the wheel and is now South Africa’s leading spin wicket-taker since readmission, with 141 Test wickets. He’s also played white-ball cricket for the country and is a more than useful lower-order batter — including in this Test where he scored 19 in the first innings in a 53-run eighth-wicket stand with Temba Bavuma.

Spin bowling, particularly in South Africa, is a tough job and opportunities such as those the Kingsmead pitch and the conditions presented, don’t come around often. Maharaj and Harmer unsurprisingly didn’t waste them.

“I understand that you’re not going to get wickets all the time. I was in a good space in terms of the way I felt the ball was coming out,” Maharaj said after the match. “It does get a bit frustrating not getting rewards.”

All that frustration broke through the surface with the spinner close to tears as he produced one of his best performances, in front of his father and other family members. Some of his wicket celebrations were wildly joyous. Weaving his magic at Kingsmead clearly meant more than anyone will know.

“I love playing cricket at Kingsmead. Kingsmead is my home,” Maharaj said. “To have my family witness me help the team over the line is even more special to me.”

Unfortunately for the pair, the sight of two spinners in South Africa is likely to remain rare. With fast bowlers Kagiso Rabada, Lungi Ngidi, Marco Jansen and Anrich Nortje unavailable due to Indian Premier League commitments, the dual spinning option won’t be a staple.

Elgar admitted the situation was unusual and unlikely to continue in places where the conditions don’t allow for it.

“It’s not the style of cricket we are generally used to or want to play. We still want to play highveld cricket where you are playing three seamers, an allrounder and a world-class spinner and have that style where fast bowling is our prime source of attack,” Elgar said.

“It shows a lot of character with regard to adapting and being put in conditions we are not familiar with. It also shows a lot of strength within our group that we have the resources to adapt.

“We play quite a lot of cricket in the sub (continent). It was great to expose our bowling attack to having two spinners operating in tandem. There are so many positives out of that. There’s a lot of good things that happened in the last five days.”

Harmer’s first Test appearance for seven years after he chose to further his career in England as a Kolpak player, was a triumph. He dominated the domestic scene in the early part of the summer and was in the Test setup for the India and New Zealand series, without playing until now.

He offered so much control with the ball and underlined what an asset he could be in the months and years ahead. Maharaj was the first to acknowledge his impact on the team.

“Having Simon (in the squad) is a good thing,” Maharaj said. “It’s nice to learn how he sees things and I would think he likes to learn how I see things.

“He is good to have in the changeroom, he is lots of fun, he’s got good ideas and he has matured a lot as a cricketer. We can see the way he is bowling, it’s world class — his shape on the ball, his trajectories, his lines and lengths and also the way he thinks about things on the field is quite remarkable and an asset to this team.”

One of the consequences of the IPL call-ups has been that it has forced South Africa to deeper mine its player pool. And to think differently about how they approach games and personnel.

Two spinners won’t necessarily become the norm, but this Test also showed that if both are high quality, it’s an approach that doesn’t need to be feared.

“The only way you get a taste or a feeling (for international cricket) is by exposure. We are getting there with regard to exposure, but we are not there yet,” Elgar said.

“We’ve still maybe got a season or two to go that can really reassure our minds of being 100% confident with regard to having quite a big pool of players. It’s still a work in progress. In saying that, guys have experienced Test cricket and what it demands and the kind of cricket you have to play to get a victory.”

The second Test starts in Gqberha on 8 April. DM