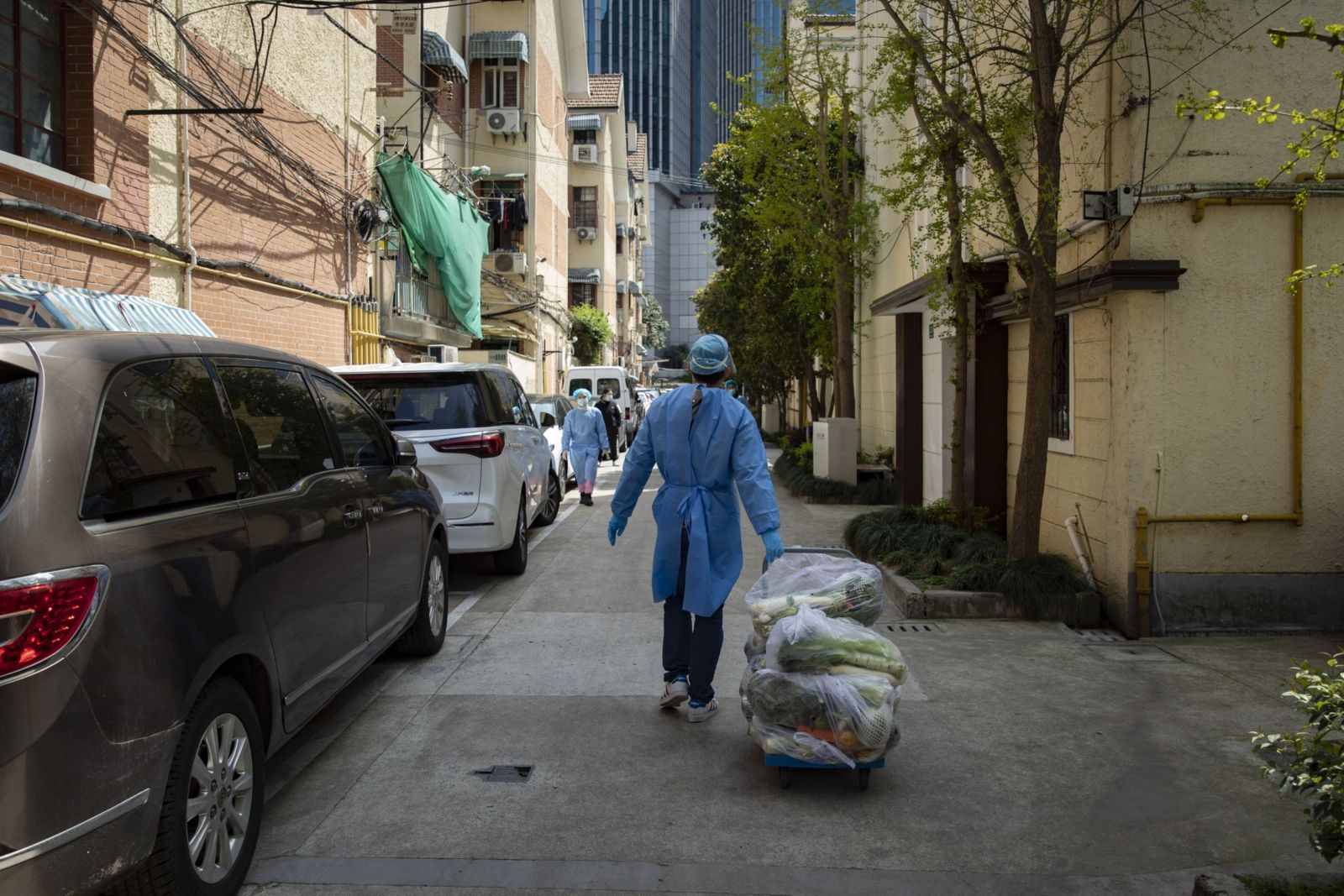 Neighborhood volunteers transport bags of vegetables delivered by the government during a citywide lockdown due to Covid-19 in Shanghai, China, on Sunday, April 3, 2022. Shanghais 25 million residents are almost all under some form of lockdown as the financial hub struggles to contain the coronaviruss highly contagious omicron variant. Photographer: Qilai Shen/Bloomberg

China’s Covid-19 situation is on a knife’s edge, with a lockdown of its financial hub intensified amid a surge in new cases and reports of new sub-strains of the omicron variant emerging as clusters flare nationwide.

The country, which managed to live much of the pandemic effectively virus free after quashing its initial outbreak in Wuhan, is experiencing its biggest jump in daily infections since that period.

Shanghai reported 9,006 cases on Sunday as the city readies to test all 25 million residents in its latest efforts to weed out infections, amid accounts of unreported deaths in a nursing home and ongoing food shortages. The entire population is now under some form of movement restrictions.

Thousands of medical staff from around the country arrived in Shanghai on Sunday to help with the city-wide test, Xinhua News Agency reported. The People’s Liberation Army has also mobilised more than 2,000 military medics to support Shanghai’s virus control, according to the PLA Daily.

Businesses and some factories remain shuttered, with Tesla Inc.’s Shanghai plant – its first Gigafactory outside of the US – entering a second week of disrupted operations.

Adding to concern about the situation is the emergence of what appears to be new sub-types of the highly contagious omicron strain.

A Covid patient in a city some 64km from Shanghai was diagnosed with a new iteration of the virus that evolved from the BA.1.1 branch of omicron, the state-run Global Times newspaper reported at the weekend, citing sequencing data from local health authorities. The report said the sub-type doesn’t match other strains in China, nor those submitted to GISAID, the global database for coronavirus sequencing and monitoring mutations.

A case in Dalian city in northern China reported on Friday also didn’t match any coronavirus found domestically, the municipal government said on its WeChat account.

With the situation spiraling, Beijing sent Vice Premier Sun Chunlan to Shanghai to oversee prevention efforts. Sun ordered local officials to curtail the outbreak “as soon as possible,” indicating China remains wedded to its rigid Covid Zero stance despite the escalating crisis. For much of the pandemic the nation has sought to eliminate the virus, something that’s become more challenging as the pathogen mutated to become more transmissible, evading even the toughest border curbs and quarantine regimes.

Still, in further evidence Beijing is at least planning for an eventual exit from the strategy – which has left it isolated as the rest of the world opens up – two Chinese vaccines using messenger RNA technology, or mRNA, were approved to start clinical trials. More effective vaccines are seen as key to China being able to normalize without a high number of virus deaths, political anathema to President Xi Jinping’s government.

Read about how China’s exit from Covid could play out

China is the last country in the world to still be taking such a hard line with Covid, after other places that pursued elimination, including Singapore, Australia and New Zealand, started to open up once vaccination reached key levels.

The experience of Hong Kong is providing a cautionary tale for mainland officials, with the city going from virus success story to the highest death rate in the world at one point. Hong Kong didn’t lock down and mass test its population, despite Beijing’s urgings, and cases rapidly exploded into the tens of thousands within days, triggering an unprecedented wave of death mostly among the under-vaccinated elderly community.

China’s elderly vaccination rates are better than Hong Kong’s, but still low by global standards, particularly among the very old. Just over half of those aged 80 and older are fully vaccinated against Covid in China, officials said on March 18, before launching a push to get more older people to get shots. BM