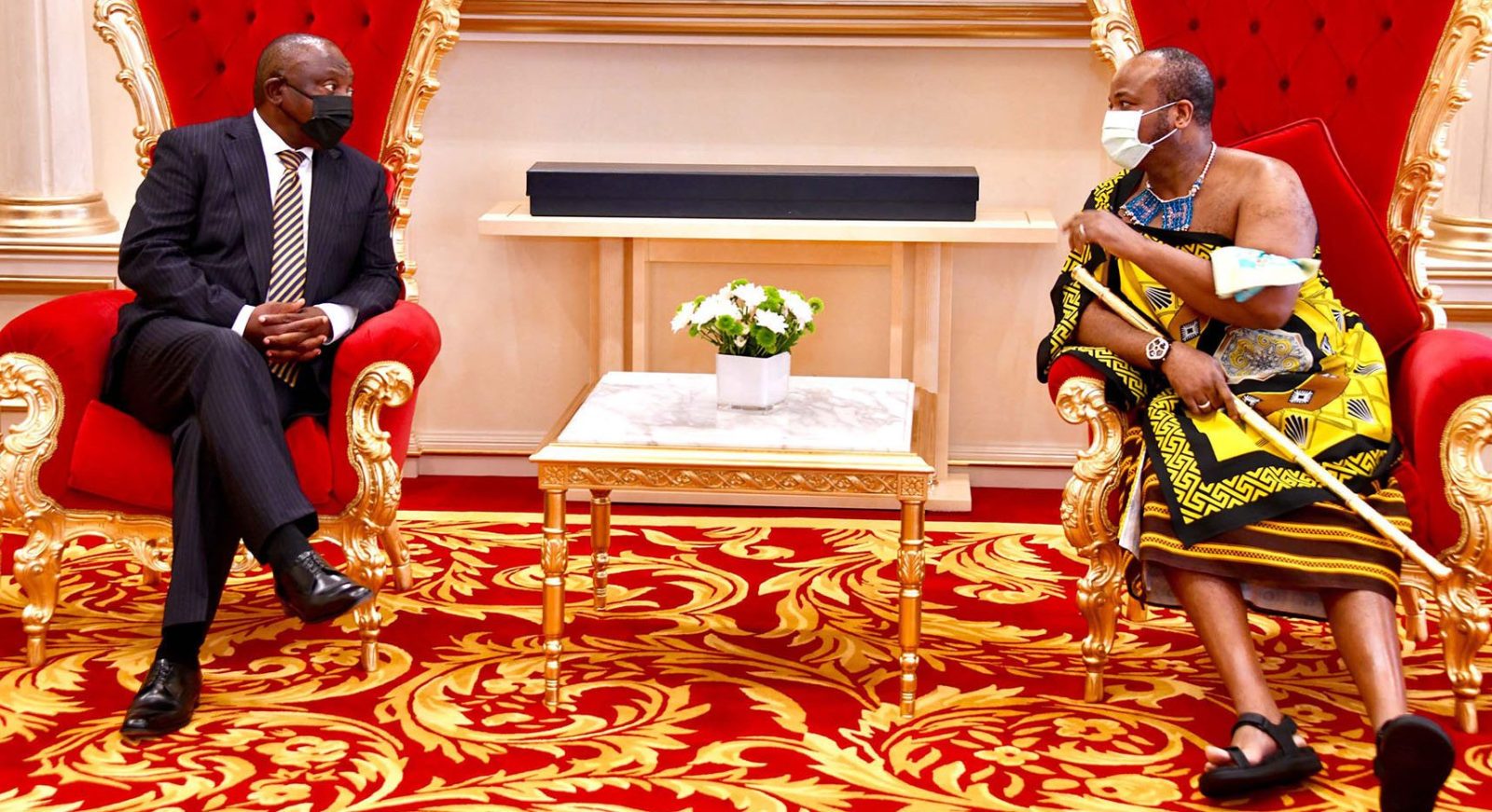 President Cyril Ramaphosa with King Mswati III at the Royal Palace in the Kingdom of Eswatini on 2 November 2021. (Photo: Elmond Jiyane / GCIS)

In the absence of discussion of Eswatini, the SADC troika ministers' meeting on Sunday focused entirely on SADC’s Mission in Mozambique (Samim). An analyst expressed concern that SADC’s military intervention in Mozambique is being imperilled by a lack of resources.

Swazi king Mswati pulled his country off the agenda of a regional meeting in South Africa on Sunday, 3 April, which was held partly to address the growing crisis in Eswatini and a national dialogue that has been proposed to address it.

The king’s last-minute move has raised concerns that he may be determined to conduct the proposed national dialogue on his own terms — despite his agreement with President Cyril Ramaphosa in November last year to accept the involvement of the regional Southern African Development Community (SADC) in setting the terms of the political dialogue.

The SADC’s security organ troika was scheduled to meet on Monday, April 4, with Ramaphosa in the chair, to discuss both the Swazi national dialogue as well as SADC’s military intervention in northern Mozambique against an Islamist insurgency.

But the summit was postponed over the weekend without a new date being set.

Foreign ministers met in Pretoria on Sunday anyway to prepare for the summit. Naledi Pandor, South Africa’s international relations and cooperation minister, told the meeting the summit had been postponed because Mozambique’s President Filipe Nyusi and Botswana’s President Mokgweetsi Masisi could not make it.

Pandor did not explain why Eswatini had been removed from the original agenda of the ministerial meeting, but one official source told Daily Maverick this had been done at Mswati’s request. He apparently told Ramaphosa he needed more time to consult internally about the dialogue.

It was not clear if Mswati would attend the postponed summit, which officials say is now likely to be held on 13 or 14 April.

On Sunday, after Eswatini had pulled out of the SADC meeting, a senior South African official expressed concern that South Africa’s and SADC’s credibility were now in jeopardy.

Pretoria, however, is still holding out hope that Ramaphosa and the two other members of SADC’s security organ troika — Masisi and Namibian President Hage Geingob — will be able to sit down with Mswati and persuade him to launch a credible national political dialogue.

Inside Eswatini, pro-democracy political and civic organisations are growing increasingly strident in their criticism of what they see as the intention of Mswati’s government to hold the proposed dialogue entirely on its own terms. This would take the form of “Sibaya”, which is a traditional meeting between the king and the people where he generally does all the talking and they just listen. The democratic opposition has rejected this as a “monologue, not a dialogue”.

Headed for a violent confrontation

Thulani Maseko, a human rights lawyer who heads Eswatini’s Multi Stakeholders Forum, said the SADC needed to be firm and decisive in impressing on Mswati that the national dialogue should begin.

“At the very least, let there be a discussion on the terms of reference for the dialogue,” he told Daily Maverick.

The Multi Stakeholders Forum, representing pro-democracy political and civic organisations, has been demanding that a fully representative body should draft the terms of reference for the dialogue.

Maseko said it would be “most distressing” if SADC had agreed to a request from Mswati not to participate in the SADC summit discussion on Eswatini.

This would “give the unfortunate impression that SADC is allowing the king to dictate the pace, time and logistics to the dialogue. We are deeply concerned about the escalating violence from all sides. This is gradually escalating into a violent confrontation that might end up being a full-scale civil war. Yet violence is never a solution.

“We may not know the reason for the king’s request to remove Swaziland from the agenda and the postponement. It may well be that he is preparing to retaliate as he has long said the sporadic attacks [in Eswatini] are ‘a direct attack on the king’,” Maseko said. “Absent of any meaningful process, chances are that we are headed for an unfortunate deadly, violent confrontation. We appeal to the troika to step up.”

In the absence of discussion of Eswatini, the SADC troika ministers’ meeting on Sunday focused entirely on SADC’s Mission in Mozambique (Samim). This is a military intervention force that has been in the country since July last year to try to eliminate the Islamist State-affiliated jihadist group Al-Sunna wa Jama’a (ASWJ) — known locally as Al-Shabaab — which has been terrorising parts of northern Mozambique since October 2017.

Officials said the ministers confirmed the SADC summit decision of January to extend Samim’s mandate from 15 April to 15 July. They also agreed to recommend to the SADC troika heads of state that from July Samim’s mandates should be extended by a year at a time instead of the three-monthly extensions that have been mandated to date.

As Pandor told Sunday’s meeting, the January SADC summit had also agreed that Samim’s mission would “de-escalate” from its Scenario 6 mandate, under African Union (AU) rules – which means a full-enforcement mandate – to a Scenario 5 mandate, which means more of a peacekeeping mission.

This change of mandate was apparently in the light of the “encouraging progress” made so far in Samim’s mission “which has brought stability to most areas”, Pandor said. She also acknowledged that Samim continued to face challenges, including the fulfilment of pledges of capabilities, particularly provision of the additional resources needed to move to Scenario 5.

Pandor also noted that the Samim intervention required support from the AU and international cooperating partners. She welcomed the European Union’s approval of funding for Samim from the AU’s Early Responses Mechanism.

SADC Executive Secretary Elias Magosi, however, explained to the meeting that the EU funding was only to address non-military interventions, such as supporting women and youth-empowerment initiatives as well as capacity-building programmes for police and correctional services. Other officials said this EU funding amounted to about €1.8-million.

‘Counterinsurgency on the cheap’

Piers Pigou, southern African analyst at the International Crisis Group, expressed concern that Samim was being overstretched as its resources were still not matching its mandate. He suggested that SADC had carefully “choreographed” the official de-escalation of Samim’s mandate from Scenario 6 to Scenario 5 as the situation on the ground did not indicate that the aggressive enforcement phase of the mission was nearly over.

Pigou also suggested that the apparent determination of the SADC countries involved in Samim to fund the military intervention themselves was jeopardising the mission. He noted that despite having about 1,600 to 1,700 troops in northern Mozambique, Samim was suffering from a lack of vital air support to those troops. This meant, for example, that it was extremely difficult for Samim troops to conduct hot-pursuit missions against ASWJ insurgents beyond roads and into the bush.

There have been a few attacks by ASWJ close to Samim bases that Samim has been unable to respond to. Pigou noted that South Africa had Rooivalk attack helicopters that would be ideal for providing the necessary air support – but that these were expensive to operate. “Yet can we continue to conduct counterinsurgency on the cheap?” he asked. “Is this force fit for purpose?”

Pigou said the danger of not aggressively pursuing ASWJ to its bases in the bush was that this was allowing the insurgents to regroup after every attack — and to attack again. He said he believed the EU was ready to finance Samim’s combat operations, but that the SADC seemed to have a political objection to allowing the EU to intervene so deeply into regional security affairs.

That could be changing. A South African official told Daily Maverick that the EU was now ready to also fund Samim’s military operations and the SADC was waiting to hear more details of the offer from Brussels. DM