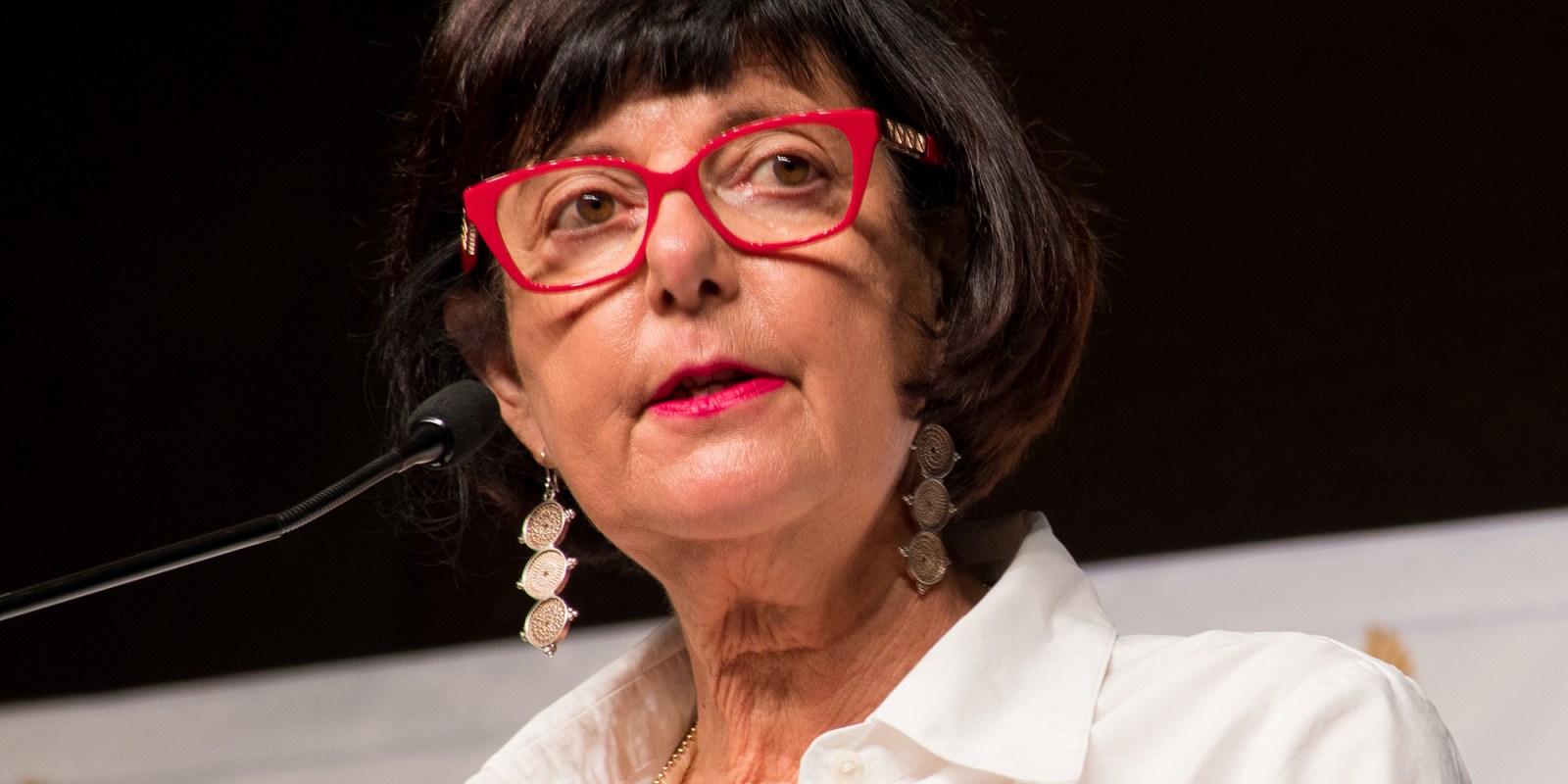 Minister of Forestries, Fisheries and the Environment Barbara Creecy at the 9th People and Parks Conference at the Sandton Convention Centre, 31 March 2022. (Photo: Julia Evans)

Environment Minister Barbara Creecy has highlighted how engaging with local and indigenous communities can benefit economic potential and protect biodiversity.

‘If we want to succeed in assisting communities to benefit from the protected estate, we have to do things differently. And that means entering into what is known as the ‘new deal’ for people and nature,” said the minister of forestry, fisheries and the environment, Barbara Creecy, when she opened the ninth People and Parks Conference in Sandton on Thursday.

In her keynote address, Creecy emphasised the need to work with local and indigenous communities to protect biodiversity and play a role in the wildlife economy.

The conference is a biennial event hosted by the Department of Forestry, Fisheries and the Environment (DFFE) in partnership with the Department of Agriculture, Land Reform and Rural Development and focuses on the interface between communities and conservation.

The People and Parks Programme was born out of the World Parks Congress held in Durban in 2003, where a decision was taken that people living in and around protected areas should participate in the management of protected areas.

Creecy highlighted the economic development that had occurred through the Biodiversity Economy programme, such as plans to implement pilot projects on bioprospecting in 19 traditional authorities in the Eastern Cape and Limpopo, which Creecy said would result in 2,455 community members getting temporary relief opportunities through the Presidential Economic Stimulus.

Additionally, R1-billion has been invested in infrastructure in protected areas, including more than 50 projects in all provinces that are projected to create at least 23,000 jobs in the next two years.

While acknowledging the impact the climate crisis has and will have on agriculture and food security, Creecy said, “As we confront the crises of climate change and the fact that the microclimates in many areas of our country are becoming increasingly unconducive for cattle and sheep production, we do need to think about the production of different forms of livestock.”

“The growth of the game meat industry, if properly developed through the economies of scale and transformed from a mostly informal sector to a formal one, could lead to much-needed socioeconomic development in parts of rural South Africa,” said Creecy.

She gave the example of how mixed farming models could allow communities and land claim beneficiaries to gain more value from their land — such as communally-owned land that is currently used for intensive cattle grazing to be used for grazing plains game such as antelope.

Importance of engaging with indigenous communities

Creecy said that the report from the high-level panel on the management, breeding, hunting, trade and handling of elephant, lion, leopard and rhinoceros handed to her in May 2021 gives us a clear pathway on how to address key sector challenges.

Creecy said the report indicated “the need for a shift to an Africanised conservation approach, that embraces the diverse cultures, traditions, and knowledge systems in South Africa, and values such as ubuntu”.

The latest report from the Intergovernmental Panel on Climate Change, released earlier this year, highlighted how African indigenous knowledge and local knowledge systems provide a rich foundation for adaptation actions at local levels.

This is because African indigenous knowledge systems are exceptionally rich in ecosystem-specific knowledge and can enhance local participation in implementing adaptation measures.

The high-level report highlighted how increasing communities’ access to protected areas can be done through communities’ small, medium and micro enterprises, especially ecotourism-based ones.

Speaking of tourism, later on Thursday afternoon at the SANParks tourism investment summit, Creecy emphasised how SANParks can create opportunities for communities who live near national parks, which in turn can help conserve our biodiversity.

While addressing the tourism summit, Creecy referred to the People and Parks Conference: “And what was top of mind in that particular event is how these communities can benefit from the protected areas, and how we can help those communities to recover from the pandemic and work on the extreme conditions of poverty and unemployment that are existing in most communities.”

She explained that in some areas, national parks are communities’ only source of employment, with SANParks employing more than 6,000 people, including concessionaires.

When asked after the SANParks summit about the importance of engaging with local communities, Creecy told Daily Maverick: “You’ve either got to ensure that communities living on the outskirts of the parks benefit officially from conservation, or you’ve got to accept that [they’re] going to benefit unofficially.”

By benefiting unofficially, Creecy meant that locals will turn to illegal or ecologically damaging activities for a source of income or to secure food security, such as poaching or the snaring of animals.

Creecy mentioned how the high-level report highlighted concerns over human-wildlife conflict for communities living adjacent to protected areas. As a result, the DFFE has initiated a large Global Environment Facility-funded project to resolve these issues, with consultation for the implementation under way.

Creecy said that the DFFE has found that when it comes to poaching in the Kruger National Park, young men living on the outskirts of the park are recruited by syndicates.

“So the people who are doing the actual rhino poaching are just foot soldiers,” said Creecy, adding that these men are the ones who either get killed or arrested and imprisoned.

“So I think that there’s a moral obligation on us to enhance the benefit that communities surrounding us receive,” said Creecy. DM/OBP