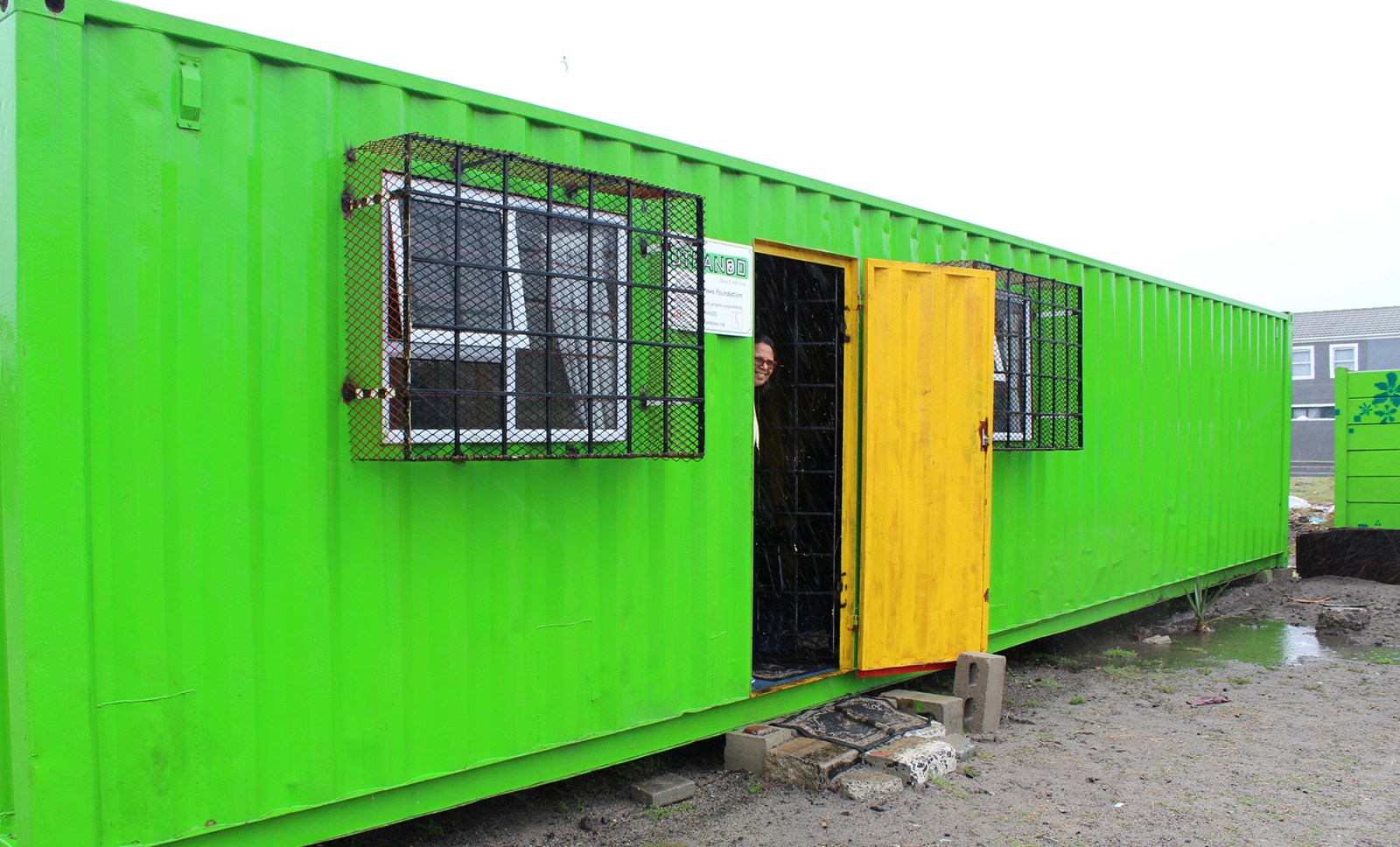 The Alcardo Andrews Foundation moved the shipping container from which it runs its community feeding scheme to a piece of public land opposite its premises in Hanover Park on 25 February 2022. (Photo: Tamsin Metelerkamp)

The Alcardo Andrews Foundation, a non-profit organisation in Hanover Park, is trying to prevent City of Cape Town law enforcement from removing a shipping container it placed on public land without authorisation. The foundation runs a community feeding programme from the container.

The Alcardo Andrews Foundation is attempting to prevent the removal of a shipping container in which its members prepare meals for their community feeding project from a piece of public land in Hanover Park. They moved the container on to the land, which lies opposite their premises, without permission from the City of Cape Town on 25 February.

This came after numerous attempts by the foundation to obtain permission from the city to use or lease the land, dating back to 2019, according to Lesley Wyngaard, the spokesperson for the foundation.

The container needed to be moved, she said, as its previous location was too far from the foundation’s base, where the food is distributed. The foundation operates out of the home of its founder, Avril Andrews.

“We needed the container close to our base. Previously, we carted the huge 100-litre food pots with our vehicles,” said Wyngaard, adding that the choice to move the container was a “bold step” by the foundation that followed on from numerous emails and requests they had submitted to the city regarding the piece of land.

From Monday to Friday each week, the Alcardo Andrews Foundation provides meals for those members of the Hanover Park community who are in need of food, said Andrews.

The community feeding project began in 2016, with the foundation providing around 600 portions a day. This went up to about 1,000 portions during the Covid-19 pandemic when they had the support of other organisations.

“There’s always a need for food,” she said. “And what we find is, that’s why there’s so much illness, because people just give up hope, you know. We call it, in our terms, they have to skurrel every day. Skurrel means they have to make a way every day.”

“I met Avril Andrews in the hard lockdown of the pandemic. Many of our clients were facing more severe forms [of] hunger and food insecurity during the lockdown,” said Hermanus.

“Avril Andrews agreed to accept referrals from the Perinatal Mental Health Project. She also went as far as to say clients could fetch a sandwich on their way to the clinic when we noticed an increase in clients cancelling their counselling appointments due to hunger.”

Since the container was placed on the piece of public land, city law enforcement had been attempting to have it removed, said Andrews.

On 22 March, she was served with a notice of impoundment in terms of the Streets, Public Places and the Prevention of Noise Nuisances bylaw. The notice declared that the container must be removed from the city’s land by 1 April, or it will be removed by the City of Cape Town at the foundation’s expense.

“The City’s Law Enforcement Department was on site on Saturday, 26 February 2022. Officers spoke to the owner of the container and she confirmed she had no permission to place the container at the site,” stated the City of Cape Town.

“She indicated she would make arrangements for its removal. This has still not happened, in spite of the owner’s assurances to officers. A compliance notice was subsequently issued.”

The Alcardo Andrews Foundation was given seven days to provide law enforcement with written representation on the issue, said Wyngaard. They have since submitted a five-page report containing a “wad of evidence” on their past interactions with the city regarding the land and are awaiting feedback.

On 25 March, the Legal Resources Centre (LRC) submitted a letter to representatives of law enforcement and the City of Cape Town on behalf of the foundation. It requested that, in light of the essential community service provided by the foundation, the container remain where it is until they have been able to make representations to the city. To date, the LRC has not received a response to the letter, said Priyanka Naidoo, a candidate attorney at the LRC.

According to the report submitted by the Alcardo Andrews Foundation, a representative of the City of Cape Town told them in 2019 that there were no plans for the piece of land opposite their premises, nor services available on the land. The foundation submitted an application to use the land and received confirmation that this had been received on 4 October 2019.

In January 2020, the foundation was informed that the land was in fact earmarked for development and that they would have to work through the councillor for their area, Antonio van der Rheede, should they seek opportunities or a lease. When they contacted Van der Rheede, he told them that he could not change the plans for the land, according to the report.

To date, no development has taken place on the piece of land, as confirmed by Maverick Citizen when it visited the site in question.

The City of Cape Town confirmed that the Recreation and Parks Department was approached by the Alcardo Andrews Foundation in 2019 and that the foundation was informed that the Property Management Department needed to be consulted. However, the city has been unable to find any record of the application beyond that point.

“The Property Management Department encouraged the organisation to make an application on 16 March 2022, advising on the appropriate channels. An application to lease the land was subsequently received on 17 March 2022 and it is currently being circulated for internal comment,” stated the City of Cape Town.

The city refused to comment on future plans for the piece of land until the application process has been concluded.

Wyngaard said the only submission the foundation has made in the past month is the aforementioned report sent to city law enforcement. They have not sent in a new application to lease the land.

Maverick Citizen asked Van der Rheede about the plans for the land and how the current situation will be handled, but he declined to comment.

On 9 December 2021, James Fernie – the founder of Uthando South Africa and chairperson of the Harfield Village Association (HVA) – sent a letter to Van der Rheede and other city officials requesting that the Alcardo Andrews Foundation be permitted to relocate the shipping container to the piece of public land on a temporary basis.

Both Uthando and the HVA had started working with the foundation during the 2020 Covid-19 crisis, with Uthando raising the funds for the purchase of the shipping container.

Fernie argued that the container could easily be moved back to the Green Pasture Church of the Nazarene in Hanover Park, where it was originally located, should the city become ready to implement CBD upgrades on the vacant land. However, until that time, he advocated using the land for the community feeding project, as well as a vegetable garden.

“At the end of the day, surely everybody wants the same thing. They want to help a community that I think is sometimes very overlooked,” Fernie told Maverick Citizen. “And in the spirit of community building, all of the stakeholders should be looking at ways to engage and support each other.”

Additional benefits of the new location are that it is central and in a relatively safe area, meaning that non-profit organisations and individuals from Hanover Park and the surrounding areas could meet there to assist with the feeding project and address urgent challenges in the community, he said.

While Fernie’s request was denied, he remains hopeful for negotiation around the issue. “There’s enough fighting in Hanover Park. Let’s just put aside the differences. Let’s not look back, let’s look forward. Let’s look for solutions, not problems.

“South Africa is on the verge of a catastrophic food crisis. I mean… the price of food as it is, and now we’re talking about coming petrol price increases. Surely, absolutely everything possible should be done to support organisations like the Alcardo Andrews Foundation which have an existing feeding scheme. Because those lines are going to grow,” said Fernie. DM/MC