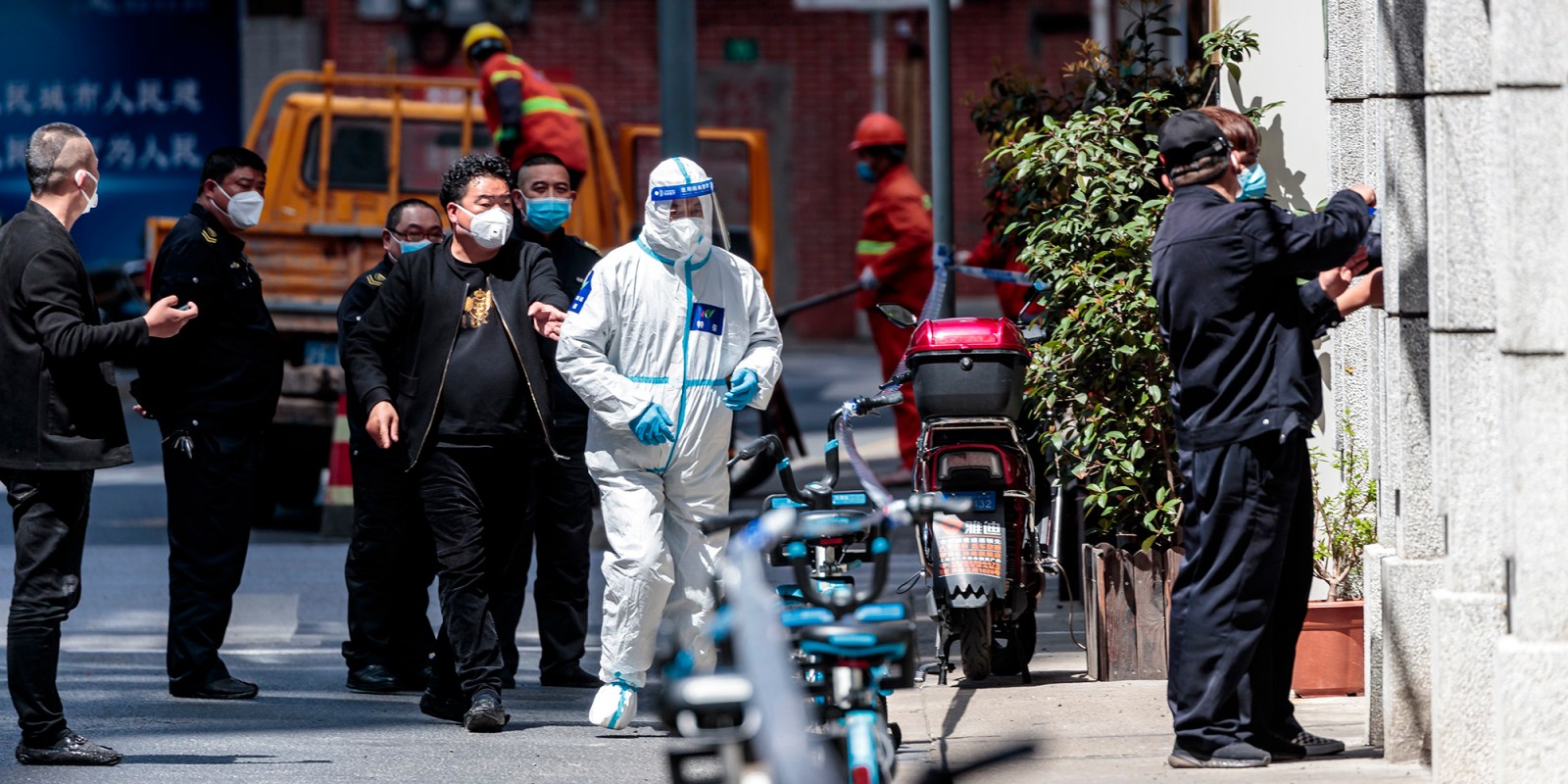 Officials lock down an area for quarantine in Shanghai, China, on 29 March 2022. (Photo: EPA-EFE / ALEX PLAVEVSKI)

Shanghai boosted lockdown restrictions for people in the eastern half of the city as local Covid infections jumped to a record. An academic estimated China’s Covid lockdowns may be costing the country at least $46-billion a month in lost economic output.

The global demand for vaccines is waning, a trend likely to curb the blockbuster sales that pharmaceutical giants like Pfizer and AstraZeneca saw at the height of the pandemic.

London’s Metropolitan Police are set to issue at least 20 fines to government officials close to the prime minister who broke UK lockdown rules, according to a person familiar with their thinking.

In the US, President Joe Biden’s administration is seeking funding to help prepare for future pandemics under its proposed fiscal 2023 budget. 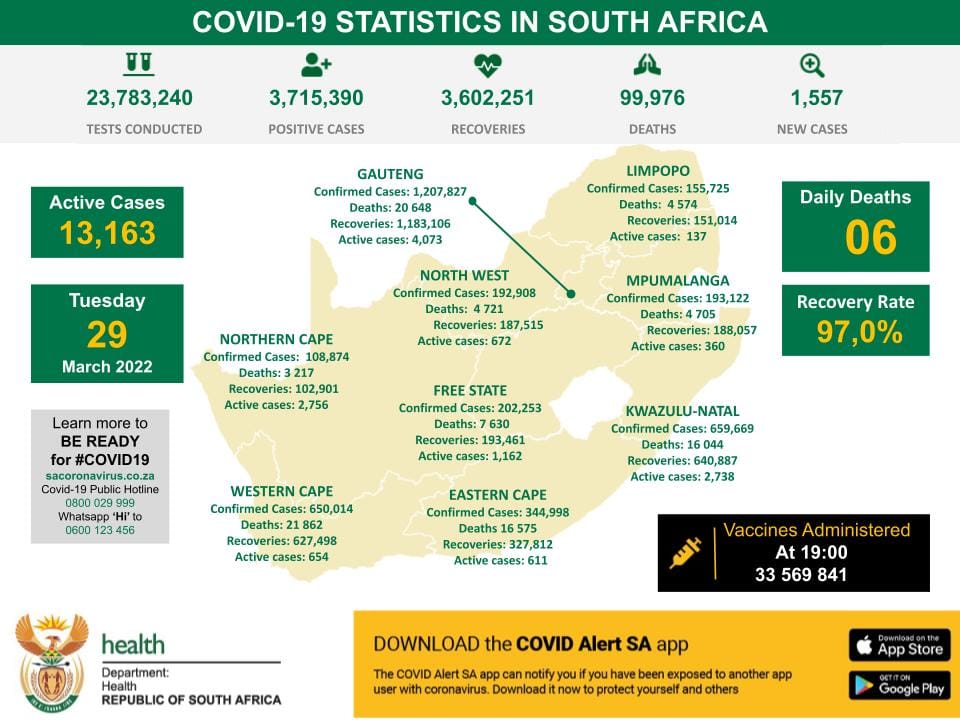 Hong Kong reported 3,164 new infections detected via laboratory tests and another 4,432 from tests taken at home, a slight decline from a day earlier, officials said during the city’s Tuesday briefing. There were 129 deaths in the previous 24 hours, mainly among elderly and infirm patients.

Vietnam, Southeast Asia’s fastest-growing economy, reaffirmed its outlook for an expansion of as much as 6.5% this year, seeing activity pick up from a slower-than-expected first quarter as risks from the coronavirus recede.

Gross domestic product will expand from 6-6.5% in 2022, Le Trung Hieu, head of the GDP department at the nation’s statistics office, said on Tuesday. That would be the quickest pace in the region, and the second-fastest in Asia-Pacific after India’s estimated 7.5% pace, according to the Asian Development Bank.

South Korea may ease social distancing measures further to allow private gatherings of up to 10 people and restaurants to operate until midnight, the Herald Business newspaper said, without citing anyone.

Currently, up to eight people are allowed in private gatherings, and cafes and restaurants must close by 11pm. Those measures are effective through April 3.

China’s Covid lockdowns are likely to be costing the country at least $46-billion a month, or 3.1% of GDP, in lost economic output, and the impact could double if more cities tighten restrictions.

That’s a minimum estimate from an economist at the Chinese University of Hong Kong, based on the assumption that cities generating about 20% of China’s gross domestic product are currently imposing targeted lockdowns. That cost would double if those areas had to follow Shanghai and impose stricter policies requiring most residents to remain at home.

The Shanghai city government issued measures to aid companies that are hit by the pandemic and partial lockdown. They include encouraging banks to increase lending to retailers and cut rates; offering subsidies to retailers, restaurants, airports and ports; offering more tax cuts, rent reductions for smaller businesses; and accelerating approvals for bond sales of airlines and airports.

Shanghai cranked up lockdown restrictions for people residing in the eastern half of the city, barring everyone from leaving their homes even to walk their dogs as local daily Covid-19 infections jumped to a record 4,477 on Tuesday.

All residents in the Pudong District, home to many elite financial institutions and the Shanghai Stock Exchange, will be confined to their homes and allowed out only to get a Covid test, according to a statement issued by the area’s residential compounds reviewed by Bloomberg News.

Residents shouldn’t walk in the hallways, garages or open areas of their residential compounds in order to reduce the risk of infection, Wu Qianyu, an official with the Shanghai Municipal Health Commission, said during a briefing on Tuesday. That includes walking pets.

A total of 6,215 cases had been reported for Sunday, according to CCTV state television, citing data from the NHC.

Oil demand in China is suffering from a fresh bout of high-profile virus clampdowns, with a staggered, eight-day lockdown spanning its top financial hub weighing on consumption in the world’s biggest importer.

In Shanghai, a city of 25 million people, peak morning-time congestion on Monday was 45% below year-ago levels as workers had to stay home, according to data by Baidu. In the eastern side of the sprawling city, some highways were closed, with barricades erected at tunnel and bridge entrances, and some logistics companies halted trucking work from local ports. After four days, the lockdown will be shifted to the western half to allow for mass testing.

After racing to build capacity and meet once seemingly insatiable orders for Covid-19 shots, the global vaccine industry is facing waning demand as many late-to-market producers fight over a slowing market.

The trend is poised to rein in the blockbuster sales that global pharmaceutical giants from Pfizer to AstraZeneca saw at the peak of the pandemic. It also stands to create new problems for local manufacturers from India to Indonesia that built mammoth capacity to make shots but are now grappling with excess supply.

Even as boosters are likely to keep demand alive for Covid inoculations worldwide, the desperate shortages that existed for much of last year have waned. Instead, in a dramatic reversal, the possibility of a global glut is now looking more likely.

London’s Metropolitan Police are set to issue at least 20 fines to government officials close to the prime minister who broke UK lockdown rules, according to a person familiar with their thinking.

The first batch of fines are expected to be levied as soon as Tuesday, the person said, asking not to be identified discussing police business. Prime Minister Boris Johnson is unlikely to be touched by Tuesday’s tranche of fines, the person said. Some people may face more than one fine, they said. DM/MC