Amber Fillary: A new record for swimming under the ice 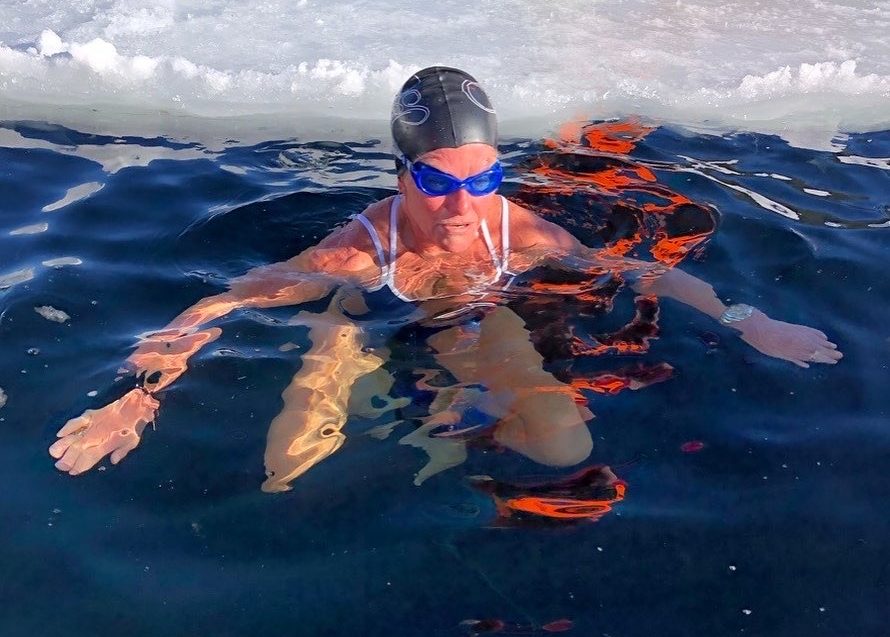 Amber Fillary is in the zone as she prepares to swim under thick ice for a world record in one-degree water in a lake in Mysutjern, south of Kongsberg in Norway. Image: Supplied

A motivational speaker and artist, Amber Fillary, who grew up in Newlands says that although she was incredibly nervous before the swim, everything came right once she got into the one-degree lake water to break her own record.

“I am totally adapted to the cold, so I don’t even get brain freeze anymore. As soon as I get in and start swimming, all my anxiety disappears. Then I am somewhere in my head counting strokes. It was a great swim. I had a lot of air left and I could have done more!”

Before this, Fillary, who is also toying with the idea of a Robben Island swim, had spent several months training with coaches in South Africa, learning free-diving techniques and breath-holding, before a brief time acclimatising to the cold.

For this particular record under Guinness World Record rules, Fillary could not wear a neck weight, which, she says, affords swimmers a certain extra buoyancy and glide. She says that her first two swims did not go particularly well.

Fillary also holds the record for the longest underwater walk, covering some 109.45m in three minutes, 47 seconds. She also holds the free-diving, no fins record of 150m, which would be six lengths of your average gym pool.

Her love of cold water and freediving started in London, where she worked a decade ago as a lifeguard at a double Olympics-sized outdoor pool, even during winter months. Fillary also swam with the world’s third oldest but arguably most exclusive open-water swimming club, the Serpentine Swim Club in London’s Hyde Park.

Fillary trains, when she is in Cape Town, at the Jan van Riebeeck High School in central Cape Town, under coach Allen Stubbs. Having struggled with addiction issues for much of her life, she says she has one, simple yet powerful message: “Don’t let depression or addiction get in the way of your life’s goals.

“Since the age of 15, I’ve battled with anorexia, bulimia and depression, and in my early twenties, spent mostly in rehab, I started to drink, overdose on medication and tried to commit suicide on several occasions. During this time, I managed a few sober years by attending AA meetings. After a nearly fatal car accident while driving drunk, I’ve managed over 13 years of sobriety.

“About this time, I met my late husband, Leonard, albeit amidst a dark period of my life, as the marriage was short-lived due to his passing from excessive drinking and later kidney failure.

“I have always had that addict’s feeling of never being good enough. But the wonderful people I have met along my way, as well as all the training, allowed me to reach my goal. That was the key. The swim just allowed me to switch off from all the negative thoughts.”

She will be back in Cape Town soon, and is already toying with the idea of a Robben Island crossing, as well as renewing certain acquaintances at the Sunday Hot Chocolate swims.

“There are not many people who can swim 90m underwater in a warm pool, let alone under ice. Huge congratulations, Amber!”

Next time, Fillary says, she wants to go further! But for that, she will need crowdfunding. DM/ ML

To support Amber Fillary in her next project, you can go here.