Zuma still punts the myth of political persecution in h... 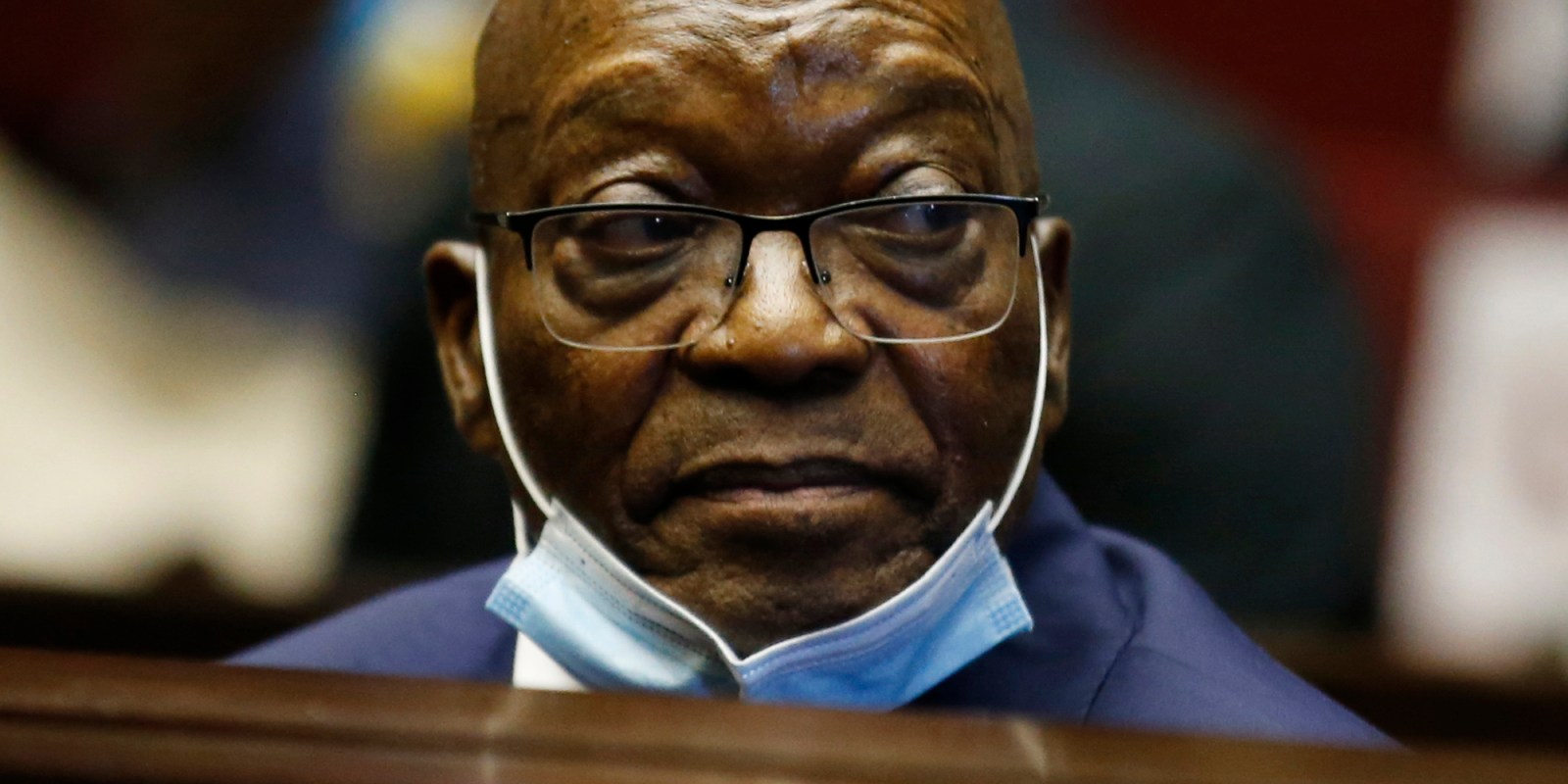 Former president Jacob Zuma appears in court during his corruption trial at the Pietermaritzburg High Court on 26 May 2021. (Photo: EPA-EFE / Phill Magakoe / Pool)

Zuma’s fanciful claims that he is the victim of a vast political conspiracy have run a course of almost 20 years.

It is clear to any armchair critic that former president Jacob Zuma intends to use every means possible to keep himself out of the dock for his impending Arms Deal trial until he has somehow negotiated a political solution to a criminal issue.

An old hand at manipulating players in high power, Zuma knows there is a political solution to everything.

For now, the National Prosecuting Authority (NPA) can only provide a rebuttal against current and future legal attempts by Zuma to delay his day in court. Zuma is playing for time and the NPA is up against the clock, contending with Zuma’s age and alleged medical conditions.

Over the past two weeks, the State has been required to answer Zuma in two forums. The first was regarding his petition to the Supreme Court of Appeal (SCA) to hear his bid against the February judgment against him by Judge Piet Koen, and more recently his application to the same judge to delay his trial indefinitely until his SCA petition is finalised.

This is the continuation of Zuma’s 2021 application, formally known as a “special plea”, to have veteran prosecutor Billy Downer removed from the criminal trial in terms of section 106 (1)(h) of the Criminal Procedure Act, which deals with a prosecutor’s “title to prosecute”.

The former president contends that Downer is not fit to prosecute at his trial because he is biased. He argues that should the court find in his favour, he would be entitled to an immediate acquittal in terms of section 106 (4) of the same act.

Koen dismissed the special plea application in October 2021, saying “many” of the items raised by Zuma’s legal team in support thereof were “based on speculation or suspicion or are based on inadmissible hearsay evidence and not on fact”.

In February, Koen denied Zuma leave to appeal against that judgment, stating that the trial should proceed. He said that Zuma could challenge the special plea judgment after the criminal trial was completed.

On 9 March, Zuma petitioned the Judge President of the SCA for direct access to the court after being denied access by Koen.

On 17 March, he lodged an application with the Pietermaritzburg High Court to delay his trial — set down for 11 April — pending the finalisation of the SCA petition.

The crux of Zuma’s argument that he wants to vent at the SCA is that Downer lacks “independence and impartiality” and that the impending trial has already been tainted by political and unlawful meddling, specifically involving the NPA. Downer would thus be unable to conduct a “lawful prosecution” that will uphold Zuma’s constitutional rights to a fair trial.

We have heard this all before. Many, many times.

The NPA views Zuma’s SCA petition with little respect. It has informed the appellate court that it intends to oppose the matter by not filing any opposing papers at all.

Advocate KL Singh, of the KZN prosecutions directorate, said in a letter that the NPA “does not intend to file answering papers” and would simply ask the court to view the October 2021 judgment on the matter Zuma is petitioning against, adding it deals “comprehensively” with the issues being raised by the former president.

In response to Zuma’s application to delay the trial, prosecutor Isak du Plooy said in papers filed with the Pietermaritzburg High Court that any delay would “not be in the interests of justice”. This was simply a continuation of Zuma’s “Stalingrad defence strategy” that he had used in civil litigation matters since 2005 “to derail or delay the criminal trial”.

Du Plooy said that even Zuma’s now deceased lead counsel, Kemp J Kemp, in 2007 told the court in a failed application to halt the State from retrieving from Mauritius documents that incriminated Zuma, that the fight between Zuma and the State was “not like a fight between two champ fighters” but “is more like Stalingrad: It’s burning house to burning house”.

To further present Zuma as a desperate litigant and criminal suspect intent on staying out of jail, whatever the cost, the NPA recounted at least eight times that he, between 2006 and 2020, brought unsuccessful actions to various courts in a bid to ultimately stop his criminal trial from being heard. The legal costs being picked up by the taxpayer are estimated to be between R16.7-million and R32-million.

In an attempt to change the narrative, Zuma’s legal team has consistently attempted to paint his criminal trial as so deeply complex that it requires every step to undergo numerous stages of scrutiny and oversight. The strategy includes presenting any decision against him as a direct indication that the judiciary is rife with political interference and is structurally corrupt.

It is no coincidence that leaders who sympathise with the former president, such as ANC royalty Lindiwe Sisulu and KwaZulu-Natal Premier Sihle Zikalala, have in recent months attacked the judiciary.

Other ANC leaders aligned to Zuma who are also facing criminal charges, such as Zandile Gumede and Zweli Mkhize, have sung a similar song.

Zuma’s fanciful claims that he is the victim of a vast political conspiracy have run a course of almost 20 years.

This theory involves foreign intelligence agencies such as the CIA, double agents working for the state, a hostile media and internal ANC factional battles.

Zuma is also the Radical Economic Transformation (RET) messiah of the poor, pushing an image of being targeted by unnamed forces because he wants to implement radical policies to liberate the masses.

The NPA desperately needs a high-profile scalp and Zuma’s would be the ultimate win. But that organisation is under great pressure — a gift of Zuma’s administration — and for now, has few options. It has to fight until there is no legal remedy left for Zuma to abuse. DM