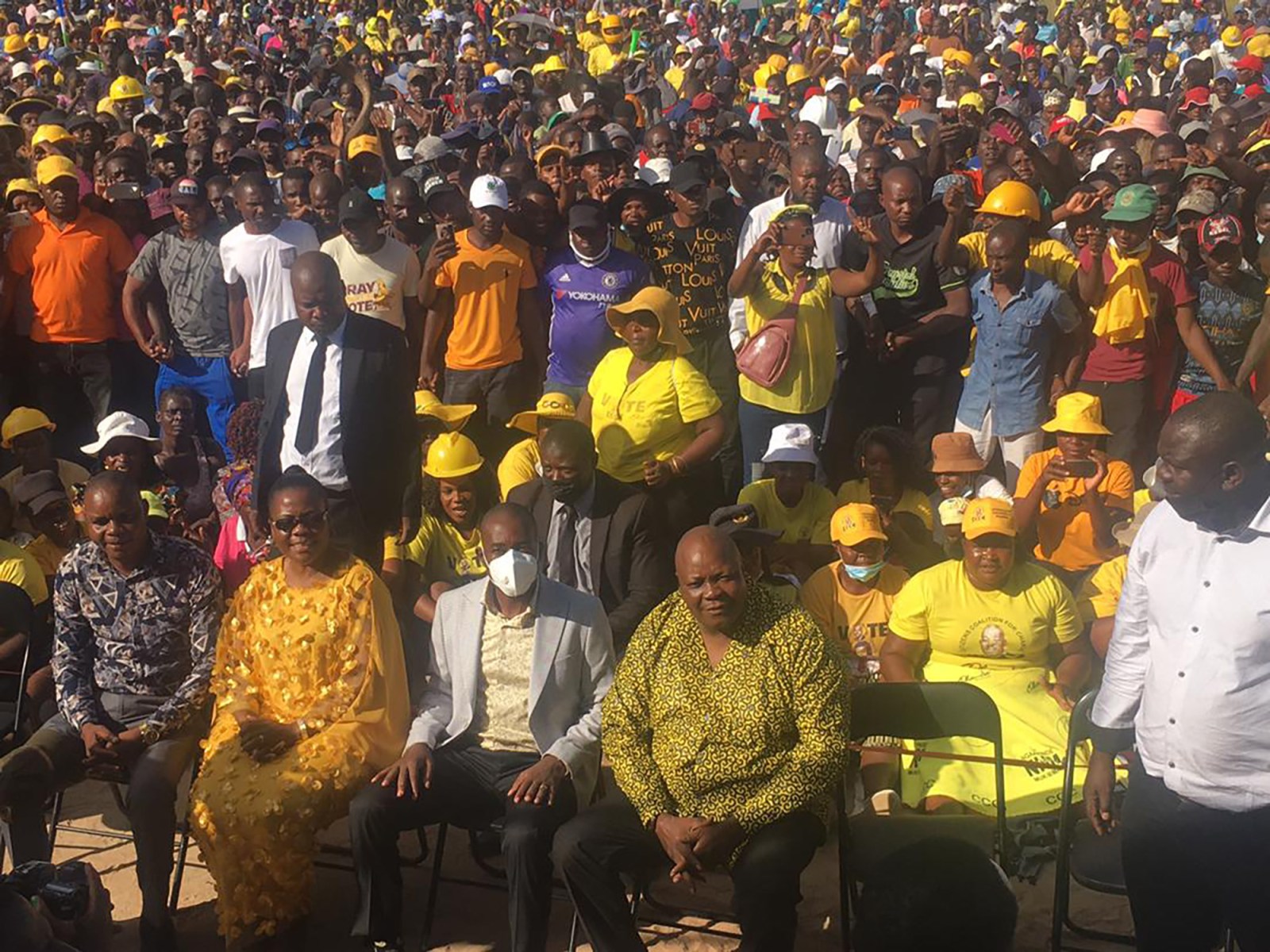 Leader of the Citizens Coalition for Change Nelson Chamisa Chamisa (with white mask) is flanked by officials in front of party supporters in Epworth, just outside Harare. (Photo: Frank Chikowore)

The Zimbabwean president’s party lost support at the polls — seen as a dry run for the 2023 general elections — despite using state resources, intimidation, violence and state media against opponents.

Mnangagwa’s party lost at the polls — seen as a dry run for the 2023 general elections — despite using state resources, intimidation, violence and state media against opponents.

Mnangagwa, who succeeded Robert Mugabe following a bloodless coup in November 2017, had roped in his predecessor’s son, Robert Mugabe Jnr, whom he paraded in front of thousands of Zanu-PF supporters in Harare’s dormitory town of Chitungwiza during his last day of political campaigning.

Despite this, Nelson Chamisa’s Citizens Coalition for Change (CCC) party cruised to victory in 19 parliamentary constituencies out of the 28 contested, with Zanu-PF grabbing the remainder including two that were previously controlled by the opposition, according to results announced by the Zimbabwe Electoral Commission.

The CCC also claimed 61% of the vote in local government elections in several urban and rural municipalities.

The election results also showed that Zanu-PF remains popular in rural areas, where it won eight of its seats despite a poor voter turnout in most constituencies. The seats fell vacant after a faction of the Movement for Democratic Change-Alliance, led by Senator Douglas Mwonzora, recalled several legislators and councillors following a Supreme Court ruling delivered last year. That ruling said Chamisa’s ascendancy to the presidency of the main opposition party, following the 2018 death of the party’s founding president, Morgan Tsvangirai, was unprocedural in terms of the party’s constitution.

Chamisa has accused Mwonzora of being used by Mnangagwa’s party to decimate his party — a charge that Mwonzora denies.

Read in Daily Maverick: Citizens step up to patch up Zimbabwe – and also elicit a giggle in tough times

Following the split, Mwonzora retained the name of the party and took control of the party’s headquarters and funds allocated by the government to political parties that reach a 5% threshold in Parliament. As the votes in the 26 March by-elections were being counted, Mwonzora sprang another surprise by recalling 16 more councillors.

Fadzayi Mahere, the spokesperson of Chamisa’s newly formed party, told Daily Maverick that her party was ecstatic after it trounced Mnangagwa’s party and the political formation that recalled opposition legislators and councillors.

“We are happy that we won 19 parliamentary seats and the people have shown that they do not trust the Mwonzora cabal. However, the run-up to the polls was not easy because of the lack of electoral reforms, violence and the banning of our rallies by the police,” said Mahere.

One person died in Mnangagwa’s hometown of Kwekwe when some Zanu-PF aligned gang members wielding machetes, stones and spears besieged Chamisa’s rally and attacked his supporters. Chamisa accused Mnangagwa and his party of gangsterism.

A spokesperson for Mwonzora’s party, Witness Dube, said his party was still analysing the results of the polls.

“We are still receiving the results from various polling stations and we will work with everyone who has won because Zimbabwe is a democracy.”

Political analyst Rashweat Mukundu said the trouncing of Mwonzora’s party, to the extent his party did not win any of the parliamentary and council seats, showed that there were only two political powerhouses in Zimbabwe.

“It’s now foolproof that we have two political giants in the country, that is Zanu-PF led by Mnangagwa and Chamisa’s CCC. The trouncing of Mwonzora is a clear message that his party is dead and its memorial service will be held next year when Zimbabweans go to the scheduled general elections,” said Mukundu.

Meanwhile, an election watchdog, the Zimbabwe Election Support Network, said the run-up to the weekend polls was heavily tilted towards the ruling party although there was generally peace on polling day.

“State radio stations, television and newspapers were not giving fair coverage to the opposition as they chose to side with the ruling party. We received several reports of violence and intimidation targeting Citizens Coalition for Change members and supporters,” said Andrew Makoni, the watchdog’s chairperson. DM