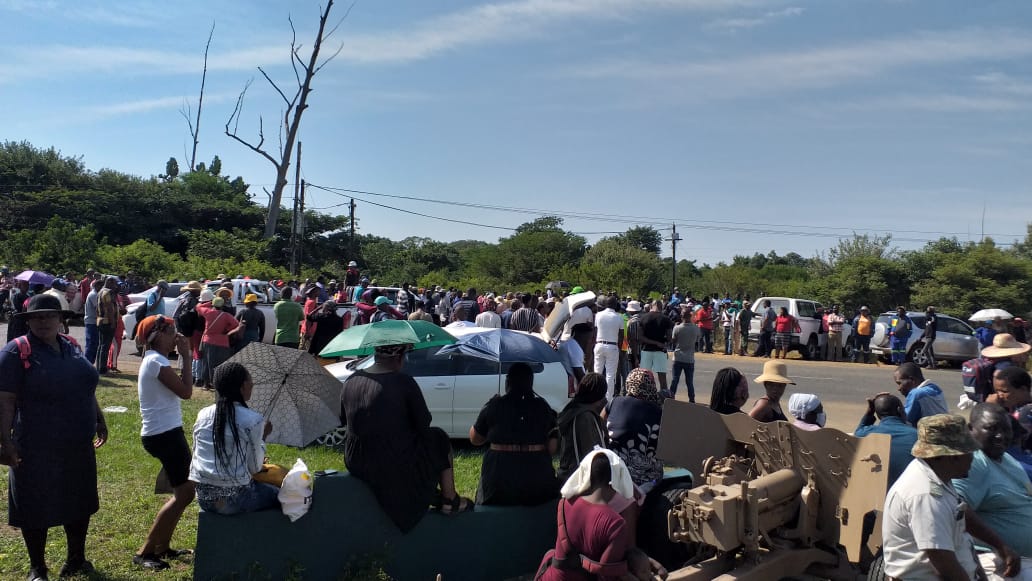 Part of the large group of people who converged to occupy Futululu indigenous forest in KwaZulu-Natal last week. (Photo: Supplied)

Managers of iSimangaliso Wetland Park in KwaZulu-Natal say they are still committed to further engagement with community leaders over recent attempts to occupy land in the southern Futululu section of the park — but have also pledged to not ‘fold their arms’ in the face of the land invasion.

The first invasions are reported to have started on 21 March and by late last week, hundreds of would-be land occupiers were gathered along the boundaries of the Futululu forest, directly opposite the South African National Defence Force 121 Battalion military base near Mtubatuba.

It remains unclear how many people have taken direct occupation of land by sleeping overnight in the park, but nearby residents have reported that several people with pangas had started to clear vegetation to stake out residential or farming plots.

One resident told Daily Maverick that news of the invasion bid had spread on social media, drawing people from as far as Vryheid and Bergville in private vehicles and taxis.

“One of the local men I spoke to had already marked out a new plot measuring 100m by 150m. Another young man said he had found a place where he could catch fish and plant a garden,” the resident said.

Several informal vendors were selling fruit, foodstuffs and soft drinks to people who had flocked to the area on foot or by vehicle from Dukuduku, Zwenelisha, Monzi and other neighbouring areas.

Park spokesperson Bheki Manzini said late on 27 March that a high-level meeting was scheduled for 28 March in an attempt to broker a lasting “win-win” solution for all parties. Rather than opting for confrontation, the objective was to consult a wide range of stakeholders, including local leadership, sugar farmers, community members, Ezemvelo KZN Wildlife, SA Police Services and municipalities.

It is understood that those seeking to occupy Futululu are demanding that park authorities break open the mouth of the Lake St Lucia estuary immediately because subsistence farms in the Umfolozi River floodplain had been inundated with water after recent heavy rains.

They complained that they were not able to feed their families or grow crops on flooded land, but many outsiders appear to have joined the bandwagon — creating risks of a more widespread and opportunistic invasion similar to the early 1990s land occupation that all but wiped out the unique Dukuduku coastal lowland forest nearby.

The issue of breaching the mouth artificially has been a hot potato for more than a decade, with several commercial sugar farmers, anglers and tour operators pushing for it to be breached on a regular basis to protect low-lying farms; to ensure more favoured marine angling species in Lake St Lucia or to reduce the accumulation of muddy sediments that hamper boat-based tourism in the lake estuary.

Until quite recently, park managers have been trying to reverse decades of human interference in the natural functioning of the lake estuary and to restore freshwater flows from the Umfolozi River. Previously, the mouth was diverted deliberately to flow into the sea rather than the estuary, largely at the behest of commercial sugar farmers whose families were granted land there at the end of World War 1 and gradually canalised the Umfolozi River to reduce flood risks.

In August 2015, local sugar farmers Paul van Rooyen, Petros Maphumulo and the Umfolozi Sugar Planters association sought an urgent interdict against the iSimangaliso Wetland Park Authority and the national ministers of water, the environment and forestry, and land affairs, calling for the mouth to be breached artificially whenever river levels threaten farms in the floodplain.

But high court Judge Mohini Moodley rejected the application, lamenting that the “selfish and outdated” interests of a small group of sugar farmers had been pitted against the declining ecological health of Lake St Lucia— South Africa’s largest estuarine lake and its first World Heritage Site.

Van Rooyen and his fellow farmers took their case on appeal to the Supreme Court, but lost the case once again, with judges noting that the farmers’ own technical experts had advised them to consider installing new drainage measures or to simply abandon cane fields located in a natural river floodplain.

More recently, iSimangaliso appears to have modified its stance against artificial breaching, and in January 2020 it acceded to growing pressure to break open the mouth artificially with mechanical diggers.

Now the pressure is building up on iSimangaliso and national Environment Minister Barbara Creecy to break the mouth open on a regular basis. Creecy has appointed a panel of science experts to make recommendations to her, while iSimangaliso has been asked to explain its apparent policy flip-flop.

On Friday, 25 March, during an iSimangaliso summit at Sibaya Casino to woo more commercial tourism investment, the park’s chief executive, Sibusiso Bukhosini, said he wanted to “provide a sense of comfort” to potential investors.

Major progress had been made in improving tourism and road infrastructure, to the extent that “you can drive your Porsche” to several resorts. There had been a history of animosity between conservation officials and some adjacent communities, but new forums had been established to resolve disagreements.

There would always be “issues with x, y or z”, said Bukhosini, but he nevertheless encouraged investors to put money into the park, while also helping to reduce unemployment in neighbouring communities.

It is not clear whether Van Rooyen was at the meeting because he was considering plans to invest in the park, but the big question he wanted answered was: when will a final decision be made on new management plans to breach the estuary?

While there were plans to redevelop the Charters Creek resort, this camp was currently partly underwater because of high lake levels, he said. Access routes to the Maphelane resort were also in poor condition. Were visiting anglers happy to catch freshwater barbel or tilapia, or did they want marine fish instead?

Zwenelisha resident Calvin Mthembu also called for clarity on whether the estuary mouth would be breached following recent rains, noting that several residents had started to invade land at Futululu last week.

Bukhosini told Van Rooyen he would submit a report to Creecy before the end of the month, but his position on reopening the mouth was that “we will have to assist it when the situation dictates… even though some scientists were up in arms”.

Bukhosini did not directly address the recent land invasions at Futululu, although biodiversity head Sizo Sibiya acknowledged that park authorities had known that the invasions had been “looming for two or three months”.

“We have had five meetings with both the people doing the invasion… and we’ve met with local indunas who are leading these people.”

Sibiya said the authority was also exploring “legal means” to resolve the situation.

“We can’t just fold our arms. But if we can’t find common ground we would be in neglect of our duties,” he said, noting that Futululu was an important indigenous forest and wetland area. DM/OBP