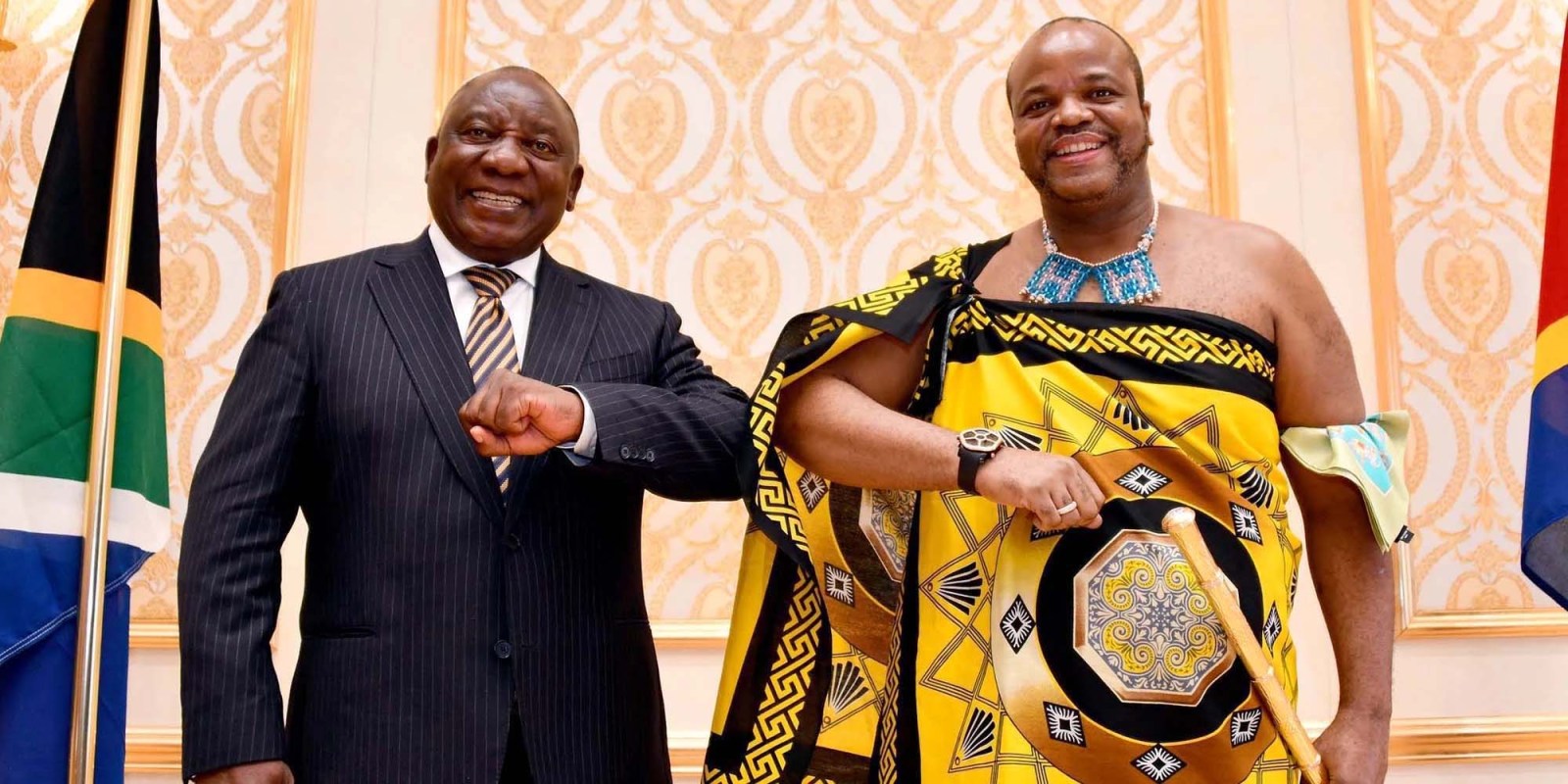 President Cyril Ramaphosa with King Mswati III at the Royal Palace in the Kingdom of Eswatini on 2 November 2021. (Photo: Elmond Jiyane / GCIS)

The top-down traditional meeting between the nation’s monarch and his subjects cannot be the format for serious political talks.

While South African President Cyril Ramaphosa appears to be toying with the ambitious notion of mediating in Russia’s war against Ukraine, two more modest mediation challenges closer to home demand his attention.

In Lesotho, where Ramaphosa has been the Southern African Development Community’s (SADC) special envoy for seven years, politics is again paralysed by internal rifts in the All Basotho Convention, the anchor of the governing coalition. Reforms proposed by Ramaphosa and SADC have long been stalled, although there are some signs of movement.

And in Eswatini, the national dialogue Ramaphosa persuaded King Mswati III to hold is threatening to be stillborn because of fundamental differences over its format. This is even before the Swazi people get to the substance of the discussions.

SADC intervened in Eswatini in July last year after public protests descended into rioting that destroyed many government offices and businesses. Scores of demonstrators and rioters were shot dead by security forces, and aftershocks still rumble across the country. SADC sent delegations to Eswatini, and in November Ramaphosa, wearing his SADC security troika chairperson hat, met with Mswati.

Ramaphosa announced afterwards that he and Mswati had agreed that Eswatini would ‘work towards the establishment of a national dialogue forum.’ They also decided that the SADC Secretariat would collaborate with the government of Eswatini to draft terms of reference for the dialogue, covering its processes and composition.

“The process towards the national dialogue will take into account and incorporate structures and processes enshrined in the Constitution of the Kingdom of Eswatini, including the role of the Parliament of the Kingdom, and the Sibaya convened by His Majesty King Mswati III.”

Ramaphosa’s statement also said preparations for the dialogue would take place during the coming three months. That didn’t happen and seems unlikely as things stand.

The delay revolves around the Sibaya and the fact that Ramaphosa’s statement in November was ambiguous. On the one hand, he seemed to accept Mswati’s insistence that the Sibaya format is used. On the other, by giving SADC a role in drafting the terms of reference, he suggested a more objective, neutral process.

Sibaya is defined in Eswatini’s constitution as “the highest policy and advisory council … of the nation” where “the nation” presents its views on “pressing and controversial national issues.” But in practice, it has been a traditional monologue where the king talks down to his people and they listen in silence. Inevitably, the palace has focused on the Sibaya elements of Ramaphosa’s statement while the opposition leans towards the SADC consultation aspect.

Earlier this month, the Multi-Stakeholder Forum (MSF) wrote an open letter to Prime Minister Cleopas Dlamini calling for a “genuine all-inclusive political dialogue, not the Sibaya Monologue.” MSF is the most representative political group in Eswatini, comprising political parties, civil society, churches, businesses and others.

The MSF expressed concern that in his 18 February budget speech, the finance minister said “Government have set aside E22-million in this year’s budget for the Sibaya National Dialogue.” The MSF recalled that in his speech at the opening of Parliament, Mswati indicated that the national dialogue would be run strictly along the lines of traditional Sibaya.

The MSF reminded Dlamini that the SADC Secretariat should have worked with the government to draft terms of reference for the dialogue, including its processes and composition. This hadn’t happened, the MSF said. “It seems the king and government are reneging from the undertakings which we believe were made in good faith with the SADC regional leaders through the Organ Troika represented by President Ramaphosa.’

Instead of Sibaya, the MSF said the “mass democratic movement” was calling for a national political dialogue “that conforms to international standards, mediated by an independent and impartial chairperson who commands respect and recognition from all protagonists to the impasse.” In contrast, Sibaya would allow the king and his government to be both referee and player.

The MSF is right that the national dialogue format is crucial to its outcome, so a Sibaya approach would start the process entirely on the wrong footing. And who participates will be the next critical decision. Unless pushed, Mswati seems likely to stick to the current format of excluding political parties.

Ramaphosa will host a summit in Pretoria of SADC’s security organ troika early next month. The meeting will mainly discuss the progress of SADC’s Mission in Mozambique, that is fighting the Islamist insurgency in the north. But Eswatini has been invited to participate because it has — for the first time — been put on the SADC security organ’s problem country list, officials say.

Ramaphosa will need to be far firmer at the summit than he appears to have been at his one-on-one meeting with Mswati in November. He needs to push his regional peers to demand a national dialogue conducted by SADC, not the palace. And all Eswatini’s genuine stakeholders — including the banned political opposition party Pudemo for instance — must be invited.

Anything less would be a betrayal of the democratic aspirations of the Swazi people and SADC’s own purported values. DM