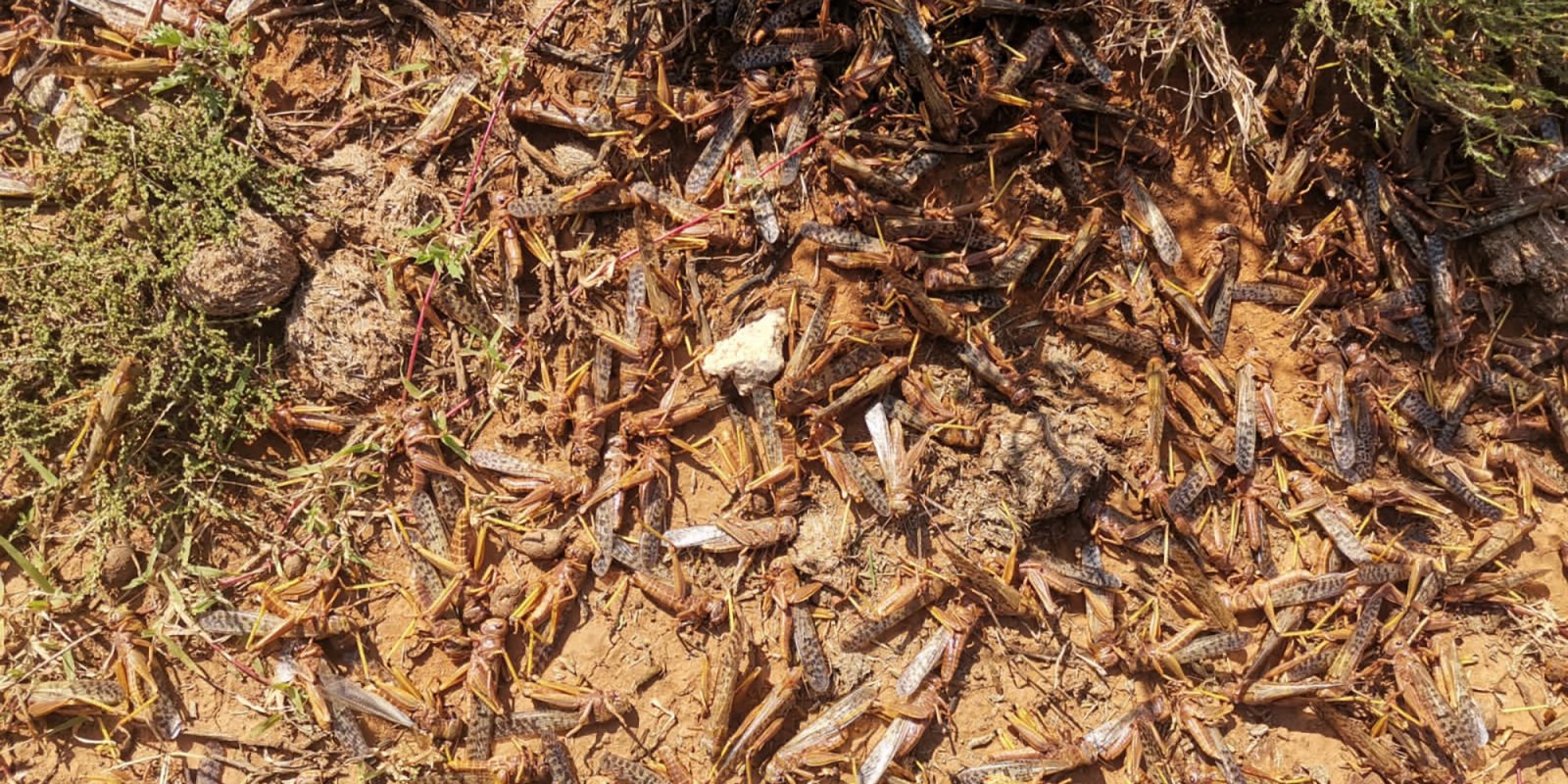 Already battered by drought, Eastern Cape farmers are desperate after aerial spraying was grounded as a locust plague sweeps across the province, leaving a trail of destruction.

Agri Eastern Cape president Peter Cloete said Agri EC was notified on 22 March 2022 that the two helicopters spraying the swarms had been grounded on the instruction of the director of the Disaster Management and Climate Change Directorate at the Department of Agriculture, Land Reform and Rural Development (DALRRD), Dr Ikalafeng Kgakatsi.

“The rationale for this decision cannot be understood given the fact that we are currently experiencing the largest outbreak recorded. There has been no communication with the control teams on the ground, including the relevant roleplayers… Although we understand that Sumi Alpha [insecticide] is in short supply, there is still enough to spray up to 2,000 hectares,” Cloete said.

Many affected farmers had just emerged from a seven-year drought and the first available fodder in years was being eaten by locusts.

“The continued aerial spraying in the areas with available poison has been deemed, by those in control on the ground, as the best option at the moment. It is the view of Agri EC that the entire handling of this current and previous locust outbreak has been poorly managed by the DALRRD under the leadership of Dr Kgakatsi.”

Cloete said organised agriculture has done everything in its power to assist where it can, but this has been hampered by poor resource management and communication from Kgakatsi.

“We are calling for the immediate resumption of aerial spraying activities and clarity on exactly what the issue is with further pesticide procurement and where organised agriculture can assist the department.”

He added that if Kgakatsi is going to continue working against the affected roleplayers, who are trying to help the department, he needs to be removed from his position and placed where poor decision-making is not going to affect food security in South Africa.

“The head of department and minister need to take ownership of this problem and urgently intervene to ensure that management and coordination of resources at ground level is better handled and organised.”

DA spokesperson on rural development and agrarian reform Retief Odendaal said farmers are still recovering from the worst droughts on record and battling to save their farms from one of the largest locust plagues in living memory.

“The locust plagues are currently sweeping across three provinces, including the Eastern Cape, destroying everything in their path, wiping out crops and decimating veld meant for feeding livestock,” he said.

Odendaal said the DA has written to Eastern Cape premier Oscar Mabuyane requesting that the provincial government intervene and help these farmers, who are close to breaking point as they battle crisis after crisis with little to no support.

“The worst-affected farms are based in the Sarah Baartman and Chris Hani districts. The current situation is being exacerbated by a lack of poison used to bring these locust swarms under control.”

Odendaal said the DALRRD has been leading the charge against this outbreak, but it has become increasingly clear that the provincial government will have to become involved.

“I have written to premier Mabuyane and asked that the provincial government intervene, and that disaster relief funding be set aside to assist farmers who have been affected by the plagues. I believe that not all farmers would need assistance, and we must make aid available only to those who have no financial means to carry them through this latest crisis.”

“The government also needs to engage with organised agriculture to determine if there are other ways that they can assist in dealing with this crisis,” he said.

Responding to Daily Maverick’s questions, Eastern Cape department of rural development and agrarian reform spokesperson Masiza Mazizi said the management and control of locusts were guided by the Agricultural Pests Act which is the responsibility of the DALRRD.

“However, the province, working with the national department, executes and oversees the effective management and control of the locusts. The national department provides training for sprayers, equipment, chemical and protective clothing. Sprayers are led by district locust officers, who are elected or nominated by the farmers’ union in every locust district. Furthermore, they assist with awareness campaigns and information distribution,” he said.

Mazizi said the Eastern Cape department of rural development and agrarian reform has been creating a conducive environment for spraying, mobilising farmers for training so they can participate in the spraying programme, conducting awareness campaigns, including posters, in the affected local municipalities.

“The department also assists in the distribution of chemical protective clothing and equipment to the relevant storage sites in the province. WhatsApp groups have also been created to create a quick reporting system for farmers,” he said.

“Lastly, spraying should not take place when it is wet and also note that if it rains after spraying, chemicals might not be as effective as they are supposed to be and spraying is supposed to take place during the night or in the early hours while locusts are still sleeping.”

DALRRD spokesperson Reggie Ngcobo said the department is fully committed to the fight against the locust outbreak in the Northern Cape, the Free State, the Western Cape and the Eastern Cape.

“In December last year the department bought an additional 600,000 litres of chemicals to be given to the appointed farmers and contractors who are on the ground fighting the outbreak. The department has procured enough insecticide in powder form to be used in environmentally sensitive areas,” he said.

“In February and early March 2022 the department received reports that the chemicals were finished. We then dispatched a team of our senior officials to provinces to investigate what would have happened in the space of two to three months, given the fact that the chemicals were bought mid-December while we were all on a Christmas break.”

It was decided to halt aerial spraying for a short period in favour of ground spraying, while the team investigated what happened to the 600,000 litres of chemicals.

“Even before the conclusion of that work, a number of farmers reported that there are chemicals that have resurfaced and some drums were located in the Western Cape. Upon the discovery of these chemicals the team has informed the pilot assisting with air spraying to resume with the work.”

Ngcobo said the department has already spent more than R50-million since the outbreak began and will ensure that partners or stakeholders assisting in the fight account for whatever government resources they are given.

“The department has further procured the available registered insecticides to continue with locust control to minimise the negative impacts on food security. The department will establish a joint operation committee to monitor the locusts in the affected provinces.”

Ngcobo said the department called on stakeholders such as Agri SA [in the] Eastern Cape and Northern Cape to work through the channels of communication opened by the department through Agri SA. DM/OBP