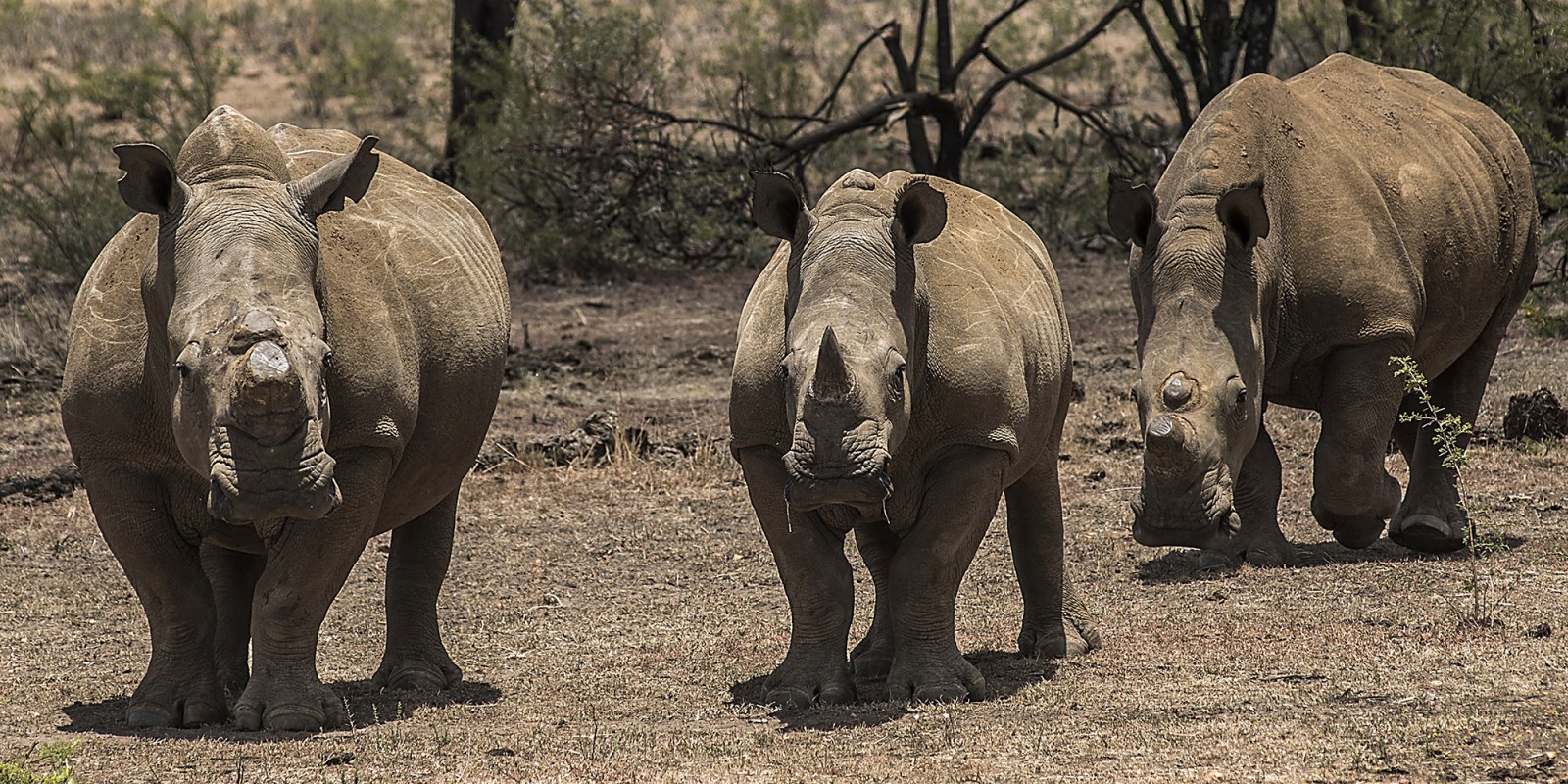 White rhinos with their horns removed as an anti-poaching measure graze on a ranch belonging to John Hume, hotel magnate and rhino farmer, in South Africa, on Friday, Dec. 4, 2015. (Photo: Waldo Swiegers/Bloomberg via Getty Images)

The $150m bond is billed as a ‘first of its kind’, which uses investments to achieve conservation goals. In this case, one of the aims is to increase the number of endangered black rhinos.

On the same day that South Africa hosted its fourth Investment Conference in Sandton, a new instrument was offered to investors – a Wildlife Conservation Bond (WCB), or Rhino Bond. The aim is to provide a return to investors based on an increase in black rhino numbers in South Africa. The bond was priced on Thursday by the International Bank for Reconstruction and Development (IBRD), an arm of the World Bank.

“The WCB is a first-of-its-kind, outcome-based, financial instrument that channels investments to achieve conservation outcomes – measured in this case by an increase in black rhino populations,” the World Bank said.

Of the proceeds, R152-million will be used to protect and increase black rhino populations in South Africa’s Addo Elephant National Park and the Great Fish River Nature Reserve. It comes against the backdrop of declining rhino numbers overall in the face of a poaching onslaught to feed horn demand in Asia. The remainder of the proceeds will go to support the financing of a mix of green and social projects in World Bank member countries.

“Through the WCB, investors are supporting the financing of activities to protect and grow a critically endangered species with clear conservation targets, contributing directly to biodiversity, and bringing jobs to local communities through the creation of conservation-related employment in a rural and under-served region of South Africa,” the World Bank said.

Unlike traditional bonds, this one offers no coupon.

“Instead, the issuer will make conservation investment payments to finance rhino conservation activities at the two parks. If successful, as measured by the rhino growth rate independently calculated by Conservation Alpha and verified by the Zoological Society of London, investors will receive a success payment at maturity, paid by the IBRD with funds provided by a performance-based grant from the GEF [Global Environment Facility], in addition to principal redemption of the bond,” the World Bank said.

The maximum “Conservation Success Payment” is $13.76-million, which means that will be the maximum payment delivered to investors after five years on top of the principal – if the rhino population targets are achieved. That would give a return of about 9% over five years – less than 2% per year, but there is an added return to that from the fact that the bond is “below par”, which means the bond is selling for below its face value. The re-offer price is 94.84%.

The ultimate enticement to investors is that they can contribute to conservation while at least getting something in return. That has resonance in an age when ESGs – environmental, social and governance issues – are all the rage.

Credit Suisse was the sole structurer and joint book-runner with Citibank, and the target is institutional investors.

There are about 5,500 black rhinos left in Africa – just a few decades ago there were tens of thousands. A browser, it is both smaller and more temperamental than its larger and more cousin, the white rhino.

One of the welcome things about this bond is that it is tapping private-sector investment. The preservation of big, dangerous African wildlife is often a hot-button issue among the middle classes in affluent, developed economies – people far removed from the scene.

In South Africa, the world’s most unequal economy with an unemployment rate that is by its broadest definition approaching 50%, the cash-strapped government must balance funding for wildlife conservation with pressing social needs. If Western suburbanites want to conserve African wildlife they should pay up.

It remains to be seen how this all pans out, and if rhinos and investors will get some bang for their bucks. The fact that one of the reserves is run by the shambolic Eastern Cape provincial government might raise red flags in some quarters. But the World Bank said the parks “were selected for this pilot transaction based on their ecological, managerial and financial capacity to achieve rhino conservation outcomes”. In a sea of shoddy governance, there are some islands of excellence.

While initiatives such as the Rhino Bond are welcome, the South African government is simultaneously pursuing policies that private rhino owners say will undermine efforts to grow the species’ numbers. A government panel has recommended phasing out the intensive and captive breeding of rhinos in South Africa, despite the fact that the private sector has done a better job of conserving the animals, at least in terms of numbers. Most of South Africa’s roughly 12,500 white rhinos are in private hands.

Some would also argue that legalising the global trade in rhino horn would bring in far more money for the conservation of the species, but that is a thorny issue, to say the least.

Meanwhile, depending on its outcomes, similar initiatives may follow the rhino bond. Perhaps an elephant or lion or tiger bond? The returns may seem bearish but the conservation dividends could be bullish. DM/BM