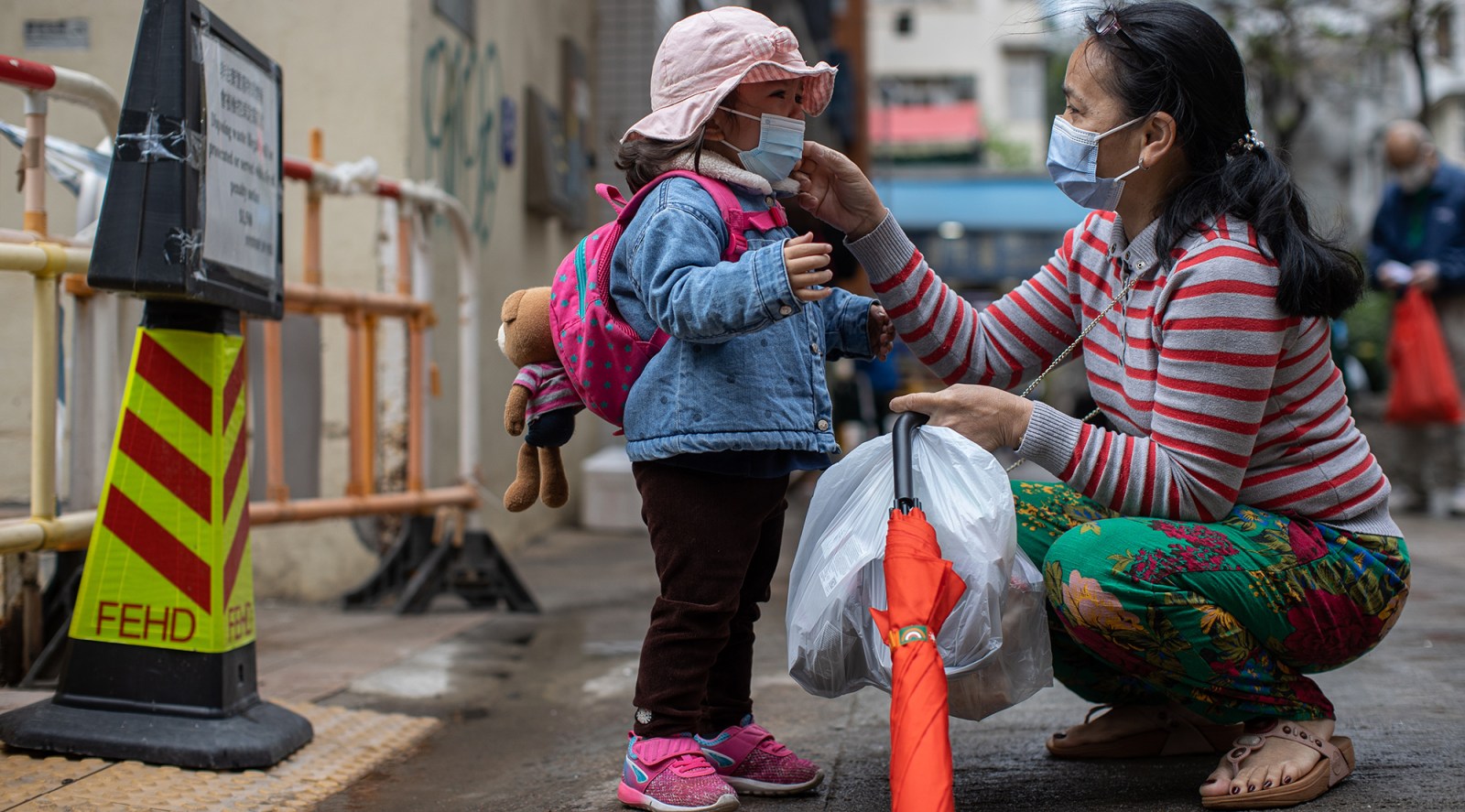 A woman adjusts a face mask on a little girl outside a wet market in Hong Kong, China, on 24 March 2022. (Photo: EPA-EFE / JEROME FAVRE)

Singapore Prime Minister Lee Hsien Loong said many Covid-related restrictions would be eased, with group sizes doubled to 10, masks made optional outdoors and most restrictions lifted for fully vaccinated visitors.

Meanwhile, Hong Kong’s leader said she’s hopeful the international financial hub can lower barriers with the outside world after the current outbreak wanes.

China is facing a temporary hit to factory production and a lingering consumer slump amid the strictest Covid controls since the initial outbreak two years ago.

Moderna said its Covid-19 vaccine produced a strong immune response in children under age six in initial results from a large final-stage trial. 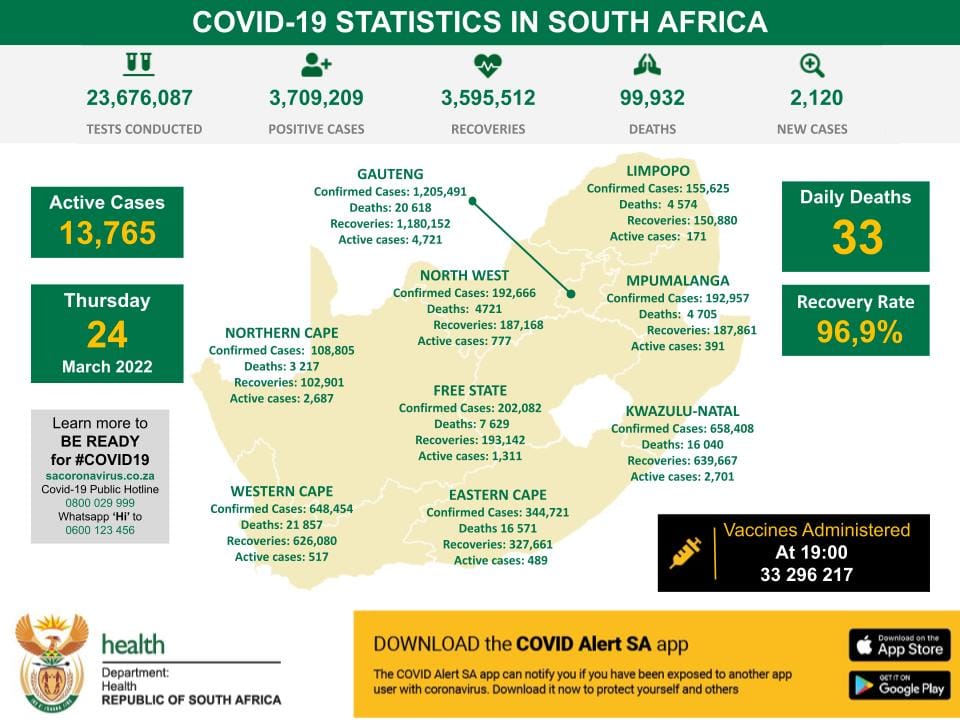 Mazda plans to halt two plants in Japan for two days next month, citing a parts shortage due to the Covid outbreak in China.

Hong Kong’s leader said she’s hopeful the international financial hub can lower barriers with the outside world after the current outbreak wanes.

Carrie Lam said she remains “very optimistic” Hong Kong can resume talks to reopen the border with mainland China as well as “open up to the rest of the world” once “this wave subsides.”

A coalition of leading passenger and cargo airlines is calling on Hong Kong to scrap pre-flight and on-arrival Covid-19 tests for aircrew, saying they are a key reason to avoid flying to the city.

Hong Kong is the only jurisdiction in Asia that requires such tests, which lead to delays and the risk of staff being sent to isolate at government quarantine facilities, the group wrote in a March 23 letter to the city’s leader, Carrie Lam, seen by Bloomberg News. The procedures are disrupting operations beyond what airlines can endure, the letter said.

With the latest wave of the virus subsiding, the prime minister said that Singapore will double the group size from the current five persons to 10 and allow up to 75% of employees who can work from home to return to their workplaces, he said. The city-state will also “drastically streamline” testing and quarantine requirements for travellers.

The changes will take effect on March 29, Lee said.

China reported 4,732 Covid infections on Thursday amid signs outbreaks in northeastern Jilin and Shanghai are stabilising.

About 10% of new infections are from areas not cordoned off in Shanghai, indicating Omicron’s community spread is coming under control and a turning point for the Shanghai outbreak may be near, according to the city’s Covid adviser and infectious disease doctor, Zhang Wenhong.

New York City Mayor Eric Adams will no longer require proof of vaccination for professional athletes and performers, according to people familiar with the matter. He was expected to announce the change on Thursday at Citi Field, home of the New York Mets, and it will immediately take effect.

The rule change comes ahead of the NBA playoffs for Kyrie Irving, a star who has been ineligible to play in Brooklyn because he refused to get a shot. It also arrives two weeks before the start of the Major League Baseball season, meaning that unvaccinated players on the Mets and Yankees can appear in home games.

Daily confirmed new cases in Japan more than doubled to 40,928 on Wednesday from a day earlier, reversing a fall of the past week.

The number of deaths also rose for a second day to 122 cases. Japan lifted the state of quasi-emergency in Tokyo and some other prefectures on Tuesday. Japan has immunised 35% of the population with a booster shot, exceeding the level of the US, according to Bloomberg Vaccine Tracker.

The largest US airlines urged President Joe Biden to immediately end federal requirements for masks on airplanes, along with mandated vaccinations and testing for international passengers coming to the country.

“It is past time” to eliminate the policies, the Airlines for America lobbying group said in a letter on Wednesday, citing the level of Covid-19 vaccinations in the US and the end to mask mandates across much of the country. The testing and shot rule “creates a competitive disadvantage for US tourism,” the carriers said.

China is facing a temporary hit to factory production and a lingering consumer slump amid the strictest Covid controls since the initial outbreak two years ago.

Company statements and high-frequency indicators suggest a drop in output and spending in March after China imposed lockdowns in key cities like technology hub Shenzhen and Changchun, a centre for automakers. Official activity data won’t be available for several weeks still.

Moderna said its Covid-19 vaccine produced a strong immune response in children under six in initial results from a large final-stage trial that showed modest effectiveness in reducing Omicron infections.

Based on the positive results and the need for Covid shots for young children, Moderna will submit the data to regulators in the US and overseas as soon as possible, according to a statement. The company also said it would also apply for US clearance of its vaccine in six- to 11-year-olds, after consultation with regulators.

However, shares slid 4.3% in the US on Wednesday as the efficacy response trailed expectations.

Sweden’s announcement that Anders Tegnell, the mastermind behind the Scandinavian country’s controversial Covid-19 strategy, had been hired by the World Health Organization has turned out to be premature.

The March 9 report by Sweden’s Public Health Agency FHM said that Tegnell had resigned as state epidemiologist to become a senior expert in a group that will coordinate the work between the WHO, the UN Children’s Fund Unicef and vaccine organisation Gavi. Svenska Dagbladet first reported that the announcement was met with “surprise and confusion” within the WHO.

Chinese ports are functioning surprisingly well despite an uptick in Covid-19 cases, ShippingWatch quoted a regional manager at container line Maersk as saying.

Singapore to outline next steps

He was set to speak about Singapore’s virus situation, as well as the next steps, at 11am local time on Thursday. DM/MC