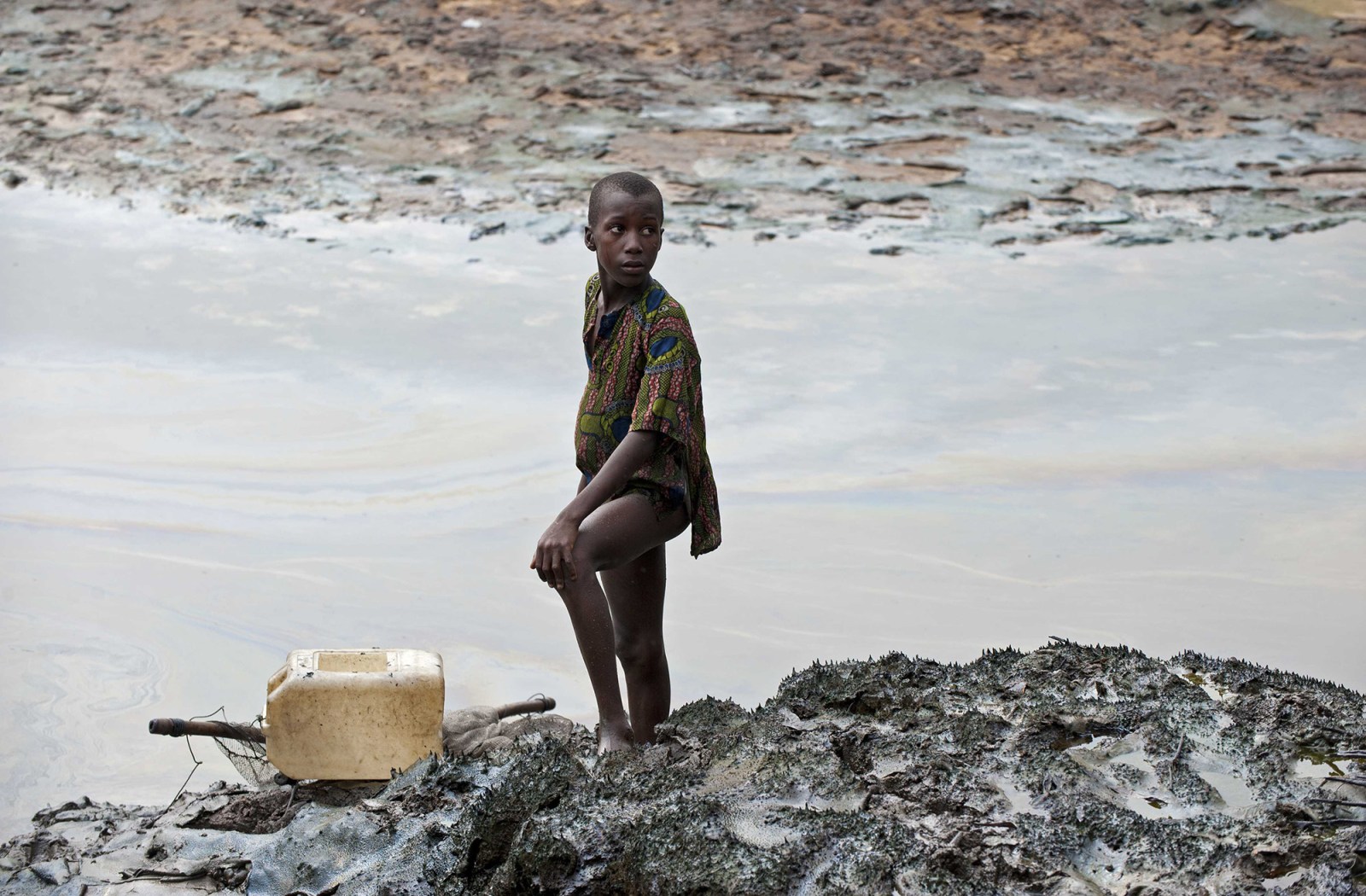 A boy stands on the oil-stained bank of a creek in Ogoniland, Nigeria. (Photo: EPA-EFE / Marten Van Dijl)

The Niger Delta in southern Nigeria is one of the most polluted places on Earth. Decades of spillages from over 50 years of oil operations continue to erode local communities’ health, well-being, and livelihoods.

Ogoniland, located in Rivers State, has a complex history of oil exploration fraught with environmental, social and political problems. While the region doesn’t currently produce oil, incessant spills from the pipelines running through it and looming plans by the Nigerian Petroleum Development Company to resume operations threaten any hope of long-term restoration.

Most oil extraction from the sensitive ecological area of Ogoniland stopped in the early 1990s. But despite subsequent clean-up efforts, the region is constantly set back by spillages from pipeline sabotage, theft, artisanal refineries and pipeline corrosion. This has caused conflict between local communities and multinational oil companies such as Shell, ExxonMobil, ChevronTexaco, TotalFinaElf and Agip, which engaged in petroleum exploration for decades.

As part of the reconciliation process between Shell and local communities, the federal government appointed the United Nations Environment Program (Unep) in 2005 to undertake an environmental assessment. Unep was also mandated to supervise clean-ups in areas damaged by the decades of mismanaged oil operations. Unep’s 2011 report predicted it would take 25 to 30 years to deal with the pollution.

The government only began acting on the report’s recommendations in 2016 — five years after its release. At the time, president Muhammadu Buhari said this marked a turning point in restoring Ogoniland’s fragile ecosystem and the rest of the Niger Delta. That signalled a commitment to clean up other communities devastated by oil spills and provided hope for those relying on water resources for their survival.

However, since 2016, rising oil spills in the Delta have outpaced clean-up efforts and hamper any possibilities of environmental restoration in the near future.

The four Niger Delta coastal states of Akwa Ibom, Bayelsa, Delta and Rivers produce 93% of Nigeria’s crude oil. The National Oil Spill Detection and Response Agency (Nosdra) database shows that of the almost 6,000 confirmed crude oil spillages recorded in these states since 2006 (see map), 32% occurred after 2016. Some 408 confirmed spills have been documented in these states since January 2020 — 21 during this year alone.

More than 75% of spills in Nigeria since 2016 can be attributed to theft and sabotage, mostly by militants and organised crime groups who target the pipeline network. Nigeria lost an estimated $4.5-billion in 2020 due to petroleum pipeline vandalism and crude oil theft. These crimes lead to large-scale spills and environmental destruction, jeopardising clean-up efforts.

The Nigerian Petroleum Development Company’s resumption of oil exploration in Ogoniland will increase these figures and further harm the environment. Since the clean-up started in 2016, 692 oil spills have been confirmed in Rivers State. Sixty of these were in Ogoniland, with an estimated spillage of more than 2,200 barrels of oil. All the spills were attributed to theft and sabotage of the pipeline and corrosion, according to the Nosdra database.

Anyone committing sabotage is liable on conviction to a death sentence or imprisonment of up to 21 years. The Nigeria Security and Civil Defense Corps reported 503 arrests and 122 convictions for offences bordering on pipeline vandalism and crude oil theft in 2021.

This stringent legal framework has not however deterred offenders. Oil spillage due to sabotage by criminal groups, corruption and collusion by state security officials are increasing in the Niger Delta.

The crimes are enabled by the weak implementation of laws, inconsistent oil spill data (which hampers monitoring), accidents and corporate negligence by oil companies. Old and poorly maintained infrastructure is also to blame, as is the lack of commitment among some oil companies to containing spills.

Fyneface Dumnamene, Executive Director of the Youths and Environmental Advocacy Centre in Port Harcourt, told ISS Today that environmental restoration would remain difficult until efforts were made to stop all new pollution. He said multinationals hadn’t provided enough alternative job prospects for people engaging in illegal artisanal refining of crude oil. The Unep report proposed a plan for employment options to stop the water and land pollution resulting from artisanal refining during the Ogoniland clean-up.

Niger Delta environmental rights activist Ledum Mitee told ISS Today that priority wasn’t given to the Unep’s suggested measures to protect households from consuming water from wells, streams and rivers where hydrocarbons were detected. Oil companies did not provide these households with alternative sources of drinking water as planned. These problems make replicating the Ogoniland clean-up model in other polluted areas in the Niger Delta harder.

Nigeria’s government should conduct a comprehensive review of the clean-up seven years after its launch and improve the pace of work by using new technologies. Communities need to be involved through training and awareness that warns of the dangers of spills, theft and sabotage. Adequate government funds should be provided to Nosdra so that the agency can monitor and detect oil spills and take speedy action.

Nigeria’s judicial system must remain a guardian of environmental justice. It needs to stay steadfast as it deals with penalties for environmental crimes committed by oil companies and compensation claims for the affected communities. Otherwise, oil spills in Ogoniland will continue to make the Niger Delta’s future as dark as the substance itself. DM