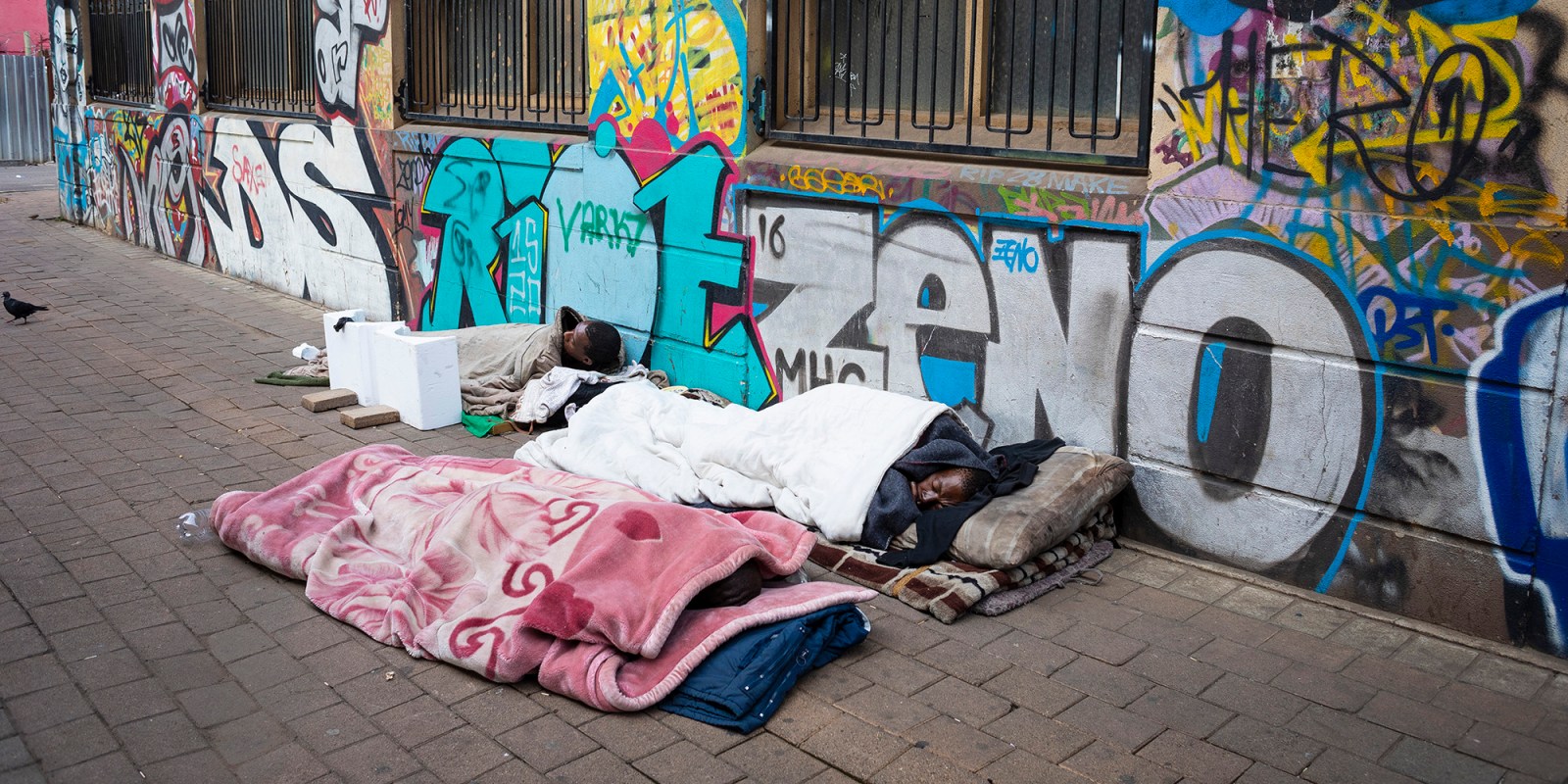 Homelessness has proven to be a spiralling issue across Cape Town. (Photo: EPA-EFE/KIM LUDBROOK)

About 30 people, including members of the organisation and homeless residents, met at the Service Dining Room in town. Devil’s Peak and Vredehoek are adjacent City Bowl suburbs between Philip Kgosana Drive and Upper Buitenkant Street.

DPV Outreach, which has applied for non-profit status, has partnered with Streetscapes, an off-shoot of national non-profit organisation Khulisa Social Solutions, to run an outreach support programme for homeless people.

The programme is led by fieldworker Chantal Sampson. Five years ago, Sampson was living in Van Riebeeck Park in Vredehoek. She had been homeless for five years. After a meeting with Streetscapes and residents, Sampson got involved. Today, she works with Streetscapes as a peer educator and leads the DPV Outreach programme.

On any given day, Sampson might be assisting a homeless person to apply for an ID or reconnect with their family. Among other tasks, Sampson also teaches life skills, organises health assessments, makes appointments for counselling and arranges yoga sessions.

Sampson manages a team of 13 people who were once homeless or unhoused residents in the area. The team cleans streets, picks up litter and sweeps verges.

Within three months of the programme’s inception in December 2021, seven of the 11 team members had found a place to live, with a further two people moving into homes next month. The team members all have bank accounts, most have bought their own cellphones, and three work out monthly budgets for themselves. Sampson’s team report greatly improved interpersonal skills, most have had physical and mental health assessments and support, and 11 team members play football or do yoga.

According to Jesse Laitinen, Streetscapes founder, their approach is geared towards fostering behavioural health. The vast majority of homeless people have experienced a range of traumas. A 300-person survey done by Streetscapes found that half of participants had attempted suicide.

Laitinen said addressing homelessness without engaging homeless people on their own terms is not fit for purpose. Laitinen said that the model favoured by Streetscapes as well as homeless organisations U-Turn and MES, which encourages people to become independent at their own pace, offered a lasting solution.

Jon Hopkins, of U-Turn, presented the findings of a study on the cost of homelessness in Cape Town commissioned by his organisation in collaboration with MES and Khulisa Social Solutions at the meeting on Wednesday.

Hopkins said many people have been living without a home for more than one year, and have substance abuse and mental health issues.

The study estimated the total social cost of homelessness in the city to be over R700-million per year (a sum of private and public spending, not including healthcare costs). Just 16% of this is spent on social support or rehabilitation programmes offered by organisations like Streetscapes or the Department of Social Development.

Hopkins said that the cost of criminalising homeless people is huge and ineffectual. Prison costs R12,000 per person per month, while a programme like the one offered by Streetscapes, which includes full-time employment, housing, rehabilitation, and psycho-social support costs R6,500 per month.

Captain Ezra October of the Cape Town Central police station voiced his support for the initiative. He said police arresting homeless people for petty offences was an unreasonable cost to the State and a distraction from more serious crime. Captain October said that police resources would be better used if there were more programmes like that advanced by DPV Outreach.

Friedlander estimated that there are about 9,000 housed residents in the Devil’s Peak and Vredehoek area. DPV Outreach hopes that with the support of even a small fraction of these residents, this programme can be sufficiently funded.

The group’s most pressing fundraising goal is to raise R22,000 by August to fund Sampson’s year-long auxiliary social worker training. The association has also committed to funding a portion of Sampson’s salary in exchange for her assistance in engaging with local homeless people. Friedlander encouraged residents to donate to the programme on the association’s website. DM