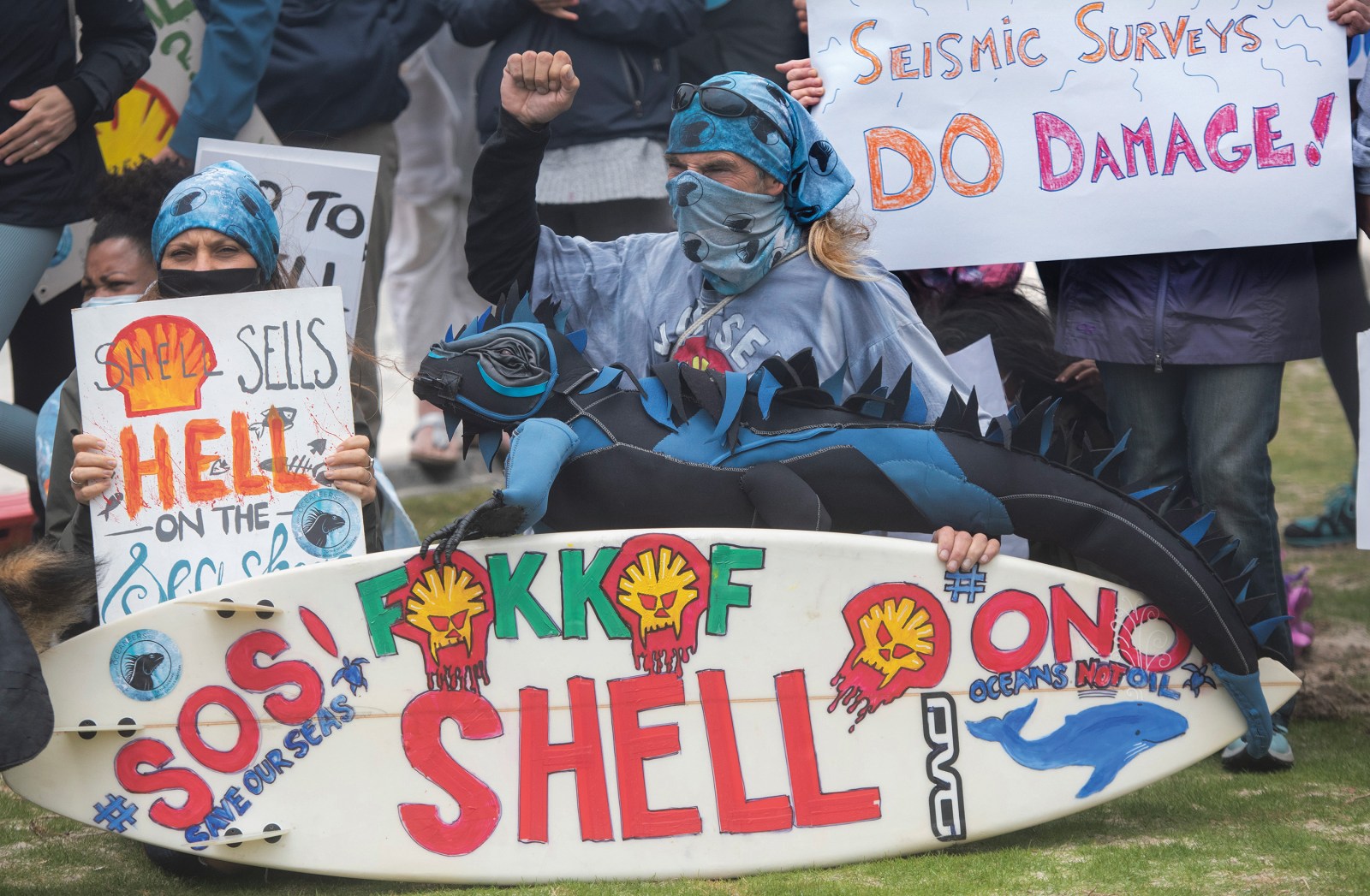 Hundreds of people gathered in Muizenberg, Cape Town to protest against a 3D seismic survey commissioned By Shell along the East Coast on 5 December 2021. (Photo: Gallo Images / Brenton Geach)

Oceans Not Oil, a South African organisation fighting offshore oil and gas exploration, has called on NGOs to submit their appeals after the authorisation of a proposed seismic exploration by Tosaco Energy in the Northern Cape.

With the whole of South Africa’s offshore divided into blocks as exploration rights are granted to big oil companies, NGOs are fighting tooth and nail to stop these surveys from going ahead, while they have been granted interim interdicts against Shell on the Wild Coast and Searcher Geodata on the West Coast.

On 6 April 2022, Oceans Not Oil (ONO) will appeal against the environmental authorisation for both 2D and 3D offshore seismic activity in Block 1, located offshore extending from Alexander Bay to around Hondeklip Bay in the Northern Cape.

“It risks Critical Biodiversity Areas and Ecological Support Areas and local fisheries. ONO will be submitting its appeal by 6 April, considering the 20 days from emailing notification on 17 March 2022. Appeals need to be submitted by 23 March 2022,” she said.

Solomon said the environmental authorisation was granted on 7 March 2022 by the Department of Mineral Resources and Energy.

“Our appeal will go through the appeal process. It will be good if many and robust appeals are submitted. Then Forestry, Fisheries and the Environment Minister Barbara Creecy will authorise and then we will go to court,” she said

ONO’s fight comes after Sasol and the Italian behemoth Eni were granted environmental authorisation to drill for hydrocarbons in the middle of seven protected marine areas in August 2019.

This resulted in an uproar from NGOs, which submitted no fewer than 47 appeals, all of which were knocked back by the national government. But, in mid-June 2021, papers were filed in the North Gauteng High Court that represent the strongest challenge yet.

The rights holders include:

The Green Connection submitted its comments critiquing several aspects of the environmental impact assessment (EIA) process, particularly the lack of procedural fairness, as well as the conclusions reached – notwithstanding information gaps and scientific uncertainty – that should form part of Tosaco Energy’s request to undertake various activities in Block 1, off the West Coast.

The environmental justice organisation said it was becoming increasingly frustrated with the government and its apparent one-sided support for the oil and gas industry.

The Green Connection’s strategic lead, Liziwe McDaid, said companies like Tosaco, along with governments, seemed to downplay the potential damage offshore oil and gas exploration can do to the ocean and environment.

“This includes downplaying the threat to the livelihoods of small-scale fishers and fishing-dependent communities. A key issue is that the government seems willing to break its own rules and regulations to accelerate fossil fuel deals, which, really, having regard to the climate change emergency, should be phased out.

She said there are several types of impact studies that would help to better understand how the activities from any proposed project might affect small-scale fishers and other communities in the region.

“However, in this case, even if these communities wanted the EIA to cover more, it was already decided before the EIA commenced that only the marine faunal and the fisheries specialist studies would be done, as well as what each study would entail. Can we then be surprised that both studies predict impacts to range from negligible to low?”

McDaid said The Green Connection questioned the legality of the decisions taken by Environmental Impact Management Services, the consultants working for Tosaco, and the Petroleum Agency SA (Pasa) during the pre-application phase.

“It was at this stage that the two entities colluded in making a decision that two specialist studies would suffice, without affording stakeholders an opportunity to comment on this pre-application decision,” said McDaid.

She also questioned the conclusions reached in the marine faunal specialist desktop study, which was based, in part, on information contained in a generic environmental management programme report commissioned by Pasa and co-funded by offshore oil and gas companies.

“How is it legal, or even ethical, that the very entity mandated to promote oil and gas exploration in the country [Pasa] is making decisions in the pre-application process, rather than the competent authority [the Department of Mineral Resources and Energy]?

“The two specialist reports and the draft EIA report clearly reveal several gaps in information and scientific uncertainty – such as the impacts of 3D seismic surveys – relating to marine fauna and ecosystems in Block 1, which include critical biodiversity areas,” she said.

McDaid said no acoustic sound modelling had been conducted to assess sound propagation and attenuation in the proposed 3D seismic survey area.

“We also question the exclusion of an assessment of potential negative impacts of likely future exploration drilling (which was excluded from the scope of this exploration’s EIA application), such as the risk of catastrophic oil spills resulting from wellhead blowouts, as well as climate change impacts from potential oil and gas drilling, production and end-use, should commercially exploitable oil and gas deposits be identified.”

She said The Green Connection was concerned that not enough effort was being made to ensure that all the potential negative impacts of proposed projects are considered.

“In addition to understanding, quite thoroughly, what implications these could have for small-scale fishers and other communities. We are already witnessing the devastating socioeconomic and environmental impacts of extractive industries, and with the views of stakeholders and potentially affected communities not being adequately taken into account in decision-making processes, this is a major problem in our country, which must not be ignored.”

Andy Pienaar from the Kobush Development Association in the Northern Cape said they are not satisfied with the handling of the entire process.

“Particularly since many of our people were not represented. Furthermore, while some of the information had been translated we, as the community, did not find the information very accessible.

“We expect, as is required by Nema, that communities who may be affected by the proposed project should be thoroughly involved and understand the information presented. This way we would be in a better position to participate in meaningful ways and ensure that our inputs are also heard and valued. As such, every effort should be made to ensure that those who may be affected are able to attend the discussions,” said Pienaar. DM/OBP