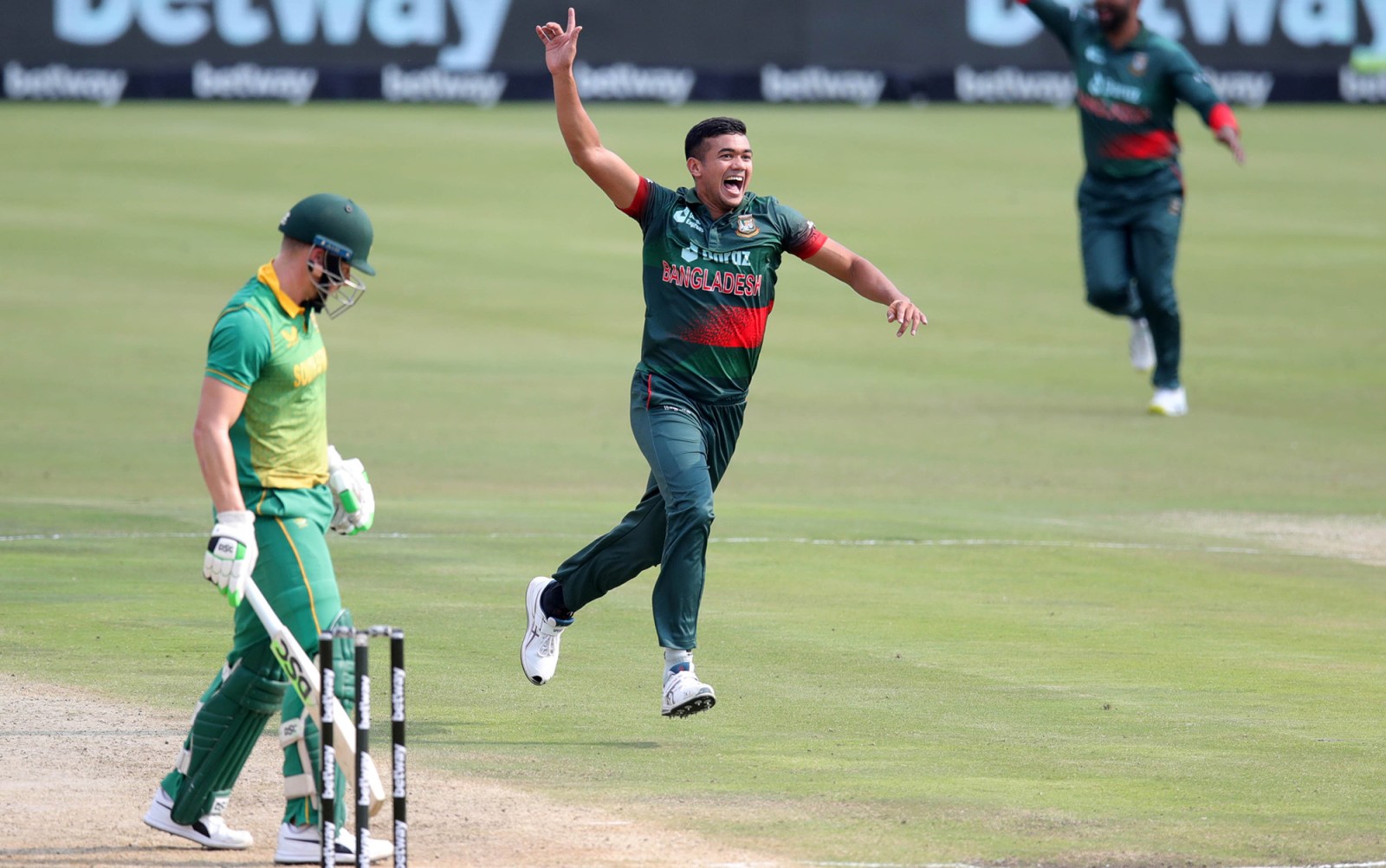 Taskin Ahmed of Bangladesh celebrates the wicket of David Miller of South Africa during the ODI match at Supersport Park, Pretoria on 23 March 2022. Bangladesh won by nine wickets to secure the series 2-1. (Photo: Samuel Shivambu / BackpagePix)

The day started badly for the Proteas with the news that batter Zubayr Hamza had returned a positive doping test sample for the banned substance furosemide, and it went downhill from there.

Bangladesh thrashed the Proteas by nine wickets at SuperSport Park on Wednesday to seal a 2-1 series win, which was richly deserved after they won the first match by 38 runs at the same venue last week. In between, the Proteas won the second meeting by seven wickets at the Wanderers.

Just a few days ago Bangladesh had never won a one-day international (ODI) match against the Proteas in South Africa and now they have a series victory.

It’s hard to recall a worse performance by the Proteas, so outplayed were they in the third ODI, but the tourists deserve praise for their exceptional performance. They knocked off the required 155 for victory with 141 balls to spare for their most emphatic ODI win outside Bangladesh.

While the Proteas were poor, it would be doing Bangladesh a disservice to lay all the blame on the home team’s shortcomings. They were made to look ordinary by some excellent cricket from the tourists. The outcome was as much to do with Bangladesh’s polished skills with both bat and ball as it was with the Proteas’ lacklustre display.

With five of South Africa’s squad leaving almost immediately to play in the Indian Premier League (IPL) starting in five days, it does raise the question of whether they were fully engaged with the immediate task.

Taking the Proteas to Taskin

Bangladesh right-arm quick Taskin Ahmed was the main destroyer as he ripped the guts out of the Proteas’ batting unit after Janneman Malan and Quinton de Kock put on 46 for the first wicket.

De Kock fell in typical De Kock fashion, caught by Mahmudullah in the deep while trying to clear the boundary off off-break bowler Mehidy Hasan Miraz. It was an acceptable risk, but no one could have anticipated the collapse that followed.

The next nine Proteas wickets fell for the addition of a mere 108 runs due to some excellent bowling, coupled with poor shot selection by the South African batters.

Taskin, the big fast bowler, returned impressive figures of five for 35 in nine overs, and after that bright start, South Africa slumped to 154 all out after winning the toss and choosing to bat.

“I think we lacked intent,” Proteas coach Mark Boucher said after the match. “We got off to a very good start with Quinny and Janneman, and we just went to sleep.

“It’s certainly not the way we want to play. After a good start, we want to come in with a lot of intent and take the game forward, and we just didn’t do that.

“They bowled well, but I still think you’ve got to take some risks along the way to create some scoring opportunities, and we didn’t do that. It’s almost like we were going out with the fear of getting out instead of going out to score a total, which if you look at the way the wicket played, was over 300.

“We lacked intensity, which spiralled into a collapse which was the end of us.

“It’s lack of belief in the way that we want to play. We went to Sri Lanka and we played spin very well there, but when we came back to SA and encountered the same conditions, we went back to the old way of playing,” Boucher said.

“We’re still having a lot of chats in trying to get the guys to believe that this is the way to play spin in turning conditions. I don’t think our conditions are like they used to be. We’ve got some Indian conditions in our home country and the ball is turning a bit.

“It’s an issue of belief and having faith in the way that we play. We want to go out there and be proactive, but they didn’t do that today.”

Bangladesh’s run chase was equally impressive as they knocked off the target with the minimum of fuss in 26.3 overs. Captain Tamim Iqbal clipped an unbeaten 87 from 82 balls with 14 fours, while fellow opener Liton Das contributed a more circumspect 48 from 57 balls. The pair shared a 127-run opening stand from 125 balls to crush South Africa’s spirit.

The pair quelled any small glimmer of hope the Proteas had by eliminating risks in the opening overs of the run chase to ensure there were no early inroads by Kagiso Rabada and Co.

The Proteas needed to take 10 wickets to defend such a low total. When Keshav Maharaj, fielding at backward point, dropped Das in the first over off Rabada, it felt like a massive blunder. And so it proved.

Bangladesh coach Russell Domingo understandably looked happier than a cat playing with a ball of wool, considering his history as a former Proteas coach. Domingo is developing Bangladesh into a formidable unit, and their goal of becoming a tough unit away from home is taking shape.

They beat World Test champions New Zealand in New Zealand in a Test earlier this year, and now have added another big scalp to their body of work in a different format. They have won 12 of 18 ODIs in the current World Cup qualification cycle.

Domingo brought in former Protea great Allan Donald as bowling coach, and it’s clear that he has made an impact on the Bangladesh seam bowling unit, who outshone their South African counterparts throughout the series.

“I’m a very proud man, especially a Bangladeshi fast bowler getting a five-fer, getting a Man of the Series and winning the series,” said Tamim.

“Everybody thinks about [Bangladesh] spin, but the fast-bowling department has been brilliant for the last two years. We take a lot of pride in ODI cricket. We believe we are a very good side. There is no team in the world that we haven’t beaten.

“This is one format where we are very comfortable and we have been doing well the last five, six years. The missing part was winning overseas.”

For the Proteas, it was a step backwards in white-ball cricket after they emphatically beat India 3-0 in January. That series did not carry qualification points.

The series loss to Bangladesh has complicated South Africa’s automatic qualification process for the 2023 ODI World Cup in India.

South Africa are currently ninth on the standings. Only eight teams will automatically qualify for next year’s World Cup.

Meanwhile, Test batter Hamza failed a doping test for the diuretic furosemide. The medication is used for heart and lung issues, but has also been used by steroid users to flush the system.

“Zubayr is not disputing the positive test, is cooperating fully with the International Cricket Council (ICC), and has agreed to a voluntary suspension commencing immediately whilst written submissions are presented to the ICC,” a statement from Cricket SA said.