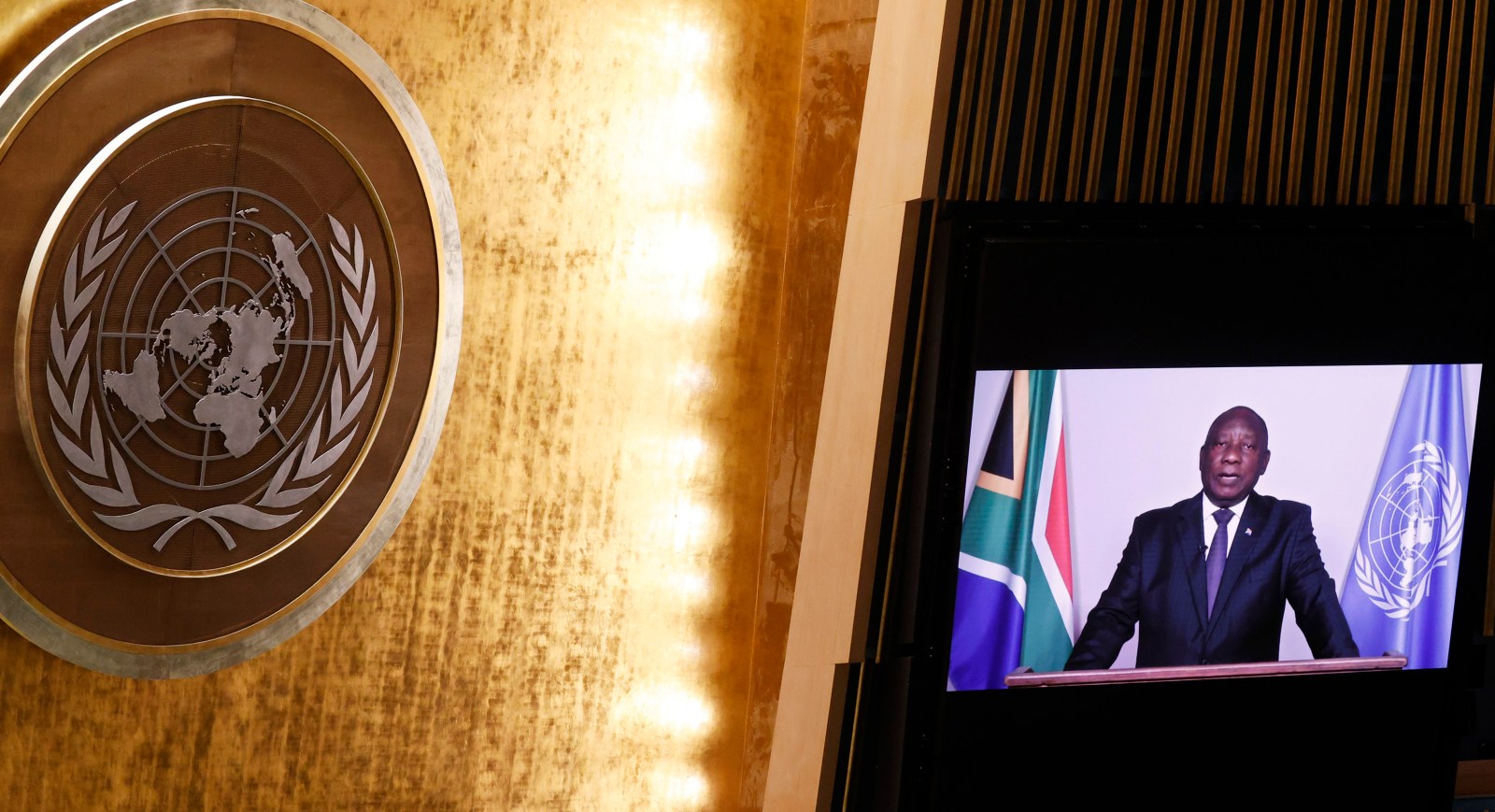 Western countries have accused South Africa of trying to help Russia escape blame at the UN General Assembly in New York by proposing a draft resolution on providing humanitarian aid to Ukraine – without mentioning Russia at all.

But South Africa insists it is simply trying to get a resolution passed that all parties – most importantly Russia – will accept, so that the humanitarian resolution will be implemented.

South Africa’s draft resolution is in effect a compromise between a resolution that Russia tried to table at the UN Security Council last week and another one that has been drafted by France and Mexico in the UN General Assembly.

The French-Mexican resolution clearly identifies Moscow’s aggression as the cause of the humanitarian crisis in Ukraine, whereas South Africa’s draft resolution does not even mention Russia.

Western countries, in particular, have criticised this approach, insisting that Russia should be named, and presumably, shamed. The British embassy to the UN in New York implicitly criticised South Africa’s draft resolution in a tweet on Tuesday, saying: “Any meaningful humanitarian resolution must acknowledge Russia’s war is causing Ukraine’s humanitarian crisis.

“The only way for the crisis to end is for Russia to withdraw. Any text that doesn’t recognise this fact turns a blind eye to Russia’s brutal tactics.”

But South African diplomats responded by saying that they don’t want “political issues” to sabotage humanitarian assistance to Ukraine.

“Political issues that may lead to member states not agreeing to a text should be addressed elsewhere.

“An immediate cessation of hostilities should be the first step in ameliorating the humanitarian situation.

“It remains crucial to find consensus on humanitarian matters. Diverting the focus on other matters will lead to divisions and a failure to get agreement on outcomes.”

Diplomats told Daily Maverick that South Africa was not competing with other countries to get its resolution passed, and nor was it being used by Russia as a “stalking horse” as some critics had suggested.

“The problem is that we have two texts on the table: the Russian text and the Western text. The Russian text in the Security Council will not pass,” an official added, mainly because it did not recognise Ukraine’s territorial integrity and sovereignty. China and India have both refused to co-sponsor the Russian text, according to media reports, and South African officials said they would also not have co-sponsored it.

But Pretoria is saying, conversely, that the Western countries are refusing to accept any negotiation on their text. An official said that attribution of blame for the humanitarian crisis would be ideal. But Russia would not accept that. “And so how will we get them to abide by humanitarian principles?”

So South Africa had essentially adapted the French/Mexican text by removing the attribution to Russia. The South African draft resolution commits the parties to humanitarian principles and calls on the UN secretary-general to report on their compliance with their commitment to those principles.

The officials said attributing the humanitarian crisis to Russia in this resolution was in any case not necessary as the UN General Assembly had already passed a resolution on March 3 condemning Russia for its aggression against Ukraine and demanding its withdrawal. That resolution had framed the context of the conflict.

All UN members – including South Africa – had to abide by that resolution, whether they liked it or not. South Africa did not like it and was one of 35 countries that abstained from that previous resolution on the grounds that it believed it was unbalanced. But this did not mean it was denying Russia’s responsibility for the humanitarian crisis, SA diplomats said.

They added that the UN General Assembly was expected to vote on the humanitarian resolution on Wednesday. South Africa would have to see if the Western countries were prepared to amend their text to accommodate Pretoria’s concern before deciding whether or not to vote for it.

The fracas in New York over the wording of a humanitarian resolution comes as Russian bombs and missiles have been pulverising Ukrainian cities, apparently targeting civilian facilities to try to break the morale of the Ukrainian people. This has killed thousands of civilians and forced about 3.5 million to flee the country.

The current focus of Russia’s assault with aerial and naval artillery and missiles is the southern city of Mariupol on the Black Sea coast which has largely been reduced to rubble, according to media accounts of refugees from the city. Russia has offered to cease its bombardment if Mariupol raises the white flag, but the defiant city has refused to do so.

She said she had forwarded the request to Kyiv but had not yet received a response. Two weeks ago Ramaphosa announced that he had called Russian President Vladimir Putin to hear his view on the “unfolding situation between Russia and Ukraine”.

Ramaphosa announced at the same time that he had been approached by an unnamed third party to mediate in the conflict. He was widely criticised for not also calling Zelensky to get the other side of the story.

At the time, Abravitova noted that it took two sides to mediate and that South Africa had not discussed mediation with her government. And on Tuesday this week, though disclosing that Pretoria had requested a teleconference for Ramaphosa with Zelensky, she said the South African government had still not mentioned anything about mediation.

On Tuesday, the Democratic Alliance leader, John Steenhuisen, told foreign diplomats in Pretoria that although the ANC government was claiming to be neutral in the conflict, it was clear that it was on Russia’s side.

“‘We can’t pick sides,’ said President Cyril Ramaphosa, before going on to do just that by blaming Nato and the West for Ukraine’s devastation.

“No one believes that the ANC has not already picked their side. No one has fallen for their ruse of ‘neutrality’.

“President Ramaphosa might have chosen his words carefully to avoid stating outright his support for the Russian cause, but his ANC comrades were not always so careful.

“When the defence minister and the chief of the defence force attend a cocktail event in honour of the Russian military on the very day of the invasion, you know which side they’ve chosen.

“When the ANC in the Western Cape attend a Russian consulate function celebrating 30 years of diplomatic relations between the countries immediately after the start of the invasion, you know which side they’ve chosen.

“And when Social Development Minister Lindiwe Zulu proudly states that ‘Russia is our friend, through and through,’ as Russian bombs rain down on apartment buildings and hospitals in Kharkiv and Mariupol, you know which side they’ve chosen.

“Let me be very clear: The invasion of Ukraine by the Russian Federation under Vladimir Putin is an act of war for which there is no justification.

“There is no moral ambiguity in this situation. The line between wrong and right has not been this clearly drawn since the 1940s, and the vast majority of nations were quick to take a position on the right side of that line.

“Most of the world cast its vote in the United Nations to condemn Russia’s actions and call on Putin to withdraw his army.

“The vast majority of nations have approved economic sanctions against Russia in an effort to compel it to cease its hostilities.

“The vast majority of world leaders have spoken out clearly and strongly against this violation of international law.

“But South Africa and its President are not among them.” DM