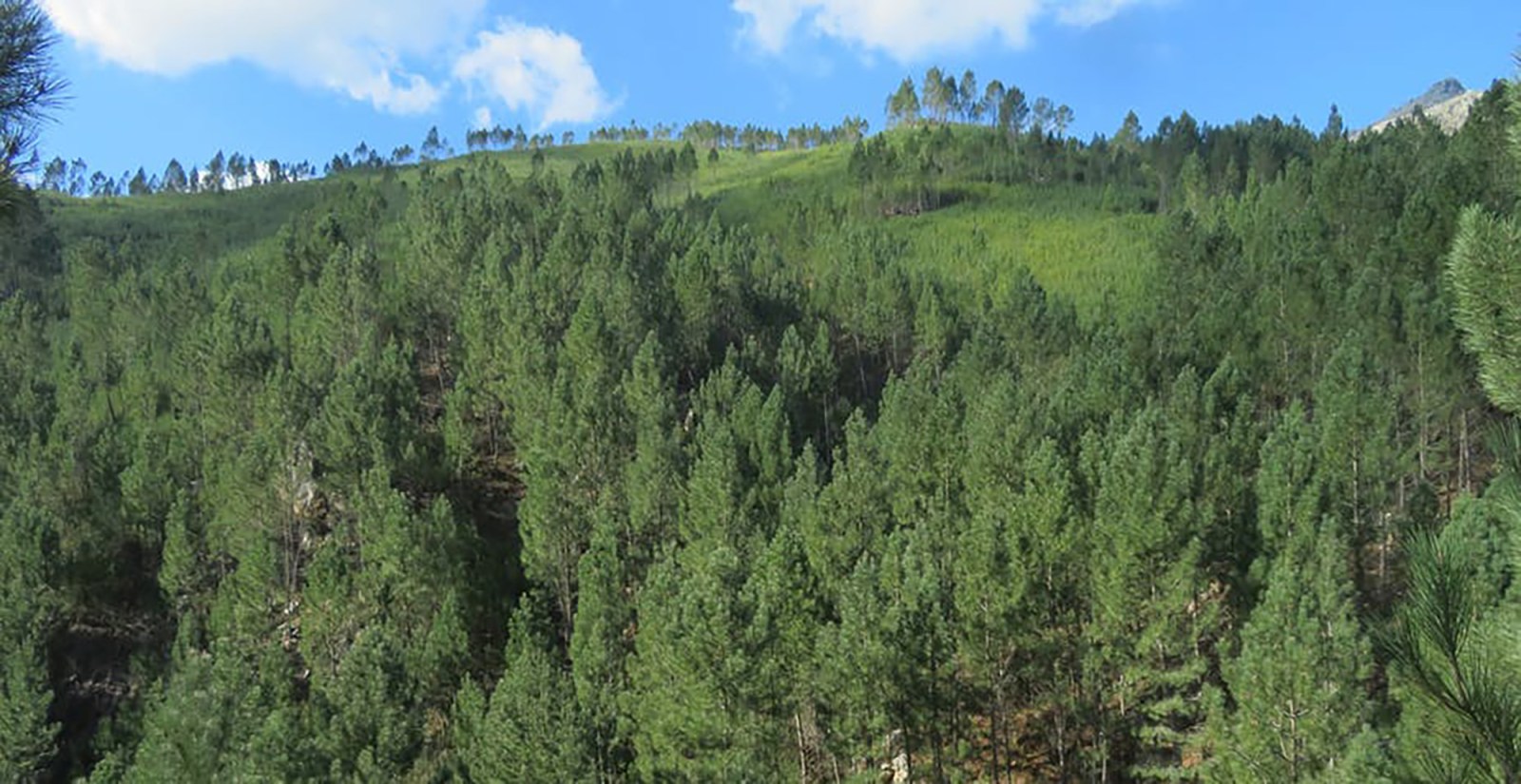 Alien pine trees, which use substantially more water than the native vegetation of the Cape Mountains, reduce river flows to dams that supply the city’s water. Photo: Martin Kleynhans/The Conversation

The climate crisis is not the only driver of water scarcity. Poor management, services, and infrastructure can easily override the benefits that nature-based solutions could offer.

Droughts in water-scarce regions are being aggravated by human-driven climate change. While rainfall reduction is the main driver, increased temperature and evaporation can also play a role.

Another influence on drought severity is the condition of the catchment area where rain falls and drains into rivers. Important factors here include the amount and type of vegetation covering the catchment and soil characteristics.

One way of offsetting the impacts of climate change on water resources is catchment restoration, which can involve revegetation, wetland restoration, gully rehabilitation, and alien tree clearing. This is one of several types of nature-based solutions, which focus on reducing climate change impacts through working with nature.

But it’s not easy to tell what difference restoration makes on the impacts of human-aggravated changes in climate on water availability during droughts.

In a recently published analysis, we took a closer look at the role of climate change and catchment conditions during the 2015-2017 Cape Town “Day Zero” drought. This drought led to one of the most serious water crises experienced by any city in the world in recent times. The drought arose from a prolonged shortage of rainfall and, consequently, river flows, which progressively depleted reservoir storage in the area.

We wanted to see whether clearing alien trees from mountain catchments where the city’s water comes from would have lessened the impacts of climate change on the drought. This is the first study that has looked at the potential for nature-based solutions to buffer society from extreme event impacts directly linked to human-driven changes in the climate.

We found that clearing alien trees before the drought hit could have reduced the impact of climate change on water supply during the “Day Zero” drought. But it could not have removed all of the human-driven climate change impact on water availability.

In South Africa, invasive alien tree clearing is a well-known form of catchment restoration. These trees have spread across many mountain catchments critical for water supply. Alien trees use substantially more water than native vegetation because they are taller, have greater leaf areas, and have deeper root systems. These characteristics increase the amount of water lost due to transpiration from the tree, compared to native plants, leaving less water for river flow and groundwater recharge. Impacts from alien trees on water are felt especially during drought periods when water is most needed.

This situation is not unique to South Africa. Studies across the globe confirm a decrease in water yields in response to afforestation (planting trees).

Human influence on the rainfall shortages and reduced river flows

Between 2015 and 2017, a very rare drought event — the worst since 1904 — pushed Cape Town into a water crisis. Researchers have previously found that climate change made the reduction in rainfall that triggered the crisis three to six times more likely.

The focus of these studies was on the rainfall shortage. But Cape Town’s water is dependent on river flows from distant mountainous catchments. Water flowing from these catchments is captured and stored in six large dams. During the drought, dam levels dropped to less than 20% of their capacity.

Our analysis aimed to see whether clearing alien trees from these mountain catchments would have lessened the impacts of lower rainfall from climate change on river flows.

Using climate models and a hydrological model we simulated worlds with and without human-driven climate change and with and without catchment restoration and maintenance. We did this for two mountain catchments typical of those that supply the Western Cape Water Supply System which feeds Cape Town’s water delivery.

Similarly to previous work, we found some, but not a very large, influence of climate change on evaporation.

An important insight from our analysis is that fully clearing the catchments could not have completely offset the climate change impact.

Also, in many cases, climate change is not the only driver of water scarcity. Poor management, services, and infrastructure can easily override the benefits that nature-based solutions could offer.