Letters to Lionel: A book about courage, fortitude, promise and love 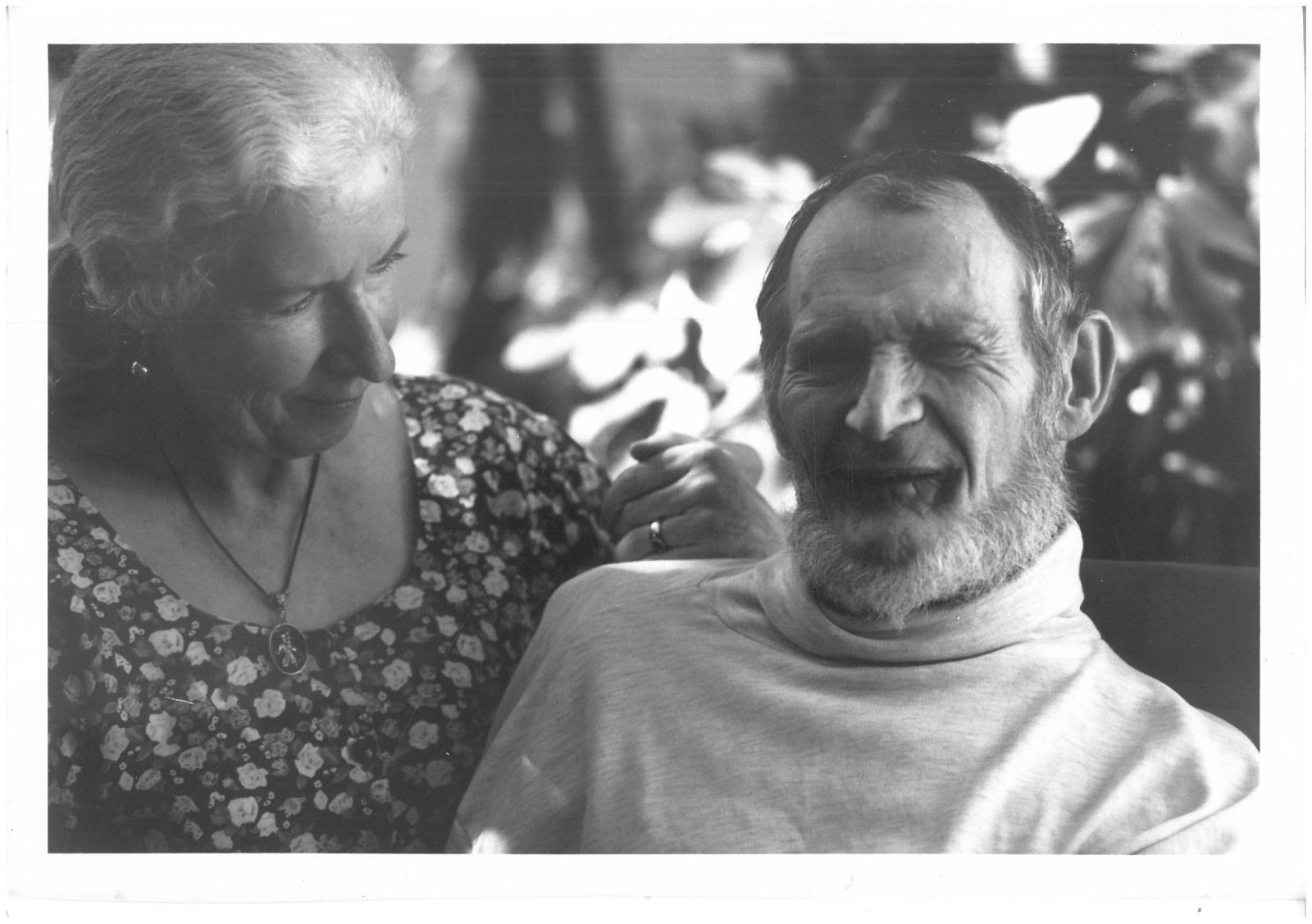 In the year following Lionel Abrahams’ death, his wife Jane Fox wrote him a series of letters. ‘Letters to Lionel’ is a piercingly honest book about the ‘unbiddable nature of a love’ that continues after death.

“He must have known how he inspired writers, but did he know, I wonder, how he inspired all romantics, every believer in the serious and unbiddable nature of love?” Annabel Lawson wrote to Jane on Lionel’s death.

Letters to Lionel is a piercingly honest book about the “unbiddable nature of a love” that continues after death.

Seventeen years after writing the letters, Jane Fox rediscovered them. “I wasn’t really thinking of publishing them but I fished them out and gave them to some friends to read and they encouraged me to go ahead.”

The format of the book is a series of vignettes referred to as “snapshots” – interspersed with 23 letters.

“As we read,” Prof David Medalie writes in the introduction to the book, “we realise that the shape of Letters to Lionel makes perfect sense. The chronology is not disturbed, the two narratives are not discrete. They do not interrupt each other. They are interwoven just as the presence of Lionel and his absence are interwoven. Memories of him flow into the present in loving simultaneity. For Jane and for us, Lionel comes alive again.”

Abrahams and Fox married relatively late in both their lives, but their life together from 1986 until Lionel’s death in 2004 – writing at its core – was profoundly meaningful and nourishing for both of them. Abrahams published some of his best works during these years and Fox became a noted novelist, playwright and biographer.

Lionel Abrahams “was a South African writer whose importance is difficult to overstate”, Medalie writes. “Not only was he a very fine poet and prose writer and incisive critic and polemicist, but he was also a mentor to many other writers. He shaped the course of South African literature.”

Among his many efforts to foster South African writing, Abrahams founded two literary magazines, The Purple Renoster and Sesame, and a publishing house, Renoster Books, which published the first works by celebrated black writers including Oswald Mbuyiseni Mtshali and Mongane Wally Serote.

Disabled from birth, he suffered from a debilitating, worsening condition called Torsion Dystonia, which affected the muscles in his legs and arms and made it difficult for him to speak.

“His creative spirit, his intellect with all his acuity, needed daily to contend with what he called ‘the failures of the flesh’,” Medalie writes.

In one of her letters, Fox writes: “I can look at your wheelchair unmoved, but when I came across the prodder unexpectedly the other day it seemed to encapsulate all your effort, all your pain, all the devotion you must have put into working every day, every day, your whole life.

“So I put it away as a holy relic. One day somebody will find it and throw it out. I cannot bear that you will never read any of this. I realise how much I wrote just as a gift to you. But now, swiftly, the thought comes, it is no gift if I stop doing it because you aren’t here.

“But I seem to have no creative impulse at all, except in so far as writing to you is one. I can hardly read it to the Monday workshop.” [Letter 3]

Despite his physical struggle and deteriorating health, Abrahams continued unfailingly throughout his life to guide and encourage established and aspirant writers in weekly writing workshops.

“I try to teach an attitude to the work that is at once selfish and generous. That embraces hard discipline for the sake of self-realisation; that nurtures the hungry inner self in order to give something rich away,” was one of the ways he described his attitude to the workshops.

Fox has continued to honour his legacy, facilitating weekly meetings for writers.

“On Monday there were twelve of us. Amazing. It is as though they are coming to read to you as much as ever. I want to trawl through your writings and find bits for them.” [Letter 3]

Many are anecdotes of half a page, but others are full chapters, such as the story of the establishment of the Herman Charles Bosman Society in Groot Marico in 1993.

“Then it is Lionel’s turn. He speaks quietly and slowly, telling of his love for  Herman when he himself was one of his students, how Herman had eventually become his mentor and friend when Lionel left the university, of how after HCB’s untimely death, he had taken on the task of collecting and editing his written works and seeing them through to publication.

“He speaks modestly, minimising his own part in making the work available to everyone. When he stops speaking they clap and clap, then they are on their feet clapping wildly, and Lionel weeps a little.” [Snapshot 17]

Bosman’s influence on Lionel Abrahams was “absolutely fundamental”, Fox says. “Lionel met him when he needed him most.  He was a tutor at Damelin College and he very quickly picked up that Lionel could write stories. After Bosman died, Lionel became his unofficial literary executor.”

Much later, Stephen Gray published the remainder of Bosman’s stories.  “This upset Lionel slightly, because he thought Herman would not have felt they were up to standard. Lionel was very meticulous,” Fox says.

Another longer piece is about the trip the couple made to Israel.  “Occasionally, shadows darkened our relationship. The trip to Israel held both tension for us and potential tragedy for a friend.”

“In Tel-Aviv, we sit with friend Riva Rubin. Her son is serving in the Israeli army. There have been months of tension. Every time the army mobilizes, Riva has to drive him to the frontline of the fighting. ‘I am his mother,’ she cries to Lionel. ‘How can they make a mother drive her son to battle?”’ [Snapshot 10]

In one of the letters, Fox writes: “A little face, dominated by the eyes, green-hazel, lighted from deep within by the soul you were always doubtful about, filled with compassion and intelligence. I remember what you said when we had only been acquainted for a few weeks. I asked you whether you thought we had immortal souls. ‘I have my suspicions,’ you said, grinning.” [Letter 23]

As Medalie intimates, those who knew Abrahams will sense his presence while reading this book: his sensitivity and compassion, his acute insight and wisdom, his wicked humour.

“I had a very strong sense of him being with me,” says Fox. “In fact, I mention that in some of the letters, a very strong sense of him still being there and putting things into my head. Nothing ‘woo-woo’ at all, but just an idea in my head and I would think: I bet Lionel put it there because it was so much the kind of idea he would have had, or the kind of joke he would have made.”

“I feel you as almost a palpable presence filling the space which I can encompass with my arms, reaching right down into me with my breath,”  [Letter 13]

One of the snapshots is of Fox at Abrahams’s death bed. His health had deteriorated to such a degree that surgery was not an option and he would have required being on dialysis almost daily.

Fox writes: “You knew more surely than I did, that it was time to go. The fact that you slipped away so easily, that you waited for me to get there so I could help you through the gate of death, the fact that it never occurred to me to call for help, for resuscitation, that I realised straight away what you were about and that I must help you through it…”  [Letter 10]

The book leaves the reader with a sense of the power of words and narrative to convey courage, fortitude, promise and love.

“I made a promise to you that whatever should befall, I would try to meet it with the same courage that you always had. You don’t need your mantle of courage now. (Do you?) Now it can fall around my shoulders.” DM/ ML

The book is published by Porcupine Press. To order a copy, email Jane Fox at [email protected]