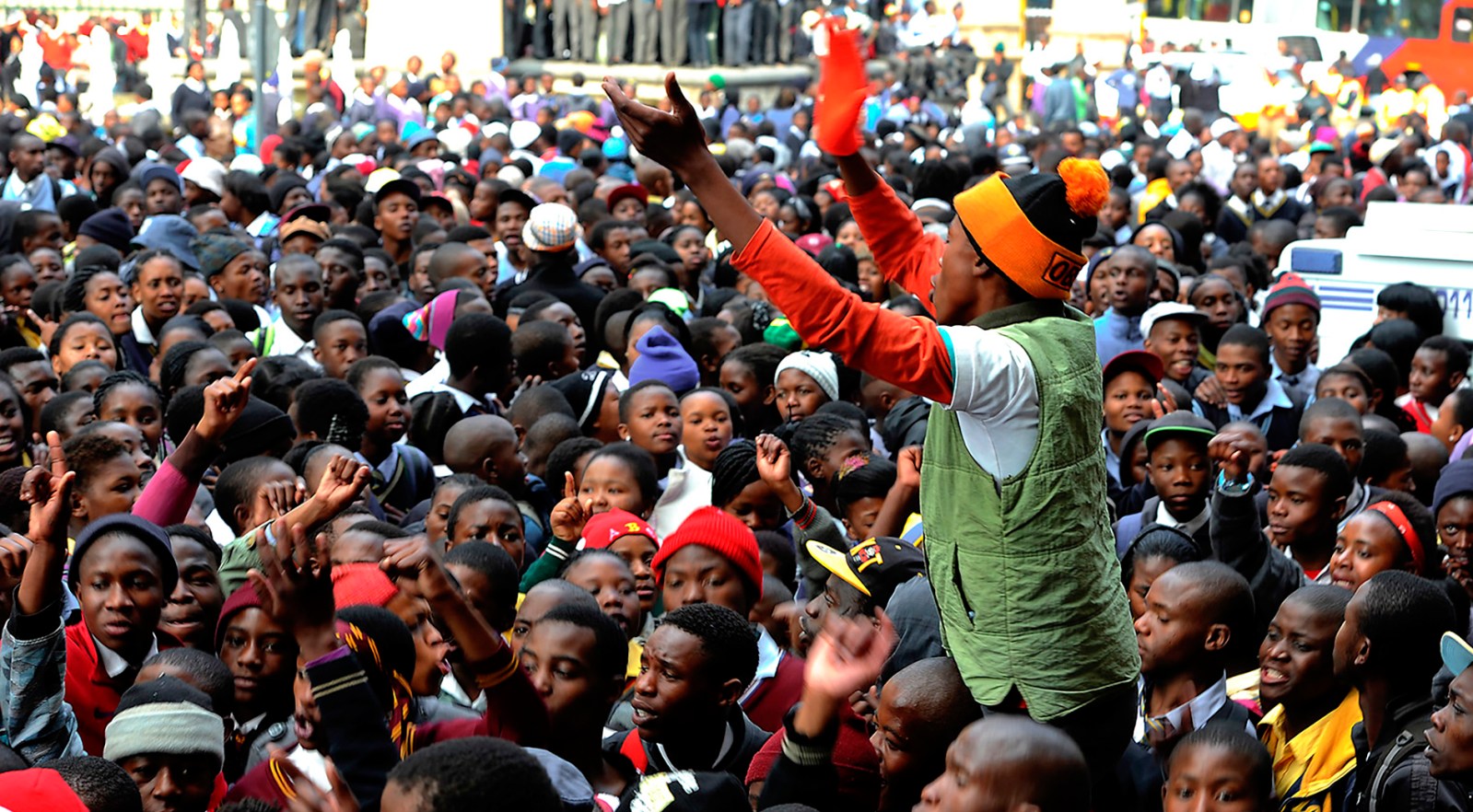 Pupils from townships around Gauteng march to the Department of Education on 30 July 2014. Led by the Congress of South African Students, they were protesting against a shortage of textbooks and other learning materials. (Photo: Gallo Images / Foto24 / Felix Dlangamandla)

Faced with rising authoritarianism and populism, school-based democracy and human rights education is a proven way to enhance citizen engagement with political processes and improve the quality of citizenship in general.

The right to education is guaranteed by Section 29 of the South African Constitution. Given South Africa’s history of racialised inequality in education, campaigns and court challenges to advance the right to education have focused mainly on the interests of individual rights holders to gain access to a decent school or tertiary facility, or the essentials for learning such as textbooks.

The role of human rights education has been missing from the discourse on the right to education.

The need for a specific focus on human rights education is clearly stated in the Universal Declaration on Human Rights, which says (with our own emphasis):

Education shall be directed to the full development of the human personality and to the strengthening of respect for human rights and fundamental freedoms. It shall promote understanding, tolerance and friendship among all nations, racial or religious groups, and shall further the activities of the United Nations for the maintenance of peace.

The first goal is to enable an individual to reach her or his full potential, which requires the state to provide a particular standard of education for each rights holder. The second goal is premised on human rights education so that individuals are taught specific values and principles such as the important role of human rights, tolerance and peace. In this way education can strengthen a culture of human rights within and among nations.

In December 2011, the UN General Assembly adopted the United Nations Declaration on Human Rights Education and Training (HRET), which asserts that everyone has the right to know, seek and receive information about their human rights and fundamental freedoms. HRET is broadly defined as all forms of learning, education and training directed toward developing a universal human rights culture.

The UN definition encompasses three components: knowledge and skills; values, attitudes and behaviour; and taking action to defend and promote human rights. It recognises that HRET is a lifelong process that includes all parts of society, at all levels, and should be based on principles of equality.

In South Africa, our National Curriculum Statement for Grade R to Grade 12 contains a commitment to the teaching of civic principles such as inclusivity, environmental and social justice and human rights.

Researchers, analysing human rights education in South African schools, note that it occurs mainly in life orientation and to a lesser extent in subjects such as history and social science. Researchers Russell, Sirota and Ahmed note that while “human rights discourse is prevalent in South African textbooks, in general it is limited to conveying knowledge about human rights rather than instigating students to act on behalf of protecting their rights [or the rights of others]”.

They note too that while most human rights education is to be found in life orientation, this subject is often “deprioritised and undervalued” in the schooling environment. Thus, the teaching of human rights is relatively limited in the curriculum, and it also appears to be abstract and disconnected from its relevance to everyday life in South Africa.

Perhaps South Africa should look at how human rights education has been undertaken in other countries. For example, in Ethiopia the UN Convention on the Elimination of All Forms of Discrimination against Women was rewritten in clear and simple language, article by article, while those being educated were asked to speak from experience about each specific provision of the convention.

Unfortunately, the world seems at times to be moving in the opposite direction. Authoritarianism and populism are undermining human rights and democracy in many parts of the world. South Africa is no exception – just think of the xenophobic rhetoric that is all too common.

It is time that we begin to push back against this and take active steps to strengthen our democracy and civic values by, among other things, taking democracy and human rights education much more seriously.  School-based democracy and human rights education, in particular, is a tried-and-tested method to enhance citizen engagement with political processes and improve the quality of citizenship in general. South Africa is currently doing this in our schools to some extent, but we need to do this better and more effectively.

As part of our effort to improve our human rights culture and human rights education, SECTION27 together with the Council for the Advancement of the South African Constitution (Casac) recently hosted a lecture series to hopefully catalyse social movements and civil society to begin discussion, training and action to promote civic education within their own constituencies in a more sustained manner.

We similarly call on the government and in particular the Department of Basic Education to take steps to enhance democracy and human rights education. One of the practical ways to do this would be to begin to popularise A Promise to South Africa, which could be regularly made by pupils in our schools and by citizens in various other settings.

We believe that the regular, public verbalisation of a common commitment to the Constitution along the following lines would help to strengthen the human rights culture in our country:

I promise that I will support and defend the Constitution of South Africa; that I will work to heal the divisions of the past and contribute towards an inclusive, non-racial, non-sexist society based on democratic values, environmental and social justice; and that I will strive to build a united South Africa that takes up its rightful place in the family of nations. May God Bless Africa. Nkosi Sikelel’ iAfrika. Morena boloka setjhaba sa heso. God Seën Afrika. DM/MC

Lawson Naidoo is the Executive Secretary of Casac and Faranaaz Veriava is Head of the Education Rights programme at SECTION27.