Black Beauty: The story behind Marmite 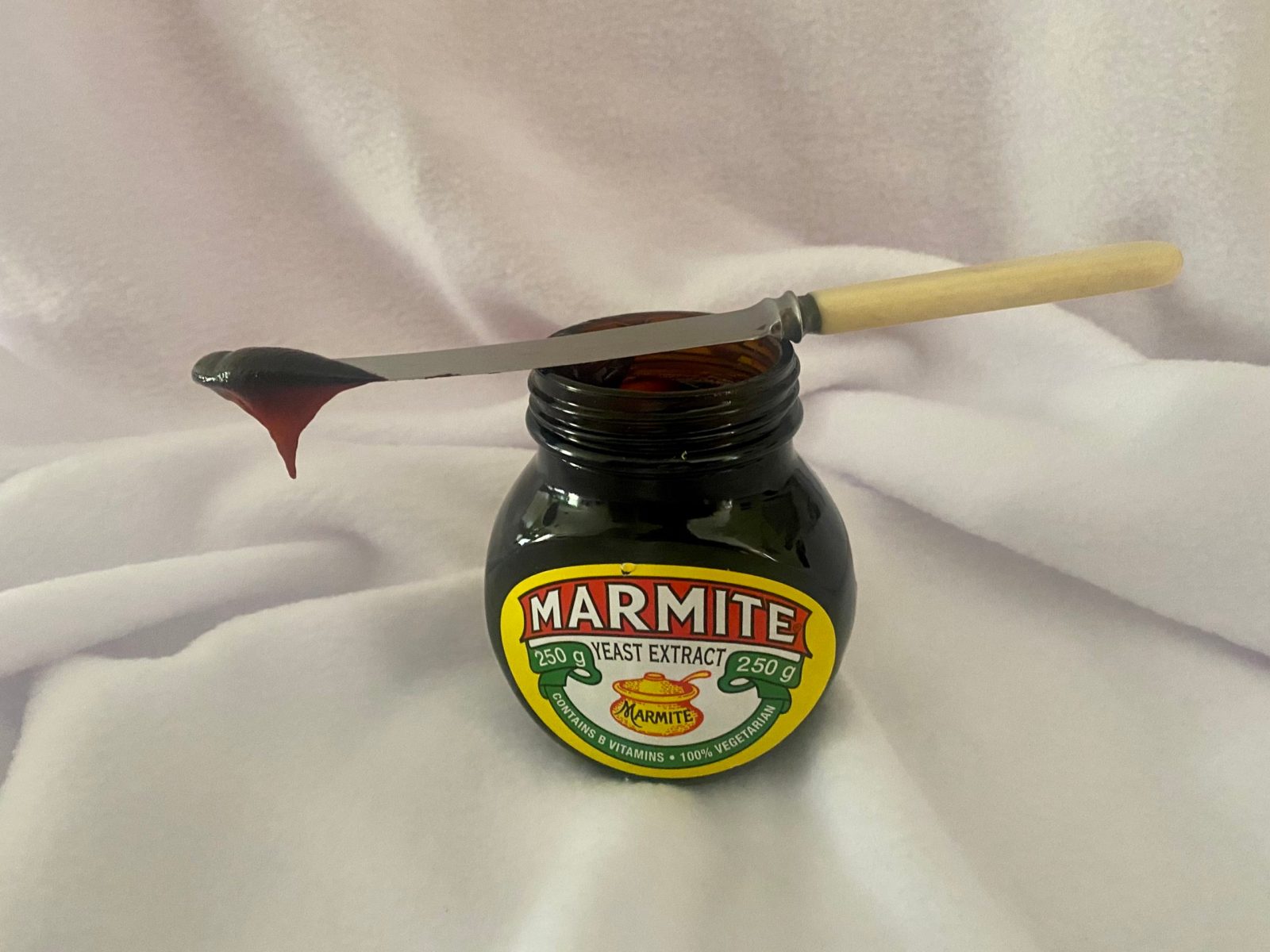 Marmite, yes I might well have some. (Photo: Bianca Coleman)

The tar-black paste that we smear on toast has its roots, not in vegetables, but in beef. Even though there’s none in it.

Marmite, the indefinable gloop with an indefinable taste. If anything, it tastes of everything. It’s as if every ingredient in the world has been put into a big pot and cooked down to make a pulpy Stygian mess that surely must have had the first humans who ever saw it stare into the black void and think: I’m not eating that! Then somebody must have sauntered along with a slice of toast, dipped it in, sighed and swooned, and here we all are, desperate to the point of meltdown to get our Marmite back.

Marmite stands alone in the world of food. When there’s none on the shelves, all other products in the vicinity appear diminished. The shelf itself seems insecure, as if it might topple over for the lack of a limb that’s gone AWOL.

It’s no coincidence that Marmite tastes beefy, even though it is made entirely of vegetable matter. It owes its invention to a German scientist who formulated a way to manufacture beef extracts, which led to the development of the Oxo brand of beef court bouillon cube. That’s right: Justus Freiherr von Liebig, the principal founder of organic chemistry, invented the beef stock cube, but he also went on to play a significant role in the creation of a substance made with no meat in it whatsoever yet which has an undeniable “meaty” character and flavour: Marmite.

Von Liebig, who identified nitrogen (N), phosphorus (P), and potassium (K) as essential to plant growth, among a slew of massive scientific achievements, also developed a theory of nutrition. Key to this was his belief that both meat fibre and meat juices were important to a diet, and argued that cooks should sear meat in order to capture these juices, but not overcook them which would cause the liquids to evaporate. The ever-combative Wikipedia argues that it is not true that searing holds in the juices, but that is nonsense. The proof is in the searing and the fact that those juices are still in there. Anyone who has grilled a steak knows that.

“Liebig’s extract of meat” followed, a beef extract intended to help feed Europe’s poor. Having created his formula for producing beef extract, Von Liebig found the cost of meat prohibitive in Europe so cast around for alternatives. So, in 1865, says Wikipedia, “Liebig partnered with Belgian engineer George Christian Giebert, and was named scientific director of the Liebig’s Extract of Meat Company, located …?

Later in the 19th century, Von Liebig partnered with Henry Enfield Roscoe, a British scientist, to develop a similar product, which was named Oxo, and which was registered some years after Von Liebig’s death and released to the market first in liquid form and, from 1911, in solid cubes, the precursor of today’s stock cubes.

The subsequent invention of Marmite was by then inevitable. Though it might not be entirely accurate to say Von Liebig invented the vegetable spread, as Wikipedia puts it, he did invent “the product that was to become Marmite” when he discovered “that brewer’s yeast could be concentrated, bottled and eaten”.

The Marmite Food Extract Company was created in Burton upon Trent, Staffordshire, in 1902, 29 years after Von Liebig’s death. It’s called Marmite because it used to be made in, and even sold in, earthenware pots called, in French, a marmite, pronounced mah-meet. That’s the little cauldron-like pot you still see on a jar of Marmite today (when you can get one, sigh). From 1902 to the 1920s, it was sold in little earthenware marmites, but then replaced by the glass jars we know.

The discovery of vitamins in 1912 boosted the spread’s sales and image, thanks to the mass of vitamins it contained, especially the B12 complex. World War II was looming, a thiamine (B1) deficiency called beriberi was prevalent at the time, and Marmite became part of every Tommy’s rations.

By the later decades of the 20th century, Marmite Limited had become a subsidiary of Bovril Ltd (the shame!), which was bought, says Wikipedia, by CPC International which renamed itself Best Foods in 1998. That company merged with Unilever in 2000, so they now own the Marmite trademark.

Why that intense umami flavour? That’s in the glutamates that it’s packed with. They’re flavour-enhancing compounds based on glutamic acid and the salts it contains. In short, your body craves Marmite because it craves vitamin B12, and that umami hit tells your brain that that is what is in there.

And then, one day, there’s that gaping maw on the supermarket shelves where Marmite should have been. And don’t it always seem to go that you don’t know what you’ve got till it’s gone, as Joni Mitchell sang. Like that homesickness that any kid in boarding school has felt in being far from home. For years, every month, every week, every day, home was always there. Take it away, and the yearning for it grows to a crescendo: I need it now! I really do. Don’t you?

Care to make your own Marmite?

I haven’t done so, and don’t plan to do so, but I found you some recipes. Sainsbury’s Magazine (UK) published a recipe for it made with 1 kg sourdough bread, 7 g fresh yeast and 10 g of any sugar, which takes 12 hours to cook followed by 2 days of fermentation.

TGIFood reader Beatrice Rabkin, a nutritional therapist, shared her recipe for what she calls Super-Charged Vegetable Broth, a version of Marmite.

1 large onion, chopped (include the outer skin if organic)

2 large carrots, sliced (include carrot tops and skin if organic)

Her method: Rinse all the vegetables well, including the seaweed. In a large stock pot, combine all the vegetables and spices except the salt. Fill the pot to 5 cm below the rim. Cover, and bring to the boil. Once it is boiling, remove the lid and decrease the heat to low. Simmer uncovered for at least 2 hours. As the broth simmers some of the water will evaporate, add more if some of the vegetables start to peek out. Simmer until the full richness of the vegetables can be tasted. Strain out the vegetables through a large coarse-mesh sieve (remember to put a heat resistant container underneath), then add the salt. Let cool to room temperature before refrigerating or freezing (up to 3 months). DM/TGIFood