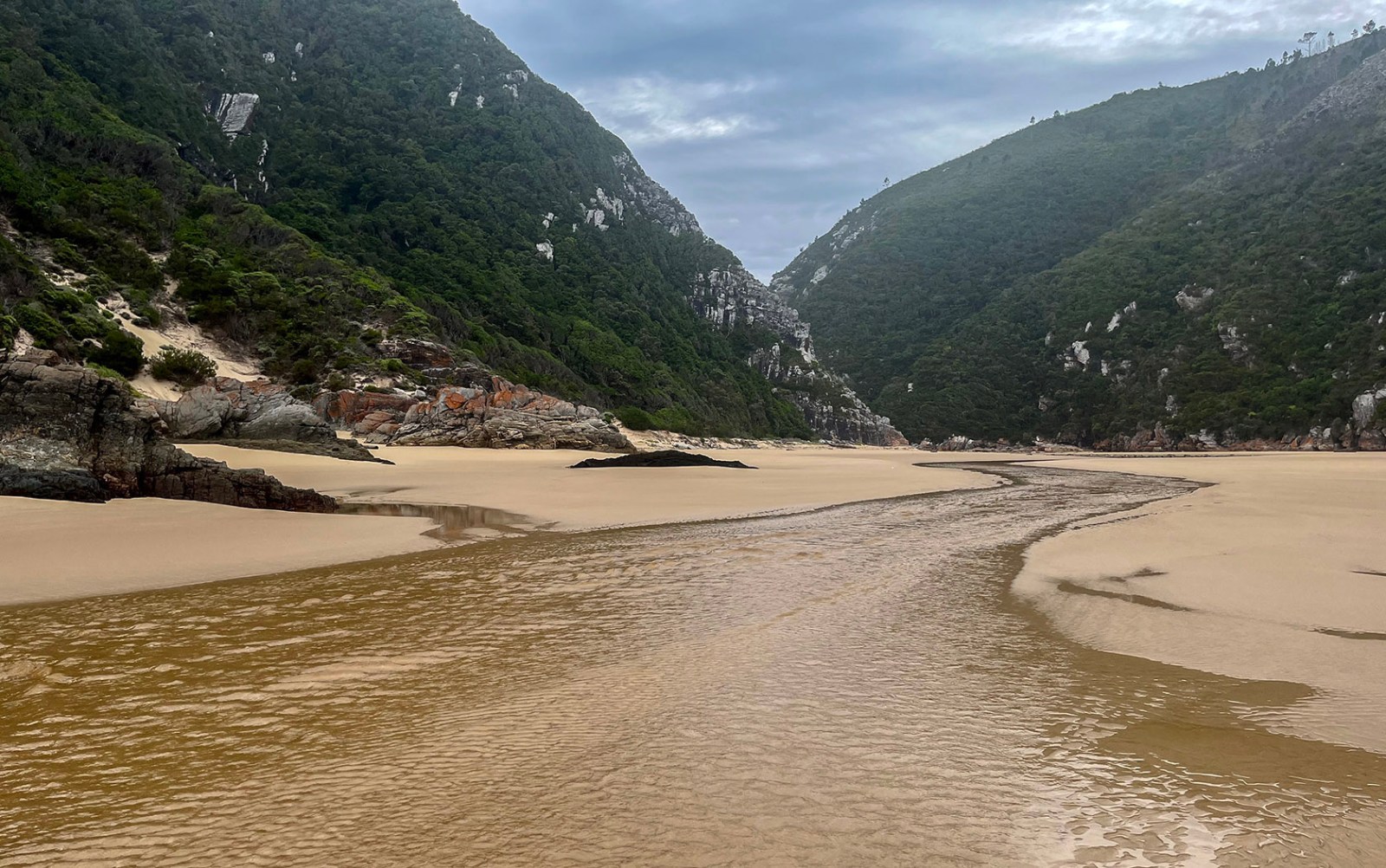 The mouth of the Bloukrans River encountered on day 4: hikers are advised to cross at within half an hour of low tide, or take their chances! (Photo: Mark Heywood)

Having now walked the Otter Trail, I can confirm that it is as beautiful as any hike you will encounter, anywhere. As you go under the wooden arch that marks its start at the Storms River mouth in the Eastern Cape, it’s like jumping on to a chute that enters into another physical world, an encounter with unspoilt nature.

For centuries poets and painters have tried to capture the essence of natural beauty. But the truth is, its diversity, fecundity and complexity make measures and comparators impossible. I’m not aware of a Natural Beauty Index that can rank a hike in the way that, for example, we rank countries on the Human Development Index.

Ugliness is discernible, but natural beauty is as much subjective; it’s what you and you alone see or feel or hear or smell, and how your soul receives it, as it is the objectively verifiable object of your attention.

These thoughts came to mind as I reflected on the mystique around the Otter Trail, a hike that sits at the apex of hikers’ dreams, reputed to be the most beautiful 45km hike in South Africa.

But despite the mythology of the Otter many potential hikers are deterred, not by its length or sometimes difficult terrain, but by the knowledge that such is its reputation, the waiting list for bookings is said to be up to a year. Ironically, because there’s a waiting list people choose to wait and the dream gets postponed to some maybe day. Postpone it for another year. And then another, and then another…

Don’t. Book now and time will bring it to you.

When it does you will not be disappointed.

Having now walked the Otter Trail I can confirm that it is as beautiful as any hike you will encounter, anywhere.

As you go under the wooden arch that marks its start, it’s like jumping onto a chute that enters into another physical world, an encounter with unspoilt nature; the world as it was for centuries before capitalism extended its tentacles to every corner of the world, fed by our appetite for things we can own and consume; ravaging the land, sea, air and all the populations that stood in its way, human and animal.

But before I walk you any further a few facts to help you on your journey.

The Otter Trail is a four-night, five-day hike between the Storms River mouth and Nature’s Valley in the Eastern Cape. On each of the four nights you stay over at the most perfectly located and well-maintained huts, spartan but serviced with wood and clean water. No other mod cons. The two huts sleep only 12 and that’s the number allowed to walk the Otter on any given day.

It is South Africa’s oldest hike and has been walked every day since 1968, with the exception of five months in 2020 when South Africa locked down for Covid-19. It’s physically demanding walking and there’s an age limit for the over-65s.

Official guides say the walk includes more than 7,000 ascending steps, and although this is not a mountain, you ascend more than 2,600m (more than twice the height of Table Mountain!)

I would love to know the histories of the people who dreamed and cut this trail. We take them for granted. But today, the trail is managed and extremely well maintained by the rangers and staff of SANParks. Were there will and vision, it is a model for what could be a much larger ecotourism industry in a country whose diverse natural beauty is unparalleled and in many places untapped. It could be a much bigger employer, integrated with rural communities, weaving in oral history and culture, fostering domestic tourism and taking advantage of the massive growth of interest and participation in outdoor activities that followed the months we were locked in our homes because of Covid.

All that it requires is imagination and commitment.

But enough of that. Over the five days you walk the Otter Trail you will:

Quickly, instead of days and time being measured by deadlines and diary schedules, the tides and weather patterns will take over. After your self breaks itself away from the self-induced rush that carries most of our days away in a blur of meetings, it’s amazing how much space time allows us in a day and how you can wallow in it.

The walk is unspoilt.

Unlike other parts of the coast, drift plastic seems less ubiquitous. Perhaps that is because the hike falls within the 60km Tsitsikamma Marine Protected Area. Although drought and climate change have surely taken their toll, to the untrained eye the beauty seems to be as it ever was; although I must admit that the lush indigenous forests seemed quiet for such a profusion of flora, the birds that sing do so in solo, drawing the reply of an invisible mate.

On the last day of walking, sated but still hungry, I wondered how to capture this timeless experience. We have so much beauty. We have poets like Sipho Banda who writes of the mountains of the Southern Drakensberg. But who and where are the William Wordsworths and Samuel Taylor Coleridges of the Wild Coast or the Tsitsikamma, poets who in their writings about the English Lake District sketched a local ecosystem that endures in their poetry centuries later, while at the same time reflecting the rumbling politics of their world. A very different age admittedly.

As I walked through the last indigenous forest and under the finishing arch, pondering re-entry to our cruel world, the last thought I had was that the Otter Trail will be here long after humans have self-destructed; the snaking path where humans once walked to get away from themselves will slowly and surely be reclaimed by nature. In decades ahead walkers may have to face challenges larger than Covid, but this trail will still be there for those seeking solace and clues to the meaning of life. DM/MC/ML

In response to the article Eugene Moll, a reader writes: The architect of the Otter Trail was Robbie (Turkey) Robinson – when he was the scientific officer station at Tsitsikama National Park (NP). He did his PhD through a university in the USA on the inshore marine life there. That was before he was appointed CEO of SANParks which he eventually “left” as, even as an Afrikaner, was considered too “verlig” (liberal).

First was the Otter Trail, next the Richtersveld NP that is the first and only park where the local community also have a role to play in management (a “contractual” Park), then the West Coast Park and Table Mountain NP.

Turkey wrote four short books that were to be given, one to each grandchild after he died. He just wanted his grandchildren to know a little of their grandfather. These four books should be “discovered” and published – if his family would agree. For the history of SA I think they are part of our national treasure.  He was a quiet and unassuming person but someone who did a great deal for conservation in SA.