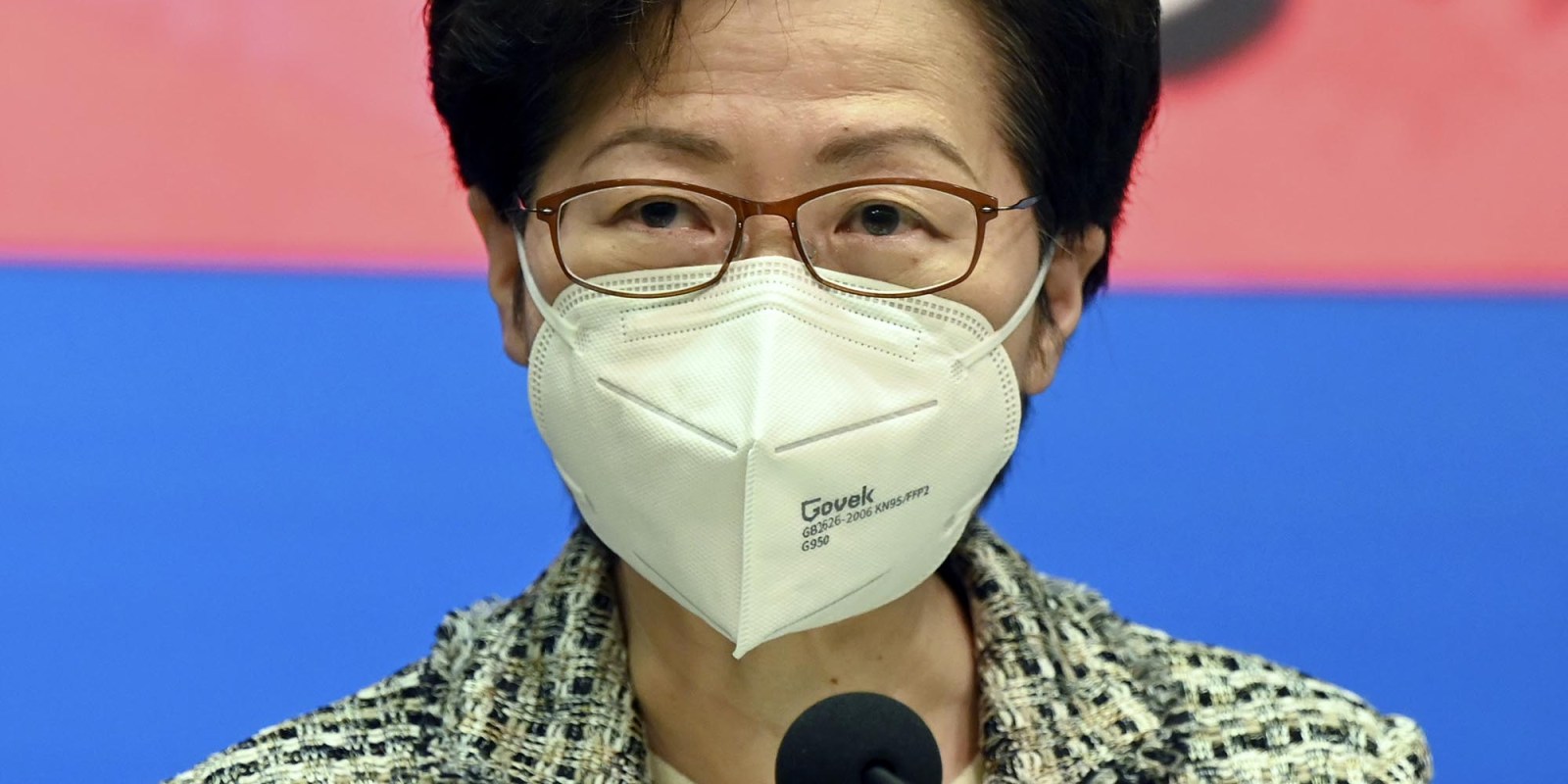 Hong Kong Chief Executive Carrie Lam appeared to acknowledge frustration with the city’s strict Covid policies, which have kept the financial hub largely isolated from the rest of the world, asking for a few more days before she unveils what could be sweeping changes to the city’s approach next week.

China’s Covid outbreak looks to be slowing, while some factories that had been previously shut down are doing a targeted reopening in Shenzhen. Infections in Jilin, the latest epicentre, dropped after the province was locked down on Monday.

South Korea recorded a record increase in daily infections and deaths as the nation’s Omicron outbreak worsened. The nation reported 621,328 infections and 429 deaths on Thursday. 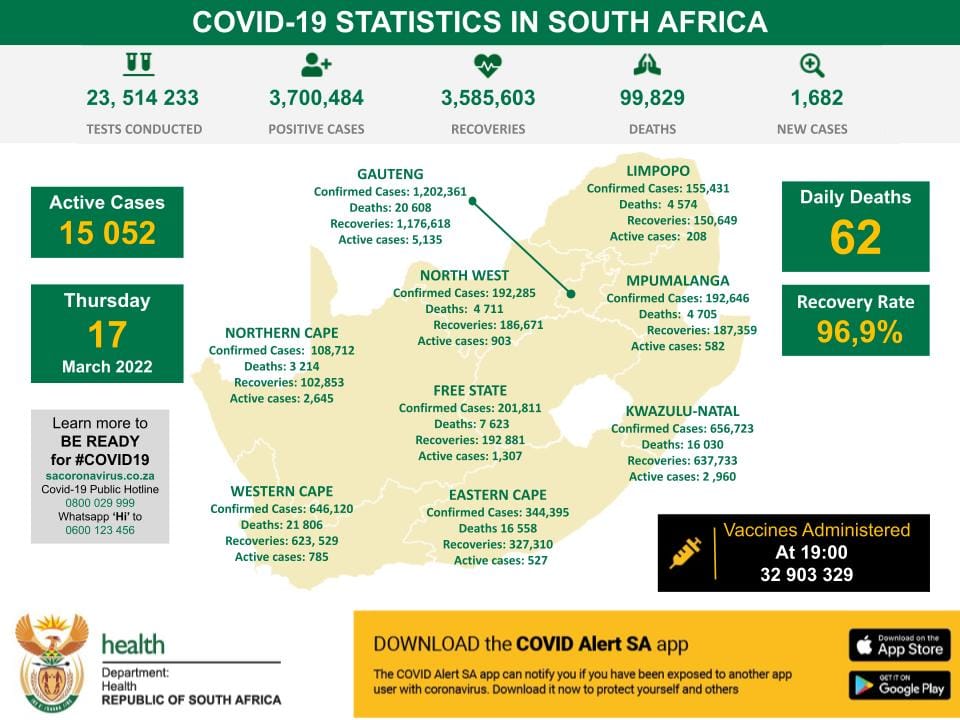 Hong Kong reported 21,650 new infections and 289 deaths, including a backlog of 87, on Thursday. While the number is a decline from the 30,000 or more additional cases posted daily earlier in the month, it’s too soon to say that it’s a trend, said Chuang Shuk Kwan, the head of the Center for Health Protection’s Communicable Disease Branch.

Germany registered almost 300,000 new Covid-19 cases, propelling the infection rate to a new high for the sixth straight day, raising alarms ahead of plans to lift almost all remaining curbs this weekend.

Chancellor Olaf Scholz was due to hold talks with regional leaders on pandemic strategy later on Thursday. While there is little appetite to reimpose nationwide restrictions as long as hospitalisation rates remain in check, some of the 16 state premiers are unhappy with the rapid pace of unwinding.

Medicago’s Covid-19 vaccine is poised to become the first Western shot to be rejected by the World Health Organization (WHO), because of the company’s links to cigarette maker Philip Morris International.

The Canadian biopharma company’s request for pre-qualification of its Covifenz shot was not accepted, according to the WHO’s guidance document dated March 2. That means the WHO is unlikely to approve the vaccine for emergency use, which would also keep it out of the Covax global vaccine-sharing facility.

Shenzhen allows some factories to reopen

Just days into a Covid-19 lockdown that bars residents of Shenzhen from leaving their homes, China is allowing some companies to restart factories in the tech hub in a move that may provide a blueprint for shielding the economy and supply chains from the country’s virus fight.

iPhone maker Foxconn Technology Group is the most prominent, allowed to partially resume its operations in Shenzhen on Wednesday by deploying a so-called closed-loop system. Zhen Ding Technology Holding, a Taiwanese maker of printed circuit boards, is also operating a closed loop at its plant, along with a medical device company manufacturing essential goods that didn’t want to be named.

The city of 17.5 million people was on Sunday placed in a weeklong lockdown.

Rising frustration from the public and financial institutions is pushing a review of pandemic control measures in Hong Kong, where a suite of stark containment measures have been in place since January to fight the city’s worst-ever Covid outbreak.

Chief Executive Carrie Lam pointed to the strain on residents and damage to the reputation of the once vibrant Asian financial hub for the revision, asking for a few more days before she unveils what could be sweeping changes to the city’s approach next week.

“I have a very strong feeling that people’s tolerance is fading,” Lam told reporters at a briefing on Thursday. “I have a very good feeling that some of our financial institutions are losing patience about this isolated status of Hong Kong,” she said. “Nobody attaches as much importance as myself to Hong Kong’s international status.”

Lam signalled a possible reduction in the amount of time new arrivals from abroad must spend in hotel quarantine and said virtually every area of her government’s approach is being scrutinised.

The Press Association reported Martin’s positive test on Wednesday. Martin left the Ireland Funds Gala in downtown Washington after learning of the result, according to CBS News.

President Joe Biden spoke at the event but he was not in close contact with Martin, according to White House spokesman Kevin Munoz.

China’s Covid outbreak appears to be slowing after it reported the lowest number of cases so far this week. A total of 2,432 infections were reported on Thursday, according to the National Health Commission. The epicentre of the outbreak, the northeastern province of Jilin, found around 1,100 cases, down from recent highs after authorities locked down the region of about 24 million people on Monday. Tech hub Shenzhen reported 91 cases.

The financial hub of Shanghai found 158 new infections, of which 150 were not showing symptoms. The city has started mass testing the population on a staggered basis by locking down some residential compounds and regions as authorities seek to stymie Omicron’s community spread. Beijing halted some inbound and outbound trains at two stations after finding four new infections on Thursday.

South Korea’s daily new Covid-19 infections reached a record 621,328, while the number of deaths rose to a record 429, according to the Korea Disease Control and Prevention Agency.

But while cases are surging, the country has one of the lowest virus death rates globally.

The sky-high caseload reflects the nation’s consistent deployment of mass testing, largely abandoned by many places as Covid becomes endemic but a key reason behind Korea’s sliding death rate, according to its virus fighters. Continuing to officially diagnose most infections allows Korea to identify at-risk cases and preemptively treat or hospitalise those patients before their conditions become severe.

Combined with an 88% vaccination rate – and one of the highest booster shot take-ups in the world, especially among the elderly – it’s delivered a fatality rate of 0.14%. That’s one-tenth of the rates in the US and the UK and down from 0.88% two months ago, even as cases have surged 80-fold in the same time frame.

Researchers estimated the Sinovac shot has effectiveness rates of 38% against Covid-19, 65% against hospitalisation, and 69% against an infection severe enough to require admission to an intensive care unit. The study took place during the Omicron outbreak in Chile between December and February and was conducted by researchers, mostly working for local universities as well as the country’s health ministry.

The results, which were uploaded as a preprint on Research Square, haven’t undergone peer review, yet offer insights into how the vaccine fares against the more-transmissible variant. It also sheds some light on the efficacy of Covid-19 vaccines in children, as the spread of Omicron led to more paediatric hospital admissions. DM/MC