Ex-ANC councillor in Mpumalanga wins back his seat, but for a rival party 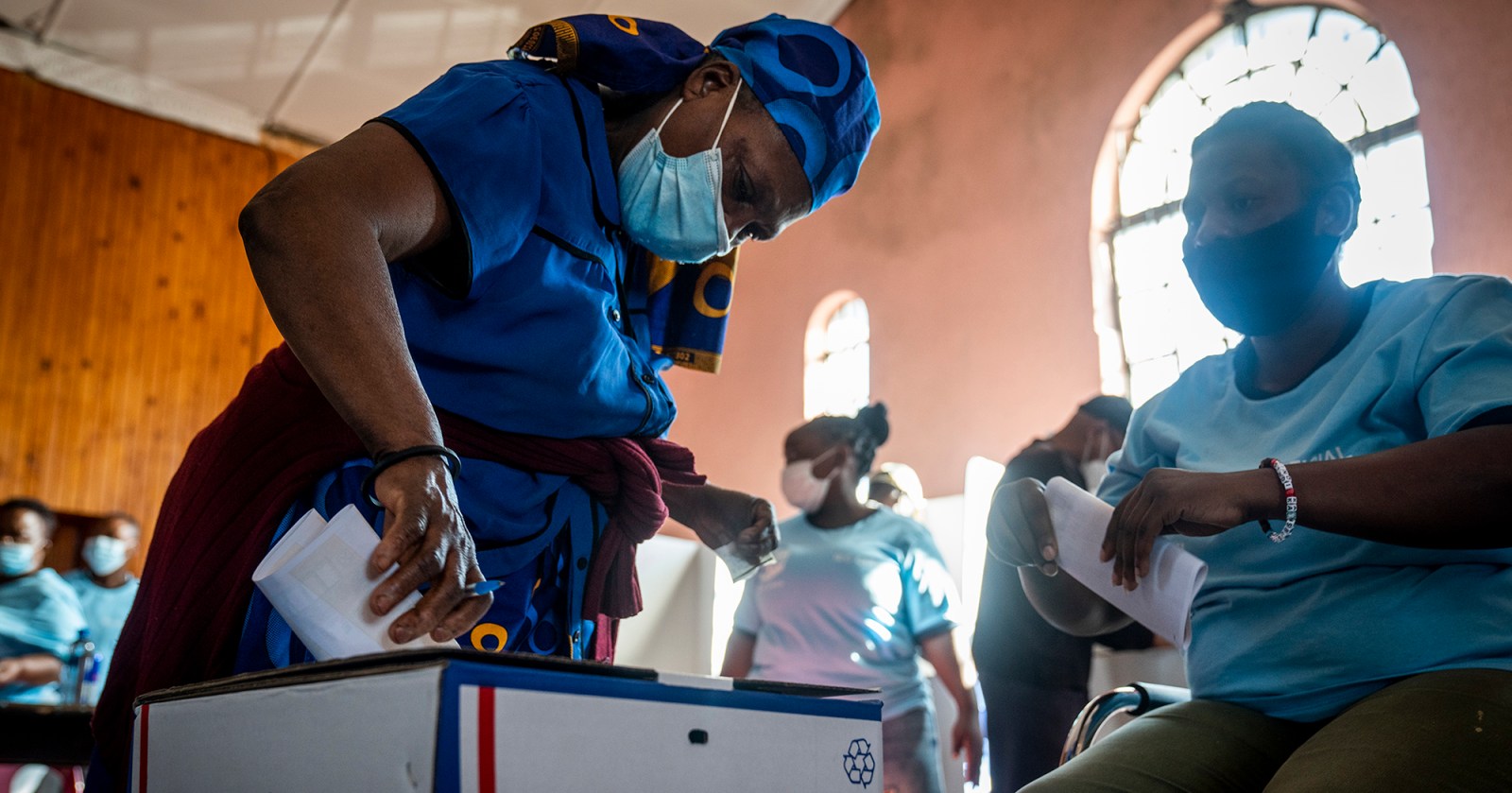 Illustrative image: A woman casts her vote at a voting station in Johannesburg as South Africans head to the polls for local government elections. (Photo: Shiraaz Mohamed)

Veteran ANC councillor in Thaba Chweu (Sabie) Paul Mokgosinyane won his own seat back from the ANC for the African Unified Movement (AUM) in a by-election shock in Mpumalanga. This result was an outlier as the ANC had dominant wins in the rural Eastern Cape and fended off a spirited challenge in another Mpumalanga by-election.

Ward 6 mainly comprises the Simile township next to the forestry town of Sabie on the R532 Panorama Route. Sabie is close to towns like Graskop. The ANC won here by a big margin in 2021, but Thaba Chweu was the municipality where the ANC struggled the most in the Ehlanzeni District, winning 60% of the vote. While 60% is still an impressive number it is well below the ANC’s district average of 69%. Ehlanzeni includes Mbombela and Bushbuckridge. The seat of Thaba Chweu is Mashishing, formerly Lydenburg.

Paul Mokgosinyane won the ward for the ANC in the local government elections and served as a councillor and community leader in the Simile township for the party for a number of years. In this by-election,  he switched sides and stood for the African Unified Movement (AUM), a local party that was active in Thaba Chweu and Bushbuckridge and had one seat on the Thaba Chweu council. Mokgosinyane beat the ANC by 188 votes as he carried two of the three voting districts in the ward. These two districts are centred on Simile. The smallest voting district which was won by the ANC was more rural.

The new council composition is ANC 15 (16) DA 6 EFF 3 AUM 2 (1) VF+ 1-Total 27. It remains to be seen whether the AUM’s win is owing to Mokgosinyane’s popularity in Simile or whether it will be emerge as a real political alternative in Thaba Chweu.

Amersfoort is a farming town off the N11 national road between Volksrust and Ermelo. It is north of Volksrust, the principal town in the municipality. Dr Pixley ka Isaka Seme has the second-lowest number of voters in the Gert Sibande district. The ANC had its third-best result here, winning 62% of the vote. This was higher than the district average of 58%.

The ANC did not give an inch in this by-election as it matched its November percentage share of the vote. The African People’s Movement (APEMO) surged to a strong second place. This party has firm roots in the Okhahlamba (Bergville) municipality in KwaZulu-Natal. It is a breakaway from the National Freedom Party (NFP). APEMO was a big beneficiary of Forum 4 Service Delivery (F4SD) voters in this by-election. The F4SD came second here in 2021 with 14% of the vote. It was not on the ballot for this by-election. APEMO has one seat on the council. It will want to use that base and this strong showing to establish a firm foothold in the municipality. The EFF will be disappointed with its third-place finish.

The Chris Hani region is centred on Komani (formerly Queenstown) and includes the relatively competitive municipality of Inxuba Yethemba (Cradock). The ANC won more than 70% of the vote here in 2021. In the two by-elections in the district, the ANC’s vote share was considerably higher than the 70% district average. It performed the best in Engcobo, amassing 81%, and in Intsika Yethu it was third-best on 79%. The more rural the municipality, the better the ANC tends to do.

Ward 5 is centred on the small town of Qamata which sits on the R61 provincial road that links Komani with Tsomo. It is west of Cofimvaba, the seat of power in Intsika Yethu.

The ANC won by a landslide here in 2021, but would have been concerned about the relatively low voter turnout. If the ANC wants to match its 2019 election performance it will rely on strongholds like Intsika Yethu to come out and vote and carry on voting for the ANC. The DA was not on the ballot for this by-election, despite a second-place finish here in 2021 with 11% of the vote.

The ANC was utterly dominant this time. Its voting district support ranged from 84% to 97%. It will be delighted with obtaining more than 90% of the vote, while its challengers barely moved the needle. The ANC is the only electoral game in town in Qamata.

Ward 1 is a rural ward centred on the village of Ngqutura which is next to the Xuka river. Ward 1 is north of Ngcobo, the seat of power in Engcobo, just off the gravel road linking Ngcobo and Cala.

In an election where the ANC fell under 50% nationally for the first time, it is clear that its performance in Ngqutura would have given the party a lot of hope and motivation. It will have wanted to get north of 90% in this by-election and let the EFF and the UDM fight over the scraps for second place. The ANC finished with a 95% percentage total. This included 100% of the vote in three of the seven voting districts. These were not isolated, tiny districts where the only registered voters are the one family on the hill. The ANC received 188/188 valid votes, 304/304 valid votes and 174/174 valid votes in these respective districts.

The next round of by-elections will be on 20 April 2022 when every seat being contested is relatively competitive. It also includes the first by-elections in the Northern Cape and the Western Cape since the local government elections. DM