Daily Maverick asked readers to react to the extension of the National State of Disaster for another month, until 15 April. The answers were loud and clear.

Out of 204 responses from readers, only three told Daily Maverick they thought the government’s decision to extend the National State of Disaster was warranted.

The level of frustration after two years of lockdown was evident in the responses, with many using emotive language such as “frustrated”, “deeply disappointed” and “angered”. Of the three who supported the extension, one said it was important to remain cautious in response to Covid-19.

Read in Daily Maverick: We’ve got the power: Government hangs on State of Disaster to keep control and The National State of Disast…rous trust in the government

Under current Adjusted Alert Level 1 regulations, international travellers inbound to South Africa are required to produce a negative PCR test that is not older than 72 hours. 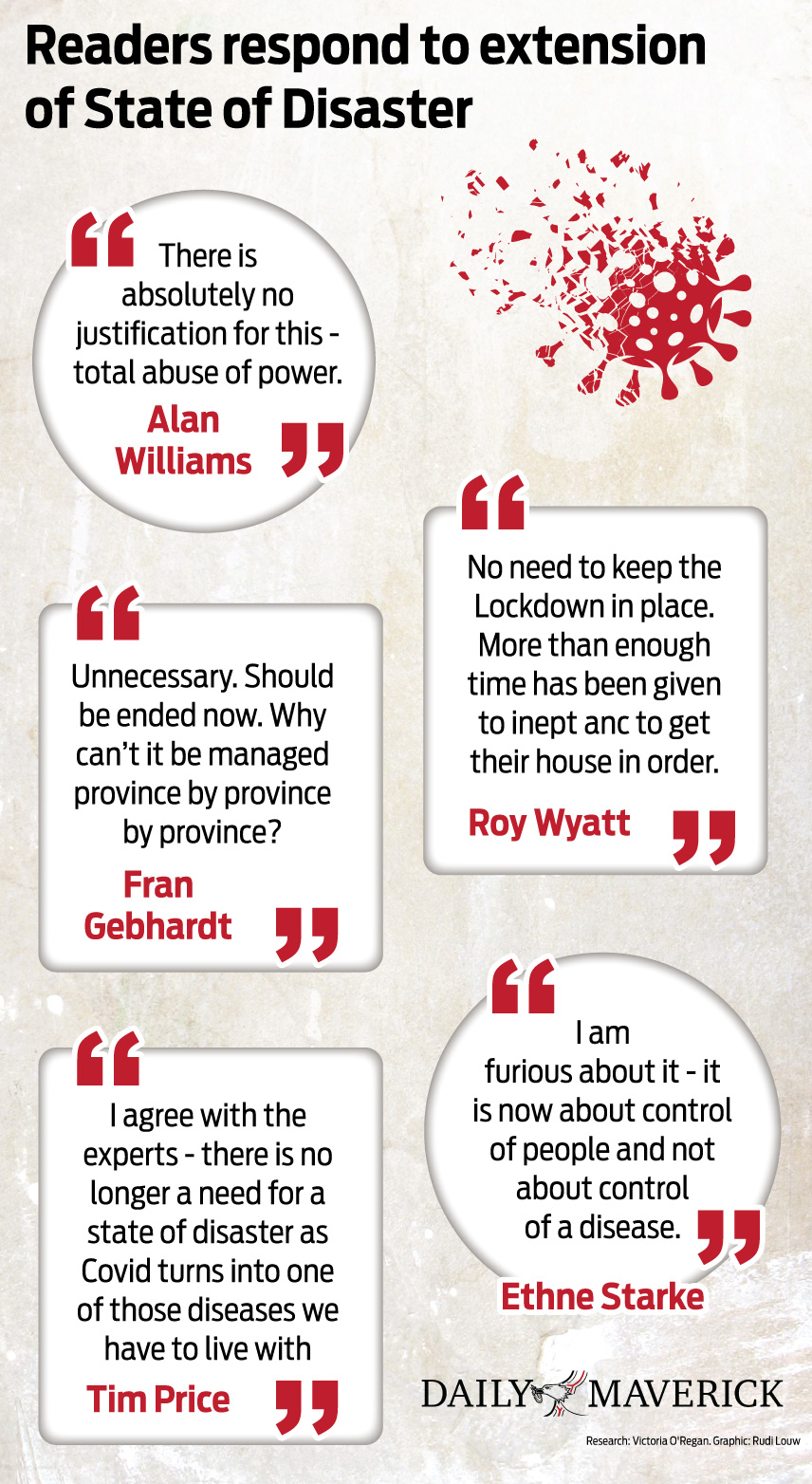 Reader Nick Randall, an architect for a company that specialises in hotel and lodge designs across India and Africa, and who frequently travels to remote locations, replied that the PCR test requirement for travellers “costs time and money”.

“I often have to travel to remote, international sites for the hospitality industry. Having to constantly get PCR tests costs time and money!

“Due to the time it takes to get to and from our site, the time available to us to actually carry out our work is limited. Since Covid struck, we now have to head back to Ahmedabad [in India] a full day earlier, just to get a PCR test done that’s required to be negative on landing – rather than at the time of boarding. The same goes for many of our projects, from Rwanda, to Zambia, to Benin. This adds time to our trips, while also reducing the time we might have on-site,” said Randall.

Tourism bodies including the Southern Africa Tourism Services Association (Satsa) and the Tourism Business Council of South Africa (TBCSA) have, for months, been calling for the government to urgently lift the PCR requirement for fully vaccinated travellers.

Slamming the government for “dithering” over the removal of the PCR test requirement, Satsa CEO David Frost has said that the test “remains one of the last impediments to travel to South Africa, based on cost, inconvenience and perceptions of uncertainty around travel postponement and cancellation, should just one member of a travel group test positive”.

Another reader, Jacques du Plessis, echoed Randall’s remarks, saying: “Our country is heavily dependent on tourism and keeping the [National State of Disaster regulations] in place clearly sends a message to visitors to rather stay away.

“Failure to open the economy is simply criminal.”

On Thursday, the DA announced that it would be heading to court to stop the government from “glibly” extending the National State of Disaster again.

“We will not allow our democracy to be suspended indefinitely in favour of rule by decree, with no democratic checks and balances… But it’s not enough just to end the State of Disaster. The lockdown itself must end. It can’t just become permanent legislation, as the government is trying to do.

“When the government moves lockdown regulations into permanent legislation instead, the DA will mount a legal challenge to those too,” said DA leader John Steenhuisen. DM