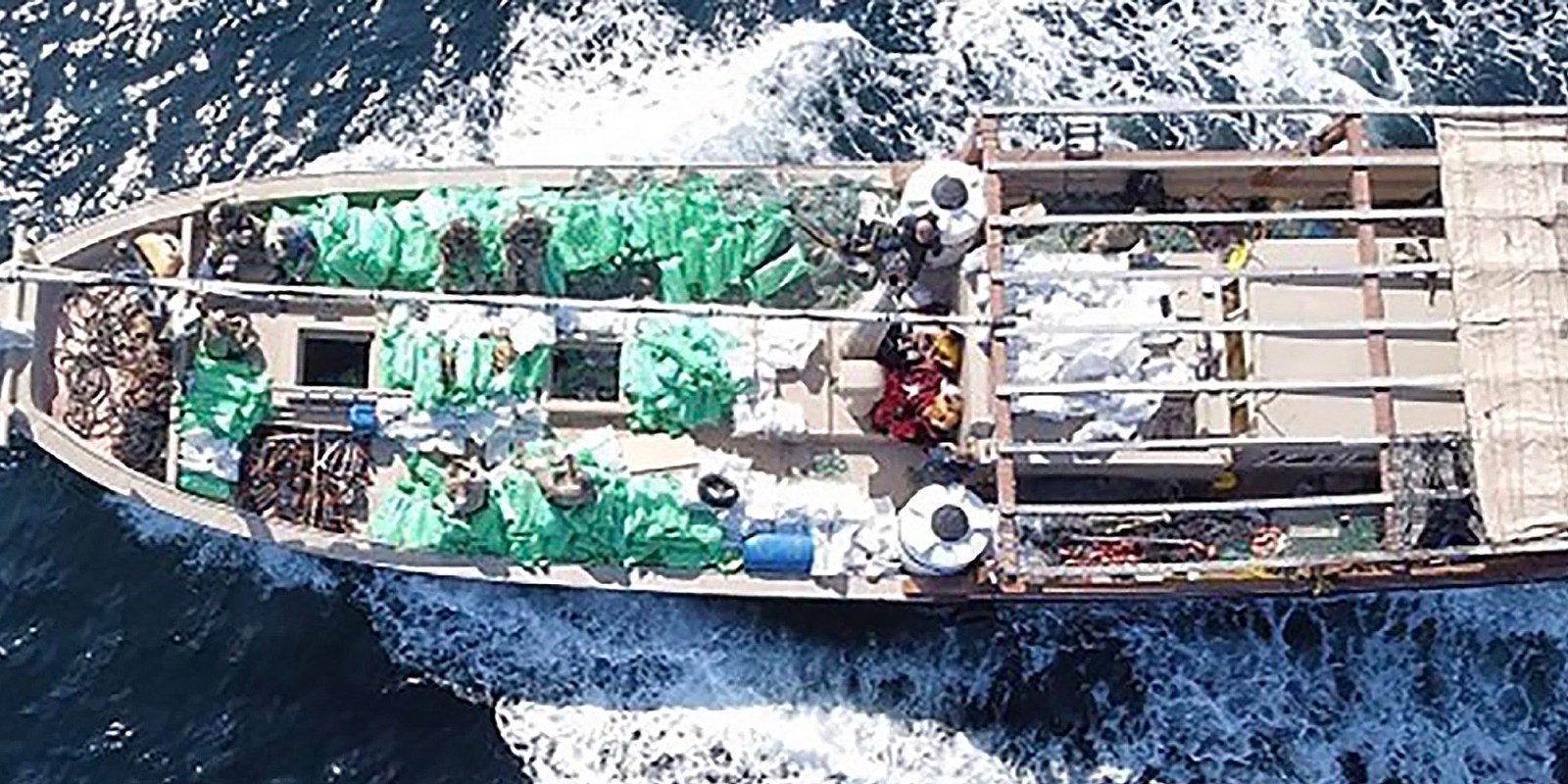 A dhow found to be carrying 1,400 assault rifles, believed to be traveling from Iran to supply Houthi rebels in Yemen in December 2021. The green packaging seen on the deck of the ship is consistent with previous seizures of this kind. (Photo: Twitter / US Navy)

In December 2021, US naval forces intercepted a dhow crossing the northern Arabian Sea. It was carrying 1,400 assault rifles and more than 200,000 rounds of ammunition. Analysis suggests they are probably Iranian state supplies to Houthi allies in Yemen.

On 20 December 2021, US naval forces intercepted a stateless fishing dhow in the northern Arabian Sea. In what was described as a “flag-verification boarding”, intended to establish the origins of the vessel, a cargo of 1,400 assault rifles and more than 200,000 rounds of ammunition were discovered.

The US Navy reported that the weapons are likely to have originated in Iran, as this maritime route has historically been used to traffic weapons to Houthi rebels in Yemen, in violation of both UN Security Council resolutions and US sanctions.

This is the 13th such interdiction by international naval forces since September 2015 of weapons shipments believed to have been destined for Houthi insurgents in Yemen. In two prior incidents, maritime interdictions of arms-smuggling dhows were carried out by the USS Winston Churchill (11-12 February 2021) and the USS Monterey (6-7 May 2021), off the coast of Somalia and in the Arabian Sea, respectively.

Preliminary images of the December 2021 seizure released by the US Navy indicate that it matches the pattern of earlier maritime interdictions. In particular, the guns on board seem to be Type 56-1 assault rifles — Chinese-manufactured AK-type rifles characterised by their under-folding metal stocks. The two previous interdictions in 2021 also resulted in the seizure of several thousand of these Type 56-1 rifles, as well as a range of heavier weapons.

The green packaging in which the weapons were stored aboard the dhow is also similar to the packaging used to encase the Type 56-1 rifles seized in separate incidents in 2018 and 2021. It is unusual, however, that the most recent seizure also contained ammunition as well as rifles, something that has rarely been seen in earlier interdictions.

Analysis of earlier arms shipments that appear similar to the December 2021 seizure suggests they are likely to be Iranian state supplies being provided to Houthi allies in Yemen. Previous analysis from the Global Initiative Against Transnational Organized Crime (GI-TOC) has found that these Type 56-1 rifles have later been documented in illicit markets across Somalia.

The evidence for Iranian state-supplied arms

The civil war in Yemen — which first erupted in late 2014 when Houthi insurgents captured large parts of the country — has become a key battleground for proxy conflict between Iran and Saudi Arabia. The Saudi-backed coalition of forces fight in support of the internationally recognised government of Yemen, while evidence suggests that the Houthis have received support from Iran.

A portion of this Iranian support has consisted of deliveries of small arms and light weapons to Yemen, carried out by sophisticated transnational maritime trafficking networks. Frequent meetings and trans-shipments between dhows of Iranian, Yemeni and Somali origin disguise the provenance of weapons shipments and evade detection.

Three pieces of evidence point to the intercepted weapons coming from Iranian state supplies. First, analysis of the serial numbers of the Type 56-1 rifles seized in February and May 2021 shows that the numbers run almost consecutively, which suggests that they could have formed part of a state-to-state transfer from China (where these weapons are manufactured) to Iran.

Although Iran was under a UN arms embargo until October 2020, restrictions on exports to the country did not extend to small arms and light weapons. Therefore, no legal barriers existed to prevent China from supplying Type 56-1 rifles to Iran.

While state-to-state weapons transfers would be expected to contain newly manufactured weapons with a continuous run of serial numbers, stock assembled from black market trading would probably have a wider range or more random distribution of numbers.

Second, most of the seizures since late 2015 have also contained weapons manufactured in Iran itself.

Third, GPS information from several seized arms trafficking dhows suggests that the vessels had travelled from Iran in the days before their interception. For instance, a GPS device onboard one of two dhows intercepted by US forces in February 2021 contained coordinates from late January 2021 that corresponded to a small anchorage lying roughly 10km east of Jask, a strategically important port near the Strait of Hormuz that is host to an Iranian naval base.

The Wall Street Journal reported in January 2022 that a draft report prepared by the UN Security Council’s Panel of Experts on Yemen identified Jask as the origin point for multiple weapons shipments to Yemen, citing interviews with the Yemeni crew members and data from navigational devices onboard the dhows.

Between December 2020 and August 2021, GI-TOC field researchers documented a total of 417 small arms and light weapons in Somalia by surveying 13 different locations. Some 38 of these (9.1% of the total) were Type 56-1 rifles and were found in eight of the locations.

The serial numbers of the Type 56-1 rifles found in Somalia clustered around those documented in various maritime seizures, suggesting a common source. As noted above, corroborating evidence strongly indicates that common source to be Iranian state arsenals.

It remains difficult to know exactly when and how the rifles reached Somalia. It is open to speculation whether they were trans-shipped from Iranian consignments en route to Yemen or diverted into the illicit arms market only after reaching Yemen. Regardless, it is likely that some of the rifles being transported by the vessel intercepted last December may also eventually have found their way to Somalia.

Following the December 2021 interdiction, the US Navy determined that the vessel was “a hazard to navigation for commercial shipping” and sank it. The five crew members of the dhow intercepted in December 2021 all identified themselves as Yemeni nationals and were subsequently handed over to Yemeni authorities. This represents a departure from previous practice, where arms trafficking vessels and their crews have been released following the seizure of their cargoes. The weapons, meanwhile, were transferred to a US guided-missile destroyer.

There has been pressure on international forces by external observers — such as the UN Panel of Experts on Somalia — to preserve seized weapons for documentation and analysis, in cases like this one.

Evidence suggests that trafficking networks have repeatedly used the same dhows to transport multiple weapons shipments. For example, one of the two dhows intercepted in February 2021 — the Umm-al-Mada’in — was identified by a GI-TOC source familiar with maritime arms smuggling gangs in both Yemen and Somalia as the same dhow intercepted just two months later by international forces. The second dhow that was intercepted trafficking weapons in February 2021 by the USS Winston Churchill was also intercepted for a second time.

In January 2022, the US Navy intercepted this dhow carrying 40 tons of an agricultural fertiliser that is also used as an explosives precursor.

The sinking of the latest intercepted vessel perhaps indicates a shift in approach by international forces operating in the Arabian Sea and western Indian Ocean (to intercept arms and drugs shipments) towards preventing the same vessels from being used in multiple trafficking incidents.

The supply of weapons to Yemen sustains a civil war that has led to one of the world’s worst ongoing humanitarian disasters. More than 20 million people are estimated to need humanitarian assistance or protection, and UN agencies operating in Yemen warned in late December 2021 that eight million of these people will receive reduced food rations from the start of 2022 as a result of budget shortfalls.

The proliferation of arms in Somalia, diverted from Yemen, also has potentially serious security implications for the African country, as well as for neighbouring Ethiopia and Kenya.

The militant groups al-Shabaab and the Islamic State in Iraq and the Levant faction operating in Somalia’s Puntland region routinely source small arms and ammunition from Yemen. DM