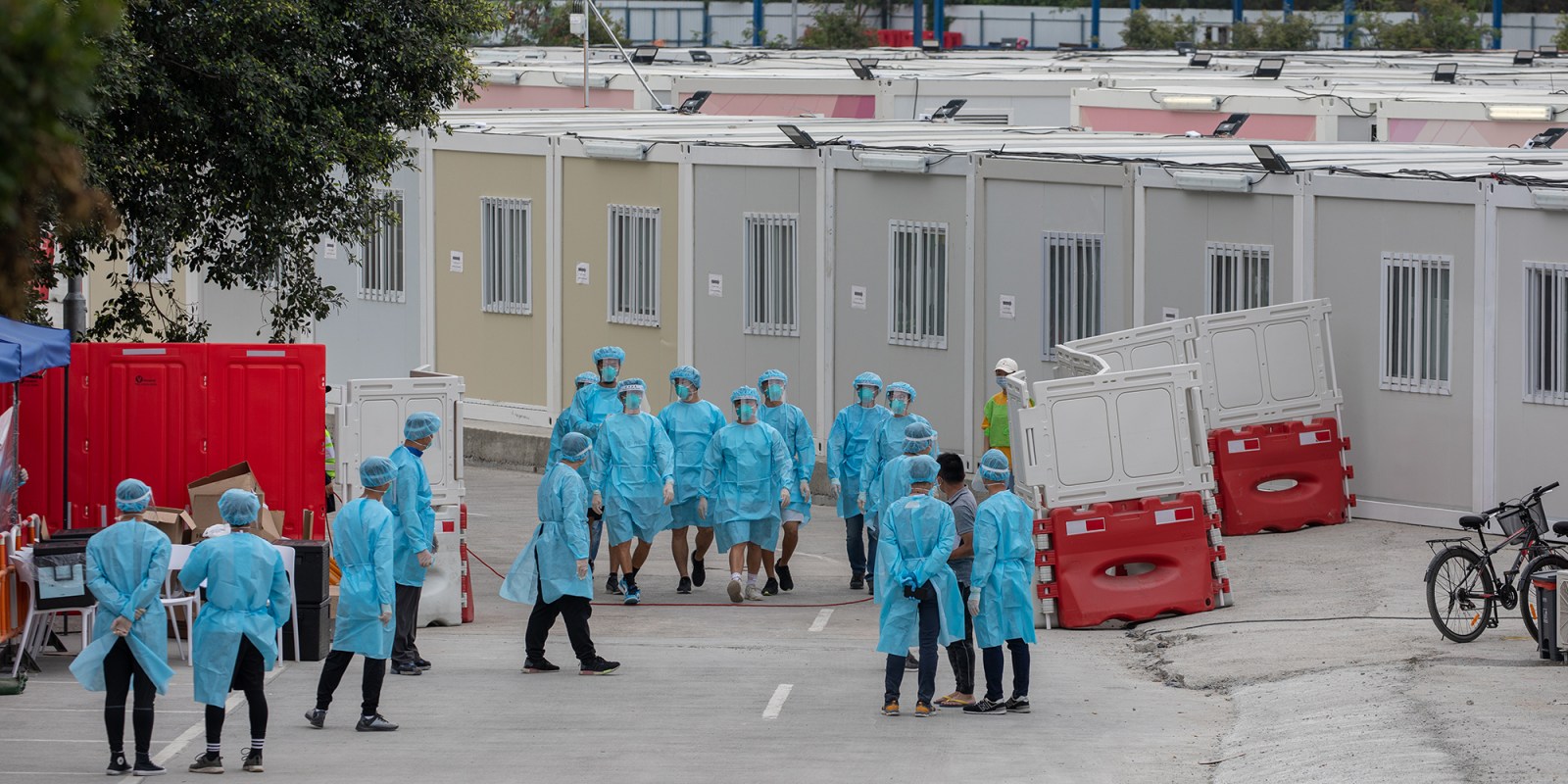 New Covid cases in China came back down to 3,054 as the mass outbreak in Jilin province eased off, a day after infections in the nation broke above 5,000 for the first time since the early days of the pandemic.

Apple supplier Foxconn Technology Group has resumed partial operations in Shenzhen, deploying a system that will allow some production to restart while the city remains locked down.

Neighbouring Hong Kong can’t commit to reopening its borders and lifting a flight ban on nine countries, its transport and housing secretary said. The number of infections in the financial hub’s current outbreak is closing in on one million, while crematoriums are near capacity. The total number of fatalities in the city since the start of the pandemic stands at 4,846 and now exceeds deaths in mainland China.

New Zealand will start letting foreigners in next month, ending the restrictions that kept Covid-19 out for much of the pandemic and joining a push around the world to allow travel to resume. 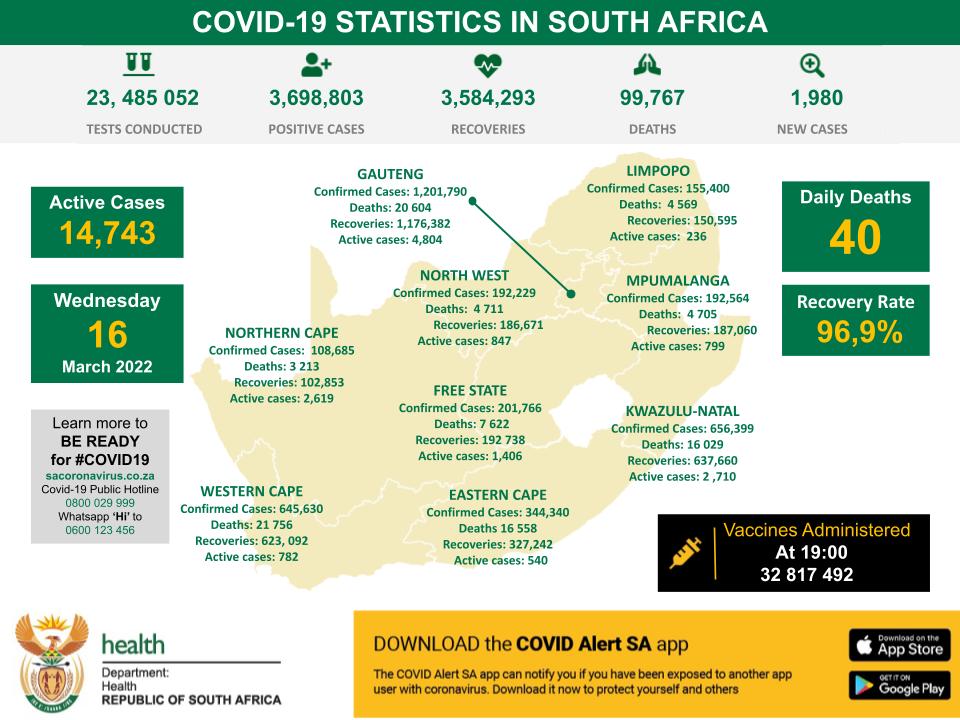 Singapore Airlines will suspend its two daily passenger flights, SQ882 and SQ894, from Singapore to Hong Kong between March 17 and March 30, according to a statement.

SQ883 and SQ895, the two daily passenger services from Hong Kong to Singapore, are not affected, the airline said.

Three of the 11 imported cases reported in Hong Kong on Wednesday were from Singapore Airlines flight SQ894, according to a health official.

Hong Kong’s crematoriums are straining under the pressure of the world’s highest Covid-19 death rate, while a lockdown in the neighbouring mainland China city of Shenzhen risks causing a shortage of coffins.

“Our crematoriums are working day and night, and they are already close to their capacity,” Chief Executive Carrie Lam said at a briefing on Wednesday. “Within such a short period of time, we have seen so many deaths, and that would affect the logistics of funeral matters.”

Thailand plans to scrap a mandatory pre-arrival Covid-free certificate for vaccinated tourists to support an economic recovery facing headwinds from the pandemic and the fallout of Russia’s invasion of Ukraine.

The nation’s main Covid task force will consider on Friday a Health Ministry proposal to waive the RT-PCR test requirement before travelling to Thailand, according to Permanent Secretary of Public Health Kiattiphum Wongrajit. The ministry is also seeking to lower the minimum medical insurance need to $10,000 from $20,000, he said.

The Health Ministry said the country will add Merck’s Molnupiravir and Pfizer’s Paxlovid to its list of drugs used to treat high-risk Covid-19 patients.

Tesla is suspending production at its Shanghai factory for two days as China tightens restrictions to contain the latest Covid outbreak, Reuters reported on Wednesday, citing a notice to staff and suppliers.

Production at the plant will be halted on Wednesday and Thursday, and no immediate reason was given for the stoppage, according to the report. Tesla didn’t immediately respond to a request for comment.

Apple supplier Foxconn Technology Group has resumed partial operations in the Chinese tech hub of Shenzhen, which remains locked down to curb a virus outbreak.

Foxconn’s two Shenzhen campuses, one of which makes iPhones, will partly resume activity, according to a statement on Wednesday. The Taiwanese company, also known as Hon Hai Precision Industry, said it won approval from authorities to restart after adopting a “closed-loop” management process across the sites, a system that seeks to insulate employees from infection.

Shanghai mandated that residents in some key areas of the city take nucleic acid tests on Wednesday and Thursday, Zhao Dandan, the vice-head of the municipal health commission, said at a briefing.

People in the areas will take two Covid tests within 48 hours, Zhao said. The key areas are set according to Covid risks, according to Zhao, without identifying them. The city added 20 local Covid cases so far on Wednesday, said Wu Jinglei, head of the local health authority.

Israeli health authorities have reported two cases of combined BA1 (Omicron) and BA2 coronavirus, a strain that hasn’t been previously reported in the world.

The cases were discovered in PCR tests performed at Israel’s main international airport for travellers entering the country. Both individuals suffered from mild symptoms of fever, headaches, and muscle aches, and didn’t require special medical treatment, according to the health ministry.

Shenzhen is encouraging financial institutions to provide loans, insurance and other financial support to individuals and companies affected by the Covid outbreak, the Chinese city’s municipal financial regulatory bureau said. The tech hub of Shenzhen was locked down on Sunday.

Hong Kong will close all government beaches starting on Thursday until further notice, according to a statement.

Chief Executive Carrie Lam said at a briefing earlier that Hong Kong will cordon off beaches as beachgoers have been seen not wearing masks. The government currently has no plans to further tighten social distancing measures.

China will isolate asymptomatic and mild Covid patients in separate facilities to free up medical resources to prioritise treatment for more severe patients at designated hospitals, a major shift in how the country deals with those infected under its Covid-zero strategy.

The change is in the country’s latest Covid treatment guideline published late on Tuesday and was made in response to feedback from local health officials that admitting all those infected by the Omicron variant, a majority of whom are asymptomatic or mild, would occupy substantial medical resources.

The guideline also included Pfizer’s Paxlovid and antibody cocktail therapy by domestic biotech Brii Biosciences as antiviral treatments for Covid. Rapid antigen testing is included too as a way to help detect cases early while rules for discharging patients from hospitals and subsequent quarantine were eased.

The coronavirus pandemic obliterated 9.3 million jobs in Southeast Asia as lockdowns hit the region’s traditional engines of growth such as hospitality and tourism, according to the Asian Development Bank (ADB).

This pushed 4.7 million people to extreme poverty last year, measured as living on less than $1.90 a day, the ADB said in a report on Wednesday. Inequality also widened as movement restrictions hit hardest the retail and informal sectors, where women, young people and unskilled workers are typically employed.

Vietnam’s health ministry waived quarantine rules for all international travellers a day after the government said it was fully reopening to foreign visitors after two years of restrictions.

All international visitors to Vietnam must undergo Covid-19 tests within the first 24 hours of arriving if they haven’t been tested within 24 to 72 hours before departure, according to a post on the health ministry’s website.

Shanghai rules out lockdown for now

Shanghai ruled out imposing a broad lockdown for now, while urging workers in its main financial and business district to work from home as officials try to rein in a swelling Covid-19 outbreak in one of China’s biggest and most important cities.

Gu Honghui, deputy secretary-general of the Shanghai government, told reporters on Tuesday that “there’s no need to lock down the city” at the moment, with authorities keen to minimise the impact of virus mitigation efforts on businesses and people’s lives.

New Covid cases in China came back down to 3,054 after rising above 5,000 the day before for the first time since the early days of the pandemic.

A reduction in infections in Jilin province, which was locked down on Monday due to an explosive outbreak by China standards, was behind the drop in the national total. Jilin cased decreased to 1,456 from more than 4,000.

No Hong Kong promises on reopening

Hong Kong can’t commit to reopening its borders and lifting a flight ban on nine countries, Secretary for Transport and Housing Frank Chan says as the city faces a widespread Covid outbreak with tens of thousands of new cases a day.

Hong Kong will only be in a position to reopen when Covid infections, serious cases and fatalities decline, Chan said in an interview with Bloomberg TV’s Stephen Engle.

New Zealand will begin reopening its border to the world next month, ending the “fortress” settings that kept Covid-19 out for much of the pandemic.

Vaccinated Australians will be allowed to enter without needing to isolate on arrival from 11.59pm on April 12, Prime Minister Jacinda Ardern said on Wednesday in Wellington. The border will open to visitors from other visa-waiver countries such as the US, the UK, Japan, Singapore and Germany from midnight on May 1, she said.

“We’re ready to welcome the world back,” Ardern told a news conference. DM/MC

– With assistance from Dong Lyu, Olivia Tam and Alisa Odenheimer.