Clashes of heritage, sustainability and survival in Zanzibar 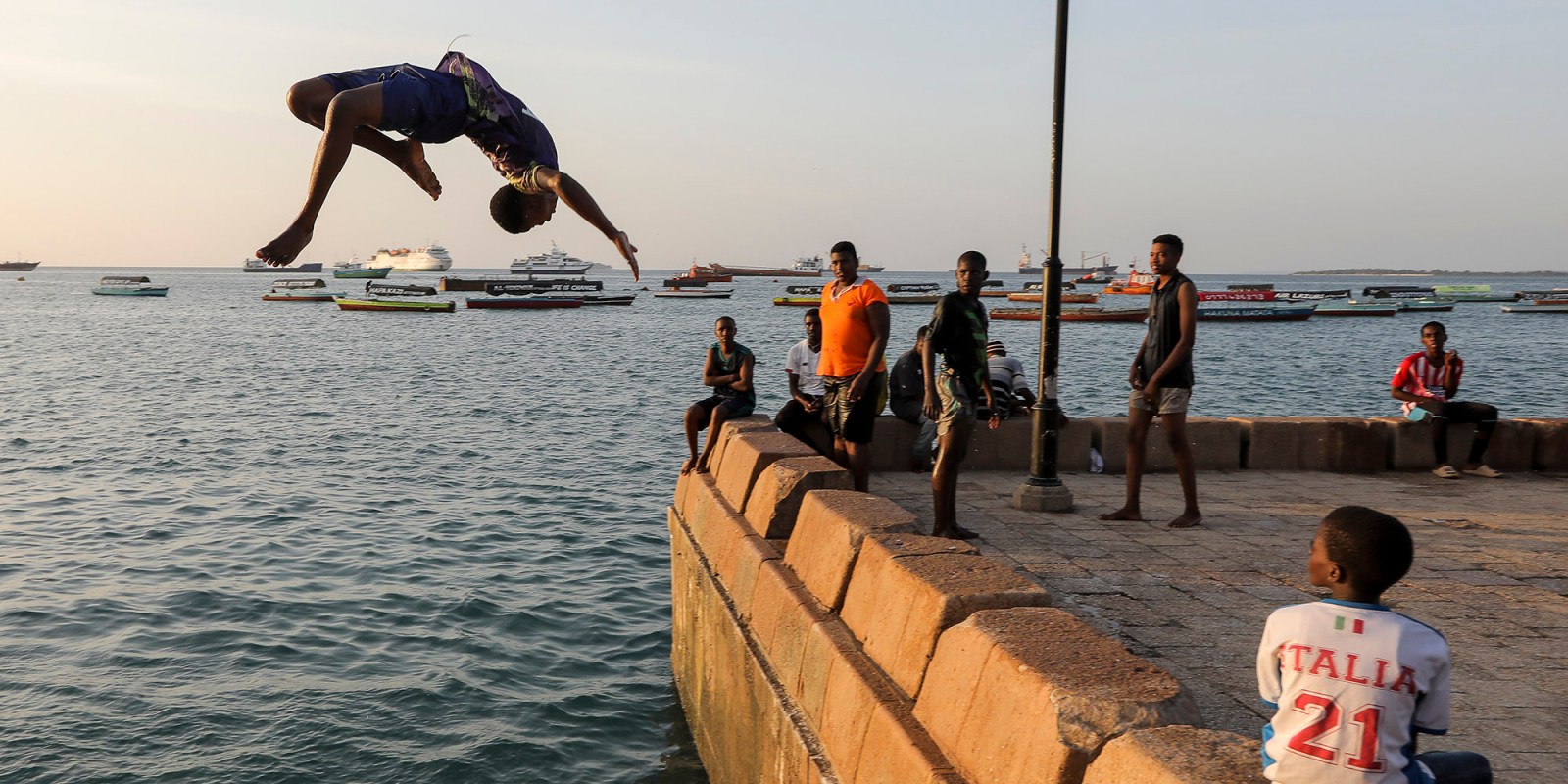 A diver does a stunt to entertain people at a popular tourist boardwalk spot in Stone Town, known for its history and an old fort, in Zanzibar, Tanzania. (Photo: EPA-EFE / Daniel Irungu)

Alexandra Willis visited Zanzibar with a Brenthurst delegation and shared some findings on the country’s development plans.

It has been almost a year to the day since the sudden death of Tanzania’s populist president John Pombe Magufuli put his then little-known vice-president, Samia Suluhu Hassan, on the map as the first woman president of the United Republic of Tanzania.

Stone Town, a Swahili coastal trading town of East Africa, is undoubtedly Zanzibar’s liveliest and most popular area destination for tourists, with a literal circle of bougie hotels within walking distance of one another.

These hotels are examples of “pockets of development”. However, outside the charmed circle one is acutely aware that the existing infrastructure needs much improvement. Infrastructural upgrades are being made slowly but surely and are a step in the right direction for the island state’s developmental path.

The government of Zanzibar is focused on its newly formed Blue Economy policy as a growth generator in light of its problems of unemployment, poverty and gender inequality. The island state’s president, Dr Hussein Ali Mwinyi, is committed to driving development in these regards, he told us in a meeting last month.

In ancient buildings dating back to the 18th and 19th centuries, stand beautiful doors with ornate carvery designs. These doors with golden handles boast 400 years of history of Swahili, Portuguese, Arab, Indian and British influence behind them.

Some of these doors have a United Nations Educational, Scientific and Cultural Organisation (UNESCO) marking on them. UNESCO, according to its mandate, “seeks to build peace through international cooperation in education, sciences and culture”.

UNESCO’s programmes contribute to the achievement of the Sustainable Development Goals defined in the 2030 Agenda adopted by the UN General Assembly in 2015. To be associated with UNESCO is a great honour for a developing country.

Zanzibar’s Stone Town is listed on UNESCO’s World Heritage list and in 1998 the town received $15,000 in assistance from UNESCO in the category of “culture”. Since then, UNESCO has been issuing mission reports and state of conservation reports.

However, in an interview with the Brenthurst Foundation, the Ministry of Tourism and Heritage representative said that Zanzibar is at risk of losing its World Heritage status.

The ministry’s Fatma Khamis gave a specific example of a Stone Town resident tearing down a beam from a heritage building for firewood. This speaks to a disconnect between sustainability and survival. Indeed, in the conclusions of UNESCO’s  2019 joint World Heritage Centre Reactive Monitoring mission, it says that “the state of conservation of the property remains a point of great concern, that re-enforcement of conservation guidelines and building control is urgent, and that the management system of the property is not functioning effectively”.

Zanzibar’s developmental challenges are in line with the realities that are increasingly common across island economies: a fragile economy centred on tourism that is struggling to diversify.

The island state has a youth unemployment rate above 40% and its population is increasing. Further to this, the effects of climate change threaten the tourism-centric economy. For these reasons it is imperative that Zanzibar deploys sustainable economic growth strategies.

Zanzibar’s tourist industry employs some 50,000 people directly and contributes almost $900-million to GDP each year. But, alas, sitting in a restaurant of an upscale hotel with an ocean view, one is acutely aware that the sea is not far from the window.

In 2020, the global average sea level was recorded at 91.3mm above the 1993 average, making it the highest annual average in the satellite record (1993 to present). This is attributed to climate change.

The United Republic of Tanzania appears on the 26th United Nations Climate Change Conference’s (COP26) list of participants, with guests including the country’s president and other ministers of state.

The Blue Economy and Gender equality

Zanzibar’s Blue Economy brings in $410-million and employs some 208,000 people throughout the archipelago, making it the island state’s largest contributor to GDP.

The importance of growing the Blue Economy in a sustainable manner is imperative. Decisive leadership that is gender inclusive is required for this. The island state’s president, Dr Hussein Ali Mwinyi, who is a medical doctor by training and the son of former United Republic of Tanzania president Ali Mwinyi, is a firm believer in gender equality as a driver of economic growth.

In November 2021, UN Women Tanzania held a ceremony to announce Mwinyi as the United Nations HeForShe Champion. He joins other global leaders as a member of the newly formed HeForShe Alliance. HeForShe is the UN’s global campaign that calls on men to be part of the fight for gender equality in unequal societies where women and girls are on the back foot.

“Through this initiative, I look forward to taking forward our shared determination and commitment to empower women economically, to promote women’s leadership and participation in decision-making, to protect women from violence, and ensure that in all areas and in every way possible, that we are prioritising the needs of women in Zanzibar, and bettering their lives as a whole,” Mwinyi said at the ceremony.

Also blue in Zanzibar, though not part of the marine economy, are the beautiful tanzanite stones that are sold in galleries, in hotels and in alleyways.

The big test for Mwinyi will be to make difficult decisions around sustainability and efficiently allocating resources in the Ministry of the Blue Economy that will enable growth.