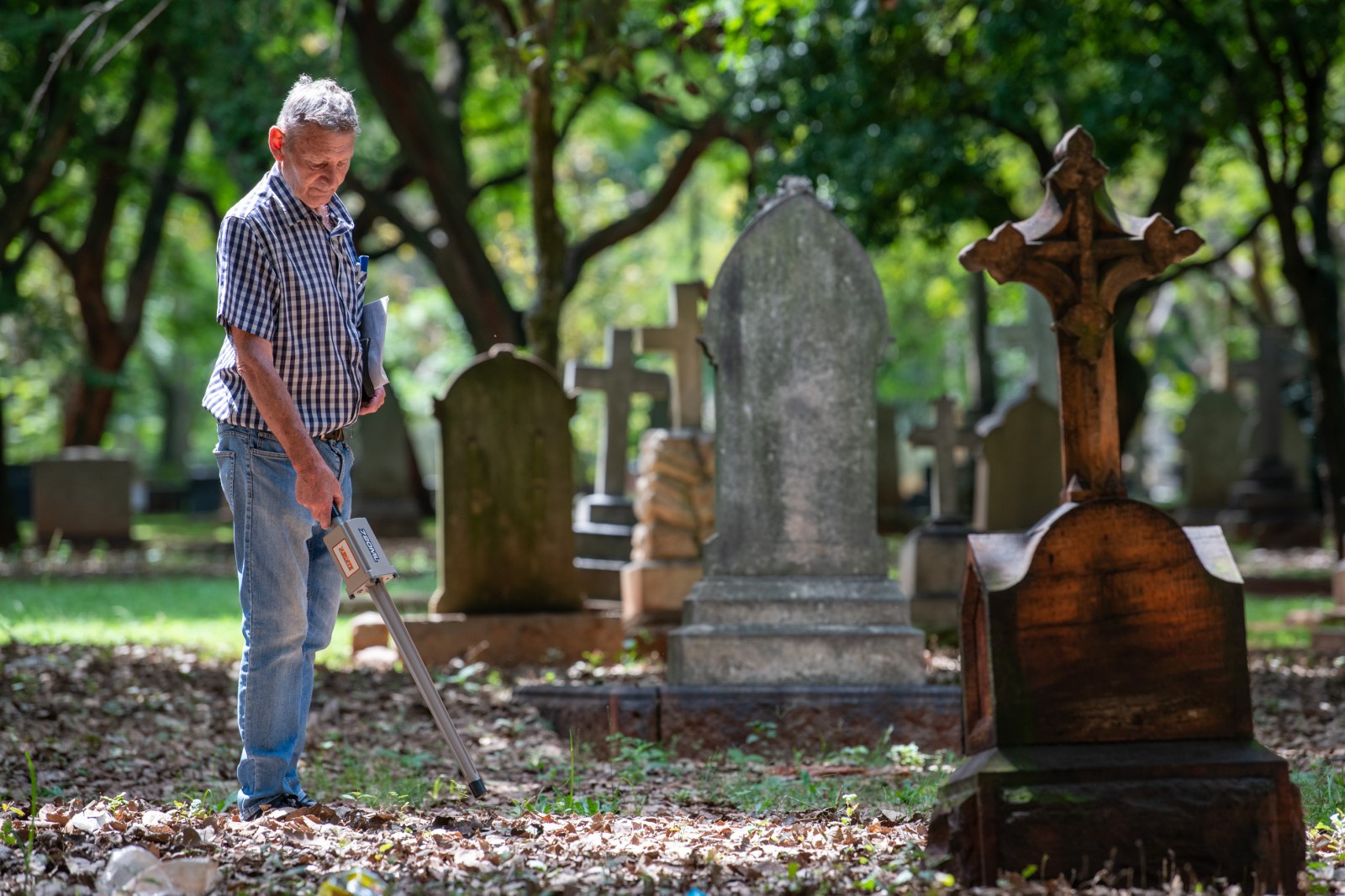 Using a metal detector, Alan Buff is looking for what is believed to be the burial site, in Braamfontein Cemetery, of people who died during the miners' strike of 1922. (Photo: Chris Collingridge)

The man who found the graves of Enoch Sontonga and a host of other famous people has now set about proving what a young boy claimed he saw in the Braamfontein Cemetery 100 years ago.

Alan Buff’s search began next to the collapsed grave at the place where there weren’t supposed to be any bodies. With a metal detector he made a sweep across the broken ground.

If what he was looking for was there, the detector would make a high-pitched whistle, just audible over the morning bustle and din of nearby Smit Street. That metallic whine would announce the presence of, perhaps, a clue.

Nothing. Moving down the grave, the metal detector finally broke its silence.

“It is not in the right spot. The metal detector might be picking up the coffin handles; they were steel back then,” said Buff, a retired horticulturist at Johannesburg City Parks.

This section of the Braamfontein Cemetery, which lies up against its southern boundary, doesn’t have any standing tombstones or the faint, tell-tale outlines of forgotten graves.

It was thought that there were no bodies buried here.

Those who know this open piece of ground call it the Grassy Knoll.

And just like its namesake in Dallas in the US, from where conspiracy theorists believe assassins fired the shots that killed President John F Kennedy, this Grassy Knoll perhaps also holds a mystery.

What Buff was looking for that Tuesday morning were metal grave markers, which provide a number for the grave they are placed next to.

With that number Buff might be able to prove what a young boy claimed he saw in the cemetery 100 years ago.

That boy Buff met as an old man during a chance encounter in the cemetery back in 2009 or 2010. On that day, Buff noticed the elderly gentleman arrive at the Braamfontein Cemetery driven by a chauffeur. The visitor asked Buff to help him find his mother’s grave.

“He said he was close to 90, and he said he always remembers that day of his mother’s funeral,” recalled Buff. “He said that he turned around and looked down on this grassy area and saw a lot of police and army people and quite a few coffins. When he asked a policeman what it was he was told it was from the 1922 miners’ strike. He was of the impression that a lot of people were buried there,” Buff said.

There are problems with this story. For one, there are no contemporary accounts of the mass burial in the cemetery.

There are also no known cemetery maps of the Grassy Knoll area.

And historians believe that they have accounted for most of the people who died during the strike.

“We’re pretty certain we’ve got everybody, but you can never be 100%.

“What about the members of the public that may have been killed at that time? And where were they buried?”

The official death toll for the 1922 strike, in which the army engaged in house-to-house fighting against the strikers on the streets of Johannesburg, was put at 153.

Included in that number were 43 civilians.

The 1922 strike, also known as the Rand Revolt or the Rand Rebellion, had its origins in the latter part of 1921. It began when the price of gold nosedived. Wages were cut and white miners felt threatened when mines began planning to weaken the colour bar, which had prohibited black workers from certain jobs.

“I think that people commemorate the 1922 strike with a great stress on romanticism and nostalgia, without actually delving into the complexity of the period,” said historian Professor Kathy Munroe.

In March 1922, the strike turned violent and became an open rebellion against the state. Violence flared in Johannesburg, Benoni and Brakpan after Prime Minister Jan Smuts called in the army and police to quash the rebellion.

Well-known landmarks around Johannesburg featured in the heavy fighting.

Trenches were dug across Fordsburg Square and strikers fired on troops who were camped at what was to become Ellis Park Stadium. Civilians were killed in the crossfire.

Only recently have historians delved into the lives of some of these victims. One of them was Ah Tong, a Chinese shopkeeper who was shot on 12 March. With the help of the South African Chinese community Tong’s relatives were traced to China.

“The South African war graves project did a heck of a lot of work on the 1922 strike, and they looked for death notices of everyone they could find,” said Sarah Welham of the Friends of Johannesburg Cemeteries.

This weekend, not far from the Grassy Knoll, a memorial will be unveiled in Braamfontein Cemetery to commemorate the centenary of the 1922 strike.

A number of those killed in the rebellion do lie in the cemetery.

Buff’s search didn’t go well on Tuesday. It had to be abandoned because the metal detector wasn’t working properly. He will have to return with a new one. If he can find grave numbers, he will be able to cross-reference them with those listed in the grave numbers book, which will provide dates of burials.

If there is anything to the story the old man told, people who know Buff believe he is the man who will find the truth behind it.

“Buff is a bulldog; once he gets something in his teeth he doesn’t let go,” said Welham. Some of his finds in the cemetery have become legendary.

In 1995, he was tasked with finding Enoch Sontonga’s grave. The last resting place of the composer of Nkosi Sikelel’ iAfrika had been forgotten by time. Nine months later, Buff located the grave.

In 2011, it took him 30 minutes to find the urn that held the ashes of Antarctic explorer Frank Wild. Others had spent countless hours searching for it. The urn was in the crypt at the cemetery and its discovery meant Wild’s wish to be buried alongside his commander, Ernest Shackleton, on the island of South Georgia could finally be fulfilled.

This time, everything will hinge on the metal grave markers.

“If I can’t find those grave numbers then I am afraid it will be the end game.” DM168