Nato defence ministers will meet to decide how to beef... 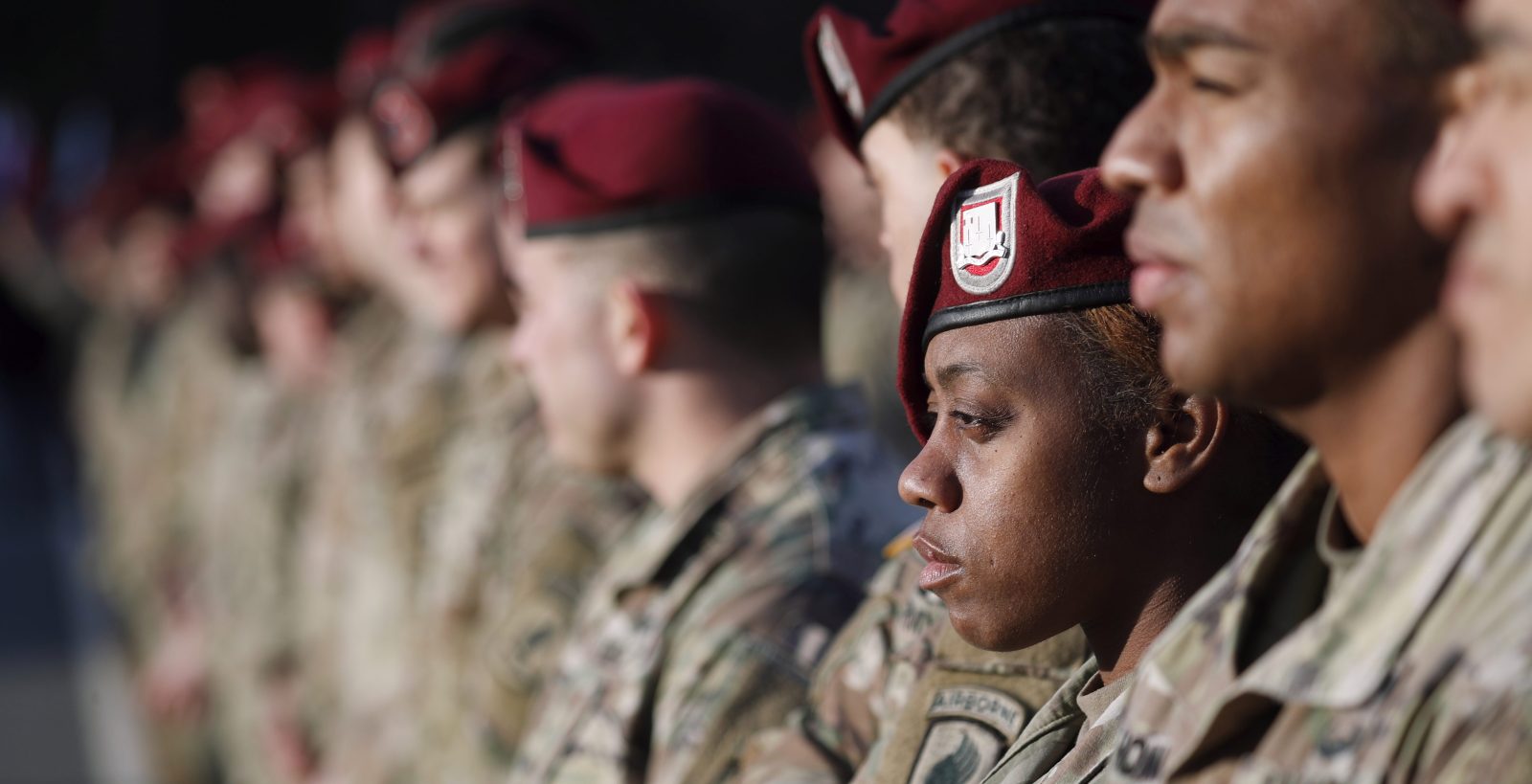 A solemn welcoming ceremony of US soldiers at Adazi military base, Latvia, 25 February 2022. More than 300 soldiers of the 173rd Air Force Brigade arrived in Latvia, demonstrating the US commitment to defend NATO allies and strengthen Latvia's defense capabilities following Russia's military operation in Ukraine. EPA-EFE/TOMS KALNINS

Defence ministers of Nato’s 30 member states, plus Ukraine, Sweden and Finland are to meet in Brussels on Wednesday to decide how to strengthen the alliance in the face of the growing threat from Russia.

“We’ll cover the situation in Ukraine, but we’ll also be talking about some longer-term questions about how Nato should be positioning itself in the future,” the US ambassador to Nato, Julianne Smith, told journalists in an online briefing.

“There are some questions on the table right now about the degree to which the alliance should be looking at medium and longer-term posture changes.”

Smith said that Nato members had started moving more troops to the east even before Russia invaded Ukraine on February 24 – partly as a result of greater readiness in the wake of Russia’s annexation of Crimea in 2014.

The Nato countries had further strengthened those positions after the invasion. But the defence ministers would discuss other steps that Nato members could take collectively to reinforce the alliance’s eastern flank, and whether or not Nato should map out in more detail a medium and longer-term plan.

She noted that a group of Nato member states in eastern and central Europe had come forward right after February 24 and put in a formal request for Article 4 consultations. Article 4 provides for members to consult Nato when they feel they are under threat.

These consultations would continue at the meeting in Brussels when members would state their security concerns and consider what steps to take to respond.

“The countries in east and central Europe do believe that this is a time for a conversation about potential changes of Nato force posture in their neighbourhood,” she said.

Smith was also asked about how Nato would respond if any Russian aggressions spilled over from Ukraine into Nato territory, intentionally or not. This appeared to be a reference to the weekend bomb attack on a Ukrainian military base just 15km from the Polish border.

“We will defend every inch of Nato territory,” she replied, confirming that the US commitment to Article 5 of the Nato treaty remained “rock solid”. Article 5 enshrines the mutual defence commitment of Nato members, on the principle that “an attack on one is considered an attack on all”, as Smith put it.

Smith confirmed that Nato was not ready to impose a no-fly zone over Ukraine. Nato’s goal was to end the war and to stop Russia’s attacks on the Ukraine military and its “indiscriminate” attacks on civilians.

She said a no-fly zone would expand the conflict. She added that the US had learned that the Russians carried out the recent attack on the Ukrainian military base near Poland from a bomber that was flying in Russian airspace.

This raised the question about whether a no-fly zone in Ukrainian airspace would have any major impact on Russia’s ability to attack Ukrainian territory.

Smith also defended the US decision not to help Poland deliver MiG-29 fighter jets to Ukraine. Secretary of State Antony Blinken had suggested last week that the US was ready to replace the MiGs with more modern US F-35s. But the idea foundered as neither the US nor Poland wanted to actually deliver the MiGs, apparently for fear this would provoke a Russian retaliation.

Smith said the US had debated the proposal but decided it was untenable.

“There were a number – and there still are – of open-ended questions about the mechanics of actually moving these planes from Poland to Ukraine.

“There are open-ended questions about pilots, about fuel, about missiles,” she said, adding that the US felt that the details had not been adequately sorted out to allow the transfer to happen.

“And so, at this point, this is ultimately Poland’s decision…”

Asked if the US was considering supplying Ukraine with heavier anti-craft weapons and not just man-portable missiles, Smith said the US and its Nato allies were continuing to look for additional ways to address Ukraine’s air-defence needs.

“We are continually assessing what additional needs our friends in Kyiv have. We will continue looking at what other aspects of or other forms of air defence we might be able to provide to Ukraine.”

And she recalled that the US Congress had voted an additional $13.6-billion of support for Ukraine.

Smith was asked by a journalist about the European Union’s efforts to try to involve China as a mediator between Russia and Ukraine. Did this represent a difference from the US approach to China?

Smith replied by referring to the meeting that Biden’s national security adviser, Jake Sullivan, had with Chinese official Yang Jiechi in Rome on Monday. The meeting was apparently prompted by Washington’s concerns that China might provide military and economic aid to Russia in its war against Ukraine.

Smith said the goal of Sullivan’s meeting with the Chinese “was to really send a pretty clear message that the United States is keen to see every country around the world – and that includes the PRC [People’s Republic of China] – to make clear in this moment where they stand with respect to this conflict in Ukraine, and that they need to stand on the side of the rules-based order.