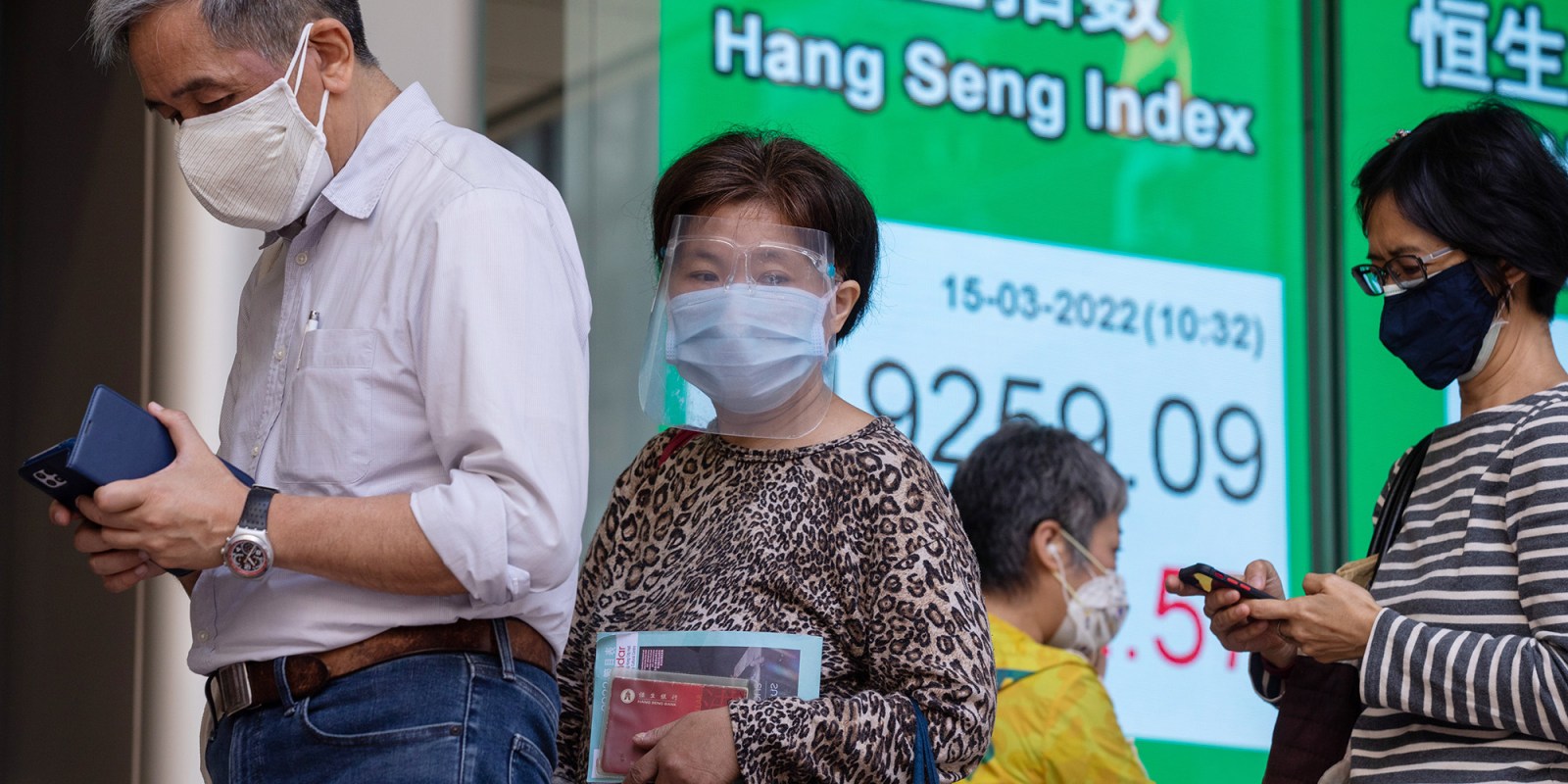 Covid-19 infections in China jumped the most since the early days of the pandemic, and cities across the country responded with additional curbs and lockdowns. Hong Kong plans to close its beaches to fight the infection, local media reported.

Symptomatic cases have been confirmed in 28 of China’s 31 mainland provinces. Langfang, a city just 55km from Beijing, joined Shenzhen and Jilin province in imposing lockdowns. More than 45 million people are prohibited from leaving their homes. International flights are being diverted from Shanghai, the Pudong district is encouraging work from home and the trucking sector is being hit by delays as drivers undergo more stringent testing.

Nearly half of Hong Kong’s population has probably caught Covid, according to one estimate, while South Korea could relax social distancing rules for private gatherings and restaurants. Vietnam clarified the rules on Covid patients, telling them to stay at home, while Taiwan brought its new case count down to zero.

Hong Kong will close its beaches starting on Thursday, local media reported, days after a social media outcry tied to pictures of the city’s residents enjoying the sand and waves as authorities locked down the neighbouring Chinese tech hub of Shenzhen.

Beaches will be cordoned off to prevent the public from entering, a flashback to last summer when they were closed for several months because of an earlier flareup. The city’s renowned country parks also shut down all barbecue and camping sites.

Taiwan appears to have contained its latest Covid outbreak, reporting no new infections or deaths on Monday. It posted an average of fewer than three new cases a day for the past week, the lowest level since early January when the Omicron variant started spreading widely in the community.

Companies are encouraged to let employees work from home, according to a statement on the Pudong government’s official WeChat account. Shanghai reported 105 local Covid cases and international flights are being diverted away from the city to ease pressure on quarantine hotels and isolation facilities.

Amazon, Walmart orders likely to be delayed by lockdowns

Orders placed with global e-commerce platforms from Amazon.com and Walmart may be delayed by lockdowns and restrictions in some of China’s key manufacturing hubs, according to an industry body.

Shenzhen, home to around half of all the online retail exporters in China, was locked down for at least a week on Sunday to try to contain a spreading outbreak. Its 17.5 million residents were told to work from home, with all non-essential businesses and public transport shut. In nearby Dongguan, a key hub for shoes, toys and textiles, factories in areas where there are virus cases have been told to close, and schools and restaurants are effectively shuttered.

“Shenzhen now has pressed the pause key, with operations halted for almost all sectors, and we are no exception,” said Wang Xin, head of the Shenzhen Cross-Border E-Commerce Association. Wang’s organisation represents some 3,000 exporters in the city, China’s main tech hub.

Trucking operations across China are being delayed by more stringent testing for drivers, as local authorities attempt to control new outbreaks under the nation’s Covid-zero policy.

The operational efficiency of trucking services at major port cities including Shanghai, Hong Kong, Shenzhen, Qingdao and Tianjin is expected to be significantly reduced due to the crackdown, AP Moller-Maersk said in an advisory on Monday. Even inland ports along the Yangtze River and in the west Pearl River Delta won’t be spared, the Danish transport giant said.

Nearly half of Hong Kong’s population already has Covid

About half of Hong Kong’s 7.4 million people have already been infected with Covid-19, according to an estimate of the damage caused by the Omicron wave that’s overwhelmed the city.

Researchers at the University of Hong Kong determined that about 3.6 million Hong Kongers caught the disease through March 14. That’s up from an estimated 1.8 million infections they concluded had developed through March 7 based on disease modelling and an in-depth analysis of the ongoing outbreak.

While the current wave peaked on March 4, many more people will catch Covid before it ends, the researchers said. The total is likely to reach about 4.5 million, they said. More than 5,100 people will die from Covid by May 1, the researchers forecast, up from an earlier estimate of about 5,010.

The Philippines economy is on track to hit the 2022 growth forecast of 7%-9% despite global headwinds including the Russian invasion of Ukraine, Economic Planning Secretary Karl Chua said.

Current global tension is “temporary in nature” and the economy can withstand it, Chua told a virtual forum, adding that the impact will mainly be on commodity prices, financial markets and trade.

Under current rules, restaurants and cafes are allowed to operate through 11pm while private gatherings of up to six people are allowed. The government could announce that the new rules would be effective from March 21, after existing measures expire, the newspaper said.

Vietnam says Covid patients are not to leave homes

Vietnam’s health ministry clarified its guidelines for Covid-19 patients and said they must not leave their homes and should avoid leaving quarantine rooms.

China expects the lockdowns it has imposed in some regions to contain the latest Covid-19 outbreak will affect local economic recovery.

The impact will be gradually restrained, Fu Linghui, a spokesman for the National Bureau of Statistics, told a briefing on Tuesday. Enterprises face rising pressure from higher costs and the foundations for economic recovery are not solid yet.

Why China is sticking with its Covid-zero strategy: QuickTake

China reports more than 5,000 cases as more cities locked down

China saw more than 5,000 new Covid-19 infections for the first time since the early days of the pandemic, as outbreaks of the highly contagious Omicron variant see officials lock down more cities and impose restrictions.

There were a total of 5,154 new cases, of which 1,647 were asymptomatic, the National Health Commission said. While not a large number if compared globally, it’s a significant tally for China, which has kept cases low for most of the past two years through a strict Covid-zero strategy that is now being challenged.

More than 4,000 of those infections were in the northeastern province of Jilin, bordering Russia. The region of some 24 million residents was locked down on Monday to try and stymie what has become an explosive outbreak by China standards. Langfang was locked down early on Tuesday, following on from the shutdown of the tech hub Shenzhen on Sunday, the most significant Chinese city yet to be subject to movement restrictions.

Lockdowns aimed at stemming the spread of Covid-19 in China are disrupting the operations of a raft of businesses, with more than 40 million people restricted from leaving their homes as the country faces the biggest challenge to its pandemic containment efforts yet.

Key Apple supplier Hon Hai Precision Industry said it was halting production at its sites in Shenzhen, the southern technology hub that was locked down with little notice on Sunday, its public transport networks halted and 17.5 million residents ordered to limit their movements.

Unimicron Technology, a maker of printed circuit boards, also suspended output in Shenzhen, and BYD, the Shenzhen-based car and battery maker backed by Warren Buffett, said it was seeing some impact on production. The lockdown, China’s first of a so-called tier-one city, is expected to last until at least March 20, with three rounds of mass testing planned to root out cases. DM/MC