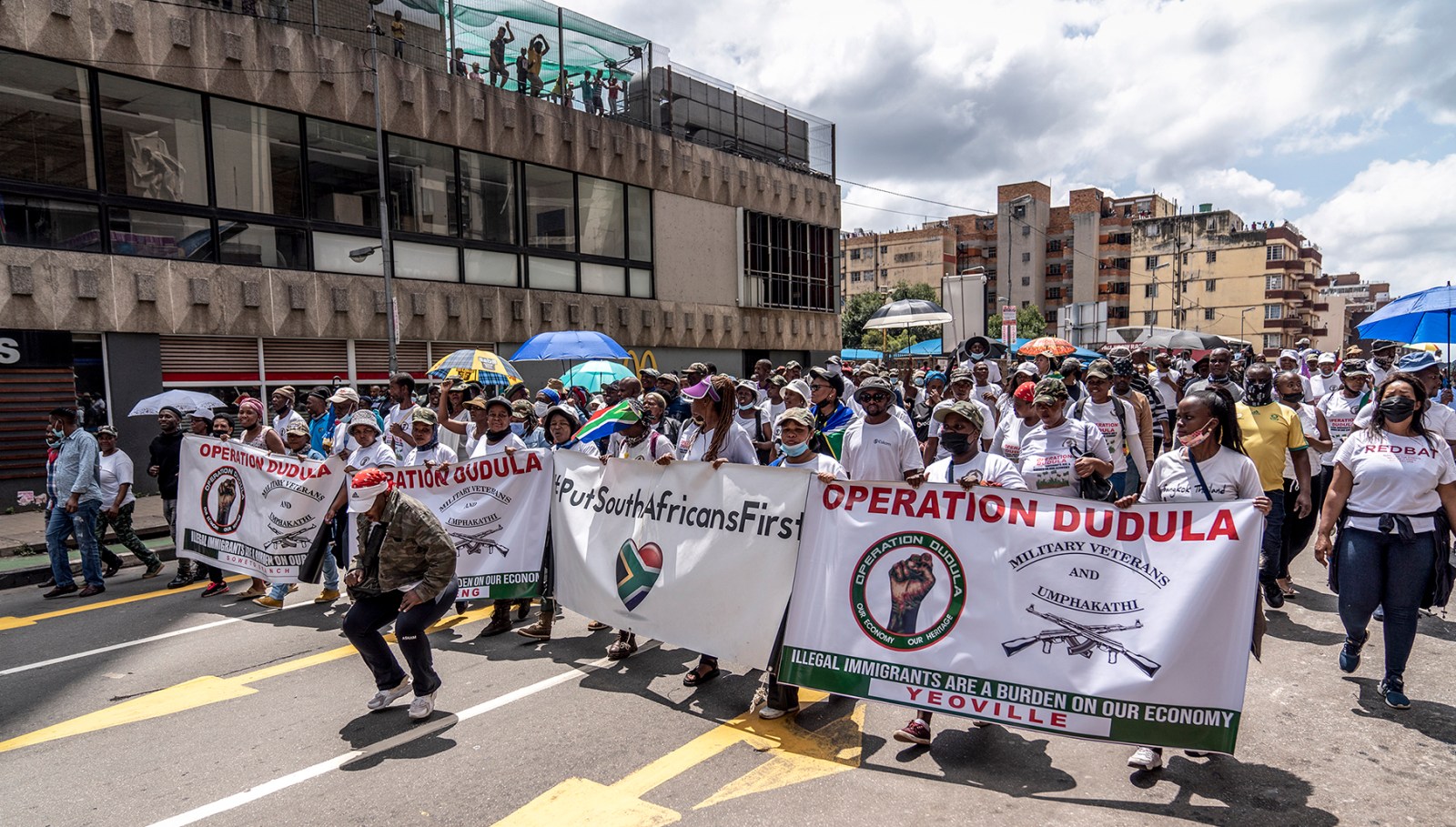 Operation Dudula members make their way down the streets of Hillbrow during their protest on 19 February 2022. (Photo: Shiraaz Mohamed)

If labour market needs were linked to policy, the country could capitalise on the benefits of immigrants.

South Africa’s government is determined to use new policies and legislation to curb the number of foreigners working in the formal and informal economy. Anti-immigrant sentiment isn’t new in the country, and the latest official drive shows why labour market needs must be linked to appropriate policy responses.

Employment and Labour Minister Thulas Nxesi released the draft National Labour Migration Policy for public comment on 28 February. It goes hand-in-hand with amendments to the 2014 Employment Services Act by introducing quotas for foreigners employed in sectors such as agriculture, tourism, hospitality and construction.

Along with the proposed amendments, the National Small Business Act also aims to limit the involvement of migrants in the informal trading sector. The Employment and Labour Department says the new policy seeks to “address population expectations regarding access to work for South Africans and [the] perception that foreign nationals, especially undocumented, are distorting labour market access.”

When plans for the policy were announced in January, the Economic Freedom Fighters visited restaurants in Midrand near Johannesburg to check on employment policies. The opposition party demanded that at least 50% of staff be South African. Members of the Patriotic Alliance party raided spaza shops in Eldorado Park in Johannesburg, accusing migrant business owners of selling expired goods. The party also accused Johannesburg’s city council of preferring foreigners over locals in their hiring practices.

This trend is nothing new and is part of a rising tide of anti-immigrant sentiment. Foreigners, particularly those from other African countries and parts of Asia, are accused of ‘stealing’ jobs intended for South Africans.

In 1994, in his first speech to Parliament, newly appointed home affairs minister Mangosuthu Buthelezi said “the employment of illegal immigrants is unpatriotic because it deprives South Africans of jobs.” Research conducted in 1999 by the Southern African Migration Programme on attitudes towards migrants found that threats to jobs were among South Africans’ main reasons for fearing immigration.

Historically, the presence of foreign workers is linked to regional labour migration dynamics. Since democracy, the fracturing of southern Africa’s contract mining labour system has paved the way for spontaneous and informal cross-border movements. The rise in immigrant numbers, particularly low-skilled and semi-skilled workers from neighbouring countries, has encouraged the belief that South Africa has lost control over its borders and that foreigners are taking jobs from locals.

So far, protectionist and hierarchical labour immigration policies have failed to attract the desired skills and achieve development goals. The Immigration Act doesn’t provide an avenue for legal migration of low-skilled workers, so many economic migrants have used the asylum system to regularise their stay. Consequently, migrants — especially low-skilled, semi-skilled and failed asylum seekers — have been portrayed as problematic to society.

The “South Africa first” employment policy, enforced since 1994, reflects a politically motivated intention to protect local workers, despite the objective of matching skills and labour market needs. Legislation has sought to promote economic growth by facilitating the recruitment of highly skilled workers while excluding those with fewer skills coming from other African countries.

Over the years, policy interventions in the absence of a comprehensive labour migration policy have aimed to exercise strict control on unskilled labour. Several attempts have also been made to bar foreigners from operating informal businesses. In 2013 the draft Business Licensing Bill, later withdrawn, sought to exclude foreigners from the informal economy, while more recent amendments to the Refugees Act restrict asylum seekers’ access to work. Women informal traders are especially hard hit by these interventions.

Attempts to control migration through tough laws are often justified by the need to stop unlawful recruitment practices such as hiring irregular migrants. But a 2014 study by the Migrating out of Poverty Research Programme Consortium shows that South Africa’s government spends hundreds of millions of rands yearly on migration control, with little effect in reducing irregular migration.

Rather than sanctioning migrants and employers, it should deal with the real problem — its failure to manage international migration and promote access to dignified work for all.

The argument against the exploitative practice of recruiting ‘illegal’ migrants is morally compelling, but other issues cannot be ignored. First, violations of immigration law are often due to administrative inefficiencies. Many asylum seeker visas aren’t extended because understaffed refugee reception offices can’t process their applications. The failure of Home Affairs’ online processing system is also a factor.

Also, the absence of legal avenues for migration and lack of visas for low-skilled/semi-skilled workers and small-scale traders have pushed migrants into ‘illegality’. Government should revise its permitting regime to provide adequate options for migrants with lower levels of skills and capital.

Second, besides the ‘mega-blitz inspections’ targeting the hospitality sector in January, the labour department has shown a limited institutional capacity to enforce labour laws and little interest in protecting migrants’ rights.

Regionally, South Africa’s lack of political commitment to enforcing workers’ rights is highlighted by its non-ratification of the Southern African Development Community (SADC) Protocol on Employment and Labour. The same goes for two International Labour Organization conventions on migration (N.97 and N.143).

With the new National Labour Migration Policy released for public consultation, comments must be constructive and focus on ensuring legal pathways to labour migration and improving the labour inspection system.

Much of what’s needed is already included in Home Affairs’ 2017 White Paper on International Migration, which the labour department has endorsed in its new policy. This includes the proposal to introduce a permitting regime based on quotas, and regulate legal migration from SADC that isn’t constrained to specific sectors.

To ensure that such a regime is efficient, the government could establish an African qualification framework that favours skill matching. South Africa could then capitalise on the skills of the many migrants and refugees currently forced into informal and low-skilled jobs because their qualifications aren’t recognised. DM