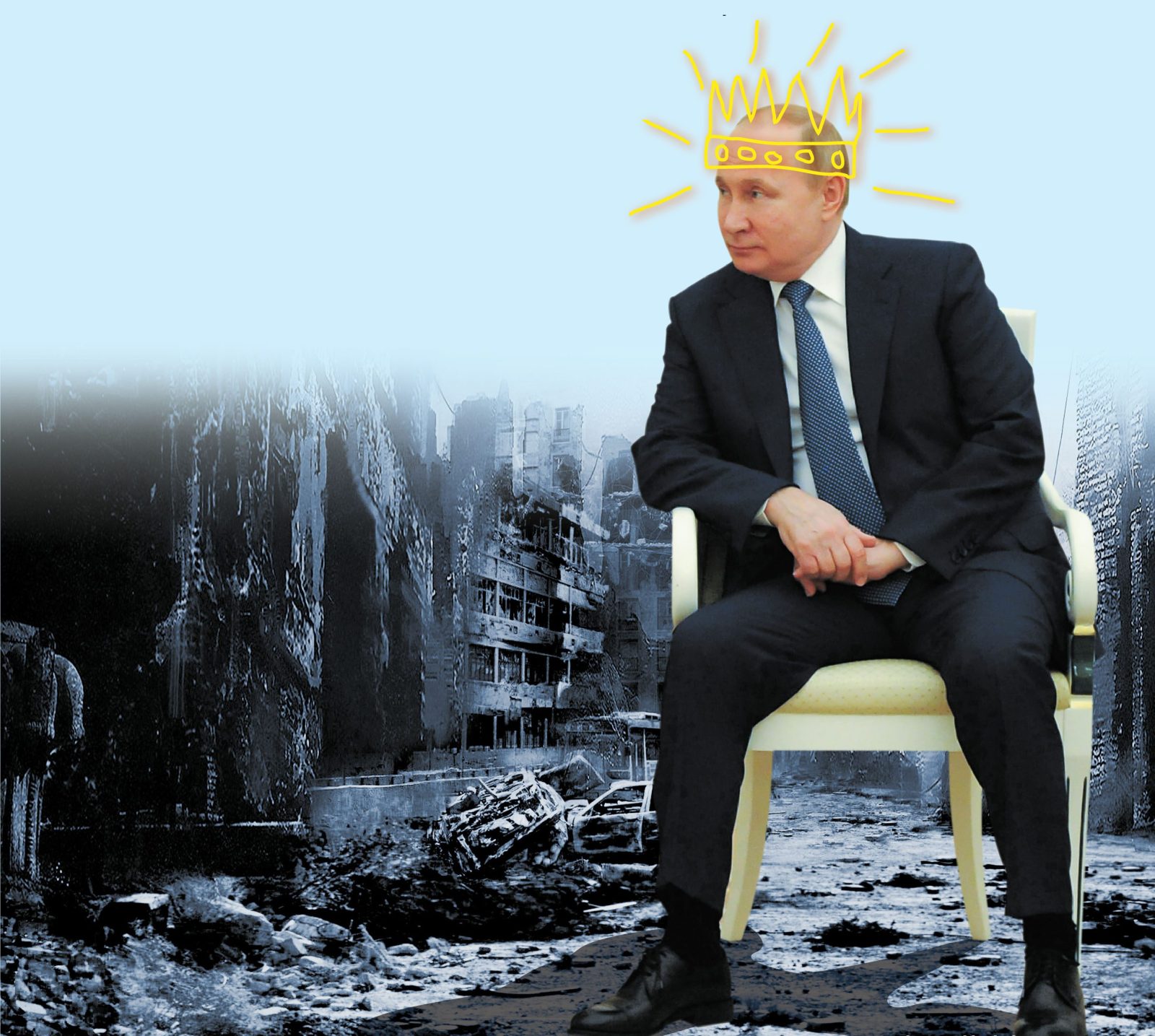 Our country’s refusal to take a stand against Lord of the Wasteland Vladimir Putin is a tad puzzling, to say the least.

Russia’s Supreme and Glorious Leader is busy flattening Ukraine so he can be Lord of the Wasteland. There has been much puzzlement over South Africa’s refusal to condemn Vladimir Putin and over its abstention from the United Nations vote to censure the Great Dictator, so we asked around to get some insight into this state of affairs.

First we spoke to a senior official in the Department of International Relations, who wishes to remain anonymous out of pure embarrassment. We have disguised this official’s gender, race, colour and body-fat ratio so that they cannot be identified by any South African state security agents secretly working for the Russian Federal Security Service or for Jacob Zuma, which comes to the same thing.

“Well,” said the official who cannot be named, though we can say they were delicately sipping a cappuccino as they spoke, “first we have to pay attention to what the President says, which is that this is no time to be pointing fingers.

“Certainly, the President says that a lot, about a lot of things, but it’s especially important when one side in a conflict is waging a brutal, unprovoked war against a peaceful, democratic neighbouring country.

“We don’t want to point fingers. We cannot take sides. We do need to garble out some vague anti-Western rhetoric, because that sounds good to our partners in China, India and Wherethef*ckarewestan, but it’s really just pro forma and nobody takes it seriously, except perhaps the DA, but we know they are irrationally attached to hating dictators and friends of Zuma, so it counts for nothing.

“No, instead we have to treat Glorious Leader Putin with compassion. We have to ask: what are his needs in this present moment? How are his present actions determined by the terrible trauma he has gone through seeing the Soviet Union collapse and lose its empire?

“I won’t say we’re intimidated by Commander-in-Chief Putin, but we do acknowledge that he’s the only person who is able to save our beloved leaders Zuma and DD Mabuza from death by poisoning. He can’t save South Africa from their toxicity, but then that isn’t his job, is it? He’s very busy riding around on bears and so forth.

“Also, there’s that nuclear power thing that Gwede Mantashe may want to revive sometime, maybe once Cyril has seen his gat.”

“We feel it’s better to not say anything at all, in case Lord Putin has a hissy fit, but we’re very busy thinking about what we’re not going to say, so South Africans can be reassured we’re doing something.”

So there you have it, if not from the horse’s mouth then from the lips of a donkey vaguely reminiscent of a horse.

We went further, however. We approached Minister of Tourism Lindiwe Sisulu for her comments, because we know she has had significant contact with Führer Putin (there are pictures!) and thus may have some insight into his thinking.

“Ah, I’m so glad you asked me,” Minister Sisulu told us, “because as you know Vlad and I have shared some special moments.

“Well, actually just the one special moment, but it was so special that it holds the promise of more special moments, sometime in the future, perhaps when he has rebuilt his empire and can relax once more, back at his 97-room palace with the eight helicopter pads and nine tennis courts, not that he plays tennis.

“Vladdy is actually a very sensitive soul, as one can tell from those high cheekbones and the Slavic slant to the eye. He has such an enigmatic smile! I just felt drawn deep into his Slavic eyes when he turned his enigmatic smile on me.

“Yes, some say he can’t smile properly because he’s had Botox treatments to his face, as well as other significant parts of his body that need to stay puffed up, but we all need to pay attention to our own wellbeing in these trying times, and a great appearance is very necessary to wellbeing, no matter what tortured, evil feelings we’re harbouring inside.

“I, for one, find it necessary to get my nails done every day, because that helps to process my feelings of antagonism towards the South African Constitution and the rule of law, as well as my thwarted ambitions.

“And, speaking of thwarted ambitions, I can tell you it’s not easy to have those burning in your breast, and I as a Woman Warrior can empathise deeply with Vladdy and his thwarted ambitions. He wanted a big battle? So what. We all do. He wanted to crush his enemies who embrace democracy and those who keep going on about how he’s a psychopathic megalomaniac? Completely understandable. I mean, how would you feel if people were constantly saying you’re a murderer who’s willing to blow up the entire world if everyone doesn’t bow down and worship at your feet?

“I can identify,” said Minister Sisulu, signalling to a minion for another glass of unwooded Chardonnay. “Besides, deep down Vladdy isn’t a fighter but a lover. He only fights because his empire isn’t expanding as fast as he’d like, and I get that. He hasn’t got very big hands, but he knows what to do with them. That’s the kind of world leader I like.”

For a contrasting view, we spoke to Duduzile Zuma-Sambudla, daughter of the Russian leader’s bestie. She had been tweeting messages of support for Putin (the usual “Burn it to the ground!” kind of stuff), but still her comments were revelatory.

“That Lindiwe bitch must stay out of my way,” said Zuma-Sambudla, tossing her fake half-dyed dreads hither and thither in the Nkandla breeze. “She mustn’t come and think she can muscle in with her big hair! I know what she’s been saying about Vlad, because a few rogue SSA agents are still sending phone taps to my dad. And what Sisulu is saying is outrageous!

“I mean, how is Vlad to respond to these coochy-coo kissy-kissy messages from Lindiwe? I don’t think he has responded. He’s busy waging an illegal war of conquest, for heaven’s sake! That’s why he hasn’t responded to any of my messages, either. I don’t hold it against him.

“I sent him a lovely little video of me twerking my beautiful, perfectly rounded, naked bum – and he said nothing. But there’s a media and communications blackout over Russia, perpetrated by the evil Western imperialists and the running dogs of White Monopoly Money, so that’s why. He’ll get back to me one day, and then you’ll see…

“Oh, the war itself? Well, yes, I have some views on that. They are deeply informed by my father’s experience in his many years in power, or in fact just before he ascended to the throne. You remember that desperate Khwezi assault on his integrity? Okay, well, that’s what I’m using as my guideline here – that and my dad’s magnanimous response to such provocation.

“If Ukraine is going to go around draped in the kanga of democracy, practically shoving its freedom and independence in Vlad’s face, what do you expect him to do? He’s a man, after all. Not a real Zulu man, but a man. A big man. In my humble opinion, Ukraine was asking for it.” DM168