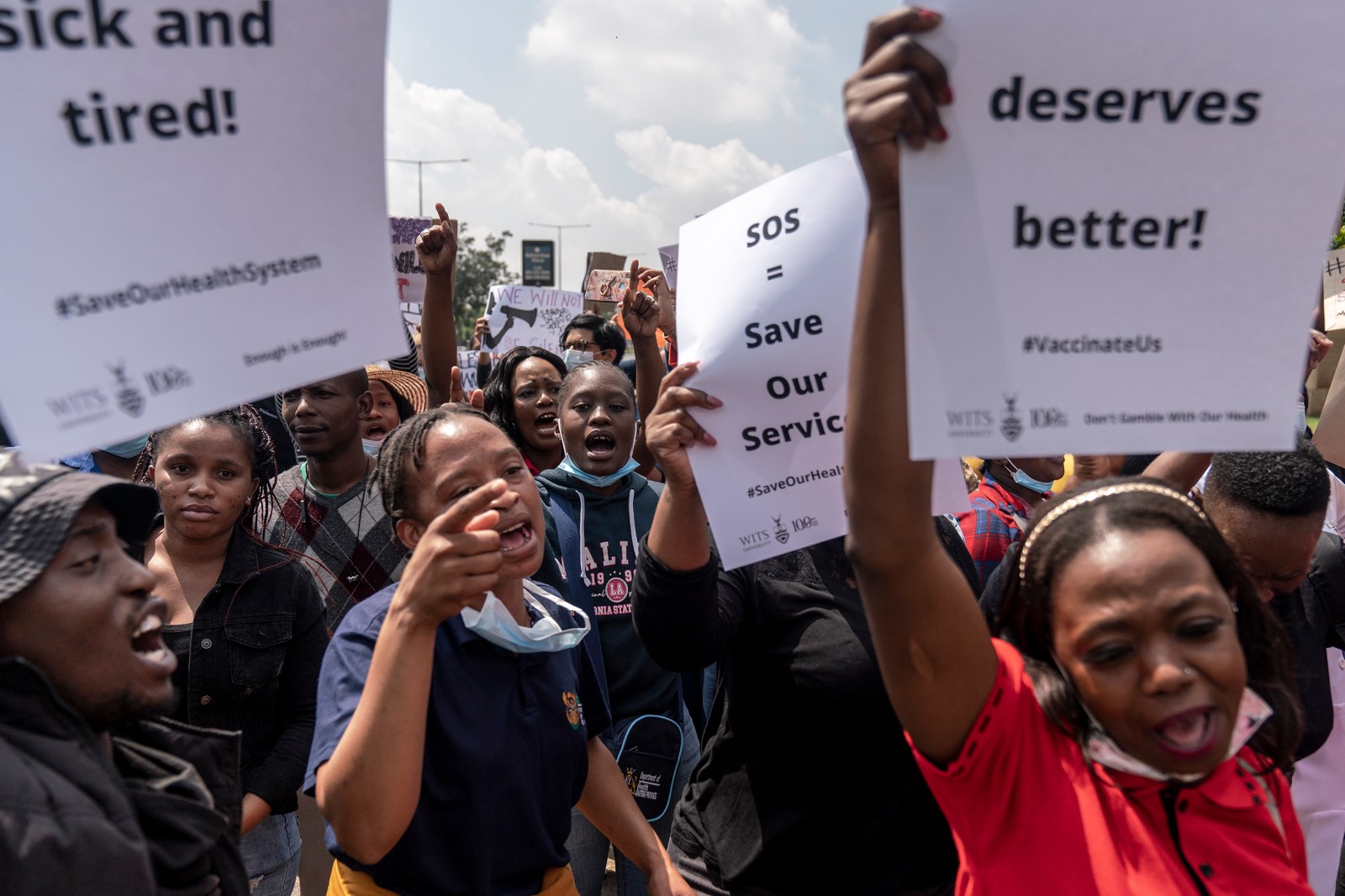 Rotting human tissue is piling up at Gauteng hospitals as services are suspended over non-payment. The collapse in management is bringing what was once a ‘comprehensive healthcare system’ to its knees.

Another week, another crisis – actually three crises – for the failing Gauteng health department. This week it’s a biological waste management catastrophe, food shortages for patients and the termination of more than 800 critical staff posts.

It comes off the back of news last week that junior doctors in the province’s hospitals hadn’t been paid their salaries for two months. The matter remains unresolved despite the department saying on 7 March 2022 that all bar three doctors’ salaries had been paid.

Mounting crises, spin and the inability to sustainably resolve issues has amplified the call for the department to be placed under administration and for non-performing staff and political appointees to be axed so an overhaul of the department can begin.

This would include the appointment of a permanent chief financial officer and other key personnel, decentralising procurement and supply chains, auditing tenders and contracts, and holding to account those who serve on boards and councils meant to monitor, regulate and raise alarms in the healthcare system before they become crises.

Responding to DM168’s questions, the Gauteng health department said “the post of the CFO has been advertised, interviews conducted, competency test concluded, security vetting concluded. What remains is the sign-off of the certificate by State Security Agency.”

As to whether the department should be placed under administration, spokesperson Kwara Kekana responded with “the Office of the Premier to respond”.

The company has the largest of the two waste services contracts with the department, servicing more than 125 health facilities.

A senior clinician said they’re being told “contingency stories”. He added: “When we ask what we are going to do about the medical waste problem we’re told Bara has a cooler – so it means people’s amputated legs will be thrown into this cooler instead of being disposed of – it is ludicrous. We have capacity for only one more week to store medical waste.”

The clinician continued: “It all comes down to the Gauteng health department being a failed department, and it should go into some form of rescue. We can keep bringing up all these issues; it will be waste this week and something different next week. The common thread is that the department is broken.”

At Charlotte Maxeke Hospital the supply of plastic-lined cardboard boxes for biohazardous waste and yellow plastic disposal boxes for “sharps” has run out. Filled containers have also not been collected for disposal. The hospital too is serviced by Buhle Waste Services.

Professor Adam Mahomed, head of internal medicine at the hospital, said: “These boxes are now just pushed to a corner and kept in the different wards and there is rotting human tissue and blood in them, so it has started to smell and is becoming a hazard for patients and staff.”

A frustrated Mahomed has called for MEC Nomathemba Mokgethi and premier David Makhura to account for this and slammed both for being ineffective, disengaged and failing. The hospital’s deadline for its casualty department to open at the end of this month looks likely to be delayed again, he said. It’s been 11 months since a fire ground operations to a halt at this critical healthcare facility.

“If it’s not on their own political agendas then nothing happens. We have to keep hammering the health department and we need to call out individuals now, starting with Mokgethi and Makhura,” Mahomed said.

According to Dr Aslam Dasoo, convenor of the Progressive Health Forum and organiser of the Open CMJAH Now campaign, it gets worse: “We are hearing that fridges that are used to store placentas and afterbirths before they are disposed of are full. Staff have begged the mortuary to open up space for them, but it’s still not going to be picked up for disposal.”

Buhle Waste Services confirmed it has been issued lawyers’ letters by the Gauteng health department.

Dasoo said: “The department don’t have money, because they’ve squandered it. Then services break down and they threaten service providers… they can litigate because they don’t pay for it themselves.”

Buhle Waste’s Sekete added: “It seems that Buhle is being threatened with legal action for not being paid for the services we have rendered.” He said the relationship has become marked by non-communication from the department, endless waiting (for payment and response to communication) and now the threat of legal action.

The health department, responding to DM168’s questions, said that by the evening of 10 March “[waste] collection has resumed at all affected facilities”. It also said these services had never been suspended and that “Buhle Waste… has been paid monthly since the beginning of the current financial year, without fail”.

According to the department, the outstanding balance owed to Buhle is R9.5-million, dating back to the 2014/15 financial year. Buhle stands by its figure of R27-million and said it would consider counter legal action.

The new financial year for the department begins on 1 April. The department was given R59.4-billion of the R153-billion provincial budget for 2022/23.

DA health spokesperson Jack Bloom said the financial year has for years begun with having to settle accruals of “well over R100-million”. March “is always called the ‘dry season’ when payments get deferred and services get disrupted. It means each financial year starts with historical bad debt eating into the budget. It’s poor financial planning and bad management and to solve this we need to start employing people in the department who are fit for purpose.”

Meanwhile, on 10 March staff held a lunchtime protest at the gates of Chris Hani Baragwanath Hospital against the department ’s plans to scrap 819 posts created to respond to the Covid-19 pandemic.

According to Professor Mmampapatla Ramokgopa, chairperson of the hospital’s medical advisory committee who organised the protest, those affected “cut across doctors, nurses, support staff and pharmacy staff. They are people who volunteered in a time when no one wanted to come close to the hospital – they really are the heroes who assisted when Bara was under massive pressure,” he said of the worst of the Covid waves during which the hospital treated up to 700 patients in peak infection periods.

Hospital management was quick to threaten protesting staff to “recant your position to engage in unprotected industrial action”. And even as the protest wrapped up, the first notices of termination of services for 31 March were handed over.

A statement from the department said there is no budget to retain all those on temporary contracts and permanent appointments would be made “based on service needs at each hospital and the availability of budget in each facility”.

In the Covid-19 response plan, 8,000 temporary posts were created in the province for two years. The Gauteng health department received R2.2-billion for employee compensation. This was reduced to R1.1-billion for the 2022/23 financial year.

Ramokgopa said the decision is grossly out of step with the realities of what a hospital like Baragwanath needs. This “disconnect” happens because “Gauteng health department staff don’t even come to the hospital to see and hear what the people need”. It’s why he said Baragwanath staff had to take a stand and protest.

“We need to ask questions about how we are spending our resources. What do we actually get back from every rand we spend? Some contracts are just about milking the health budget and waiting for a new financial year to take more. Then instead of thanking staff who literally saved us and showed us their resilience during Covid, the department terminates their contracts. It’s callous,” he said.

It’s also emerged this week that staff at Baragwanath have been bringing in extra meals for patients and contributing groceries and their own money to a “Random Acts of Kindness” feeding scheme and bread-baking initiative because food shortages have meant patients are going hungry.

Some nursing staff, Ramokgopa confirmed, bring toilet paper from home – so dire has the mismanagement of resources become.

The Gauteng health department tweeted that the hospital had not run out of food and that only bread was in short supply but “bread supply capacity [has] improved”.

Activists, doctors and civil society organisations have vowed to keep up the pressure on the department, including more protests, Dasoo said. He added: “There is no reason for us to trust that a dysfunctional Gauteng health department is capable of running the system. Over 20 years they’ve ruined the most complex and comprehensive health system on this continent.” DM168