A customer pays for maize in a shop in Soweto south west of Johannesburg. (Photo: Gallo Images)

The good maize production in South Africa this year gives a short window to plan for the next El Niño which will mean severe droughts for the region, and to build resilient regional food production to guard against global changes. By supporting production across the eastern and southern Africa region, when South Africa experiences drought, it can draw from the region as a whole, which will be less reliant on food imports from the rest of the world.

The war in Ukraine is dramatically compounding global food price increases already being caused by the climate emergency, notably the ongoing drought in Brazil. Predictions are being cut regarding stocks of maize, wheat and soybeans around the world and prices are soaring.

The future is now, and it demands an urgent response.

South Africa is in a climate-change hotspot, with double the average increases in temperature projected and declining rainfall. If the world heats by 2 degrees, South African temperatures will rise by 4 degrees. As the latest International Panel on Climate Change report observed, there is an imperative for adaptation strategies.

South Africa is also fortunate in that there is good average rainfall and abundant water for agriculture to our north where, in countries such as Zambia and Tanzania, there are some of the best areas in the world to sustainably expand agricultural production. This potential has, however, been stymied by the lack of effective regional strategies to link increased agricultural production with improved logistics and market information through to agro-processing so as to foster resilient and diversified agro-food production.

While 2021/22 has brought good rains in Southern Africa, we cannot be complacent. The 2015/16 drought, the worst for around 30 years, resulted in maize shortages and prices jumping in South Africa. Maize prices doubled over 2015, from export levels to above import levels (shown in the graph). This was due to an El Niño weather phenomenon and, when this next comes, it is likely to be much more severe. 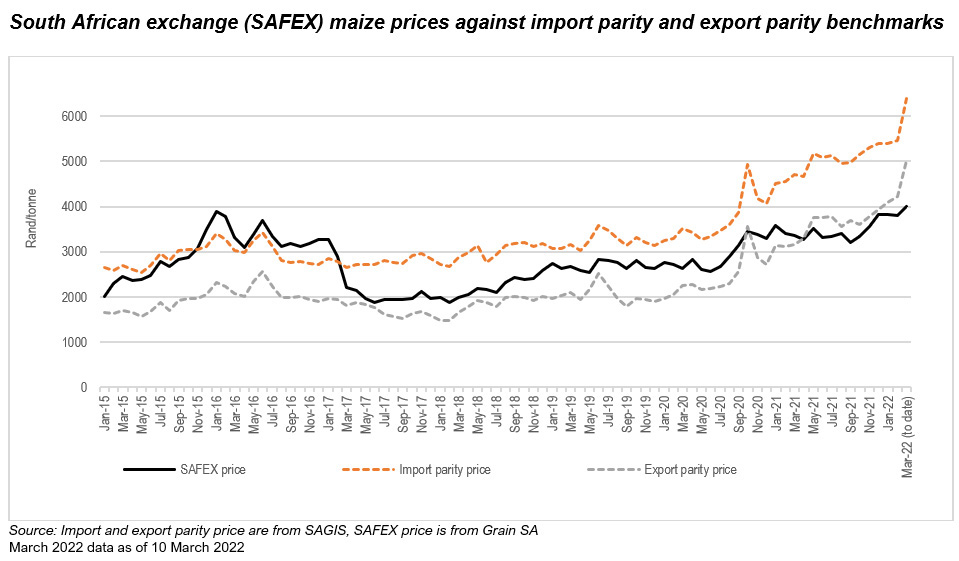 Source: Import and export parity price are from SAGIS, Safex price is from Grain SA (March 2022 data as of 10 March 2022)

If we had drought conditions now on top of the food price spikes, maize prices would be almost twice as high as they are already.

There are clearly massive effects on the affordability of food for consumers, especially low-income households for whom staple foods are a large proportion of their spending.

The climate crisis is an urgent concern

The La Niña climate pattern which is causing droughts in South America is one of the three states of the El Niño Southern Oscillation weather phenomenon (which also has neutral and El Niño states). Lower crop production in key growing areas in Brazil and Argentina have been driving food price increases since the second half of 2021, driving global food-price inflation.

Furthermore, global fertilizer prices increased drastically to now, up from the second quarter of 2021, driven by rising natural gas prices. Since fertilizer is one of the key inputs in crop production, high fertilizer prices pose a threat to food security worldwide. The Russian invasion of Ukraine means fertilizer prices are continuing to increase along with fuel and food prices.

The good maize production in South Africa this year gives a short window to plan for the next El Niño which will mean severe droughts for the region, and to build resilient regional food production to guard against global changes. By supporting production across the eastern and southern Africa region, when South Africa experiences drought, it can draw from the region as a whole, which will be less reliant on food imports from the rest of the world.

The climate emergency, Covid-19 and now war in Ukraine have all pointed to the importance of ensuring resilient regional value chains. A regional industrial strategy in SADC that takes into account the dynamics of regional (and global) value chains and promotes regional linkages is necessary.

This strategy needs to address: climate change implications; the growing and urbanising population with shifting preferences towards processed food products, meat and poultry; and lowering barriers to entry for smaller agri-businesses.

However, markets are not working well across the region. There are large price differences across borders which are much greater than reasonable transport costs. This points to bottlenecks in transportation, logistics and border issues. Therefore, investments in transport, logistics and storage facilities are required.

In addition to the challenge of adapting to extreme weather from climate change, African countries also face the challenge of growing agricultural production to meet food demand. There is huge potential for addressing these challenges across eastern and southern Africa, where there are good soils and water availability in many countries. However, markets are not working well, especially for small and medium-scale farmers and agri-businesses which are at the heart of inclusive food value chains. Therefore, for its sustainable food supply, South Africa needs urgent measures to make markets work better across the region.

The case for a regional market observatory

The market observatory, launched by UJ’s Centre for Competition, Regulation and Economic Development, is motivated by indications that markets have not been working well in southern Africa, especially for small and medium-scale farmers and agri-businesses which are at the heart of inclusive food value chains. It supports the agenda for agriculture and regional integration in the face of climate change as it seeks to provide an information base to bolster the participation of smaller market participants and to map out market responses to the impacts of climate change.

Furthermore, the market observatory emphasises the importance of a better understanding of market trends, to identify competition concerns, within and across borders, and complementary measures such as for transport and logistics, storage facilities, investment in infrastructure, water management and other climate change mitigating strategies to foster regional integration.

Smaller producers and agri-businesses are integral in growing production and ensuring the fairer and more competitive markets required for the benefits to be widely shared and sustainable. Small to medium-sized farms and agri-businesses have been growing strongly in many countries yet face many disadvantages in markets, especially relative to large multinational trading groups. Action, including market monitoring, effective competition enforcement and investment in the necessary infrastructure and support, is required to shape markets to work better. DM/MC

Ntombifuthi Tshabalala and Simon Roberts are from the Centre for Competition, Regulation and Economic Development, University of Johannesburg.