Fifa’s Russia ban is rare – but strips bare the ide... 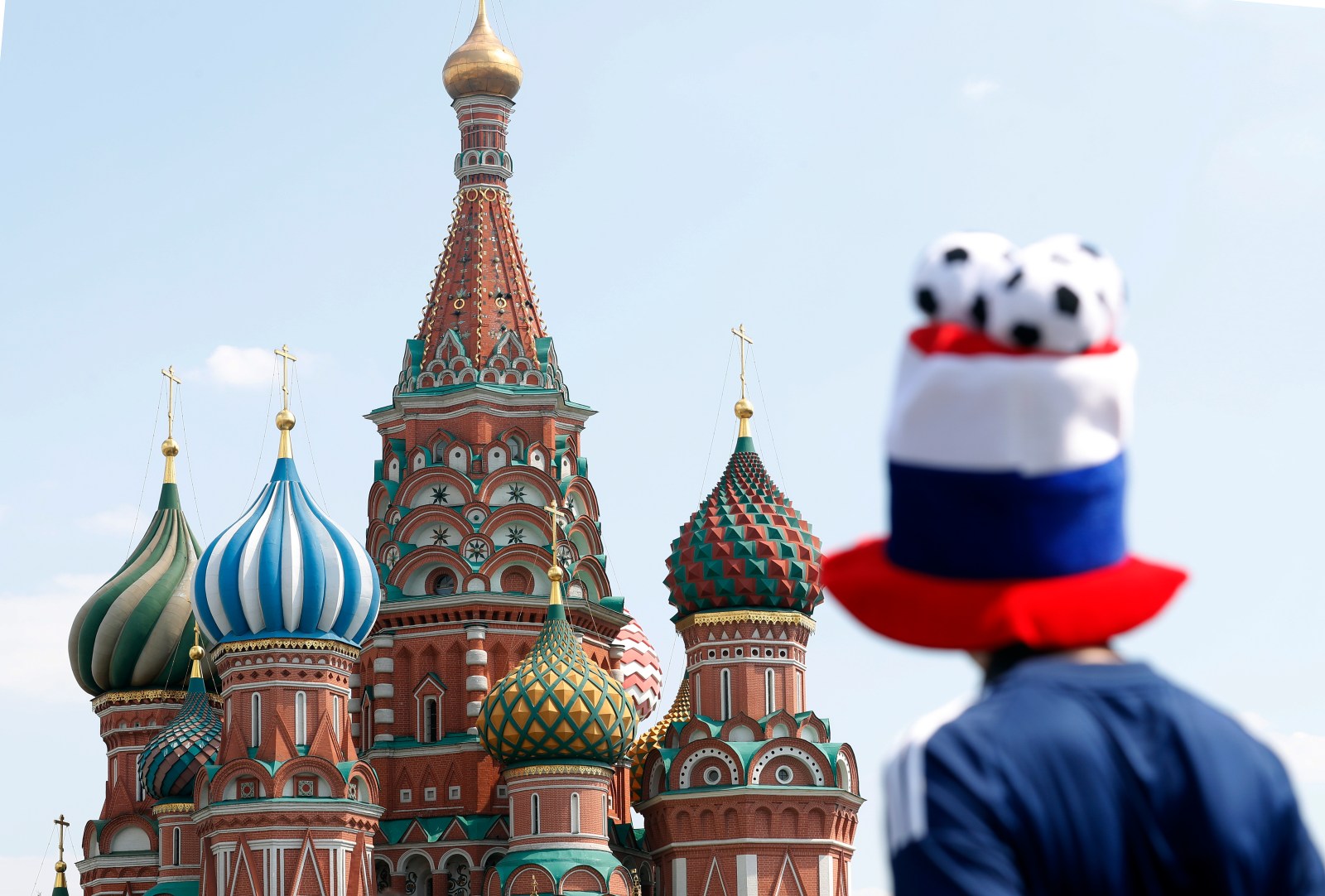 A football fan with a hat of the Russian flag looks at the Saint Basil's Cathedral in Red Square during the Fifa World Cup in Moscow on 18 June 2018. (Photo: EPA-EFE / FELIPE TRUEBA)

The decision by Fifa on 28 February 2022 to suspend Russia from international competition – a move that could see the national team excluded from the 2022 Fifa World Cup – breaks with a tradition of inaction by soccer’s world governing body over the ethical failings of its member states.

Other than the exclusion of South Africa and Rhodesia during the apartheid era, examples of preventing national teams from competing are hard to come by.

Nazi Germany took part in the 1938 World Cup, as did France in the World Cups of the 1950s despite that country’s bloody wars against independence movements in Algeria and Indochina.

No sporting sanctions were placed on the Argentinian junta, which detained and executed its own population inside football stadiums, and went on to host the 1978 World Cup finals.

Nigeria competed in the 1970 World Cup qualifiers despite its government waging a war against Biafrans, which resulted in up to two million deaths by starvation.

The list goes on. But the point is that Fifa does not usually punish national teams for the actions of the country’s government. Even in the instances where Fifa has banned authoritarian countries, it hasn’t been because of the actions of the state.

Myanmar was excluded from the 2006 World Cup not because of the country’s brutal military dictatorship, but for failing to play a World Cup qualifying game against Iran four years earlier. Syria was not allowed to qualify for the World Cup in 2014 for fielding an unqualified player rather than because of the atrocities committed by the government of Bashir Al-Assad.

Fifa’s rationale stems from a desire that sports should not be political. It is a fig leaf that generations of Fifa administrators have hidden behind.

But, as a scholar who has written extensively about sport and politics, I believe it is absurd to claim that world soccer can be apolitical. International sport is organised around the concept of a nation-state.

Governments have been quick to celebrate any triumph of their nation’s sporting teams as evidence of their own greatness – or even punish a team for poor performance.

There are several reasons why the Ukraine invasion has served to break Fifa’s policy of viewing national teams apolitically. The brutality of the Russian aggression is one, the self-evident innocence of Ukraine is another.

This scenario has led to an outpouring of sympathy shared among fans and players across Europe. Aiding this is the fact that Ukraine’s elite soccer players are scattered across some of the highest-profile teams in Europe.

It should also be acknowledged that this sympathy in Europe appears to be related to what at best you can call cultural proximity. Palestinians, Yemenis, Afghans, Iraqis and Syrians must wonder what they have to do to make their sufferings as immediate as those of the Ukrainians.

Indeed, persistent calls on Fifa to suspend Israel over its treatment of Palestinians have fallen on deaf ears. Similarly, soccer protests over China’s treatment of its Uyghur population are unlikely to result in censure of the Chinese national team.

Nonetheless, sporting bodies, including Fifa, have become a little more welcoming of protest by players of late.

The willingness of at least some sporting authorities to condone players’ public protest of racial discrimination – taking a knee before the start of a game has become a common sight in Europe’s top soccer leagues – has paved the way for further acknowledgment of sport’s political dimension.

Very few outside Russia will be doing anything other than applauding Fifa’s decision. However, I believe it’s time for Fifa and other sports leagues to develop long-term policies, rather than an ad hoc reaction under public pressure.

Sporting bodies can begin by considering the legal basis for the current decision, which looks set to be challenged by the Russian Football Union.

Fifa’s decision took its cue from the International Olympic Committee, which called on other sporting bodies to act after Russia was deemed to have breached the “Olympic Truce”.

This marks a recent revival of an ancient Greek concept in which city-states were required to halt any hostilities to allow athletes safe passage to compete during the games. City-states that did not honour the truce faced sanctions.

Since the 1990s, there have been several attempts to revive this tradition, and the UK succeeded in persuading all UN members to sign an Olympic truce for the 2012 Games in London.

A similar truce was endorsed by the UN for the recent Winter Olympic and Paralympic Games in Beijing and was due to expire on 20 March. It was for breaching this truce that Russia was sanctioned by the world’s sporting bodies.

Of course, Fifa would have faced the same pressure to act even if Putin had waited for the truce to expire before invading Ukraine. And it is worth noting that several large sporting nations – Australia, the US and India among them – refused to sign up for the truce because of China’s alleged human rights abuses.

A new set of ethical principles?

If sports are to be organised around ethical principles rather than knee-jerk reactions to current events, I believe some kind of consensus about ethical standards and participation is required.

Such a consensus could include banning nations that invade sovereign nations, commit human rights abuses at home, or fail to ensure equality before the law – the last of which provided the ethical basis for banning South African teams over apartheid.

Strict enforcement under these terms would have required frequent exclusions in the past. As well as excluding Russia and China, a case could have been made to sanction the US and UK for their actions in Iraq; likewise Saudi Arabia for its intervention in Yemen, Turkey for its treatment of Kurds and Brazil for its treatment of indigenous populations, to name but a few.

The reality is that Fifa administrators have always considered sports to be realpolitikal, which meant no national team could be excluded for fear of diminishing the standing of the sporting competition itself.

As a result, bodies like Fifa and the IOC have largely embraced the good, the bad and the ugly.

With Russia’s suspension, sporting bodies may now find it more difficult to turn a blind eye to ethical concerns. The idea that international sport is apolitical has, I believe, finally been stripped of what little credibility it ever had. And if the notion that sports are necessarily political now gains wider acceptance, administrators will be forced to define exactly what they mean by “ethical”. DM168

Stefan Szymanski is professor of sport management at the University of Michigan.