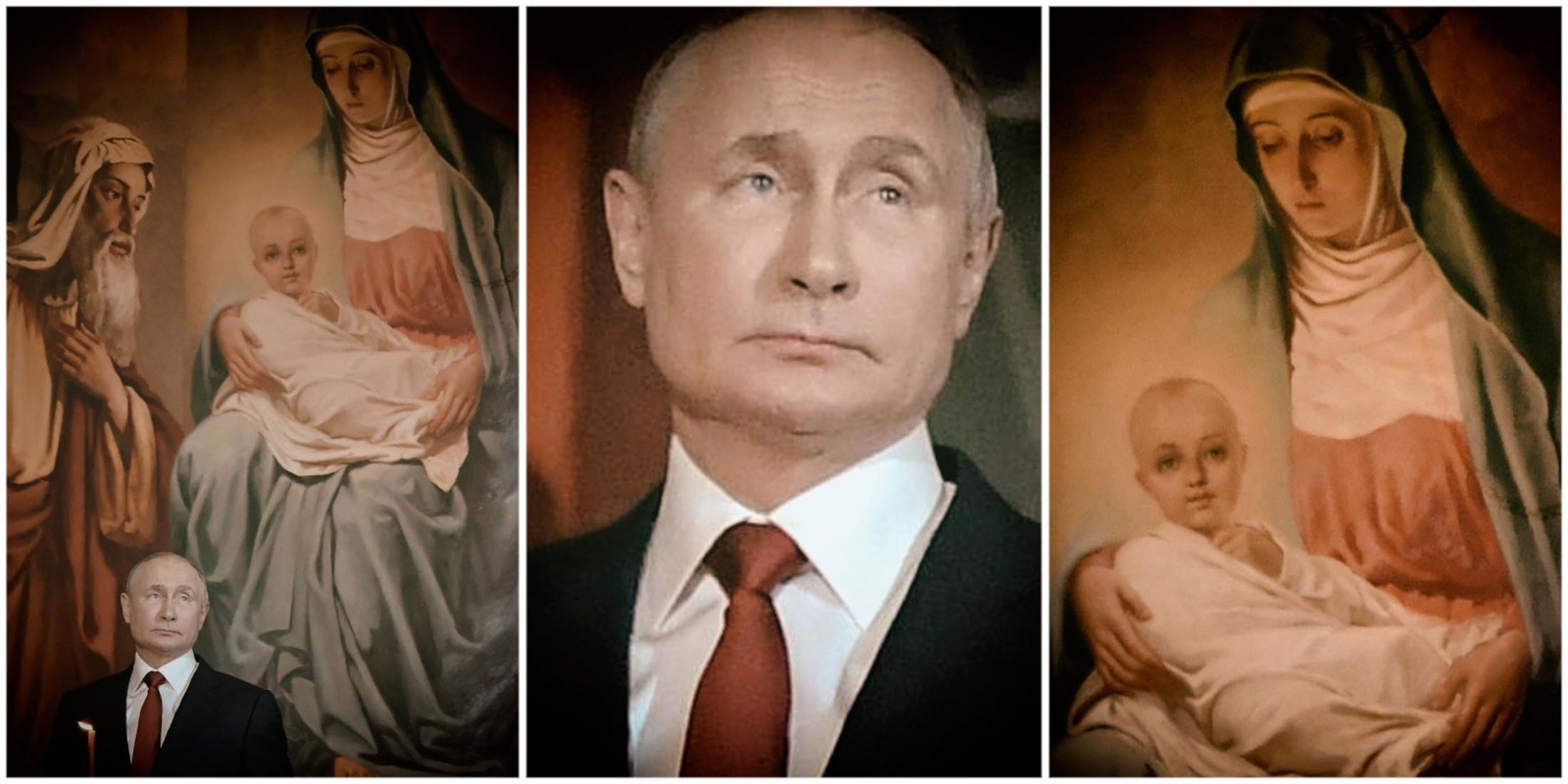 The Russian Orthodox Church has played a major role in the rise of Russian militarism and in smoothing the way for Vladimir Putin’s invasion of Ukraine.

In August 2009, Patriarch Kirill of the Russian Orthodox Church presented an icon of the Virgin Mary to the crew of a nuclear submarine at the Russian shipyard in Severodvinsk. Russia’s military needed to be strengthened by traditional Orthodox Christian values, Kirill reportedly said, “then we will have something to defend with our missiles”.

In the same year, the venerable patriarch presented the commander of Russia’s strategic missile forces with a pennant of the holy martyr Barbara, seen as the celestial guardian of Russia’s nuclear deterrent.

Such weapons, he said, could only be given to people “with a clear mind, an ardent love of the Motherland, responsible for their work before God and the people”.

It may seem surprising that a Christian leader should bless and proclaim such fondness for a nuclear arsenal, particularly one with the sinister motto “After Us, Silence”. But it speaks of Russia’s burgeoning militarism under President Putin.

According to Dutch Russia-watcher and author Marcel van Herpen, images of an Orthodox priest sprinkling holy water on an S-400 surface-to-air missile, and of the blessing of the briefcase carrying Putin’s nuclear activation code, have been flighted on national television.

After decades of repression in the Soviet Union, the church made its initial comeback by supporting Boris Yeltsin during the 1991 coup attempt. Since then Putin has restored it to the centre of national life, where it has become an ideological mainstay of his warlike presidency.

Ordinary orthodox priests have shown some independence, for example by petitioning the state on behalf of jailed democracy protesters. But Kirill is a political prelate, Cardinal Wolsey to Putin’s Henry VIII.

Three days after Russia invaded Ukraine, he attacked “the evil forces” undermining the historical unity of Ukraine and Russia – parroting Putin’s claim that Ukraine has no right to independent existence.

In a public statement, he bowed to the Draconian government ban on the use of the term “invasion” or “attack” to describe the Ukrainian war, talking only of “current events” and avoiding all mention of the Russian onslaught.

Earlier, he helped lay the ideological groundwork for the invasion, paying a 10-day visit to separatist eastern Ukraine, where he spoke repeatedly about the common destiny and heritage of the two states.

Kirill also waged a furious struggle against the establishment of a Ukrainian Orthodox Church no longer tied to Moscow’s apron strings, and immediately cut contacts with the Ecumenical Patriarchate of Istanbul for recognising it.

His counterpart in the Orthodox Church Outside Russia, Metropolitan Hilarion – based in the United States but subject to Moscow – took an even more servile line on the war, calling on his followers to “close their hearts to the [anti-war] passions” ignited by the US media.

In a country where up to three quarters of the citizens count themselves Orthodox Christians, Putin’s partnership with the church is partly about securing his power and legitimacy.

But that is not all. He himself is a Christian nationalist who, as revealed in his autobiography First Person, wears an Orthodox baptismal cross under his shirt.

Putin is, indeed, a very wealthy man. As indicated by the Panama Papers, he appears to have used his symbiotic relationship with the “oligarchs” who divided up the Soviet economy, and a trail of front companies, to hide his offshore billions. But it is a mistake to think he is primarily driven by economic motives.

As with Adolf Hitler, his actions cannot be understood through the tired paradigm of economic class analysis, without taking account of his religious-historical-nationalist frame of reference.

Despite being a former KGB lieutenant-colonel, his perspective is rooted in pre-revolutionary Russia. Following the famous “triad” of early 19th-century Tsar Nicholas I – “autocracy, orthodoxy, nationhood” – he regards rule of the strongman as the traditional Russian way, set against what he sees as the flabby decadence of liberal democracy.

In the same way as the Decembrist uprising turned Tsar Nicholas reactionary, Putin’s turning point was the popular clamour against perceived irregularities in the 2011 elections. Since then, he has ruthlessly enforced what he calls “the vertical of power” – centralised, top-down rule – which has reduced the once-unruly Duma and the judiciary to lapdogs and introduced harsh penalties for unlicensed dissent.

After questioning the mutineers, the Tsar concluded that Western ideas about individual freedom were the contaminant; Putin has arrived at a similar diagnosis.

Treason cases have risen fivefold in Russia over the past decade amid a “spy mania”, while non-Russian NGOs engaged in political work, including human rights monitors, must register as “foreign agents”. Before the Ukraine war obliterated independent media, the country was ranked 150 of 180 countries in the World Press Freedom Index.

Putin may claim to be de-Nazifying Ukraine, but he tolerates ultrarightists in Russia who share his quasi-mystical notions. One example is the white supremacist Russian Imperial Movement, which idolises the tsarist past while allegedly offering paramilitary training to neo-Nazis from across Europe at two facilities near St Petersburg.

The Orthodox Church under Kirill has been central to his drive to reinstate “traditional values”, including official homophobia – same-sex marriage was outlawed last year – anti-feminism and advocacy of women as breeders (a familiar theme of fascist governments), a tightening of abortion law and a ban on euthanasia.

Addressing the UN’s Human Rights Council in 2008 Kirill assailed abortion, euthanasia, and “extreme feministic and homosexual attitudes”. He also called for a UN “Council for Religions”, suggesting that universal human rights should be conditioned by religious, traditional and cultural values.

According to the journal The National Interest, the UN High Commissioner for Human Rights, Navi Pillay, poured scorn on the proposal, objecting that “in no country has a single woman, man or child [demanded] the right to be tortured, summarily executed, starved or denied medical care in the name of their culture”.

For Donald Trump and America’s religious right, by contrast, Putin is admired as an authoritarian defender of Christian civilisation against secularism and other faiths, particularly Islam.

Perhaps the most extraordinary monument to the marriage of Orthodox Christianity and the Russian state and military is the Victory Church in Moscow’s Patriot Square, built by the Defence Ministry for $50-million and dedicated in June 2020.

The 95m edifice, the third-largest Orthodox church, was conceived after the occupation of Crimea. A crass glorification of military might, it was condemned by the independent publication Novaya Gazeta as a “shocking” exhibition of the cult of war and a “church of [the Roman war god] Mars, not Christ”. Private arms manufacturer Kalashnikov donated a million bricks to the project.

Weapons are reportedly exhibited at the entrance to the Victory Church, while frescoes extol the feats of Russian arms from the Middle Ages to contemporary conflicts in Georgia and Syria. “Archangels lead heavenly and earthly armies; Christ wields a sword,” reports The Conversation. “And the Holy Mother, depicted as the Motherland, lends support.” DM

Drew Forrest is the former political editor of Business Day and the Mail & Guardian.