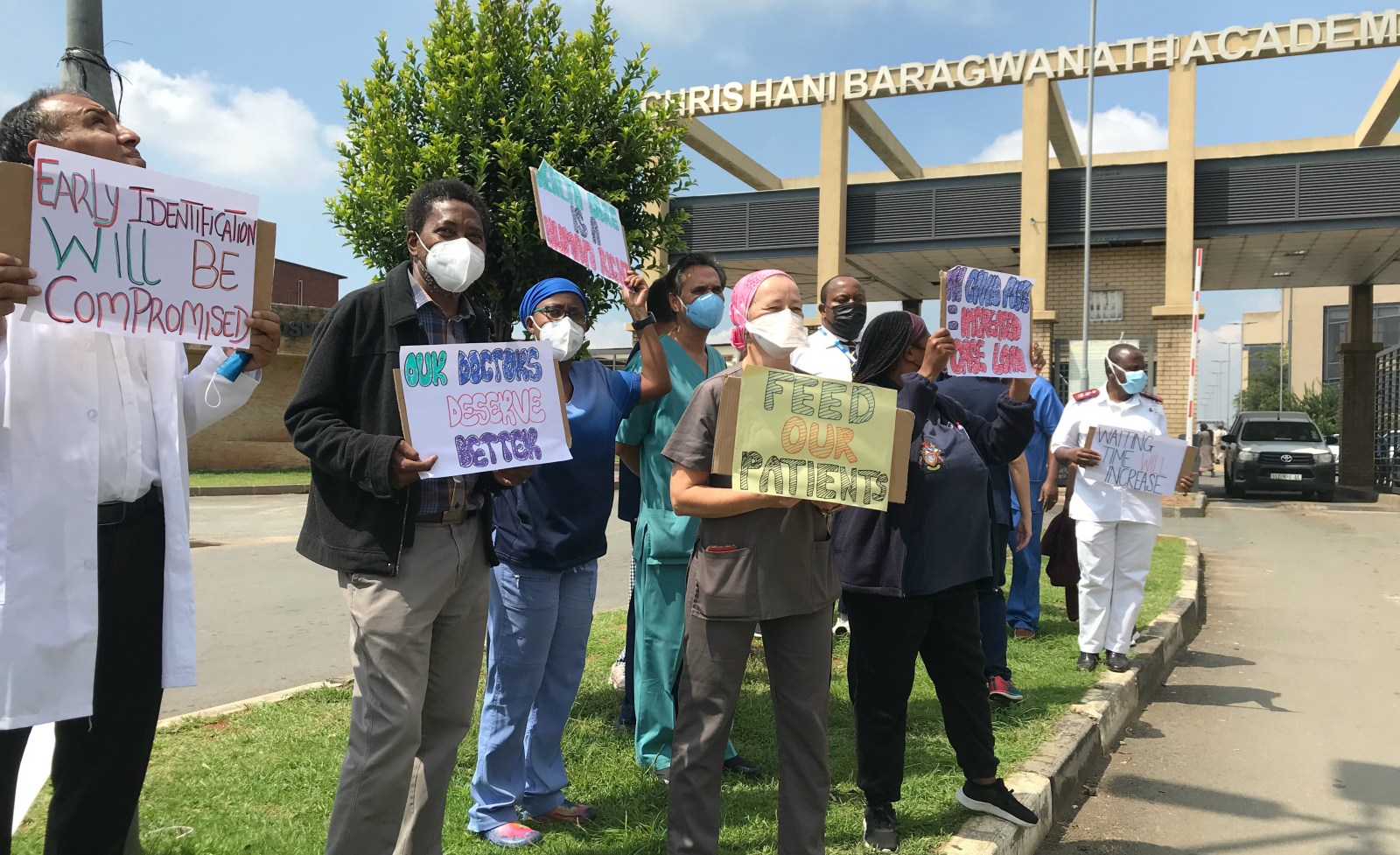 Staff at the largest hospital in Africa say that the facility is under intolerable strain owing to an increase in patients from Charlotte Maxeke Johannesburg Academic Hospital and Gauteng health department's non-payment to suppliers.

Doctors and other health workers picketed outside the Chris Hani Baragwanath Academic Hospital in Soweto on Thursday, calling on the provincial department of health not to dismiss more than 800 staff members recruited during the Covid pandemic.

“This is a health crisis of another dimension,” said Professor Mmampapatla Ramokgopa, head of orthopaedic surgery.

The group of about 50 was joined by about 100 members of the National Union of Public Service and Allied Workers (Nupsaw), who were picketing against the scrapping of their contracts. They were employed at Chris Hani Baragwanath and other hospitals as part of the Extended Public Works Programme.

In a statement released on Wednesday, the Chris Hani Baragwanath Medical Advisory Committee (MAC) said ending the posts would put a strain on an already under-staffed hospital. They said the increase in patients at the hospital due to Covid had been compounded by the addition of patients from Charlotte Maxeke Johannesburg Academic Hospital, following a fire that broke out there last year. The posts include health workers and administrative staff.

“These posts have helped us survive, and cutting them will impact health services,” said Professor Martin Smith, clinical head of surgery at Chris Hani Baragwanath.

The hospital is the largest in the southern hemisphere, receiving patients from across the country and beyond South Africa’s borders. A failure to “deal with the crisis” at the hospital would “sink” the province’s health sector, said Ramokgopa.

The provincial department of health has also failed to pay contractors This has affected waste management and the feeding of patients at the hospital, prompting medical staff and members of the public to bring food for patients.

Earlier on Thursday the Gauteng Department of Health said the hospital had not run out of food and a bread shortage had been resolved. But one doctor said the bread contract had lapsed. “So, [we are] not sure when bread and milk will start being delivered”. The doctor said suppliers of medical equipment who had also not been paid were “refusing to come and service or repair equipment”.

One supplier of bread said: “The people responsible for procurement at the Gauteng Department of Health have not paid us for four months. After begging and pleading with them to pay us, we had no option but to stop supplying bread to the hospitals.”

He said he was owed more than R1.5-million and had stopped supplying hospitals with bread on 16 February. “We have received calls from concerned hospital staff asking us to deliver bread but the government has put us in a difficult position. For four months we had to borrow money to pay bakeries because we were not receiving a big part of our income. We are not at fault here,” the supplier said.

He said, though the provincial health department said suppliers had been paid, the money was not reflected in their account. Following numerous calls from Chris Hani Baragwanath, the supplier said they had delivered bread, bought from their own pockets, to the hospital.

“Something desperately needs to be done to save healthcare in the province,” said Smith. He said hospitals functioned because of “the efforts of dedicated health professionals” but more must be done by the government to address the “crises” in the sector.

“While they’re saying Charlotte Maxeke’s emergency department is going to open, they are not opening all the beds, so the hospital will not be functioning at full capacity. Bara is going to continue to carry this load, as is Helen Joseph too. We have been carrying this load for almost a year with no additional budget allocations,” said Smith.

“Last week we had 165 patients coming through the level one resuscitation room. I don’t remember when last we had that number of patients. We are used to seeing about 100 a week, which is still a big number, but having to manage 165 patients with the infrastructure constraints that we are facing is not acceptable,” he said.

In a statement on Thursday, the provincial department of health said it would not be able to renew all the contracts for the Covid posts “due to budgetary constraints”. The department said over 8,000 posts had been created to assist health facilities across the province when Covid started. But budget allocations did not allow for the retention of all the posts, the department said. DM