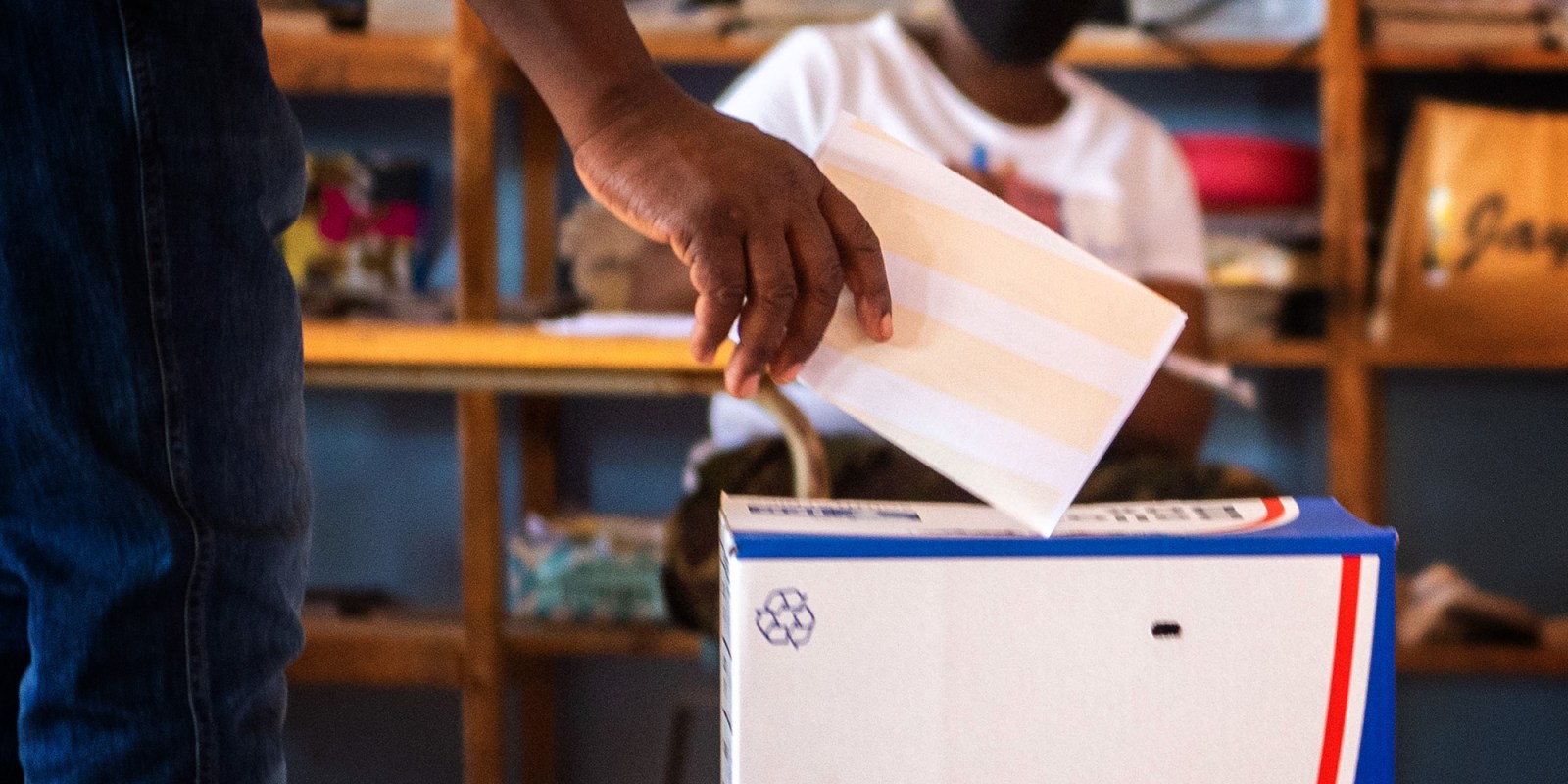 From Tafelkop in Limpopo, Ngwelezane in KwaZulu-Natal to Mpumalanga and elsewhere, the governing ANC is rolling out a campaign to support the Electoral Amendment Bill — the technicist changes to accommodate independents in national and provincial polls rather than wholesale electoral reform.

That changing the electoral laws for independents to contest nationally and in each province would be caught up in politics emerged right from the start. And significant delays have left Parliament requesting another three months, Daily Maverick is reliably informed, from the Constitutional Court to do its job.

Now civil society has raised concern over the “hurried nature” of the public hearings currently under way and also their narrow focus.

The parliamentary home affairs committee has been called to “urgently review — its nationwide public hearings to ensure compliance with its constitutional responsibilities,” according to a letter to the home affairs committee chairperson, Mosa Chabane, from the Council for the Advancement of the South African Constitution (Casac), supported by the New Nation Movement, the South African Council of Churches and The 70s Group of Struggle activists.

“…[W]e do not believe that the public have been adequately notified of these hearings, and nor have they been given sufficient time and information to make meaningful submissions,” wrote Casac Executive Secretary Lawson Naidoo on 7 March in a letter seen by Daily Maverick.

“We believe that the portfolio committee is failing in its duty to ensure meaningful public participation in the legislative processes of the National Assembly. Legislation passed as a result of such a flawed process will be ripe for a constitutional challenge.”

It’s the latest twist alongside the politics and time pressure in this 20-months-long saga.

In June 2020 the Constitutional Court gave Parliament two years — until June 2022 — to fix the electoral legislation. While Home Affairs Minister Aaron Motsoaledi initially indicated to MPs an appreciation of the time pressures, various machinations meant a ministerial advisory committee was established only in February 2021.

It was Option One that held sway in the governing ANC National Executive Committee by mid-September 2021, according to Business Day. And it was this minority, or minimalist, option that formed the basis of the draft electoral amendment legislation that was eventually tabled in Parliament in the last days of November 2021.

Yet, other possibilities always existed. As far back as early 2o21, Cope leader Mosiuoa Lekota submitted a private member’s bill that proposed a mix of constituencies and PR votes.

After Motsoaledi tabled the draft law and ahead of the public hearings, the home affairs committee decided the private member’s bill was “unsuitable” because, among other reasons, it “proposes broad, wide-ranging and substantive changes that could therefore not be passed and implemented by the constitutionally set provincial and national elections in 2024”, according to the committee’s official statement in late February.

And so when in the public hearings speakers referred to “Option One”, it’s a clear indication of the ANC’s unfolding campaign for these Electoral Amendment Bill public hearings.

Not that that has been in any doubt, as speakers identified themselves by name, ward and ANC region, rather than in the municipal area, wearing ANC colours, ANC T-shirts or accoutrements like marshals’ bibs.

Further clues emerge as the same phrasing crops up in the comments, be they from ordinary ANC branch members, regional officials, the women’s league or task teams. That’s regardless of geography or whether notes are on plain paper, phones, tablets or documents in the ANC’s colours of black type on yellow paper with a green header featuring its logo.

It’s about how “the factions” elected to Parliament would make it “difficult to form a government”, the “ballot book” necessary to accommodate independents “makes it difficult for voters”, and how much more money would be needed for the Electoral Commission of South Africa.

Proclaiming support for Option One, ANC speakers also speak of supporting proportional representation as “best for diversity” in South Africa.

Crucially, the ANC submissions call that independents must, before being allowed to contest, show support of at least a third of the numbers needed for a seat — that’s effectively anything from 13,300 to 20,000 signatures, depending on the province.

This, like the comments about the difficulties of “a bloated ballot”, as one ANC speaker put it at Lenyenye Community Hall in Limpopo, are signals of ANC concerns of further erosion of its electoral support at the next general elections, in 2024.

In the November 2021 local government elections, ANC support nationally dropped to 45.5%, down from the 53.9% obtained in the 2016 municipal polls that cost the party South Africa’s economic heartland, Johannesburg, the administrative capital of Tshwane and the Eastern Cape economic hub of Gqeberha.

Monday’s ANC media statement speaks to that: “Potentially, we can have many small parties and independents occupying key seats that hold a balance of power in a legislature or Parliament where no party gets over 50%. This is happening at municipal level and often leads to unstable and temporary coalitions…”

Much is at stake for the ANC. And this helps explain an unfolding campaign at the countrywide public hearings on the electoral amendment draft law.

If and when the odd DA member made a submission — a couple were councillors — it was a disconnect, with both support for the bill and a disagreeing call for wholesale electoral reform.

The EFF stayed on message: independents must be welcomed to contest at national and provincial level as they do in municipalities — and they must be supported so they can contest.

At Tuesday’s Pietermaritzburg town hall session, the Msunduzi Association of Residents, Ratepayers and Civics said the bill “is just cosmetic to introduce ‘independent’. What is actually required is an actual change in the electoral system.”

On Monday, a grey-bearded elderly man, who introduced himself as “Mr Myeni”, expressed disappointment about the empty chairs at the community hall of Ngwelezane, near Richards Bay. He only heard of the meeting as he was travelling to the library.

“Documents, we just received it today. We were supposed to receive it a long time ago so we can go through it to know exactly what the meeting is about,” he said, according to the translation from isiZulu.

“We don’t know what it is about… Did you tell the mayors, the councillors that you were going to have a meeting? I don’t see this meeting being a success…”

On Wednesday, the Ladysmith public hearings, from introduction to concluding thanks, lasted 54 minutes.

In Tafelkop, Limpopo, it took a little longer, but after one hour and just over 40 minutes later — a DA councillor stood out from among the ANC speakers — that public hearing was also over.

To date, these public hearings have been curious, and not only for the dominance of political party members and officials.

In a highly unusual move, the national anthem starts the public hearings of the MPs visiting inland provinces like Limpopo and Mpumalanga.

Aside from the pomp and ceremony at the State of the Nation Address, the national anthem is not part of parliamentary business — neither at  committee meetings nor sittings of the House.

Those plenaries in the House are opened with a moment of silent prayer or meditation. That was the approach taken at the public hearings of the coastal provinces. Again, it’s unusual, as is that with one exception the official statements on these public consultations do not indicate their heavily party political nature, but talk of “residents” and “participants”.

At a time when public trust in politicians and political parties is at a low, according to various surveys, this Electoral Amendment Bill with its narrow technicist proposals swats away the possibility of wholesale electoral reform — including constituencies where MPs are directly accountable to communities.

While law-drafting often is a political decision, law-making must uphold constitutional responsibilities like proper public consultations.

Much is at stake. DM