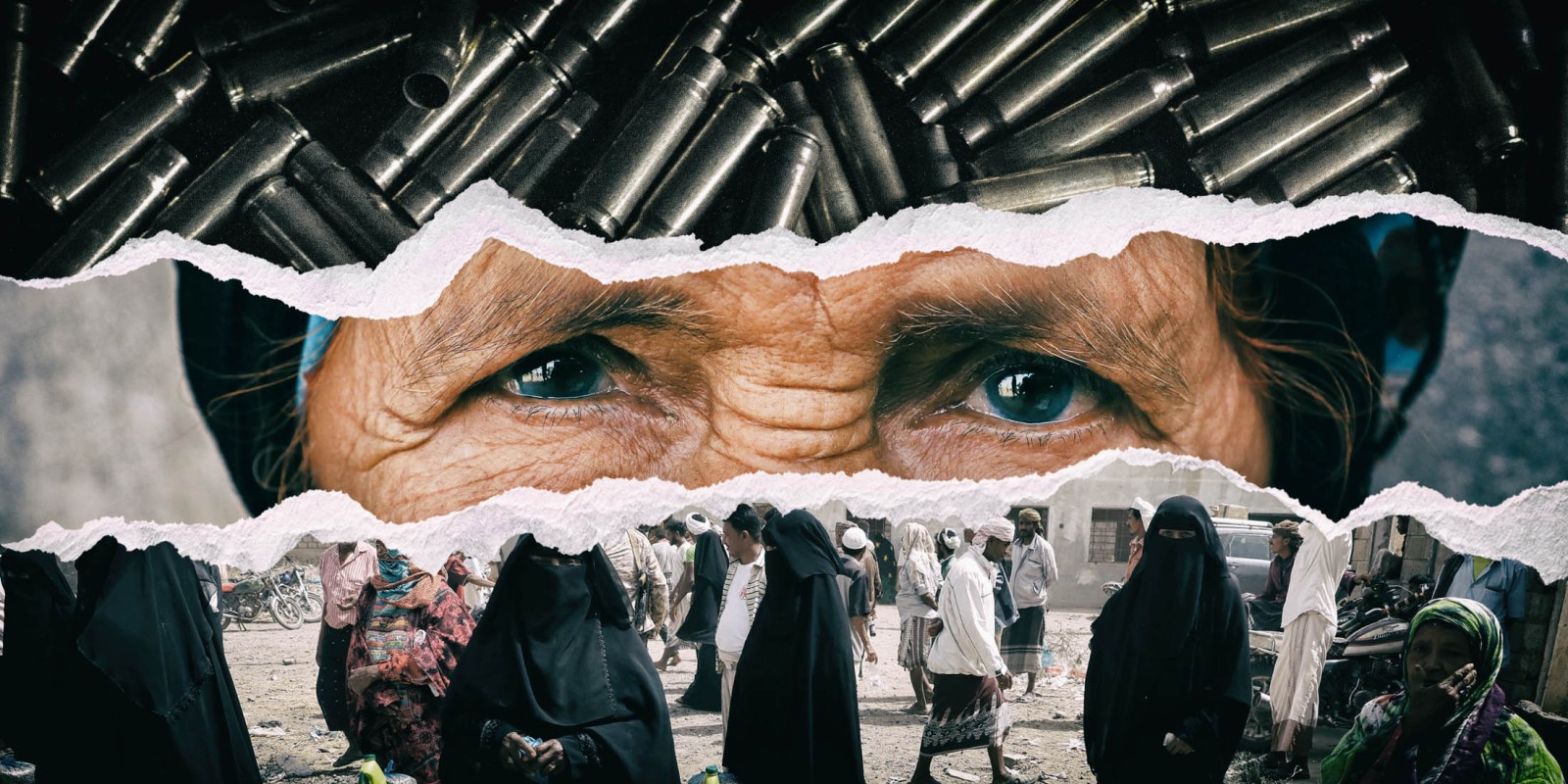 From top: Unsplash / Mykola Makhlai. People receive food aid at al-Jarahi town in the port province of Hodeidah, Yemen, on 10 February 2022. The United Nations reported that the humanitarian response plan for Yemen for 2021 received only 58% of the funding requirements, with a deficit of about $1.6-billion, as about 24 million people, out of the war-ridden country's population of 30 million, were urgently in need of protection and humanitarian aid, including more than five million on the brink of famine. (Photo: EPA-EFE / Yahya Arhab) | A Yemeni woman waits for emergency food aid in al-Jarahi town, Yemen on 10 February 2022. (Photo: EPA-EFE / Yahya Arhab)

The timing of South Africa’s refusal to condemn the Russian invasion of Ukraine, comes precisely as it is reopening a flood of weapons to Saudi Arabia and the UAE, and has again brought the hypocrisy of the country’s foreign policy into sharp relief.

The South African government says all wars matter and deserve equal condemnation, but it doesn’t mind profiting from them. It has long been obvious that South Africa has abandoned human rights as a guiding part of its foreign policy; the country’s generally appalling voting record at the United Nations is testament to this. But the timing of its refusal to condemn the Russian invasion of Ukraine, coming precisely as it is reopening a flood of weapons to Saudi Arabia and the UAE, has again brought the hypocrisy of the country’s foreign policy into sharp relief.

Last week, on Wednesday, 2 March 2022, South Africa abstained in a vote on a UN resolution condemning Russia’s invasion of Ukraine. It came after weeks of walking back an initial condemnation of the invasion made by Minister of International Relations Naledi Pandor.

Like many decisions made by our government, there has not been a single coherent rationale presented for its refusal to condemn the invasion. But one stated reason is that South Africa wants the world to condemn all wars equally – Department of International Relations and Cooperation spokesperson and deputy director-general Clayson Monyela defended the government’s position in a tweet on 3 March, saying: “Let’s not forget the People of Palestine, Yemen, Syria, Libya, Somalia.” He even added #whataboutism to his tweet.

The reality is that South Africa’s government has consistently failed to act in the interests of the civilians in these countries that they now trot out as an excuse to defend Russia. Nowhere is this more obvious than the case of Yemen.

In fact, on 3 March – the day after the UN vote and at the same time Monyela was chastising European ambassadors on Twitter for selective condemnation of global conflicts – Dr Moses Khanyile of the National Defence Industry Council proudly told Parliament that weapons sales to Saudi Arabia, the United Arab Emirates (UAE), Turkey and Oman worth R5.5-billion had been approved by the National Conventional Arms Control Committee (NCACC). He added that up to R21-billion in sales to these countries could soon be “unlocked” by the NCACC.

This is the continuation of a strategy that sees Saudi Arabia and the UAE as key sources of profit for South Africa’s arms companies.

Since the civil war started in Yemen in 2014, Saudi Arabia and the UAE have accounted for anything from a quarter to nearly half of all South Africa’s annual weapons exports. But these two states are also key external participants in Yemen’s regionalised civil war and have been regularly implicated in the commission of war crimes in Yemen, including deliberately targeting civilians with unlawful airstrikes, and the use of starvation, torture and destruction of civilian infrastructure as weapons in the conflict.

In March 2021, Open Secrets released a report, Profiting from Misery, that showed evidence that South African weapons systems exported to the UAE and Saudi Arabia had been used in Yemen.

In January 2022, just six weeks before the NCACC decided to approve weapons shipments to these states, the United Nations humanitarian coordinator for Yemen warned that January would be a “record-shattering month for civilian casualties in Yemen”.

According to data from the Yemen Data Project, attacks on civilians have been increasing. An airstrike by Saudi Arabian forces on 21 January killed 91 civilians and injured 226. This was the worst attack on civilians in Yemen in three years, but is part of what local Yemeni activists are describing as a surge in air raids and civilian casualties. In 2021, more than 20 million Yemeni civilians required humanitarian aid, and 16 million could not access enough food.

By continuing to supply countries like the UAE and Saudi Arabia with weapons at this time, South Africa joins, albeit not on the same scale, countries like the US, the UK, France and other nations in Europe selling weapons to the Middle East and making a mint from the war in Yemen. It’s poor company to be in.

The weapons trade provides a lens through which these nations’ hypocrisy is obvious. For instance, the UK is outraged by Russia’s invasion of Ukraine as a violation of international law, yet it props up the Saudi Arabian air force, sells them their jet fighters and bombs, and Royal Air Force officials sit in the control rooms where Yemeni targets are chosen.

Despite Yemen being the site of the largest humanitarian crisis in the world, it receives scant attention. It certainly cannot match the 24-hour coverage of the day-to-day progress of the war in Ukraine. At the heart of this is a double standard that has been laid bare by so much of the reporting on the war in Ukraine; that war and the resulting human cost is tragic in “civilised” Europe when it affects white people, while it is dismissed as the norm in places like Africa and the Middle East.

The South African government should call out this rank hypocrisy. It should also condemn Russia’s illegal invasion of Ukraine and the humanitarian devastation that will follow.

Yet, South Africa’s own track record undermines any of its efforts to call attention to the many overlooked conflicts around the world. But if it insists on justifying its silence on Russia’s conduct by urging the world not to forget the people of Yemen, it should stop approving the sale of weapons to states that have contributed to the devastation of that country and its people. DM

Michael Marchant is Head of Investigations at Open Secrets.