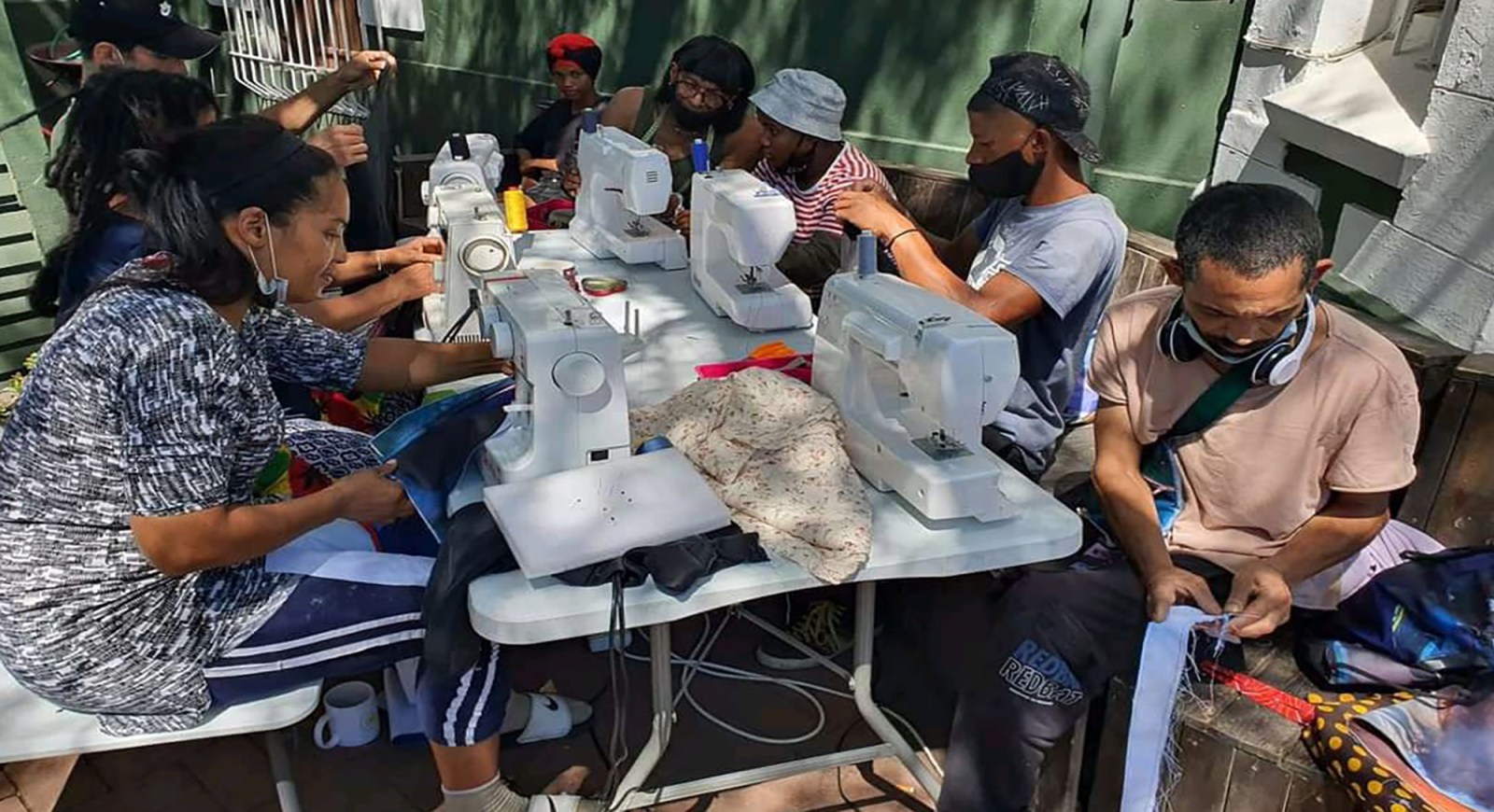 Residents at the Rainbow House in Observatory participate in a skills-development sewing project. (Photo: Supplied)

As the City of Cape Town focuses on more funding for law enforcement, it is neglecting the key elements of a humane and dignified response to the crisis faced by the 14,000 people who live on the city’s streets.

It has been six months since a street-based community living in District Six was evicted and dispossessed of their belongings. Despite being successful in court, the City of Cape Town has not returned the community’s possessions as ordered by the court.

Last week we learnt that the community’s health had severely deteriorated since having their homes and belongings confiscated in September 2021. It was only after we appealed to the city’s attorneys on compassionate and health grounds that they finally agreed to return their tents.

While members of the community gathered in anticipation, Law Enforcement officers lined up what they said were 13 people’s belongings, in trash bags. It was a heartbreaking moment for the families, who had been without their precious items for six months, to learn that the debris bundled in the garbage bags and treated as such by Law Enforcement was not their belongings.

Thando Sokrowa, one of the community members, asked a Law Enforcement official: “Even if these were our things, if you have a heart, how can you return such things to us?”

This deep disappointment followed their “victory” in the high court where the court ordered the return of their possessions — which includes cellphones, mattresses and identification documents — or monetary compensation in the alternative. The matter has since been appealed by the city. To the people whose homes and hard-earned possessions were unjustly taken from them, suffering this indignity was rubbing salt in their wounds.

While we continue to represent the street-based community in court proceedings, the reality is that the courts will not solve the phenomenon of homelessness. At best, the courts will demonstrate that Law Enforcement works outside the parameters of the law and certainly does not operate in the interests of all people.

Is this the kind of city we want to live in? One that harasses the defenceless and impounds their belongings under a by-law relating to “goods and animals”, as if street-based people are not human?

We recognise that the number of people living on the street has risen exponentially over the past two years. Covid-19 has decimated many people’s incomes, and many households with nowhere to turn have been forced on to the street.

Many people living on the street walk into our offices and explain the circumstances that led them to the street. More often than not these circumstances relate to the loss of income and, subsequently, the loss of their homes. In these harsh times there is no humanity in criminalising street-based people and robbing them of their dignity.

The question we are always asked is: what is the solution for managing at least 14,000 people living on the streets of Cape Town? We offer some thoughts on how things could be done differently.

First and foremost, over the past five years we have seen a steady reduction in the city’s investment in social development and housing while the public safety budget has remained the leading priority in the city’s expenditure.

There is an international precedent of social development programmes and investment in proper homes, coupled with economic growth, having a significant impact on the factors that lead to homelessness. Instead, in Cape Town there has been a steep investment in the Law Enforcement division, often with no clear oversight systems. Interventions that cause a reversion to a police state are highly dangerous given the history of South Africa, and any identified need for an increase in Law Enforcement needs to be balanced with a people-centred approach.

Second, the city must abandon its controversial “broken windows” approach to policing. This theory, emanating from New York City, assumes that policing minor infractions — like begging — will help prevent more serious crimes from occurring. There are many criticisms of this theory, including that it largely affects poor and black communities and that it misinterprets the relationship between disorder and crime by drawing a causal link between the two. A 2015 meta-analysis of 30 studies revealed that such “disorder” in a neighbourhood does not directly cause its residents to commit more crime.

Third, the solution to homelessness is not just about financial resources. It is also about providing safe, flexible and varied housing options to people living on the street. Individuals facing homelessness have different sets of circumstances that require different levels of intervention.

The city claims that there are numerous beds in shelters and Safe Spaces that street-based people are not taking up. The reality is that what is on offer does not meet people’s needs, as the rules and regulations that guide such shelters are problematic and, in some cases, unconstitutional. As Judge Rosheni Allie stated in the District Six community’s case, namely Davids and 45 Others v City of Cape Town:

“[T]here is no doubt that [the] applicants do not choose to live in a public parking area… out of malice or wilfulness, but out of desperation and need so that they can live for the whole day and night with members of their household in one structure and not merely overnight as they would in a shelter or Safe Space.”

Instead of herding desperate people into a shelter system that fails to offer the sanctity and stability of a home, the city must consider other solutions in addition to short-term night shelters. The state owns a considerable amount of land and vacant buildings, so options to retrofit these and turn them into suitable housing for street-based communities should be explored in earnest.

Fourth, any intervention for street-based people must be driven by investment in street-based formations, like the recently established Homeless Action Committee, and civil society organisations that have the capability to address the issues faced by the street-based population.

There are some excellent examples in Observatory, namely, the Rehoming Collective, which runs two homes based on “Housing First” principles, at Rainbow House and at the YMCA. Housing First is a recovery-oriented approach that centres on first moving people experiencing homelessness into independent and permanent housing where additional support and services are provided as needed.

The Rehoming Collective also provides access to skills such as sewing and small business development. For instance, since moving to Rainbow House, two individuals have established a car wash and a barbershop on-site. Various other transitional housing facilities run by Streetscapes in Walmer Estate and Kuils River also give credible ideas for providing suitable alternative accommodation for people on the street.

Finally, as many ratepayer associations make calls for stronger punitive measures, we need to shift the racist, classist, privileged point of view that is being revealed. Instead of investing in private security to surveil, harass and illegally evict street-based people, civil conflict resolution like meaningful engagement or mediation between housed and unhoused residents is an alternative model to explore to resolve issues. Other options include investing in care institutions such as counselling and rehabilitation centres that can provide long-term solutions for needs.

The war waged against street-based people and the poor by Law Enforcement will be perpetuated until there is a shift in behaviour — one that restores dignity and provides credible solutions for the future. It requires us to collectively imagine alternative, sustainable interventions and move away from the blunt instrument of criminalisation. DM

Adi Kumar is the executive director at Ndifuna Ukwazi and Daniellé Louw is an attorney at Ndifuna Ukwazi, an activist organisation and law centre that advocates for access to well-located land and affordable housing for poor and working-class families, communities and social movements.