Why did Russia invade Ukraine? FAQs about the conflict...

Why did Russia invade Ukraine? FAQs about the conflict that has shocked the world 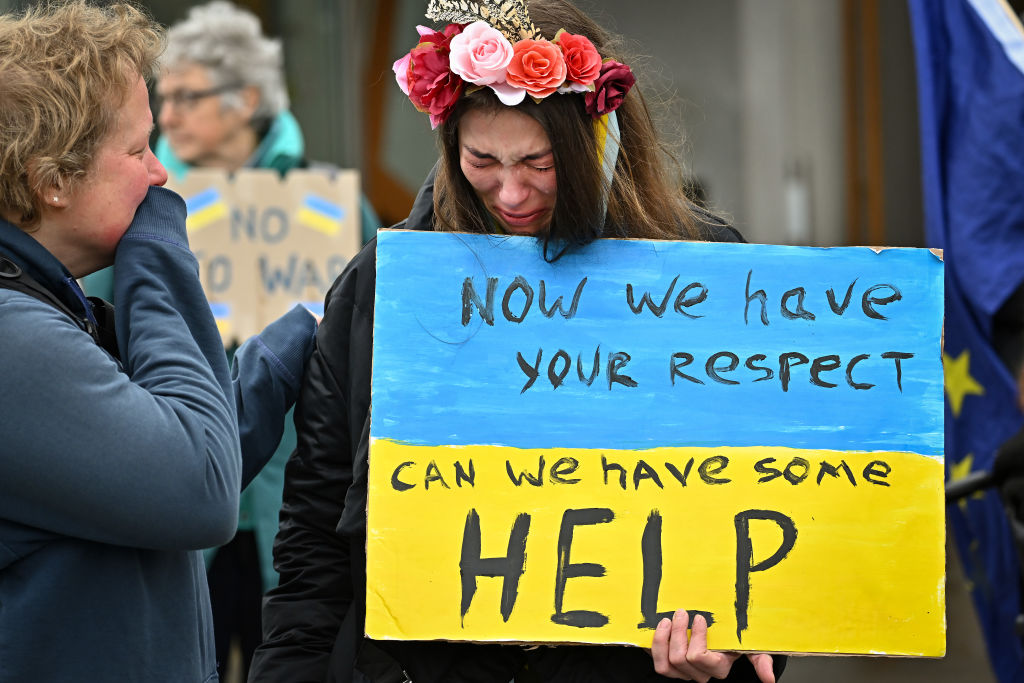 A Ukrainian woman reacts as members of the public show their support for Ukraine outside the Scottish Parliament on March 3, 2022 in Edinburgh, Scotland. (Photo by Jeff J Mitchell/Getty Images)

The invasion of Ukraine by Russia has put the world on edge. The military move by Russian President Vladimir Putin has left many people looking for information on how and why the conflict started. Here are answers to some key questions.

Why did Russia invade Ukraine?

Having a prosperous, modern, independent and democratic European state bordering Russia was perceived as posing a threat to Russia’s autocratic regime. If Ukrainians succeeded in fully reforming their country along lines of other western democracies, it would set a bad precedent for former Soviet countries and serve as an example for Russians who want a more democratic country.

Putin also perceives that western democracies are in a weak and particularly vulnerable state — thanks in part due to Russian efforts to create discord and sow divisions in Europe and North America abroad — making this an opportune time to launch a major military adventure.

Is this a war?

Absolutely, both in the traditional and modern sense. It involves a military assault with air, sea and land forces being deployed in combination with sophisticated cyber attacks and relentless propaganda disseminated by conventional as well as social media.

The invasion of Ukraine is just an expansion and escalation of the earlier hybrid war.

It is a war that actually began after Ukraine’s Revolution of Dignity, also known as Euromaidan, in 2013-14. That’s when widespread protests by citizens who wanted a closer relationship with Europe led to the ouster of then-president Viktor Yanukovych, who had asked Russia for help to put down the protests.

Russia responded by illegally annexing Crimea, a section of Ukraine that touches the Russian border on the Black Sea. Russia also supplied military personnel, mercenaries and other resources in support of a small but militant minority of pro-Russian separatists in the largely Russian-speaking cities of Donetsk and Luhansk in Ukraine’s east. More than 14,000 Ukrainians have died since 2014 in fighting in the Donbas.

Is the invasion tied to Russia’s annexation of Crimea?

Crimea was the only part of Ukraine to have a slight majority of Russians at the time of the breakup of the Soviet Union. Nevertheless, 55 per cent of the peninsula’s population voted for Ukraine’s independence.

Putin mistakenly believed that by successfully annexing Crimea by stealth and orchestrating an armed uprising in the Donbas, he would shake Ukrainian unity and prompt the southern and eastern provinces of the country to break away from the Kyiv government and seek to join the Russian Federation as a new territory to be known as Novorossiya, or “New Russia.”

That failed to happen, so the current invasion is an attempt to achieve a similar end using force on a massive scale.

Is this a renewal of the Cold War?

The term “Cold War” refers to a period after the Second World War when the Soviet Union and Western democracies were aligned against each other in what was essentially an ideological battle between capitalism and communism.

At the height of the Cold War, the United States and the Soviet Union — the two great military powers in the world — engaged in a titanic ideological struggle by means of subversion, propaganda campaigns and proxy wars in the developing world.

Putin and his inner circle are very much products of the Cold War and consider the breakup of the Soviet Union and its Communist Party dictatorship a humiliation. In that sense, the current conflict is a renewal or even a continuation of the Cold War because its goal is to restore Russia as America’s greatest military rival.

Putin is seeking to turn back the clock to a time when the Soviet Union and the West had defined and relatively stable “spheres of influence” in Europe. During that time, there was a military balance achieved through parity in nuclear arsenals. This was also known as the “mutually assured destruction” policy, which suggested that neither the United States or the Soviet Union would go to war because the ensuing nuclear battle would be devastating for both countries and the rest of the world.

How ‘Russian’ is Ukraine?

According to the last full census taken in 2001, 17.3 per cent of the citizens of independent Ukraine identified themselves as ethnic Russians. This was a decline of almost five percentage points from 1989, reflecting in part an out-migration of Russians after the breakup of the Soviet Union.

There was also a change of identification among Ukrainians who had claimed to be ethnically Russian in the late Soviet period when it was socially and economically advantageous to do so, but reverted to their Ukrainian identity when Ukraine became independent.

Since 2001, the numerical influence of ethnic Russians in Ukraine diminished even further, as a result of the annexation of Crimea and the creation of the two separatist “republics” in the Donbas region of eastern Ukraine. Significantly, even in the Donbas, where ethnic Russians form a substantial minority, they do not outnumber ethnic Ukrainians.

Somewhat confusing the situation is the fact that most Ukrainians are able to speak or easily understand both Russian and Ukrainian. For many Ukrainians, especially in the south and eastern regions of the country, Russian is the first language.

Russian is widely used throughout large parts of Ukraine and it is not unusual for people to easily and even unconsciously move back and forth between languages. Nor is it unusual that many Russian speakers are fervent Ukrainian patriots, just as significant numbers of ethnic Russians are fiercely loyal citizens of Ukraine.

Russians and Russian speakers are not persecuted or discriminated against in Ukraine, even as the Ukrainian state — and increasingly Ukrainian citizens themselves — work to encourage fluency and the use of Ukrainian in daily life after centuries of linguistic and cultural Russification.

Finally, a large number of Ukrainians have ties to Russians and Russia, through mixed marriages, work, professional relations and longstanding friendships.

Sadly, many of these relations have been strained in recent years due to the Putin government’s hostility towards Ukraine and the Russian media’s relentless and baseless attacks on Ukrainians. The situation has resulted in contacts being terminated for political reasons as a result of changing attitudes towards Russia as a whole.

The vast majority of Ukrainians until recently had a positive image of Russia, but a growing number now have a critical or skeptical attitude to Russia. The current conflict is certain to make things worse.

Why does Putin say Ukraine isn’t a real country?

In a televised speech days before the invasion, Putin suggested that “modern Ukraine was entirely created by Russia.”

Putin has inherited much of his world view from the Russian-chauvinist and Russocentric traditions of the former imperial and Soviet Russian regimes. His Ukrainophobic attitudes can be attributed in part to his being steeped in deeply rooted feelings of both Russian superiority and resentment towards Ukrainians who have consistently asserted their distinct identity.

Russia has for four centuries tried to fully subjugate Ukrainian lands and to subdue the Ukrainian nation by means of laws and policies designed to undermine and suppress the Ukrainian language and culture, while at the same time privileging Russians in Ukraine.

Russia has often resorted to using brutal force to prevent Ukraine from pursuing greater autonomy as well as outright independence, using invasions, ruthlessly crushing rebellions, exiling hundreds of thousands to Siberia and the Far North, starving millions in a genocidal famine, and simultaneously imprisoning and executing legions of gifted artists, intellectuals, spiritual leaders and political activists, who dared to challenge Russian dominance over the country.

As various attempts by Ukrainians to establish an independent state were thwarted by Russia and by other foreign oppressors, Putin has repeatedly sought to disparage Ukraine’s successful declaration of independence in 1991 and is determined to put an end to it. DM/ML

Jars Balan is the Director of the Canadian Institute for Ukrainian Studies, University of Alberta.