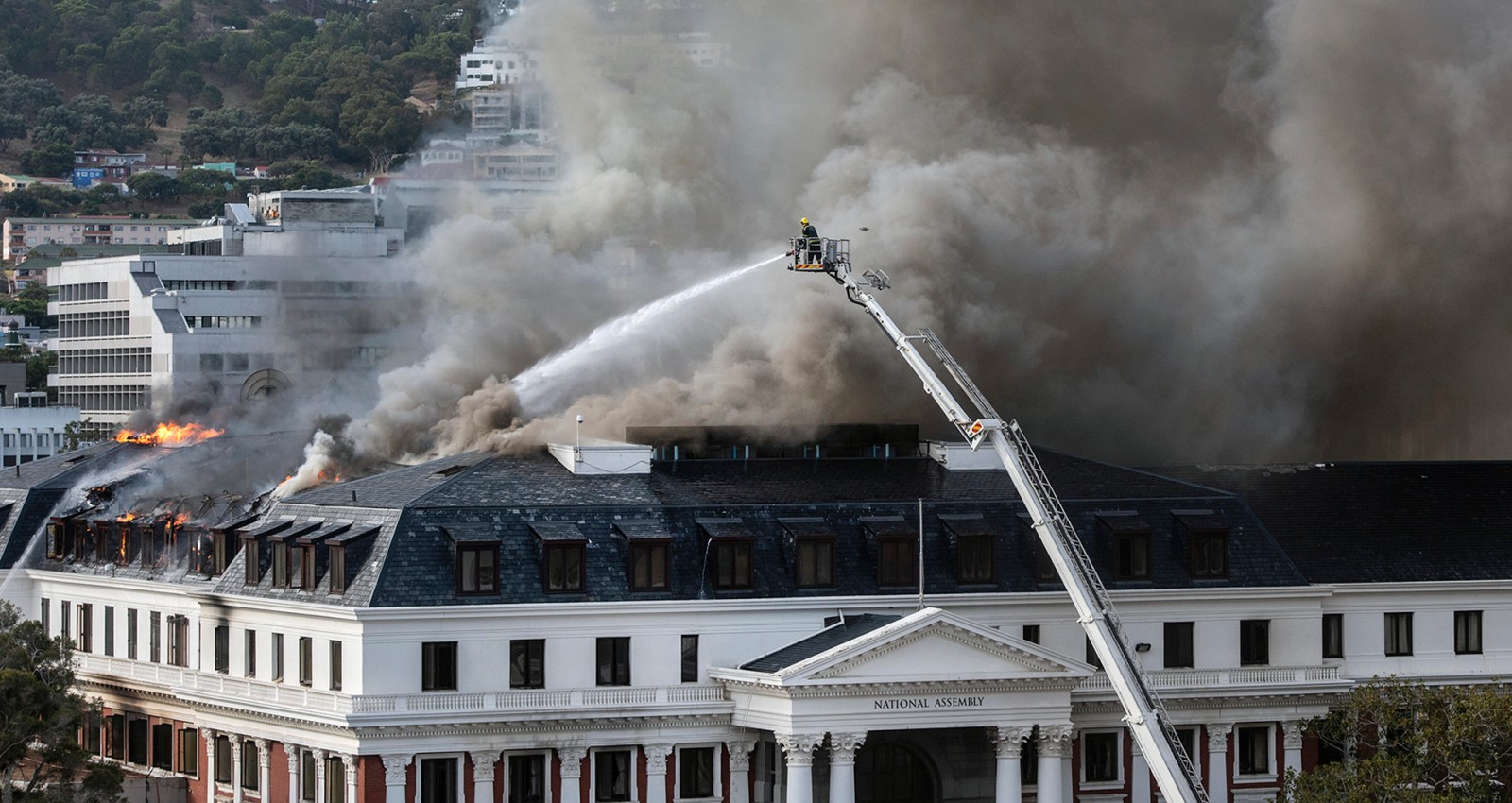 Firefighters battle a blaze on the roof of the National Assembly building in Cape Town on 3 January 2022. Fiscal policy researcher Gunnett Kaaf said the songs and slogans of the pre-1994 era condemned a Parliament that had been advancing the interests of capitalism and racism. The incoming government of 1994 was meant to serve the interests of the people — but his had not come about. (Photo: EPA-EFE / Stringer)

At a webinar on Tuesday, two activists lamented the worrying state of democracy in South Africa versus what had been promised in 1994.

Speaking at the Democracy on the Brink webinar organised by the Tshisimani Centre for Activist Education on Tuesday evening were Amadiba Crisis Committee spokesperson Nonhle Mbuthuma and fiscal policy researcher Gunnett Kaaf.

Mbuthuma said that people living in rural areas had never really experienced the impact of democracy after voting in 1994. She said that just two years after democracy, the Amadiba people (based in Xolobeni, Eastern Cape) started experiencing issues of land acquisition, driven by mining companies and the government.

The community had been “expected to move in order to open a space for so-called development”, leaving the community to ask: “Whose development?” and “Who benefits?” When the Amadiba refused to move, Mbuthuma said, they were labelled “anti-democracy” and “anti-development”.

“From the beginning, we said no to mining because we are happy with the way we live. We have land, we have water, we have shelter,” Mbuthuma said.

She said the government had promised jobs, but the community refused, saying: “Here we sustain ourselves because we produce all sorts of crops and displacing us will make our livelihoods suffer. Also, mining is short term so every development should be questioned on its [longevity.]”

Mbuthuma said her experience had been that when you question, you end up facing the wrath of the police, just as used to happen before the advent of democracy in 1994.

“So what democracy is this?” she asked.

“Democracy means the right to be consulted and public participation, not intimidation from police who are fully armed and sometimes come to people’s houses to arrest them. Our democracy was sold a long time ago.”

Mbuthuma said she and others in rural areas live on communal land governed by traditional leaders and what often happens is that the state does not consult communities on issues of land, but instead speak to chiefs individually.

“We have an experience of chiefs being bought 4x4s in exchange for land worth billions.”

Mbuthuma said that even on an international scale the issue is about invading land and pushing people off land for the enrichment of big companies and state officials.

“Let’s use the land for our own good and save the future of the next generation. This idea of privatising everything is not to the benefit of the ordinary people but to those in government.”

Priority areas like education and health were being neglected, said Mbuthuma.

Fiscal Policy’s Kaaf told the webinar that after 1994 there was a need to focus on social cohesion and building a new historic bloc for change.

He said that when SA Communist Party General Secretary Chris Hani was assassinated in 1993, South Africa faced the very real possibility of descending into civil war, but this had been averted when the president-in-waiting, Nelson Mandela, “calmed the nation” by going on SABC and promising that democracy had come while calling for an end to the bloodshed.

He said that at the time a popular slogan that was championed, particularly by Charles Nqakula, who succeeded Hani in the SACP, was “vala iparliamente yamasela, vula iparliamnete yabantu vula”(close the Parliament of thieves, open the Parliament of the people) and that it had even greater relevance now.

He said the songs and slogans of the time condemned the then Parliament that had been advancing the interests of capitalism and racism, and that the incoming government of 1994 was meant to serve the interests of the people.

“To me, democracy represents the direct involvement of people in the social management of the country… it is about emancipation, houses, decent jobs… It’s a movement,” said Kaaf.

Social transformation meant education needed to be expanded in a more meaningful way, the health system needed to be protected, the majority of people needed to have decent jobs and income and wealth had to be redistributed.

“While last year July’s violence was orchestrated, the people we saw on TV were not employed by anyone, they were hungry,” said Kaaf.

Increasing unemployment was weakening trade unions because there were fewer workers, said Kaaf. What was needed, he said, was an intersectoral bloc, similar to how people had mobilised against apartheid.