‘It’s brown, but you can drink it’ — Nelson Mandela Bay water woes continue 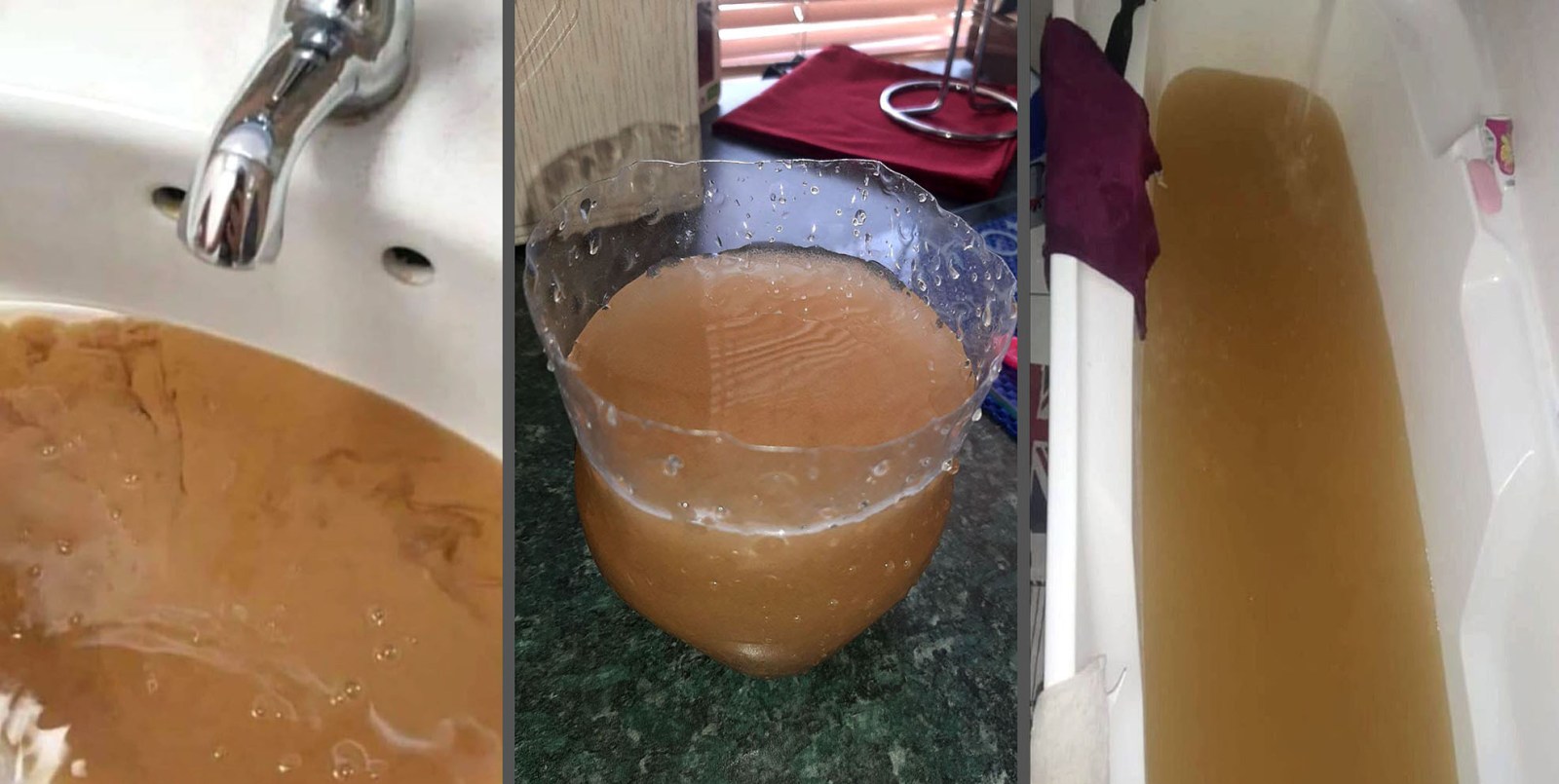 This is what Nelson Mandela Bay tap water looked like in January. (Photo: Supplied)

Nelson Mandela Bay residents complained for close to a month about brown water spewing from their taps before the municipality took action. This was despite chemical tests at water sampling points in the metro showing that the problem was flagged as early as 3 January.

From the middle of January, taps around Nelson Mandela Bay began releasing discoloured water, sometimes tinged with white, which metro officials insisted was safe to drink.

The council issued a statement at the end of January saying the water was safe and that the colour was caused by “mineral deposits” that had built up inside water infrastructure over time. It said that when flow rates changed as a result of pipe bursts or reservoirs emptying, this build-up could be dislodged, causing discolouration.

“The quality of potable water supply is regularly monitored, and all tap water has been disinfected to ensure that it is safe to drink. Should your water discolouration be of concern, we suggest that you boil it for drinking purposes,” the January statement continued.

At the time, there was a widespread water outage in Kariega, leaving residents without water for days. But three weeks earlier, chemical water tests had already shown that something was going wrong with the metro’s water supply.

The municipality has been refusing to make water test results public as a matter of course, instead advising those who seek access to apply for it in terms of the Promotion of Access to Information Act.

These chemical results are part of what Daily Maverick received after bringing a successful application for the results.

On 3 January, water taken from 13 testing points across the metro failed safety standards for colour. Water from 11 points had unacceptably high levels of aluminium, while nine samples tested positive for bromodichloromethane.

Exposure to aluminium, according to the World Health Organization’s guidelines on drinking water quality, has been linked to Alzheimer’s in a number of studies.

“On the whole, the positive relationship between aluminium in drinking water and Alzheimer’s Disease, which was demonstrated in several epidemiological studies, cannot be totally dismissed,” the WHO guidelines read.

“However, strong reservations about inferring a causal relationship are warranted in view of the failure of these studies to account for demonstrated confounding factors and for total aluminium intake from all sources.

“Taken together, the relative risks for [Alzheimer’s] from exposure to aluminium in drinking water above 100 µg/litre, as determined in these studies, are low (less than 2.0). But, because the risk estimates are imprecise for a variety of methodological reasons, a population attributable risk cannot be calculated with precision.

“Such imprecise predictions may, however, be useful in making decisions about the need to control exposure to aluminium in the general population.”

At one testing point in Kariega (formerly Uitenhage), iron levels in the water were too high and chloride levels were also high at the Schoenmakerskop Retirement Village.

On 10 January, several more samples, including those taken at the metro’s Dawid Stuurman International Airport, failed the test for colour and aluminium levels.

Bromochloromethane is a chemical that forms when chlorine reacts to organic matter in raw water. It has been flagged by the World Health Organisation as a possible carcinogenic.

Explaining why water colour matters, the WHO said in its guidelines: “Colour in drinking water may be due to the presence of coloured organic matter… or highly coloured industrial wastes. Drinking water should be colourless.

“For the purposes of surveillance of community water supplies, it is useful simply to note the presence or absence of observable colour at the time of sampling. Changes in the colour of water and the appearance of new colours serve as indicators that further investigation is needed.”

A week later, 15 testing points again failed safety standard tests on colour; two tested positive for high levels of bromodichloromethane and a few for high aluminium levels. This time around, the metro did not test for nitrates, compliance ratios, sulphates, fluorides, ammonia and chlorides as the testing equipment was out of order.

On 31 January, several samples again failed the standard test for colour. At Walmer 14th Avenue, the PH levels of the water were flagged as being outside acceptable levels. Several samples tested positive for levels of bromodichloromethane. Due to malfunctioning instrumentation, the metro did not test for nitrates, compliance rations, sulphates, fluorides, ammonia or chloride levels.

At the end of January, the metro flushed several pipelines in the city, saying that it was likely to solve the water discolouration issue.

In the week of 7 February, 21 samples taken from sites across the metro failed one of two standard tests for colour. For a second week, no testing was done for nitrates, compliance rations, sulphates, fluorides, ammonia or chloride levels.

On 14 February, the chemical quality of the water appeared to improve, with only a few samples testing beyond acceptable standards for drinking water.

On 21 February, E. coli bacteria was found in six samples from around the metro.

On 22 February — the day after a warning was issued to residents not to drink water straight from the tap, but to boil it or add bleach to it — a large number of samples again failed tests concerning colour and high levels of aluminium.

The source of the E. coli contamination of the city’s water network was identified as the Grassridge Temporary Water Treatment Works which was set up as a drought relief measure.

City officials have indicated that an investigation into water quality issues in the metro was ongoing, with mayor Eugene Johnson vowing that there would be consequences if officials were found to have been negligent. DM/MC