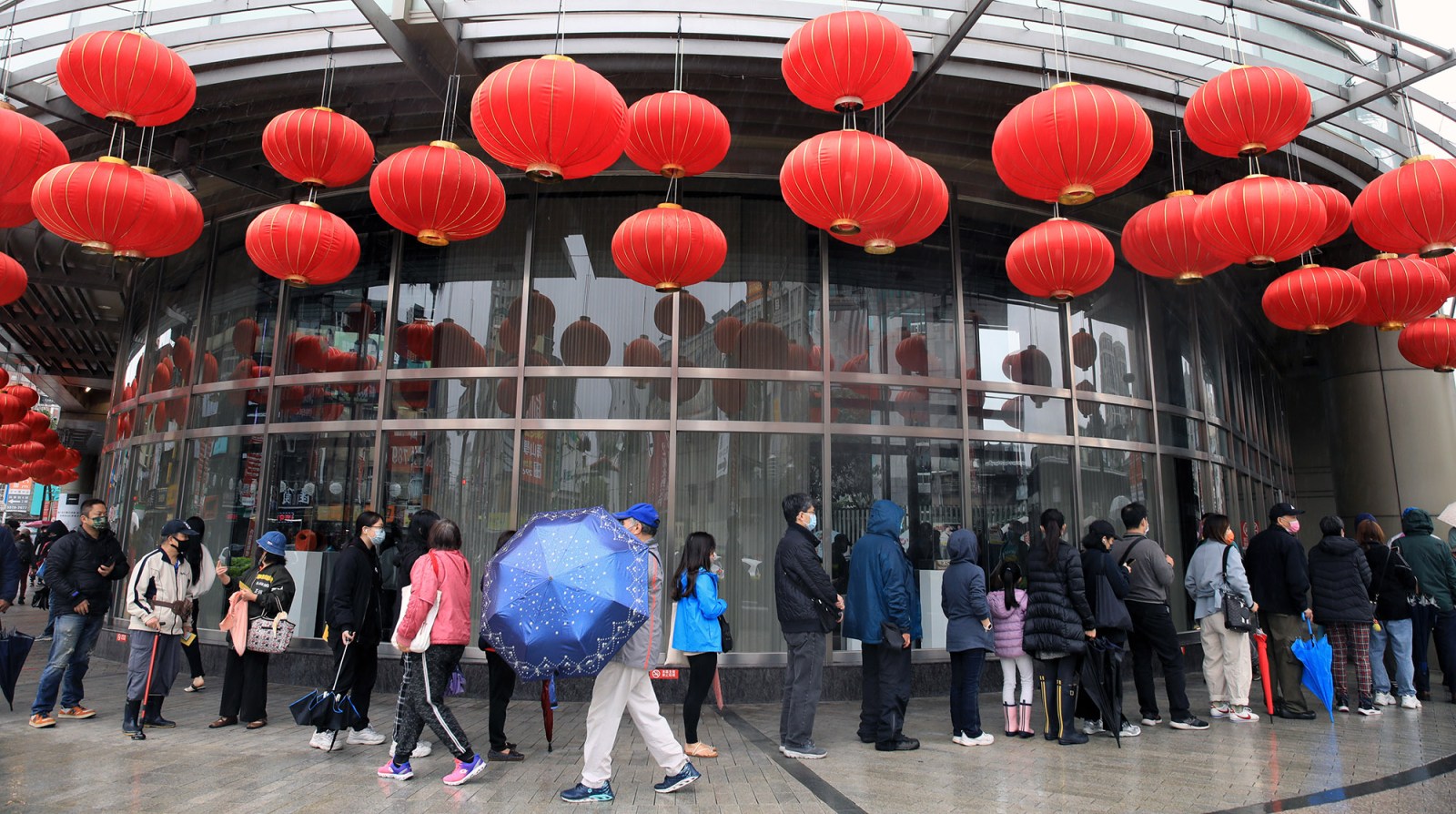 Members of the public wait in line outside a vaccination facility administering the Moderna Covid-19 vaccine at a shopping mall in Taipei, Taiwan, on 17 January 2022. (Photo: I-Hwa Cheng / Bloomberg via Getty Images)

Hong Kong’s plan to test the whole city three times in March is now in flux as pressure grows on the government to focus resources instead on addressing a Covid death rate that has surged to the highest in the world.

A Ming Pao report said Hong Kong is considering prioritising reducing Covid-19 deaths over the compulsory citywide test. A later report by the South China Morning Post said the city could postpone testing to April. A health official said at a regular briefing on Tuesday that details are still under discussion.

On Tuesday, the city announced 28,475 new Covid cases that were positive in a PCR test. Separately, health officials said a new website allowing residents to self-report positive rapid-antigen tests received more than 17,000 submissions, with about 14,700 considered valid – though the number covers results across March 6 and March 7 and weren’t included in the daily total.

Authorities reported 160 deaths, including a four-year-old girl announced Monday, with most fatalities elderly and unvaccinated. There are 74 patients in a critical condition in hospital and 105 in a serious condition. New modelling by researchers at the University of Hong Kong estimated cumulative deaths by May 1 will be 5,008 if there are no changes to transmission dynamics and interventions.

Hong Kong’s hair salons will be allowed to reopen on Thursday, provided they have a vaccine pass. Most physical-distancing curbs will be extended to March 23, including banning dine-in services at restaurants after 6pm and limiting multi-household gatherings on private premises. 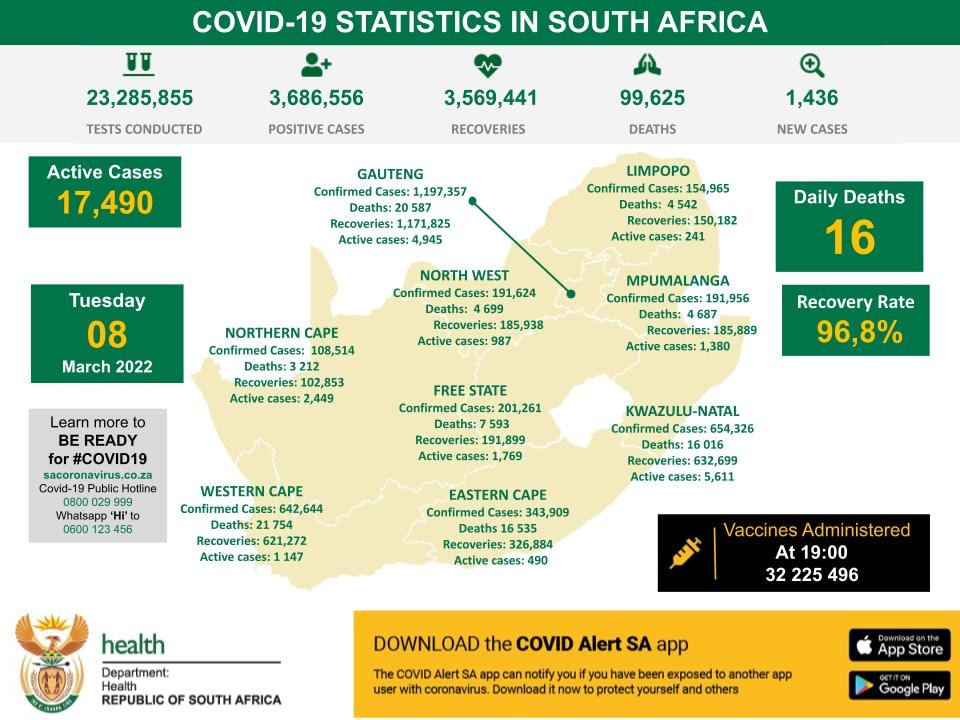 China saw its daily domestic Covid-19 infections topping 500 for a second day as Omicron caused multiple clusters across the country. The resurgence is the worst China has seen since bringing its initial outbreak centred around Wuhan under control in early 2020.

A total of 330 infections reported on Tuesday are asymptomatic, as Omicron quickly spreads among students in the eastern city of Qingdao and workers in the southern manufacturing hub of Dongguan.

The highly infectious variant also spawned a scattered spread in Shanghai, which has so far sought to contain the flare-up through targeted response and to refrain from mass testing, travel bans and lockdowns frequently used in other parts of China. Beijing also reported new infections on Tuesday amid the annual parliamentary meeting attended by lawmakers from across the country.

Zhang Wenhong, a renowned infectious disease doctor who advises the Shanghai municipal government on Covid control and treatment, said on his Twitter-like Weibo account Monday that implementing a Covid-zero strategy should not come at the expense of sacrificing normal life.

Shares of state-owned China Meheco shot up more than 50% in the past week amid speculation that the Beijing-based drug maker will be the local partner for Pfizer’s Covid-19 treatment pill.

China conditionally approved Pfizer’s Paxlovid last month, making it the first foreign pharmaceutical product that Beijing has endorsed for Covid-19. China Meheco is the only drug company that’s overseen by the central government, leading investors to bet that it will be the local distributor instead of a private company.

Australian business sentiment strengthened in February as an outbreak of the Omicron variant of coronavirus dissipated, easing supply-chain disruptions and reviving demand.

Business confidence jumped to 13 points from a revised four in January, recording gains across all industries, a National Australia Bank survey showed on Tuesday. Business conditions – measuring hiring, sales and profits –  climbed to nine points from a revised two to be back above its long-run average. The poll was largely concluded before Russia invaded Ukraine, NAB said.

Separately, according to the CommBank HSI Index report released in Sydney, Australia’s household spending intentions rose 1.8% to 107.3 from a month earlier in February.

Japan Business Federation, or Keidanren, the country’s largest business lobbying group, has asked that the government plan the nation’s exit strategy from the pandemic immediately, according to a policy paper it released on Monday.

The government should declare Covid is endemic as soon as possible and move on, it said.

Moderna readying for next pandemic

Moderna plans to start human trials for vaccines against 15 threatening viruses and other pathogens by 2025, part of a strategy to develop shots that could be made quickly in response to a future pandemic.

Hong Kong’s government is considering a “drastic shift” in its efforts to contain a Covid-19 outbreak by focusing on cutting the number of deaths as a top priority instead of compulsory mass testing, Ming Pao reports, citing an unidentified person in the government.

According to the Hong Kong Economic Times, about 260,000 people were queuing online to register with the government’s new platform for positive rapid antigen test results within the first four hours of its launch.

Hong Kong’s Securities and Futures Commission reminded securities firms to review and update their business continuity plan as the city faces the most severe outbreak since the pandemic began.

The regulator urged brokerages to start preparing now and considering the number of actions that may need to be taken ahead of a proposed citywide mandatory Covid-19 testing to ensure their operations will not be affected, according to a circular.

Businesses should critically review the impact of sudden disruptive events, including the possibility of staff shortages or reduced service offerings by essential vendors and service providers, as a result of positive cases identified during the mass testing.

The Hong Kong government is drawing up plans to require private hospitals to provide beds and designated clinics for Covid-19 patients in an arrangement similar to asking hotels to offer quarantine facilities, South China Morning Post has reported, citing an unidentified person.

Moderna’s shares have dropped by 50% this year as investors pulled back from Covid-19 healthcare stocks and staged a broader rotation out of growth names.

The biotech firm fell by 7.3% on Monday amid a broader market selloff and has erased $52-billion in value this year. Investors were concerned over the future revenue of Covid-19 vaccines and increasing competition in the space. The stock has fallen by about 74% from its record closing high of $484.47 set in August 2021.

Coronavirus cases in the US were little changed as compared to the same time on Monday at 79.3 million, as of 3.50pm New York time, according to data collected by Johns Hopkins University and Bloomberg News.

The national increase in cases matched the average daily increase of less than 0.1% over the past week. California had the largest number of confirmed cases at 9.01 million, a 0.1% increase from the same time the previous day

Florida Surgeon-General Joseph Ladapo said the state would recommend against vaccinating healthy children for Covid-19, a position that contradicts guidance from the US Centers for Disease Control and Prevention.

Sanofi to invest €935-million to develop mRNA vaccines in France

French drugmaker Sanofi plans to invest €935-million over the next few years to develop messenger RNA vaccines in France, a push into the technology behind some of the most effective Covid-19 shots.

Sanofi plans to spend the money through 2026 as part of a €2-billion  global investment programme announced last July to accelerate its mRNA strategy, according to a statement on Monday.

Sanofi is rushing to catch up with rivals like Moderna and the BioNTech-Pfizer alliance that generated tens of billions of dollars in revenue and saved lives by rapidly developing mRNA Covid vaccines.

US workers who went back to the office up to 38%

Workers who went to the office in 10 of the largest US business districts rose to 38% of pre-Covid-19 levels in the week ended March 2, according to data from Kastle Systems.

Employees who went to the office increased by 1.2 percentage points from 36.8% the previous week

In the week ending March 6, Italy reported 33,942 fewer new Covid-19 cases and 244 fewer deaths than the week before, according to data released by the Italian government.

Indonesia won’t require domestic travellers to show a negative test result for Covid-19 if they have been fully vaccinated, as the country continues to ease virus curbs.

The decision will be set out in a ministerial rule to be issued soon, said Coordinating Minister for Investment and Maritime Affairs Luhut Panjaitan, who oversees the pandemic response for Java and Bali. The government could lift all quarantine requirements for international visitors on April 1 or earlier if an ongoing trial in Bali proves successful, he added. DM/MC