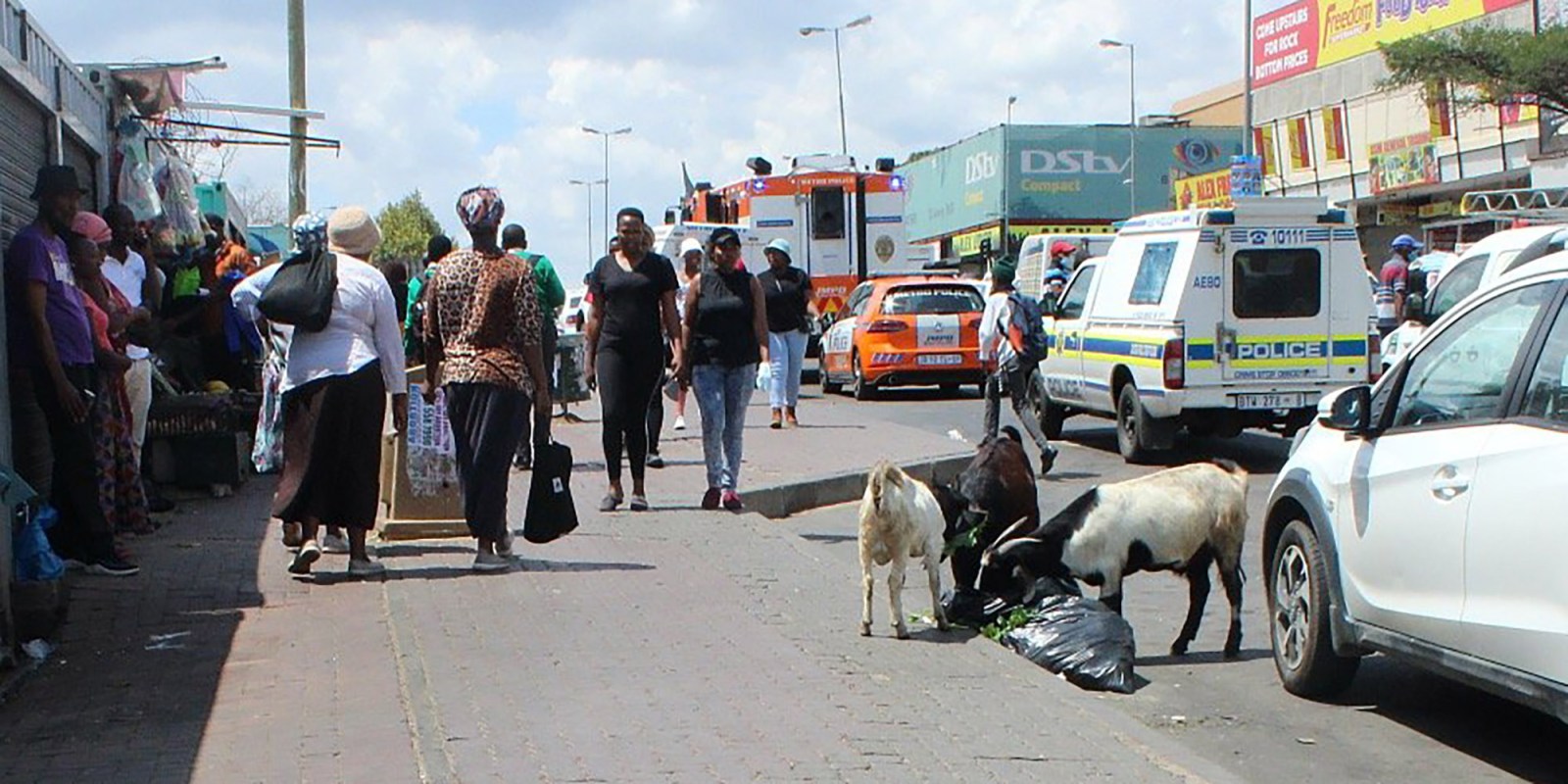 Nyalas and police cars were parked on Tuesday outside the Pan Africa Shopping Centre in Alexandra, the scene of clashes on Monday between immigrant traders and members of the Dudula Movement. (Photo: Masego Mafata)

Police maintained a heavy presence in Alexandra in Johannesburg on Tuesday following violent clashes on Monday between members of the Dudula Movement and immigrant traders and shop owners outside the Pan Africa Shopping Centre.

“I am relieved that the police are here because this is the first time in three weeks that I can open my shop without fearing for my safety,” said shop owner Ashi ul-Haq. His shop is across the road from the shopping centre.

Ul-Haq said people from the Dudula Movement had first told him and other immigrant shop owners in the area to close their shops and go back home three weeks ago.

Ul-Haq, who is originally from Pakistan, said this was the first time in his 26 years of running the shop that he had been told to leave.

On Monday the shop owners were told again to leave and there were clashes between immigrant shop owners and members of the movement.

SA Police Service (SAPS) Johannesburg Commissioner Major-General Max Masha said one person had been arrested on Monday for possession of a firearm and five people had been arrested for inciting public violence on Tuesday. He said they would appear in the Alexandra Magistrate’s Court soon.

A police Nyala, a Johannesburg Metro Police Department Nyala, and several police cars were parked on Tuesday along Watt Avenue, outside the shopping centre.

Many traders said they had been uncertain about setting up their stalls on Tuesday, in case their stock was damaged during the Dudula Movement’s actions. But some traders started to open their stalls around noon.

Ntshieng Letsoalo, a South African fruit and vegetable trader, said she had lost close to R900 by not trading yesterday. “I had three boxes of tomatoes which I needed to sell on Monday. I ended up having to throw them away,” she said. But she said she was in favour of “immigrant clean-up operations” in Alexandra. “We are suffering while foreigners live comfortably,” she said.

Alexandra resident Rose Ntuli said she was frustrated by congestion in the township, which she blamed on immigrants. “The sidewalks are usually packed with immigrant traders, making it difficult to walk and keep the place clean. Today is the first time that I’m seeing Johannesburg Metro Police Department conduct by-law enforcement because it is usually cramped here and now we can walk freely,” she said.

A group of eight fruit and vegetable sellers from Mozambique sat outside the shopping centre watching, unsure when they would be able to set up their stalls again. The traders asked not to be named out of fear for their safety.

“We have had no income for three weeks now. We don’t have money for rent and for food. This avocado that you see me eating now is one I picked up off the floor,” said one.

Another trader, who has been selling carrots, tomatoes, onions and potatoes on 2nd Street for the last 12 years, said when she tried to set up her stall recently, her stock was damaged by people who told her that she was not allowed there. She does not know if they belong to the Dudula Movement.

“We just want to work and put food on the table as South Africans do. Most of us here have passports. We are not here illegally. We are willing to work side by side with South Africans,” said another trader. The women said they don’t know when they will set up their stalls again.

Masha said police were relying on crime intelligence to keep abreast with what is happening in Alexandra. “We have the situation under control right now,” he said.

In the afternoon police fired several stun grenades to disperse a crowd that had formed at the bottom of Watt Avenue.

GroundUp tried to contact the leadership of the Dudula Movement but there had been no response to calls and messages by the time of publication. DM