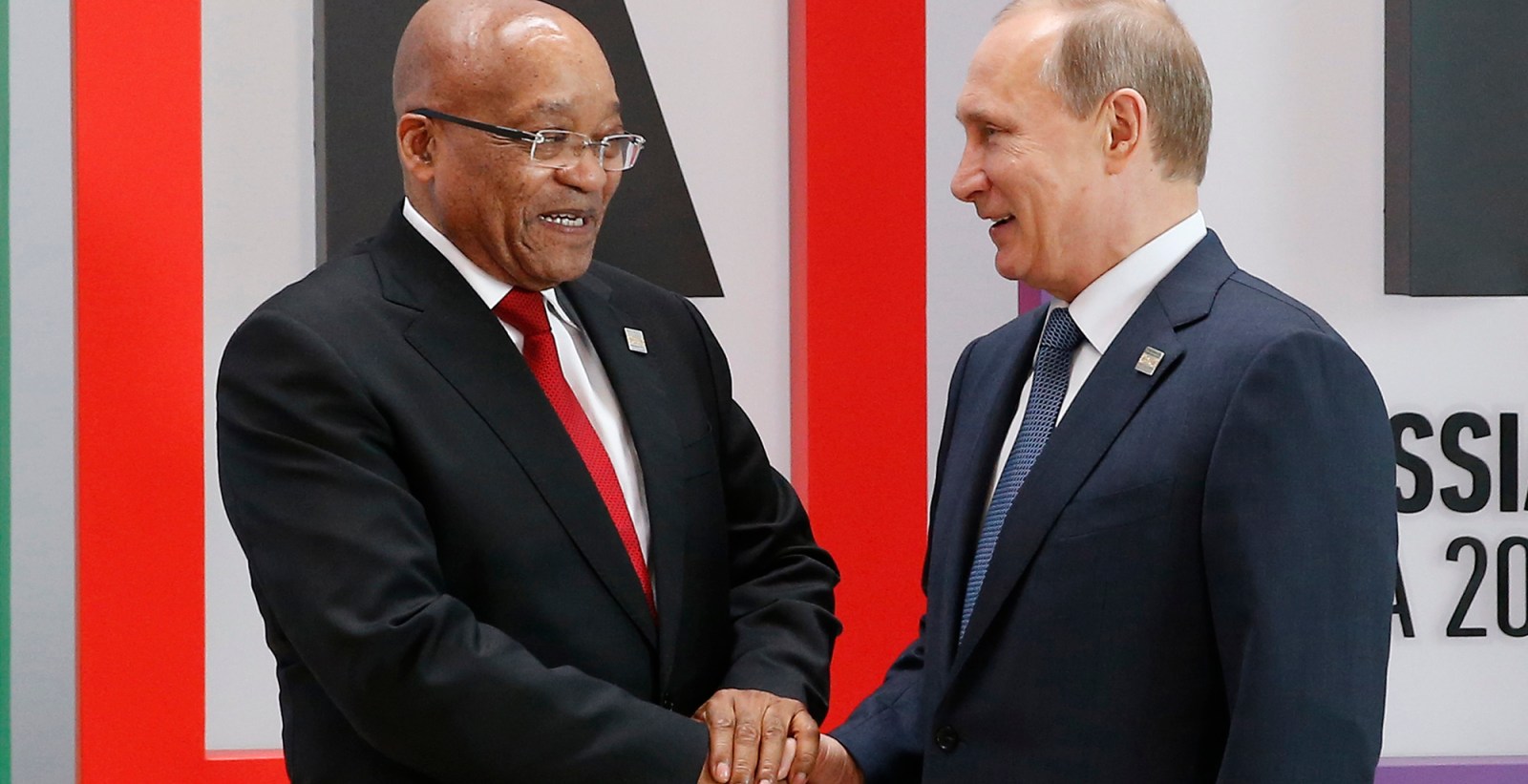 Russian President Vladimir Putin (right) greets then South African president Jacob Zuma during the welcoming ceremony at the BRICS Summit in Ufa, the capital of the Republic of Bashkortostan, Russia, on 9 July 2015. (Photo: EPA / SERGEI ILNITSKY)

As Russian forces continued their shelling of Ukrainian cities on Sunday, former president Jacob Zuma described Russian President Vladimir Putin as “a man of peace” whose actions were justified in response to the threats posed by the US, and Nato’s eastward expansion.

Zuma’s support for Putin was to be expected after South Africa abstained from a United Nations (UN) vote condemning Russia’s aggression, as parts of the ANC are reluctant to support the West’s response to the invasion, with other party allies blaming the conflict squarely on the US and the West.

A statement from the Jacob G Zuma Foundation, written after Zuma “felt it would be remiss of him not to exercise his constitutionally enshrined freedom of expression”, repeated Russian talking points that Putin expressed both before and after the invasion.

Like many other ANC members, Zuma reportedly received training in the then Soviet Union during the struggle against apartheid and he revived South Africa’s relationship with Russia during his 10 years as president, including joining BRICS.

Former finance minister Nhlanhla Nene told the Zondo Commission that Zuma fired him in December 2015 for refusing to approve a nuclear deal with Russia’s Rosatom, which it was estimated would cost R1-trillion.

A confidential document from 2014 that was leaked suggested the government had plans to award the deal to the Russian state energy company before other bidders had a chance to compete.

“The high-water mark for Russia-South Africa relations occurred during Jacob Zuma’s presidency (2009–2018),” said a report released by the Carnegie Endowment for International Peace in 2019.

The report said that in exchange for becoming a member of BRICS, South Africa “appeared to set aside some of its traditional principles – specifically, noninterference in the affairs of sovereign states, the inviolability of borders and opposition to regime change”.

In its statement on Sunday, Zuma’s foundation said Putin had been “very patient” with the West as he repeatedly explained that Nato’s eastern expansion was a threat to Russia. Ukraine’s Parliament has resolved to work towards joining Nato but there are no signs it will join in the near future.

Zuma’s foundation went further by dismissing Ukraine’s sovereignty: “Surely, in terms of efforts to achieving world peace, the sovereignty of Ukraine and all the democratic dictates cannot mean allowing Nato to establish a presence on its real estate, thus establishing an untenable risk to Russia.”

The foundation continued to argue that the US had invaded states it perceived as threats and that Western countries had hypocritically united against Russia while either leading hostile forces in the past or ignoring previous conflicts.

The foundation said it appeared “justifiable” that Russia was “provoked” and it was “quite fortunate” that Putin had the capacity to respond.

Ignoring the extensive negotiations in the lead-up to Russia’s invasion and Russia’s ongoing failure to adhere to a ceasefire to create humanitarian corridors, Zuma urged Ukrainian President Volodymyr Zelensky to negotiate.

“I am certain that His Excellency President Vladimir Putin will reciprocate and bring all in his power to make peace a reality, as I know him to be a man of peace who has worked hard to ensure peace and stability in the globe,” said the former president.

Calls for SA government to condemn Russia’s invasion of Ukraine

Zuma did not mention Russia’s shelling of residential areas, the already 1.5 million people who have become refugees, or Russia’s alleged use of the internationally banned cluster bombs.

His comments come after South Africa abstained this week from voting on a UN General Assembly resolution condemning Russian aggression and calling on Russia to immediately withdraw its troops from Ukraine. Shortly after the invasion, the Department of International Relations and Cooperation issued a statement calling for Russia’s immediate withdrawal.

The country has stepped back from that position, reportedly after President Cyril Ramaphosa’s intervention, and has recently called for peace through dialogue and mediation, a backtrack clearly aimed at appeasing Moscow and ANC leaders who are cautious of appearing pro-Western.

Some scholars have supported the position, pointing to the UN and the West’s double standards on international conflict.

“The point in terms of the morality of this issue is that the bombing of Ukraine is totally unacceptable but so is the 70-year occupation of Palestine, and so is the bombing of Iraq, so is, to get back to Palestine, reduction of Gaza to rubble… the Saudis are bombing Yemen.”

The SA Communist Party noted the racism reported by minorities fleeing Ukraine and called Nato the “primary aggressor” in the conflict, blaming Ukraine, Nato and the US for the violence meted out by Russian troops.

For some leftists, the Russian illusion of socialism, which has long given way to kleptocratic and authoritarian nationalism, remains a rallying point against the dominance of the US and western Europe.

For others, that the traditional centres of capitalism and imperialism (ignoring Russia’s current efforts) are against Russia is a rallying point.

Zuma’s support for Putin goes beyond ideology. His foundation’s statement said he was removed from office as state president before he finished his term “by the Western forces using their forces that they are in control of within some structures of our government, and some that they control in the ruling party”.

Zuma resigned as South African president under pressure from the ANC in 2018 after Ramaphosa won the party presidency months earlier. In 2008, former president Thabo Mbeki was pressured to resign before the end of his term by Zuma’s ANC faction in a similar fashion.

“In whose interest was this done?” the foundation asked, suggesting it was the same forces trying to bring down Russia with sanctions. DM