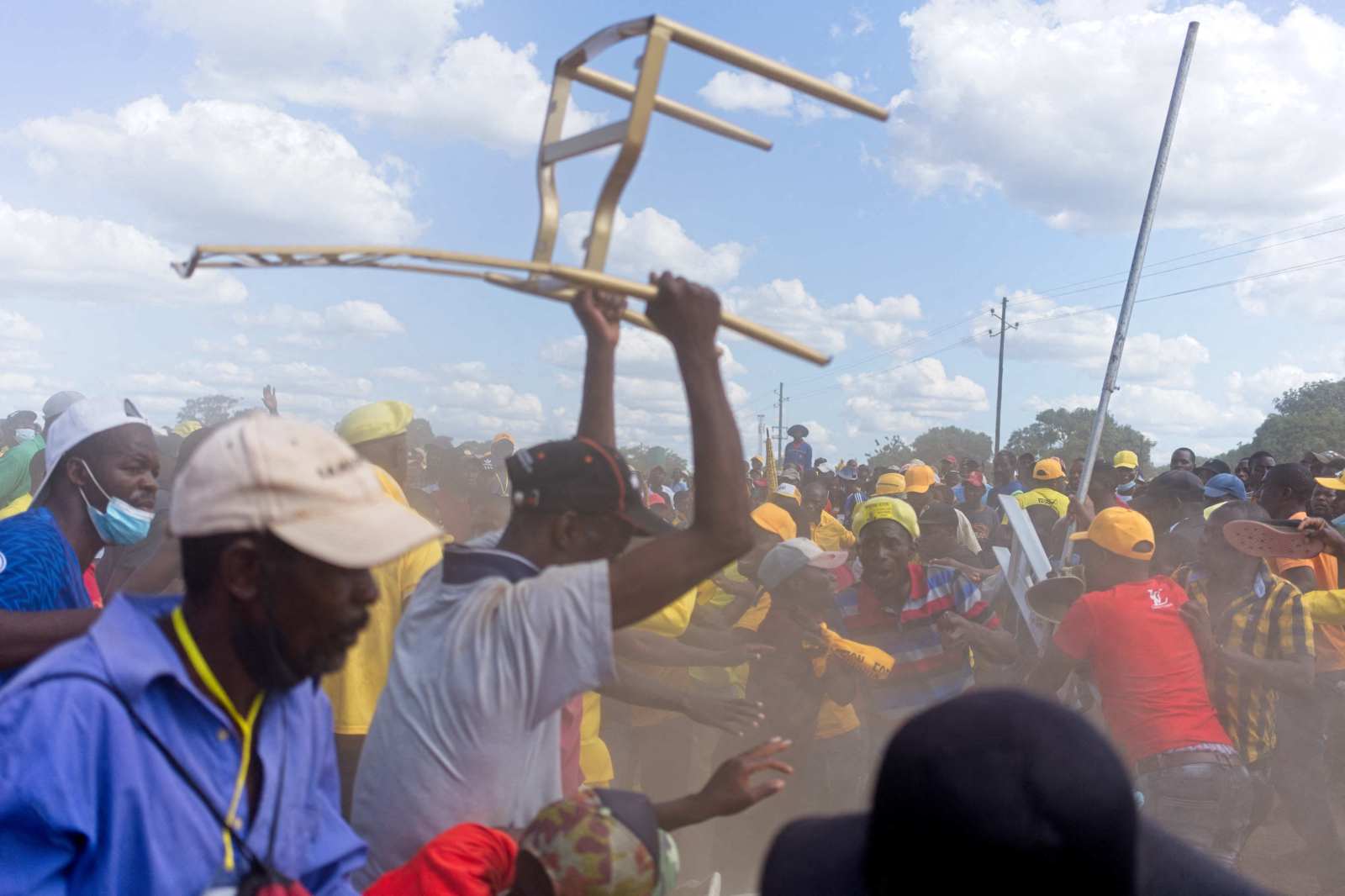 An alleged supporter of Zimbabwe's ruling Zanu-PF brandishes a chair as he attacks supporters of the opposition Citizens Coalition for Change during their election rally at the Mbizo shopping centre in Kwekwe on 27 February 2022. (Photo: Zinyange Auntony / AFP)

Zimbabwe’s political situation has plunged to new depths as the president’s ruling Zanu-PF party is being accused of ‘gangsterism’ by the main opposition Citizens Coalition for Change ahead of the 26 March parliamentary by-elections – charges that the 79-year-old leader denies.

President Emmerson Mnangagwa is accused of using violence against his opponents. Citizens Coalition for Change (CCC) leader Nelson Chamisa also accuses Mnangagwa of using state media to demonise him and his party ahead of the polls. The Zimbabwe Electoral Commission has set up a multiparty liaison committee to deal with all electoral issues in the run-up to the polls. The opposition has also accused the electoral body of bias towards the ruling party.

Chamisa had to be whisked away by his aides as violence reached fever pitch. He told reporters that one of his supporters later died of injuries sustained during the skirmishes, while 23 others were admitted to hospital with severe injuries. A day before this incident, anti-riot police had teargassed Chamisa’s supporters in Gokwe, forcing CCC supporters to disperse before Chamisa could address them. This was despite a high court order allowing the campaign rally to proceed after police had banned the gathering for “lack of manpower”.

Meanwhile, in Harare’s satellite town of Chitungwiza, another CCC supporter, Agatha Mujati, suffered head injuries on 28 February after she was allegedly attacked by suspected Zanu-PF members at her house.

Zimbabwe Republic Police national spokesperson Assistant Commissioner Paul Nyathi said police had arrested 16 people in connection with the Kwekwe violence. However, only five suspects were arraigned before court facing murder and public violence charges. They were remanded in custody until 15 March.

A leaked police memorandum showed that most of the Kwekwe suspects were Zanu-PF members who were nabbed at a lodge owned by former state security minister Owen Ncube, who was recently dismissed from his ministerial post by Mnangagwa for allegedly setting militia on fellow party members ahead of Zanu-PF provincial elections.

A day before Chamisa’s supporters were attacked in Kwekwe, Mnangagwa’s deputy, Constantino Chiwenga, who led the military in 2017 to force Robert Mugabe to step down, had told Zanu-PF supporters that his party would not allow Chamisa to win state power in general elections due next year, declaring that Zanu-PF was ready to “crush the party (CCC) like lice” and referred to Chamisa as “Little Goliath”.

The Kwekwe incident happened as other CCC activists had to fend off Zanu-PF supporters who had allegedly petrol-bombed a tent set for an opposition rally in Chitungwiza town.

CCC vice-president Tendai Biti’s Harare house was attacked on Wednesday night, 2 March, by unidentified men wielding a gun and axes. The assailants assaulted Biti’s security guard and allegedly warned the guard that they wanted to kill Biti who was not present at the time of the attack.

Said Chamisa: “A government that uses weapons against its own citizens is wicked; this is the only country in the world where you find a government sponsoring, instructing and initiating murder and violence to transact politics (and) sponsoring terrorism.”

However, Zanu-PF information director Tafadzwa Mugwadi was quick to dismiss Chamisa. “President Mnangagwa has repeatedly told politicians and ordinary Zimbabweans to shun political violence but we have opposition leaders who incite people to engage in violence that they do not participate in,” said Mugwadi.

“Zimbabwe is in the hands of gangsters; it’s a gangsters’ paradise,” said Chamisa. “We need this country to be a paradise of citizens who want freedom and peace. Roadblocks were all over as we went across the countryside. Every police roadblock was punctuated by a Zanu-PF roadblock but there were no arrests.” Chamisa has repeatedly called for key democratic reforms, although his calls are falling on deaf ears. DM168